Could media messaging do more for shark conservation?

Sharks face several threats every day, but one that doesn’t make the headlines are the headlines themselves. How sharks are portrayed in mainstream media is often misleading, inaccurate and commonly directed towards a single risk factor. This form of biased and repetitive reporting could be doing more harm than good. 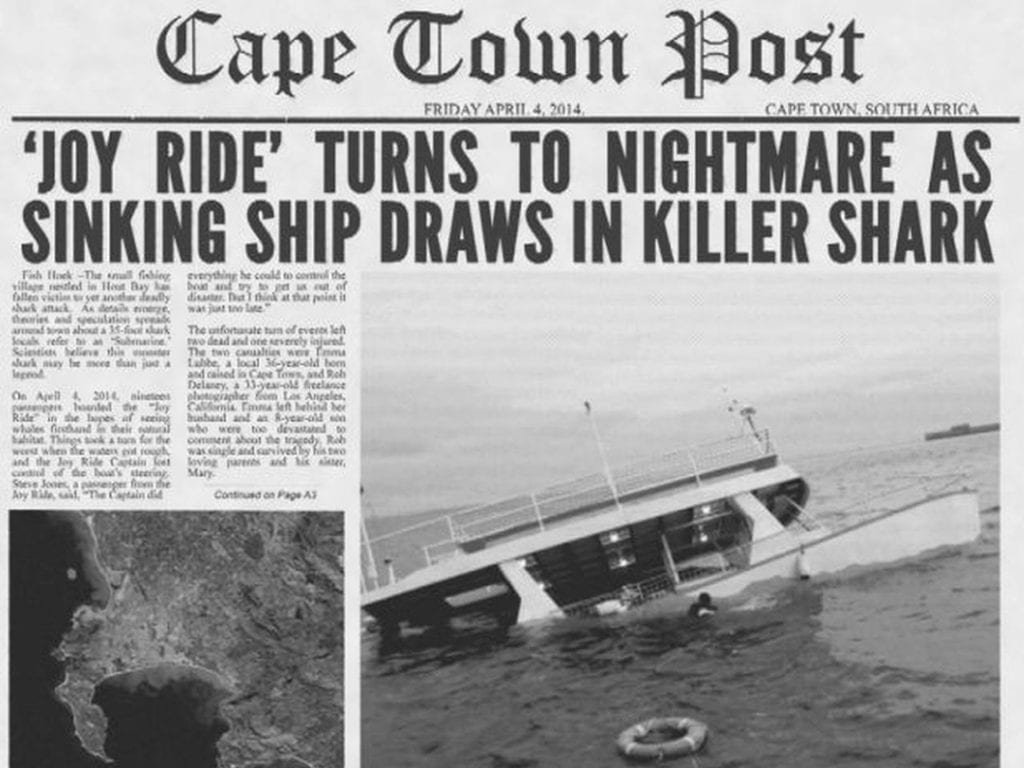 Dr David Shiffman understands this better than most and has published a thought-provoking paper analyzing nearly 2000 press articles written on the subject over the last decade. The study aims to identify ‘[if] problems and solutions were covered factually and accurately in a way proportional to how big of a problem they are, and how workable the solution is.’ Shiffman, who recently won an award for performing research of public interest and relevance found that media coverage around sharks is ‘frequently presented in an oversimplified, biased, or factually inaccurate manner that would likely contribute to a widespread public misunderstanding about these topics.’

With non-scientist conservation advocates working for NGO’s being the most common messengers. Alarmingly, less than 10% of all the articles analyzed had their focus on new scientific research, recent governmental or non-profit reports, or violations of existing conservation policies. 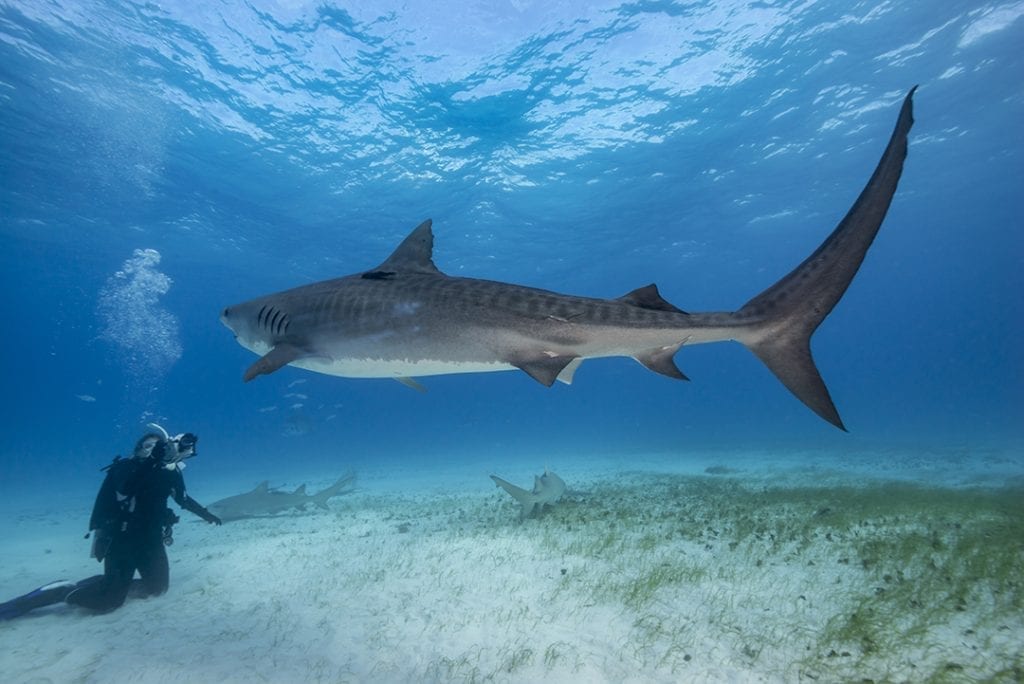 A diver videos a large tiger shark as it swims overhead during a shark dive in the Bahamas. Photo © Wildest animal | Shutterstock

The fact that just 1.1% of the nearly 2000 articles mentioned a shark species on the ICUN Red List shows us that the real risks faced and what solutions and policies are needed for long term conservation efforts are not being addressed. The majority were stories on ‘popular’ species such as Great White, Whale Shark and Hammerhead Sharks, with the lions share citing finning as the biggest threat to population decline. This sort of ambiguous reporting misdirects concern and leads to calls for an absolute ban on commercial fishing without taking into account the livelihoods that would be lost and that the biggest threat to sharks is, in fact, unsustainable over-fishing. 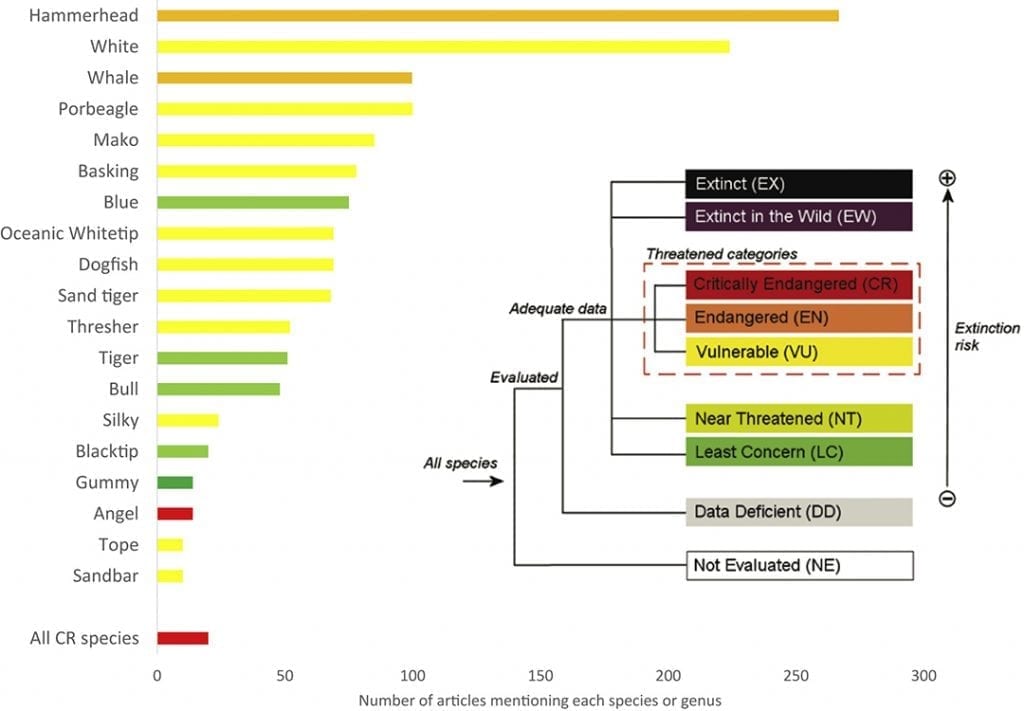 Figure 2. Species Mentions by Threat Status The number of articles that mention specific shark species, genera, or families (e.g., hammerhead, mako, dogfish, angel), color-coded by IUCN Red List status. Red represents an assessment of “Critically Endangered,” whereas Green colors are not threatened (either Near Threatened or Least Concern). Inset: Schematic diagram of the IUCN Red List Categories, with extinction risk increasing toward the top. Red List assessments are valid as of 2018 when the analysis was conducted. Image © David S. Shiffman et al.

The truth of the matter is that people learn about complex environmental issues and their solutions from the media. However well-intentioned, if the data and the messaging are not presented factually and carefully, it could seriously undermine the support of policies necessary for a sustainable symbiosis between man and the life in our oceans. If the same problems and solutions continue being presented, anyone trying to learn more will inevitably raise the same standstill commentary. 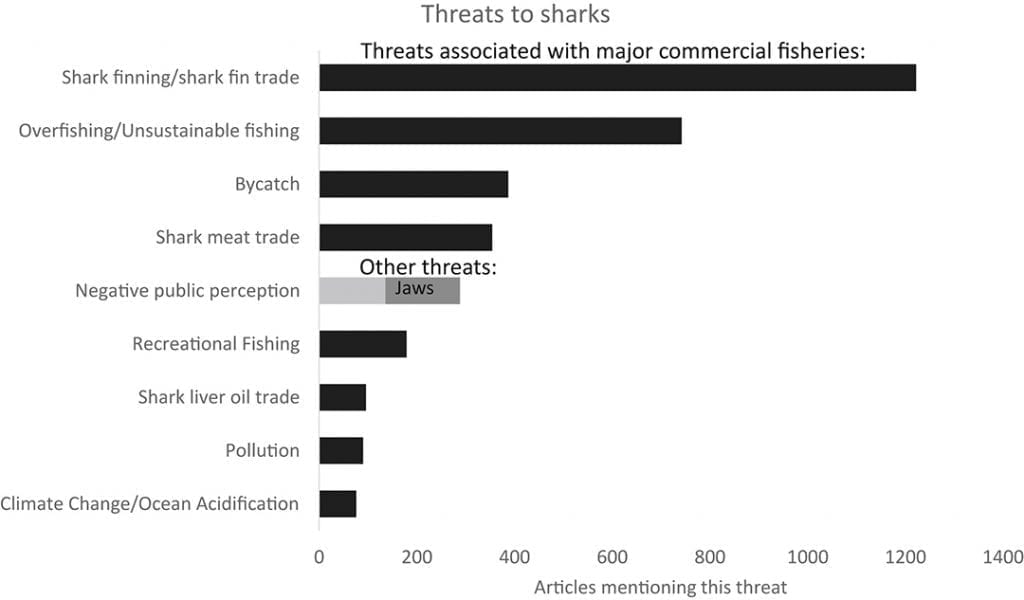 Figure 3. Mentions of Threats The number of articles mentioning threats to sharks, categorized by threats associated with commercial fisheries and “other threats” (including comparatively minor threats as well as emerging threats). Mentions of the negative public perception of sharks are broken down into those specifically mentioning the film “Jaws” and those that do not. Recall that overfishing as a category includes bycatch, shark finning, and the shark meat trade and is the single most dominant threat to sharks globally. Image © David S. Shiffman et al.

Shiffman and his colleagues have put together a valuable research paper, directed at non-experts with a clear introduction to the reality of threats faced by the species and how the press tends to get it wrong. You can read ‘Inaccurate and biased global media coverage underlies public misunderstanding of shark conservation threats and solutions’ here, and follow Dr Shiffman on Twitter.