In 2014, Bryan Keller was based at the Bimini Biological Field Station (the Shark Lab), to study the behaviour of juvenile lemon sharks. His project was funded by Save Our Seas Foundation, and earlier this month his research was published in the Journal of Experimental Marine Biology and Ecology. We caught up with him to ask a few questions about how friendships develop among little lemon sharks.

Sharks do not have a reputation for being social or having complex social dynamics, especially when compared to mammals. Can you explain how we understand the significance of social structure in sharks in comparison to, say, dolphins?
As far as we can tell, dolphins are a lot more social than sharks and have more complex relationships with one another. Quite recently, researchers showed that bottlenose dolphins essentially have their own ‘names’ – a signature whistle – which they respond to in a playback experiment when called. Sharks have not been shown to do anything this advanced, but their social structure is far from random. A few years ago, researchers in French Polynesia found that groups of sharks essentially form social cliques, kind of like in high school where you have the band kids and the jocks. These students go to the same school and have opportunities to interact with each other, but choose not to engage outside their own social groups. For a previous study at Bimini, researchers watched the same pairs of lemon sharks over multiple seasons. Out of all the sharks the individuals could associate with, they chose to interact with their ‘friends’ from the year before. These interactions are not random and I wanted to figure out what was driving the behaviour. 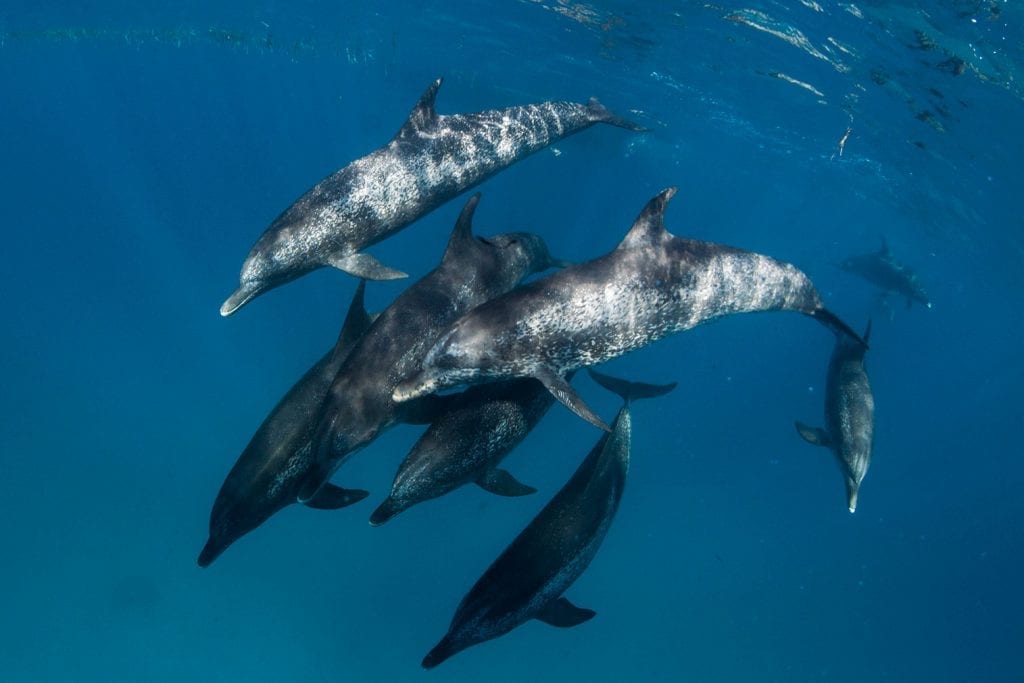 How did you run your experiments?
We captured 23 juvenile lemon sharks from the mangroves at Bimini and separated them into four holding pens. You could think of those pens as different classrooms where sharks were forced to interact, so they could essentially ‘get to know each other’. For our trials, we took two sharks from one ‘classroom’ and introduced them to two sharks from another and recorded their swimming behaviour on video. Then we went back to the lab and watched the videos to determine whether the ‘classmates’ spent more time with each other than they did with the other sharks, which would suggest familiar preference.

What did you observe once the sharks were taken out of the pen full of ‘familiars’?
When the sharks were introduced, they started following each other or swimming in parallel – an awesome sight. I imagine a similar thing would happen with two classes of schoolchildren who were isolated from each other for one school year. If at the end of the year, they were introduced again in the playground, they would most likely associate with their familiars or classmates. This is what we found with the lemon sharks. They preferred familiar individuals over strangers.
For our trials, we had to make sure that all sharks were essentially the same size. Small sharks tend to prefer to follow slightly larger sharks. We think it is because they want to learn from a more experienced individual, like a second grader wanting to hang out with the ‘big kids’. In 2013, my colleague Tristan Guttridge showed that sharks can learn from each other. He trained sharks to touch a target placed in the water. Sharks that had never been trained to carry out this action could learn how to do it just by watching a shark complete the task in front of them. 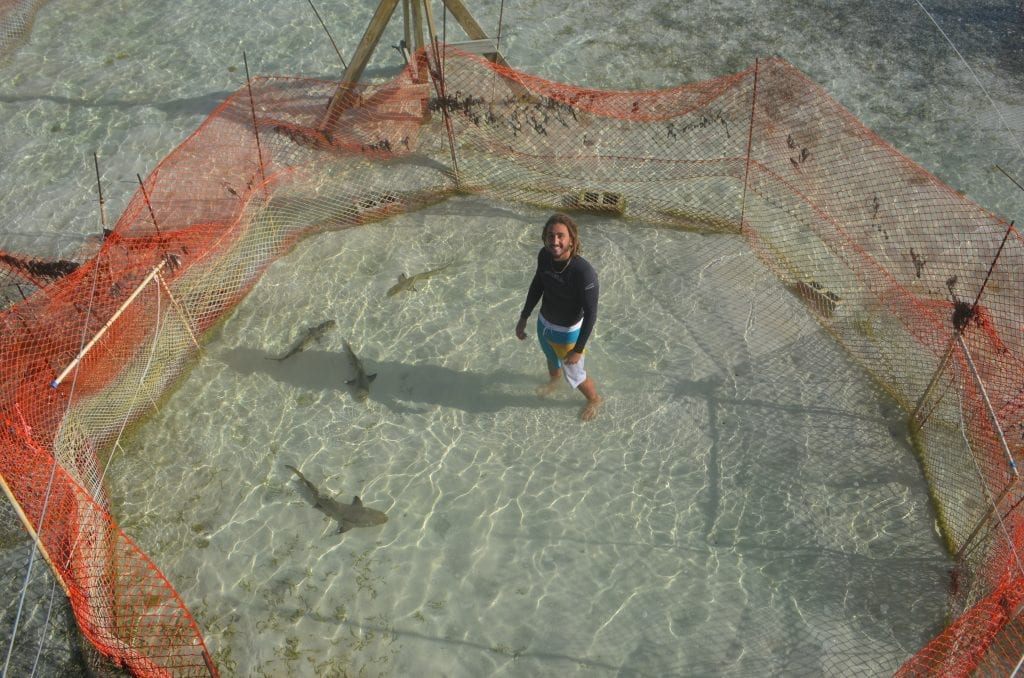 How long did sharks continue to display preference for a ‘friend’?
Our trials took place over two months and as they progressed, the preference for familiars, or ‘classmates’, grew in strength. Why would the bond between two sharks strengthen over time? Let’s go back to the example with the schoolchildren. The reason kids show a preference for each other is that they spend time together. The more time children, or sharks in this case, spend together, the stronger their bond will be. This means that on our first day of trials, animals were far less familiar than they were by the end. These results have been documented in many other studies involving familiarity and we were not too surprised by what we found. 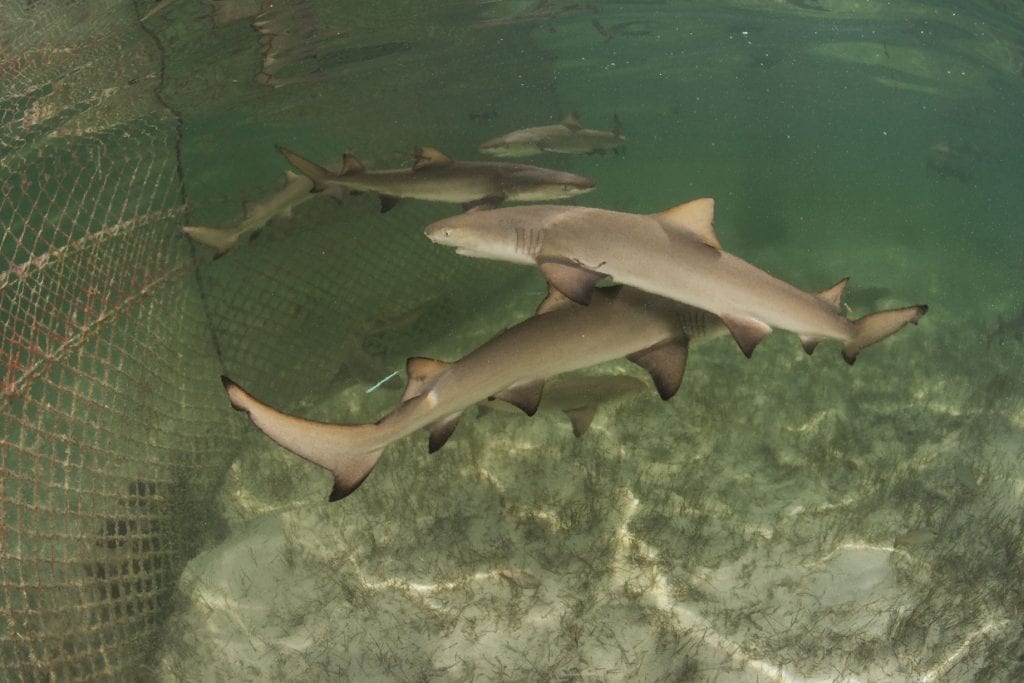 Trials took place over two months and as they progressed, the preference for familiars, or ‘classmates’, grew in strength. Photo by Shin Arunrugstichai.

Do you think any of these sharks will continue to recognise some of their ‘familiar friends’ later in life?
The purpose of this study was to determine whether familiar preference could affect social interactions in the wild. A previous study at Bimini documented the same pairs of sharks interacting over a two- to three-year period. In this situation, we believe these sharks were interacting with each other because they were ‘familiar friends’. It is possible that the sharks would forget each other, but that depends on how long each animal’s memory is.
The length of time for which sharks are capable of remembering familiar individuals depends on whether they are able to recognise each other individually or only differentiate between categories (familiar or unfamiliar). Categorical recognition would be similar to a young child being able to distinguish between children and adults based on their size rather than their individual identity.

This might be a ridiculous question, but do you think familiarity might play a role in which individuals lemon sharks choose to mate with?
Our trials were conducted with juveniles, so we can only guess how familiarity might affect mate preference. This topic has been investigated by other researchers and the results are surprising. Female guppies, a commonly studied fish, were shown to prefer unfamiliar mates. This seems counterintuitive after learning about the benefits of associating with familiars, but we believe it’s all about genetic diversity. Choosing unfamiliar mates increases the genetic pool and decreases the chance of inbreeding. However, it is possible that lemon sharks would prefer familiars because females always want to mate with males of high quality and compatibility. If increased levels of familiarity enabled females to make this assessment, then familiar males may be preferred. For now, though, we don’t have those answers. 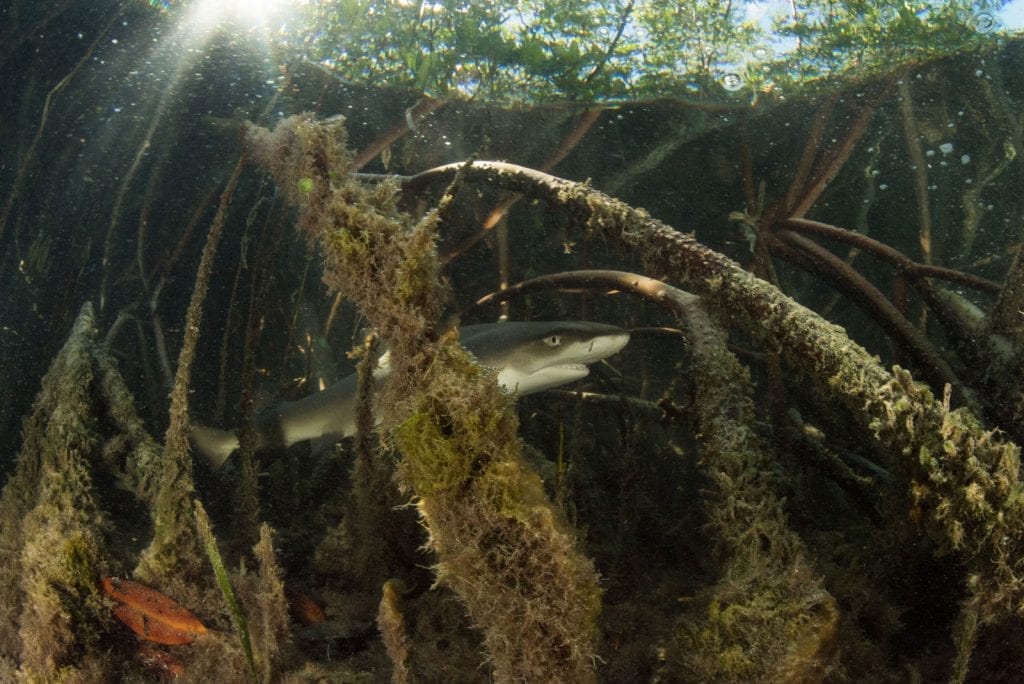 The purpose of this study was to determine whether familiar preference could affect social interactions in the wild. A previous study at Bimini documented the same pairs of sharks interacting over a two- to three-year period. Photo by Shin Arunrugstichai

What does this mean in terms of how we understand the lemon shark moving forward? Can you elaborate on what you mean by ‘evolutionary adaptability’?
As I said before, future studies can investigate whether the sharks are capable of individual or only categorical recognition. Since we now know that sharks do prefer familiars, we can also study how they recognise each other. For example, are they using smell or vision? The mode of recognition will most likely vary between shark species.
Evolutionary adaptability is an animal’s ability to reproduce successfully and thrive in the face of environmental challenges. The fact that lemon sharks prefer familiars means they developed a behaviour to increase their overall success by coping with environmental challenges. Sticking with familiars may have helped them with difficulty in escaping predators or catching food, which would be a testament to their evolutionary adaptability.

Bryan wants to remind readers that it is generally not a good practice to explain animal behaviour by comparing it to human behaviour. However, the basis of much of our behaviour is rooted in the animal kingdom. Humans think of friendship as wanting to spend time with someone based on shared values, but at a much simpler level this preference could be initiated by familiarity. For example, very young children don’t have friends based on shared life goals or political viewpoints; their friends might be on the same sports team or live close by, which all leads to increased familiarity.