Even in the abundant waters of the Western Indian Ocean marine predators are experiencing cataclysmic declines. It is estimated that in excess of 90% of all marine predators have already been lost from the oceans. This is almost entirely due to overfishing and research suggests that more than 30 million sharks are killed every year.

Sharks are particularly vulnerable to fishing pressure because they are long-lived and slow growing. They only become sexually mature many years into their life and produce few pups at a time. They do not reproduce every year. 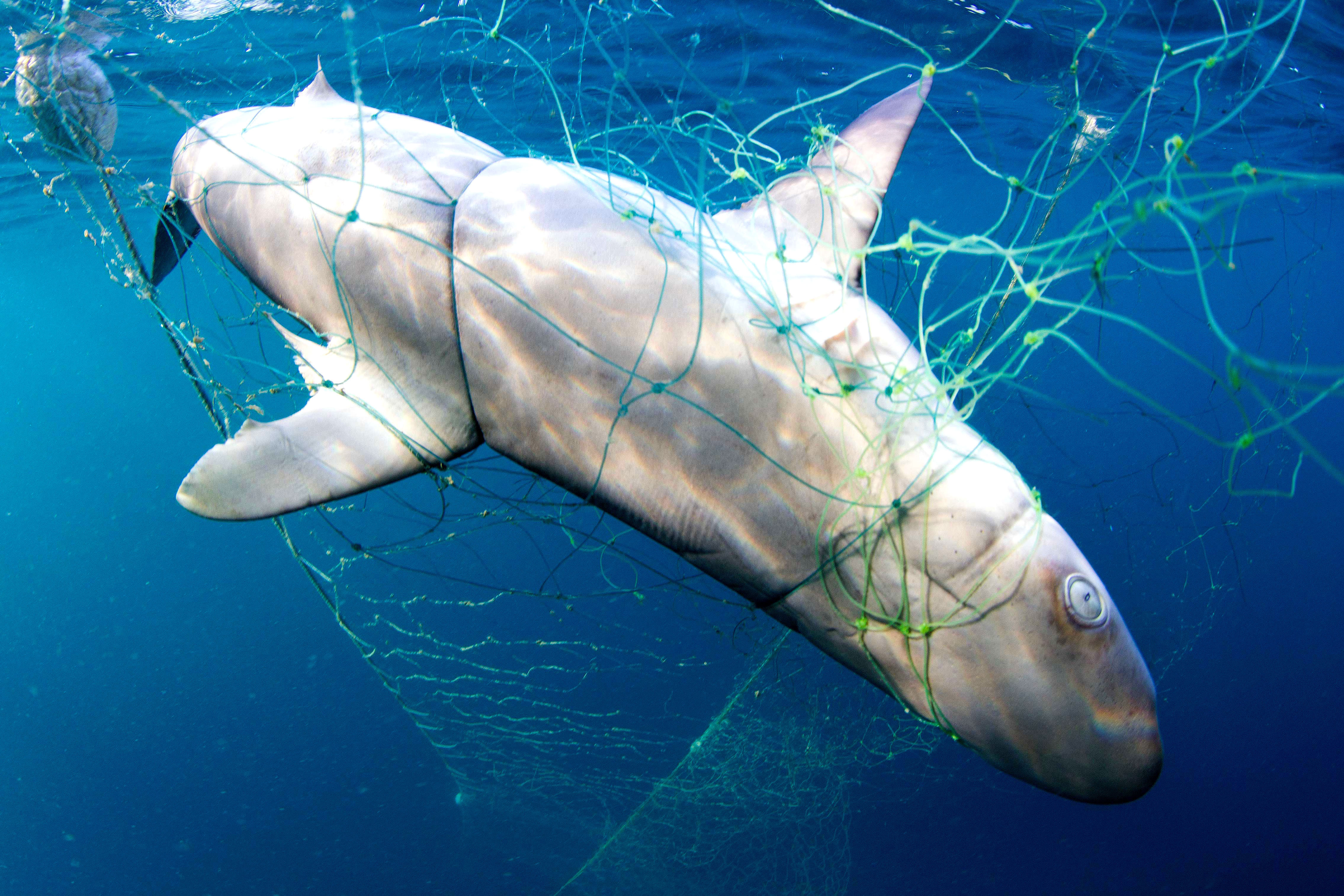 A silky shark entangled in a gill net off the coast of Madagascar. Photo by Garth Cripps.
To read more about shark fishing in Madagascar go to:

The disappearance of these masters of evolution is very bad news for every animal that’s linked to the oceans, including ourselves. Predators, like sharks, have substantial influence on the structure and function of ecological systems, both directly by regulating prey populations and indirectly through the interactions between their prey and other members of the ecosystem. Sharks are found in nearly all ocean habitats and form many connections within food-webs because they are highly mobile and have varied diets.

Too see an example of how apex predators regulate ecosystems watch: https://www.youtube.com/watch 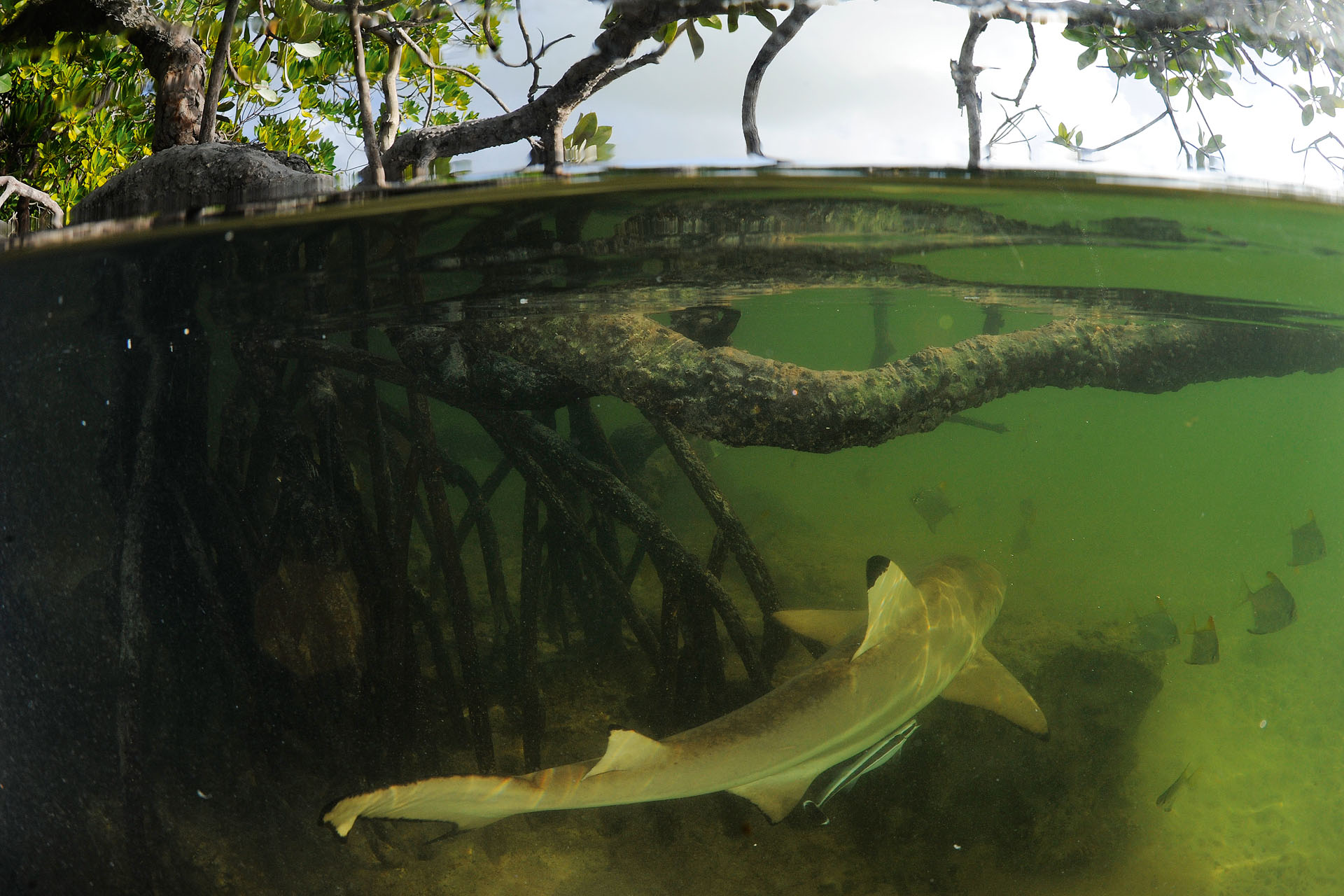 A blacktip reef shark weaves through the tangled maze of a mangrove forest on Europa Atoll. Sharks only reproduce a few young at a time and nursery areas like mangrove forests are essential for their pups. Blacktips are classified as near threatened by the IUCN. 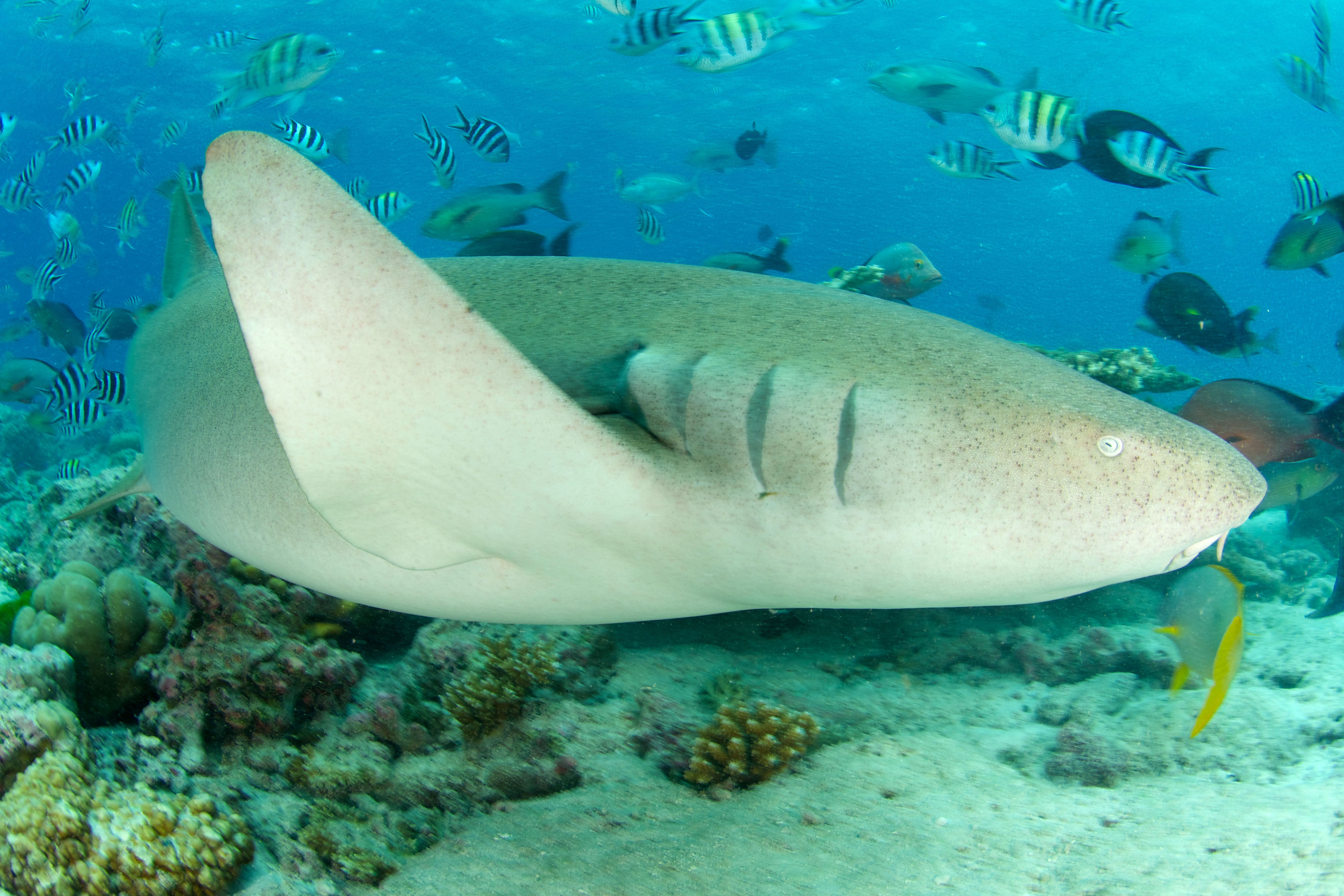 Tawny nurse sharks are primarily nocturnal and have a remarkable ability to change colour between grey and sandy brown depending on the colour of their surroundings. These sharks are listed by the IUCN as vulnerable because they are restricted to shallow habitats that are heavily fished. Nurse sharks are already extinct in some areas of Thailand and India. 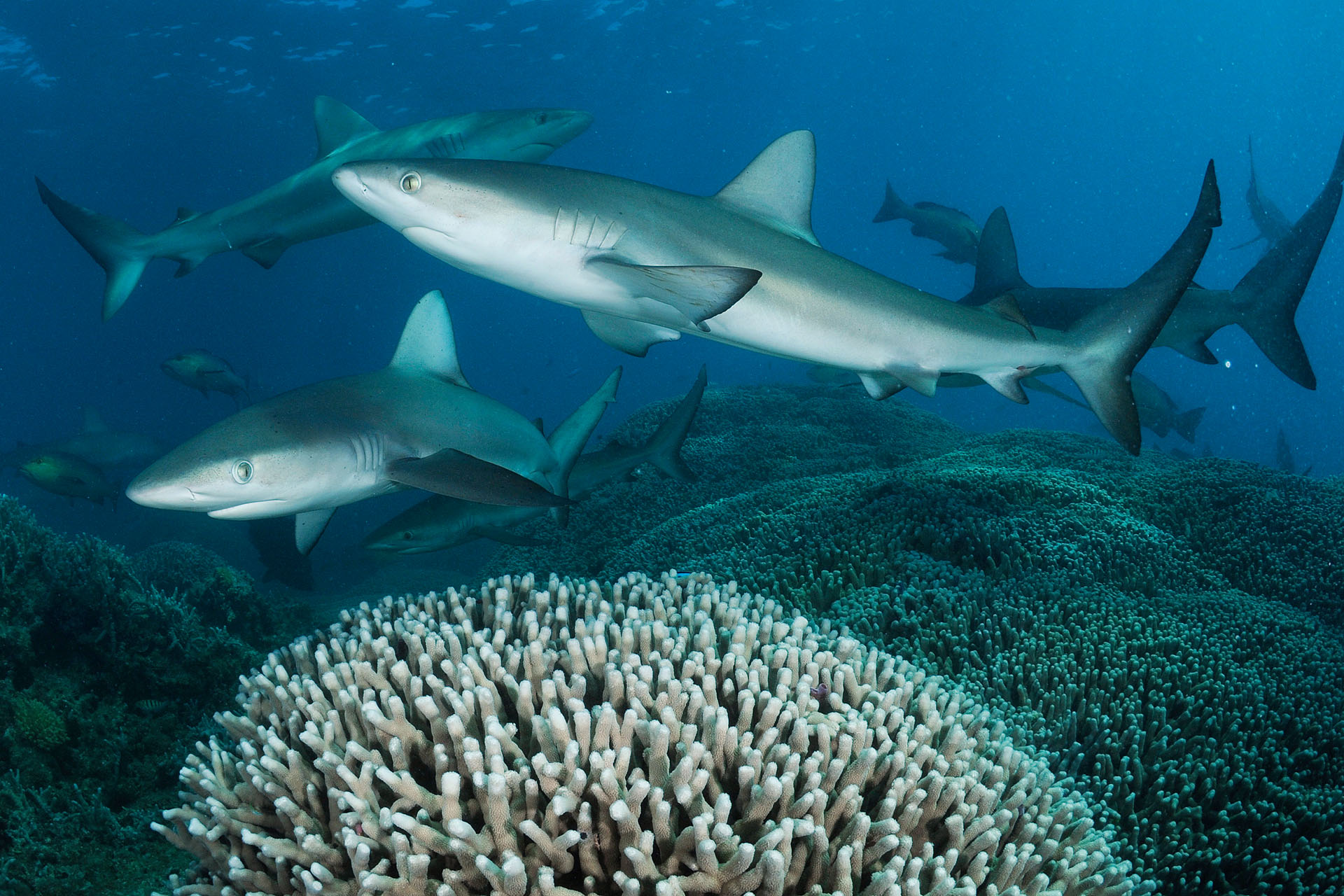 Galapagos sharks are named after the famous islands where they were first identified. These large sharks can grow to 3.7m and are listed as near threatened. They first reproduce at around ten years of age, and are known to live to approximately 24 years old. Masses of juveniles congregate in the lagoon at Bassas Da India. 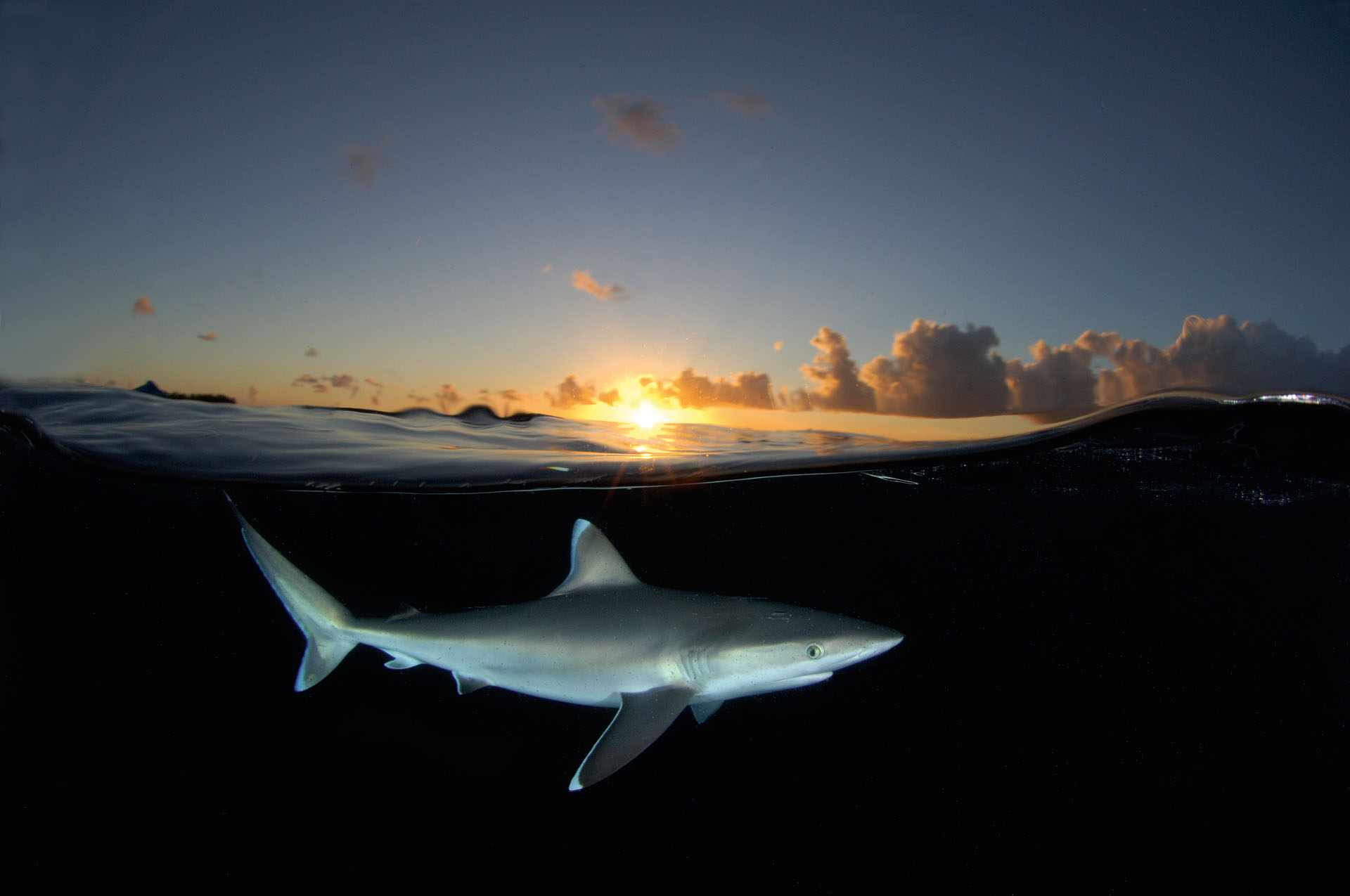 Silvertip sharks move into shallow water at dusk and patrol the edges of coral reefs. They influence food webs by feeding on reef fish and eagle rays. They are classified as near threatened. 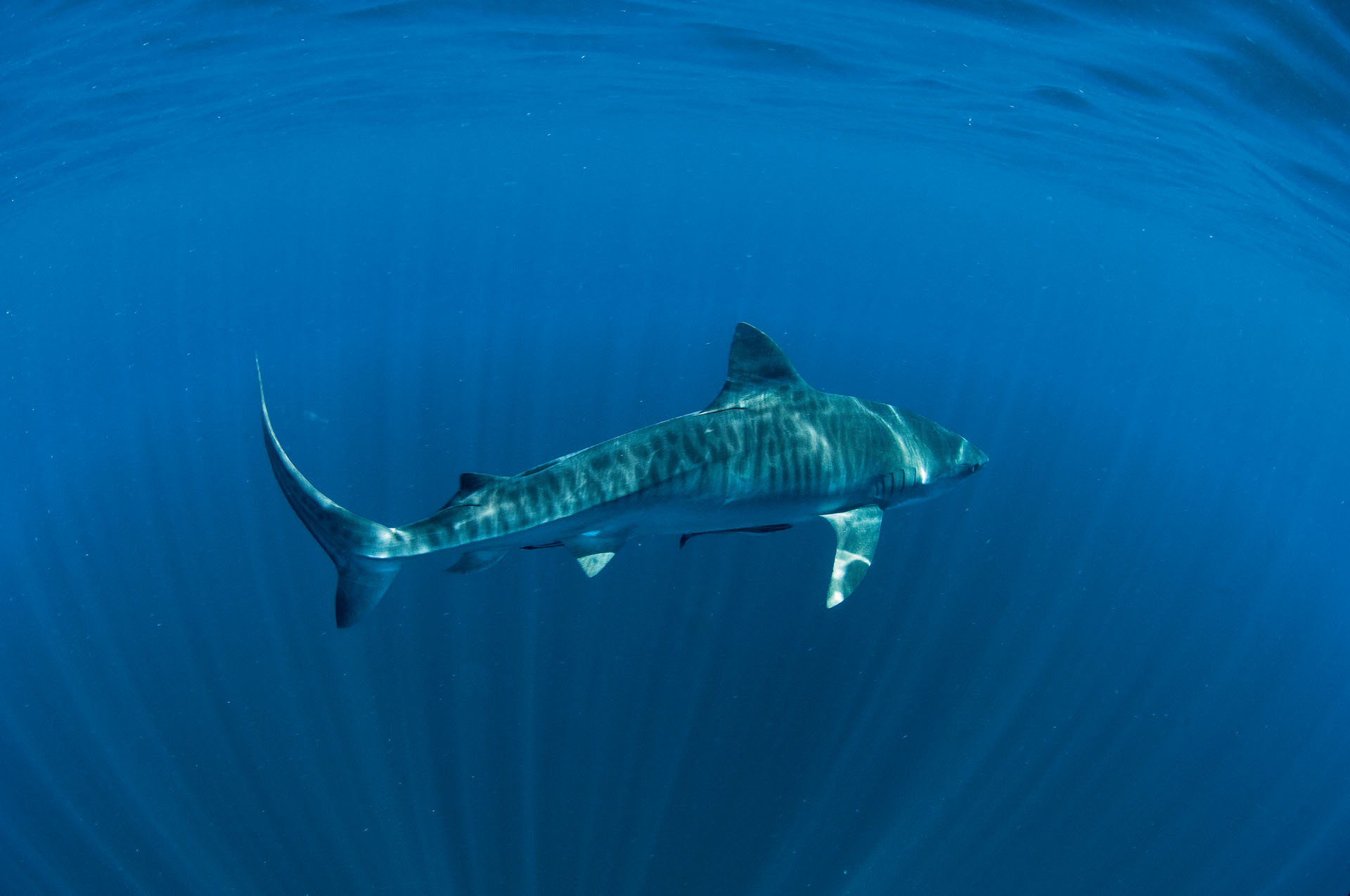 Tiger sharks, once thought to be coastal predators, are revealing that they spend much of their time in the open ocean. Like many shark species, the fins of the tiger shark are highly prized in Asia for making “shark-fin soup”. Fortunately, it is a fast growing animal that has large litters of pups making it more resilient to exploitation. It is currently listed as near threatened. 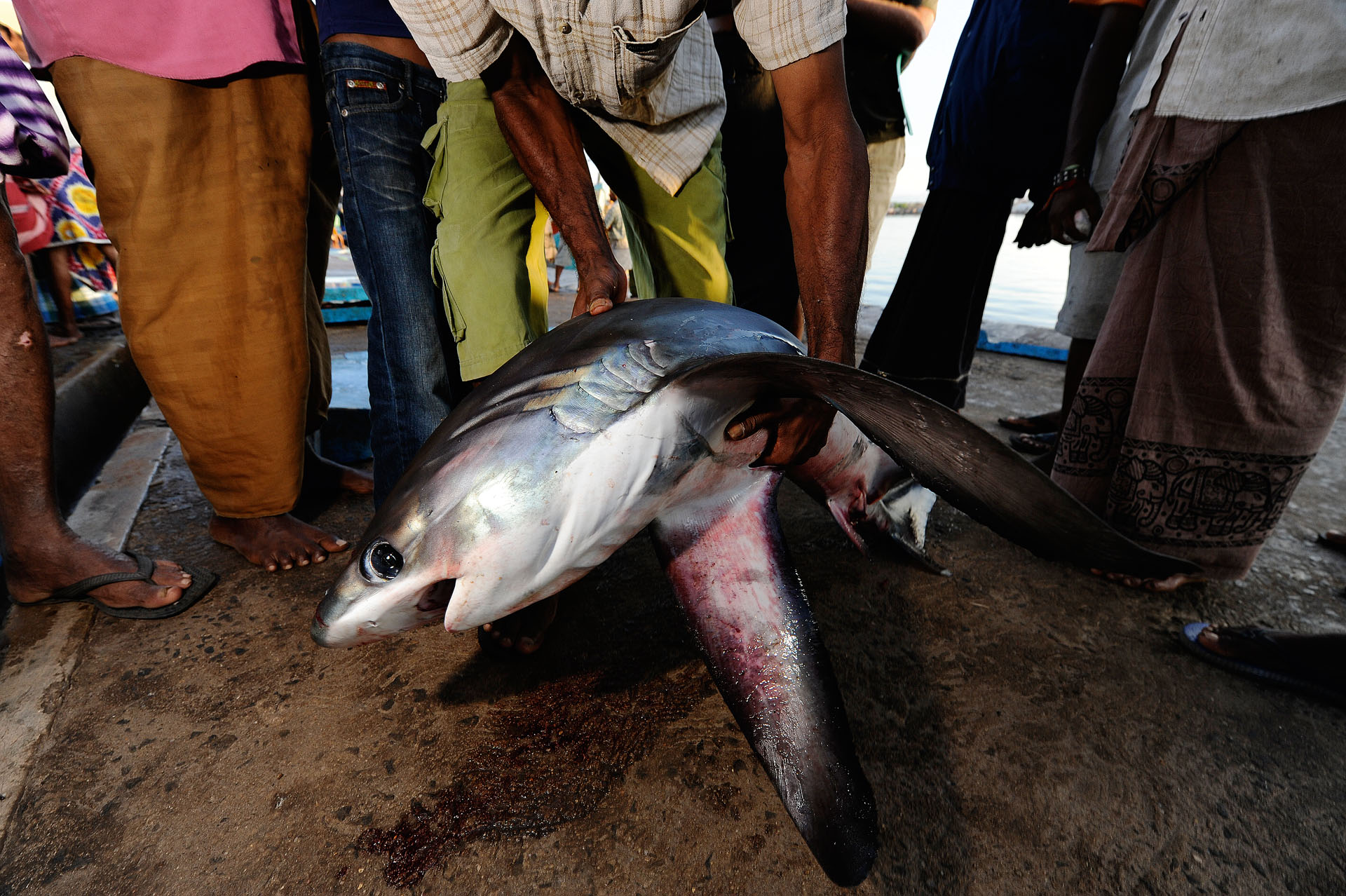 A Sri Lankan fisherman lifts a dead thresher shark, a species that reaches maturity at between seven and 14 years of age and has limited resilience to fishing pressure. They are listed as vulnerable by the IUCN.