Since September 2009, Palau is the world’s first shark sanctuary.

With half of the world’s oceanic sharks at risk of extinction, conservationists regarded this move as "game-changing". The sanctuary comprises about 600,000 sq km (230,000 sq miles) of ocean, an area about the size of France.

President Toribiong also called for a global ban on shark-finning, the practice of removing the fins at sea.

"The need to protect the sharks outweighs the need to enjoy a bowl of soup", said President Johnson Toribiong. As many as 73 million sharks are killed each year around the world.

"These creatures are being slaughtered and are perhaps at the brink of extinction unless we take positive action to protect them," said President Toribiong. "Their physical beauty and strength, in my opinion, reflects the health of the oceans; they stand out."

In Palau, the Save Our Seas Foundation works with the Micronesian Shark Foundation in a tagging and education project.

Since August, the fact that Palau is a shark sanctuary is made clear to every visitor by a large photo board near customs. The picture is made by Save Our Seas CEO Peter Verhoog and the board displays the logos of Save Our Seas Foundation and the Micronesian Shark Foundation. 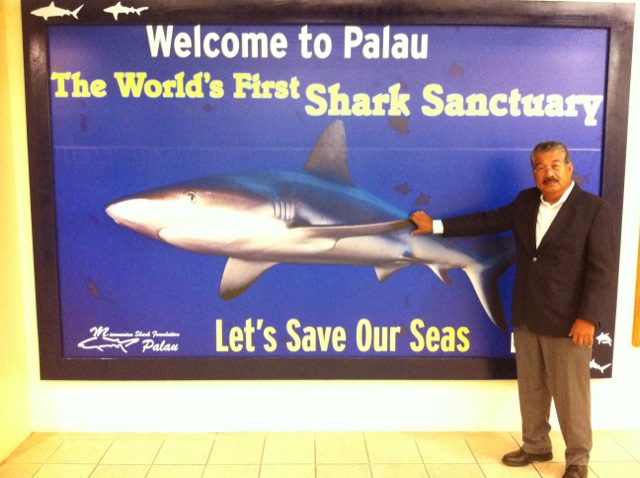 President Toribiong and the Shark Display