96 hours of filming across False Bay.

Nearly 2 months on permanent standby for good-weather days and calm sea conditions (a killer for any reasonably normal day-to-day life, trust me!)

We’ve completed our first major survey of the Bay in winter … so, it’s back to the office to analyse hours of footage, sift through countless field guides and fish identification books and re-engage the statistical side of my brain!

But first, for your benefit, a quick catch-up … 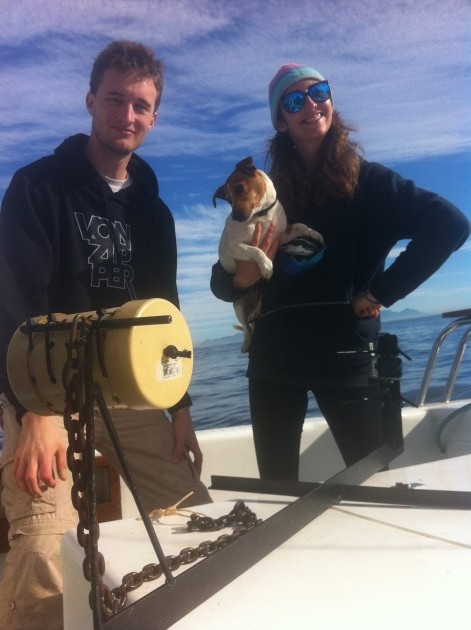 Ralph, myself and Mojo the seafaring Jack Russel take a quick breather between samples

A whirlwind 2 months in False Bay:

A major first step in this project was accurate mapping of False Bay, and the designation of sites across the various habitats represented in the area. For this purpose, I had some data courtesy of the Council for Marine GeoScience and SAEON, which we used to identify different regions of reef (Table Mountain sandstone, Malmesbury shale, granite), sand and kelp beds. Once mapped, I divided the Bay into 9 zones (which made field sampling easier, because we’d tackle one zone per day) and plotted 100 sites across the Bay (representing the various proportion of each habitat). I also calculated which slipways were most cost-effective to use, depending on which zone we were sampling, as well as the fuel and boat costs to run to each site, each day. And here I thought I would get away with forgetting maths after high school …

Our next step was prepping our equipment. This involved my racing around Cape Town in a small Corsa bakkie loaded to the hilt with all sorts of sea-going paraphernalia. Sourcing affordable, practical equipment is no small task. For quite some time, I was probably the only girl in Cape Town doing shopping sprees that saw me staggering out of stores loaded with chain, rope and stinking boxes of sardines. No Prada or Jimmy Choo bags here!

With navigation sorted, and maps in order, the cameras charged and loaded with memory cards (and the boat groaning with spares of everything, from buoys to rope and cable ties!) it was a matter of sourcing good weather days (reasonable visibility, calm seas with as little swell as is feasible in False Bay in winter (!!) and minimal wind) before heading out to sea. Of course, this region didn’t earn the infamous title “Cape of Storms” for no good reason … and I can assure you that we have spent our fair share of sodden, rain-soaked and seasick days on the ocean in our quest to collect these data! 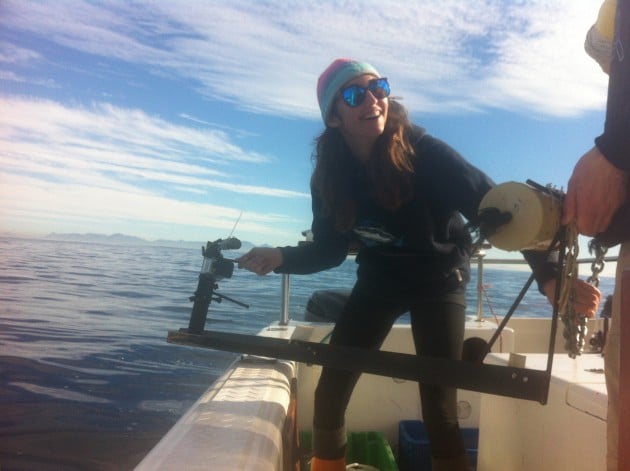 I prepare to lower a BRUV into the ocean

A new addition to our project arrived in the form of MSc candidate in Applied Marine Science, Ralph Watson. Currently working on his MSc at the University of Cape Town, Ralph’s particular interest lies with the sharks in the Bay. Ralph will be taking on a segment of this overall False Bay project, focusing on the cartilaginous fishes (sharks, rays and skates) and joined me in the field to help with what turned out to be a lot of rope-pulling and bait-preparation … If Jacques Cousteau ever made marine science look glamorous, a day spent prepping sardines for the bait canisters will quickly rid you of that notion!

A few of our days at sea also allowed us to introduce the ocean to some high school learners, and one intern from the Shark Centre, who were keen to job-shadow some marine scientists as part of their work experience. I think much laughter and some wonderful sightings of whales, seals and pelagic seabirds kept seasickness at bay and sent some enthused teenagers home, hopefully inspired to study marine biology! 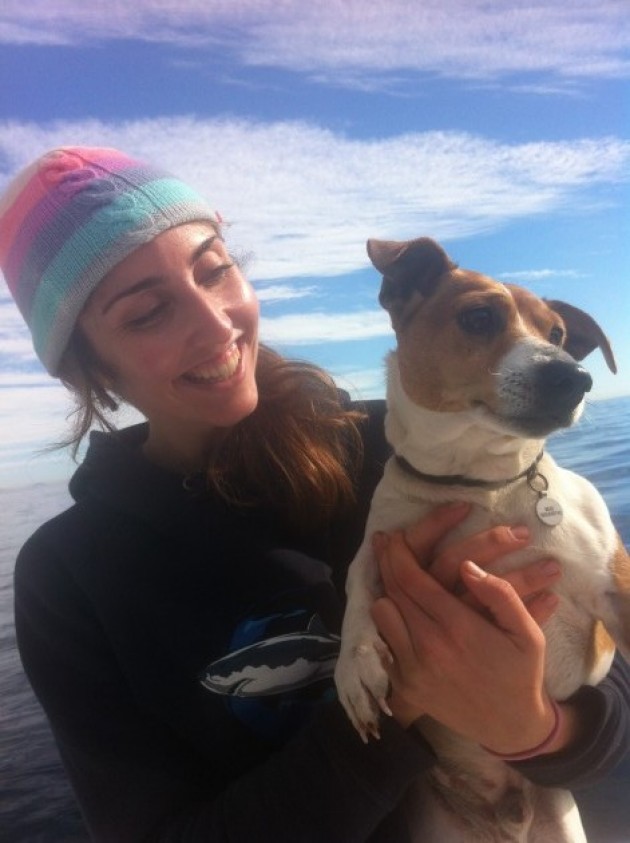 My personal favourite addition to the boat was, of course, Mojo the seafaring Jack Russel. I’ve known Mojo over the past few years from UCT Marine Ecology camps spent on Gareth Beaumont’s boat “Tyler” in Struisbaai. Whilst Mojo isn’t quite as handy with the ropes as my other field assistants (thanks Kieron, Wayne, Ralph, Steve, Bjorn, Steven, Kas, Tome and Marc – all willing helpers who flexed their muscles to haul those BRUVs to the surface … sometimes from as deep as 40m!), he was keen to nose in on our bait operations and provided much on-board comic relief!

Balancing fieldwork and the Real World:

It’s no mean feat committing to two full months’ fieldwork, which translates to “permanent standby, should the ocean decide to behave”! In the midst of days at sea, equipment repairs and data downloads, Colin and I gave a talk at the Shark Centre’s Speaker Series. Here, I revealed the first of our winter footage samples in a short film which I will upload in my next blog.

The next few months will see us reassess our BRUV rig and better develop it so as to further improve the quality and quantity of data we collect. Additionally, I will be surveying one site each month from August through to January next year to assess long-term variability.

So, you can be sure to look out for some videos and photos to be uploaded here regularly over the next little while!