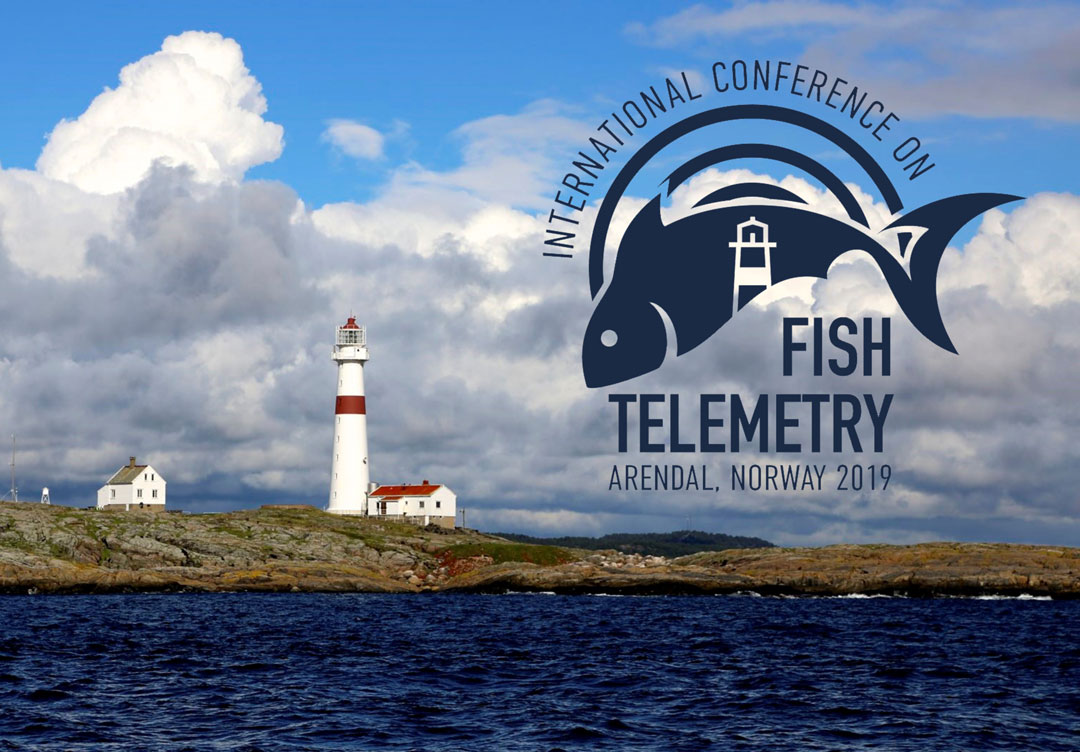 “Flights and accommodation are booked!” I declared excitedly to my colleague.

“Hmm?” She replied distractedly, not glancing up from her keyboard. “What for? Your holiday to the UK?”

I rolled my eyes. “No! For the ICFT!” I said, all but clapping my hands together with excitement.

That got her attention – and she burst out laughing. “Oh yes, your fish conference. It truly amazes me that anyone would get excited to talk about fish for an entire week”.

My knee-jerk reaction was to be offended, but then I thought back to a similar conversation I’d had not long before this, with a friend who was completely ecstatic over an upcoming conference on marine sponges. I realised that I had been equally incredulous that someone would find a bunch of sessile filter feeders so fascinating. And don’t get me started on anyone who is obsessed with botany – plants are just not up my street. But what struck me is that there are so many of us out there – our niches may be spread widely across countless different fields, but there is one thing we all have in common: we are unabashed nerds.

Now I must have a short, nerdy gush about the conference (I apologise if your eyes glaze over somewhat). The official title of my “fish conference” was the 5th International Conference on Fish Telemetry, which was held in the beautiful town of Arendal, on the south-east coast of Norway. Telemetry is a fairly well-known tool in marine science, but for those who are unfamiliar with the term, the official definition is “the collection of data at remote or inaccessible points and their automatic transmission to receiving equipment for monitoring”. So, basically, the use of devices such as satellite and acoustic tags to track the movements patterns and behaviour of various species – in this case, fish. Acoustic telemetry is the primary method used by our research team at Shark Spotters, and through collaboration with other researchers and the national Acoustic Tracking Array Platform (ATAP), it provides a powerful tool that allows us to track shark species at a national scale. 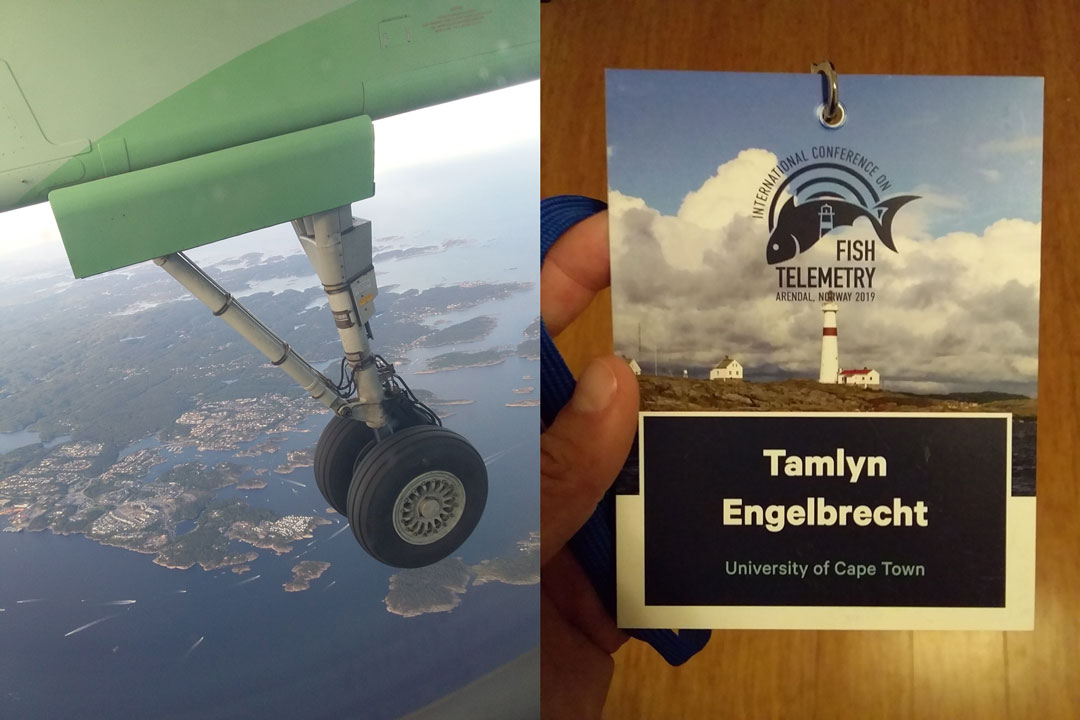 Flying in to Norway for the 5th ICFT 2019. Photo by Tamlyn Engelbrecht | © Shark Spotters

And so off I went to Norway. Not only was it an amazing experience to see a new part of the world, with such different scenery, culture, and of course, food, but the real treat was spending four days with like-minded scientists, talking all things telemetry. The slogan of the conference was “Devotion to Detection”, and I was blown away by the sheer extent and diversity of research that is being conducted in this field across the globe: from freshwater systems, to estuaries and coastal areas, right out to the open ocean, across a massive diversity of species, answering questions around behaviour, ecology, animal welfare, sustainable fisheries, conservation and many, many more. In addition to this, there was an exposé for the entire duration of the conference, showcasing the latest technology in marine biotelemetry, with devices that can tell you basically anything you need to know about an animal’s movement, behaviour, feeding patterns, metabolism, stress levels, social behaviour and much more – all in a package smaller than your palm.

But for me, one of the most resonating moments at the conference was the welcoming speech by the Director of the Institute for Marine Research (the host institute), Dr. Sissel Rogne. Now we are talking about a powerhouse in the world of research – she has served as the director of not one, but three scientific research institutes across the fields of biotechnology, conservation, and now, marine science. In her opening address, she smiled and declared “I am a nerd”, going on to say how proud she was to share that title with all of us, because after all, it is the passion and dedication of nerds across the world that allow science to progress in such impressive leaps and bounds. And at that, the scene was set for a great week sharing the excitement, the trials, the tribulations and the successes of working in the field of biotelemetry, whether over coffee and pastries at the conference venue, or ice-cold beers on the docks. 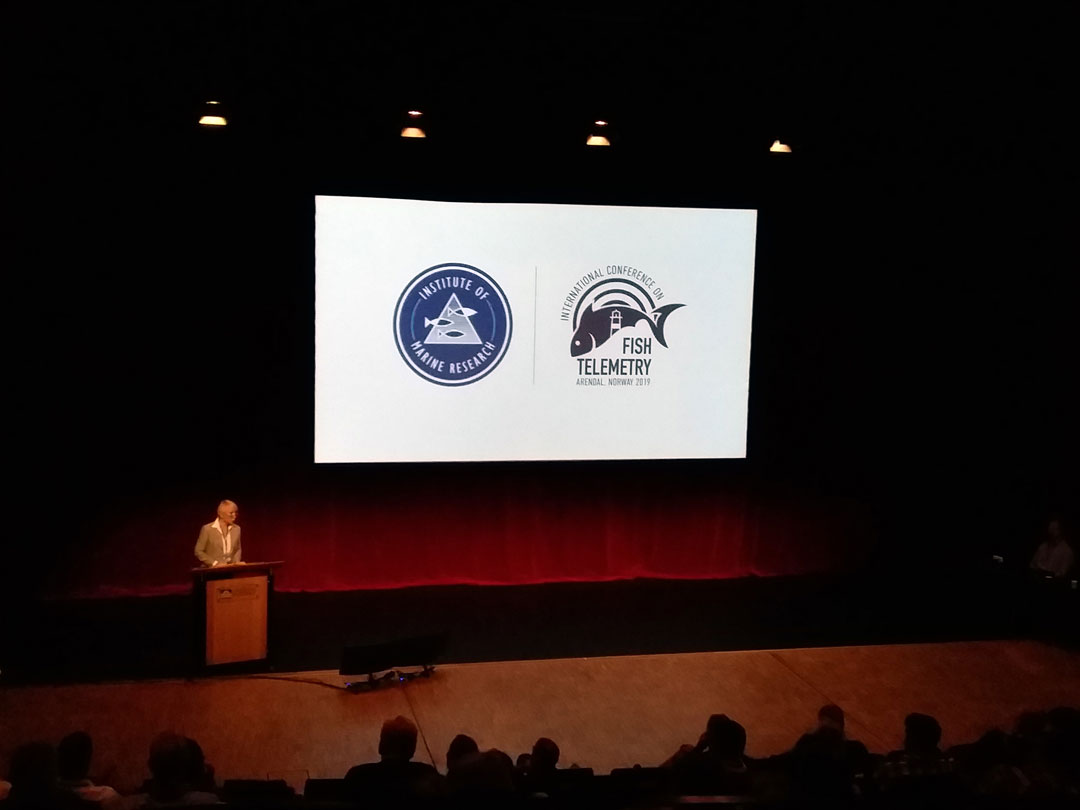 Unfortunately, the week was over all too quickly, and us telemetry nerds have now dispersed back into the real world, which so often involves glazed looks when we start getting hyped up about our research. But a valuable lesson that I have now learned is that, while it is amazing to share experiences and learn from other people that share your passion for a subject or field, each of us are just a small cog in the scientific machine. And it is the great diversity of interests and passions that keep this machine up and running, churning out solutions to the world’s most complex problems and challenges. So, don’t be deterred when eyes glaze over, don’t be put off by people that don’t share your enthusiasm for a topic, and don’t be too quick to judge someone else’s niche (even if it is botany). Just stay true to your inner nerd, fly your flag, and go and make a difference in the world.