Leatherback turtles need very different tank conditions to other sea turtle species Juvenile leatherbacks are kept on tethers because they do not recognise tank barriers. © Photo by Michael Scholl | Save Our Seas Foundation
By Jeanette Wyneken, 28th November 2014

Some animals live on land and others live fully in the water. That’s something that people know and understand. The idea that an animal born at sea spends its entire life at sea is easy to comprehend. These animals are pelagic. But when an animal hatches as a terrestrial creature, then lives its entire life at sea, shunning land – or anything like land – that lifestyle is much harder to grasp. These animals are pelagic too, or 99.9% pelagic. And it’s a description that pretty much defines the lives of leatherback turtles.

Leatherback turtle hatchlings incubate under the sand as ‘orphaned embryos’, hatch and make their way on their own to the sand surface. There they abruptly switch and become pelagic animals. For leatherbacks, sand is under flippers briefly as they move from the nest to the water. A decade later, land is recognised again by pregnant females when they come ashore to nest. For the rest of the time, leatherbacks are at sea in warm and cool waters, migrating. They live in a world with no walls and where the sea floor is so far away that it has no meaning.

In order to understand the pelagic existence of leatherback turtles we study their early lives both at sea and in the lab. To do the lab-based studies, we have to create a world that is pseudo-pelagic, so that the turtles behave as if they are in an infinite water world with a surface of air and no barriers ahead or below. While the turtles are in temporary residence they swim on tethers around the tanks, never hitting walls or the tank bottom – it’s as if those barriers don’t exist. 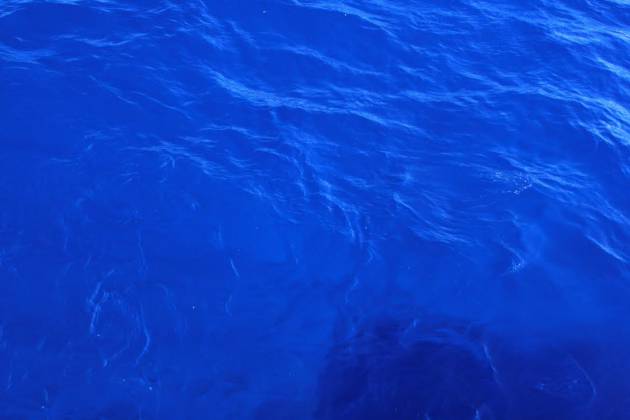 The blue water of the ocean seems limitless These pelagic waters are home to many organisms that live in the water column, a world without barriers. © Photo Jeanette Wyneken

People visiting our lab inevitably ask ‘Why is that turtle on a leash?’ We begin by explaining that they are pelagic turtles, but of course our terrestrial inquisitors need a bit more information than that. Few have been out of sight of land and fewer still have ever thought about a world without walls. The leatherbacks on leashes open people’s eyes to a fundamental feature of the ocean’s pelagic world. In addition, this technique is critical to enabling us to study the leatherback’s biology and to develop ways to study it at sea (in pelagic waters).

Defining ‘pelagic’ from the turtles’ perspective makes it an anchor term for discussing other imperilled species and what limits our understanding of their biology and constrains conservation action. The turtles’ barriers-are-meaningless behaviour is characteristic of a large number of pelagic animals, including many sharks, mantas, ocean sunfish, whales and billfish. By hiding barriers from leatherbacks we have been able to break down one more obstacle to the broad understanding of audiences and their appreciation of the ocean as home to pelagic animals. A neonate leatherback on a ‘leash’ in its pseudo-pelagic tank. © Photo Jeanette Wyneken

Project
Where do tiny turtles go?

Sea turtles need a safe place to live during each of their life stages. To protect them, we need to know where they go. Jeanette has spent years learning how to tag hatchlings of different turtle species to discover their early travel destinations.