‘Turtle Day’ – A visit from the FSU MTREC group

August 23rd, 2018 was the same as any morning at the Shark Lab, but for me, it will forever be referred to as ‘Turtle Day’. We had visiting research assistants at the lab, from the FSU Marine Turtle Research, Ecology and Conservation (MTREC) Group, who took volunteers with them each day to assist in the field. On this particular morning, a fellow volunteer and myself were selected. I was very excited because this was something new and I assumed that all the work I would be doing here was going to focus only on sharks.

After breakfast, we got ready for working out in the field and grabbed the equipment we needed. We packed up the skiff and took off for the day to Bonefish Hole, a new location that I had yet to work at.
The sun was out in full effect surrounded by a picture-perfect blue sky and minimal clouds. The water was so clear, and the turquoise and blue colour gradients starting from the mangrove edge was a perfect representation of the Bimini waters. I remember thinking to myself that the view was insane, and I couldn’t believe that I had the opportunity to live and work in such a beautiful place.

As we were entering Bonefish Hole we were told to scan the water for green sea turtles (Chelonia mydas). This is where polarized sunglasses are important, so when the Shark Lab advises you to bring them, do it. The combination of the sun glare and waves makes it hard to see if you don’t. If we saw a turtle, we were instructed to point it out and the chase would begin! The turtles would try a few different tactics to get away, weaving, changing direction quickly, and sometimes completely stopping, camouflaged in the seagrass. They were quick, and we were on a small skiff, so it felt like a high-speed chase in an action movie. Once the boat was close enough, someone would shallow water dive off the front-side onto the turtle. Us volunteers were given opportunities to dive and try to catch one; unfortunately, we were not as successful as the professionals! 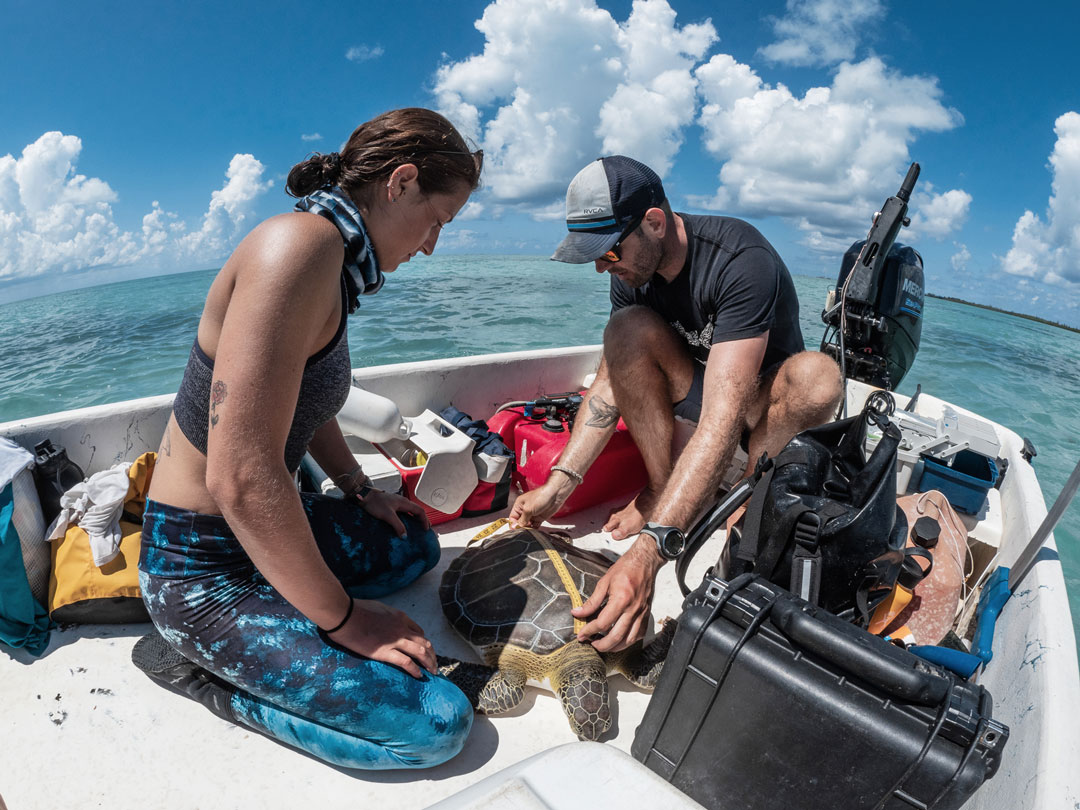 Once we had a few turtles in the boat, we then did work-ups on them. Measurements were taken along with small biological samples. While one turtle was getting worked-up the other turtles would make their way to the front of the boat, seeking refuge from the sun under my legs in the shade. It was truly a heart-warming moment to be near sea turtles. After the workup was done, we were able to get photos with the turtles before releasing them.

Turtle Day wasn’t an intense day. It wasn’t a day swimming with Bulls, Lemons, Reefs, or Tiger sharks. But, it was a day I will never forget.