The rise of shark nets?

The political fallout from a record number of fatal shark attacks in 2011 continues to emerge across the globe. There were five shark hunts in 2011, a total of six in the past two years and at least 11 shark hunts since 1993. The politics behind these responses are generally clear, with the blame being put on sharks and attention placed on relieving public anxiety. The problem is that shark hunts perpetuate stereotypes about “rogue” sharks and turn shark attacks into crimes and sharks into criminals, while leaving the beaches no safer for the public. However, 2012 has added to this political narrative with pressure to consider beach nets as a solution to human-shark conflicts.

To be clear, not all shark nets are intended to kill sharks. Netted beach enclosures were placed along 36 Hong Kong beaches following two clusters of shark bites and shark hunts in 1993 and 1995. Small rings that make up the nets limit deaths and by-catch. However, the maintenance of this program is estimated to be cost-prohibitive for most locations. In New South Wales and Queensland in Australia as well as KwaZulu Natal in South Africa the shark nets are gill nets designed to cull shark populations.

In February 2012, three beach locations in three different countries announced considerations to add some form of shark nets to their beaches following recent shark bites. First, Reunion Island has deliberated on it plans following three attacks and two fatalities in 2011. They have released a report for beach safety and shark management that includes consideration of some form of shark nets. Second, the community near Belmont Baths in New South Wales is pushing for the deployment of gill nets at the local beach following a serious shark bite on a surfer in January. Finally, Fish Hoek beach in Cape Town South Africa announced at the end of February that it would be “considering a proposal to begin a trail of shark exclusion nets” following serious injuries to a swimmer in 2011 and previous fatalities at the beach. 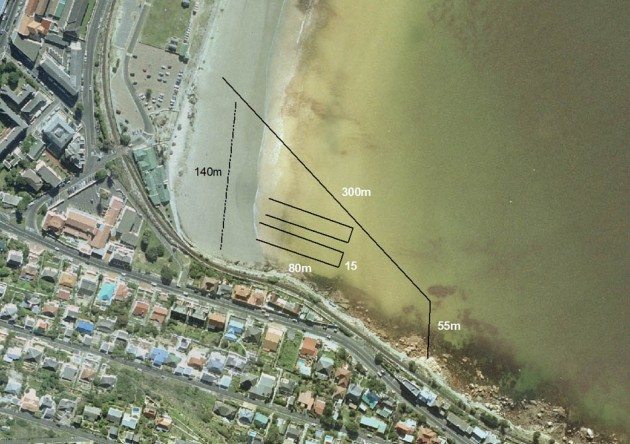 A proposal to take the first steps to begin a trial of shark exclusion nets in the southern section of Fish Hoek beach, South Africa

An important point to remember in reviewing these policy positions is that prevention is conservation. The more distance between sharks and people in shared recreational spaces the better for both. This trick is to balance the dynamics of public safety with the needs of an active ecosystem. While there are better shark nets than others, the decision to place anything the water is a significant change. Once nets of any kind are introduced into an area their impacts on marine life can be unknown, while the undoing these political decisions becomes nearly impossible. For example, Dunedin New Zealand experienced a tragic series of fatalities in 1964, 1967 and 1968 resulting in gill nets being placed in 1969 and expanded in 1976. The nets remained, even after 30 years went by without a fatal incident. During the debate in 2011 on removing the nets, the Otago Daily News interviewed Associate Professor Mike Barker who said that the nets “do nothing except provide swimmers with an illusion of safety”. The strength of this illusion; however, required 31 years to address.

This year may be a tipping point in the way humans manage sharks near beaches. Following a year of record shark hunts in 2011 with a record deployment of shark nets in 2012 should give us pause. The ocean cannot be off limits to us all the time, yet personal risk in the water should be based on the decisions that people make not governments. The question is how we can make ourselves safer while doing the least amount of damage. To date, not enough has been done to place shark bite prevention education on the agenda. As a result, old methods are tested anew. And while reserving any final judgements, history is a useful tool and teaches us that putting nets in the ocean should be a last resort. Respecting the ocean as “the wild” and behaving accordingly is the best way to limit risks and teach lessons about bather safety.

Christopher Neff is a PhD research at the University of Sydney in the Department of Government and International Relations. He is studying the “politics of shark attacks” in Australia, South African and the United States. His most recent academic journal article was released in January 2012 entitled “Australian Beach Safety and the Politics of Shark Attacks” by the Coastal Management Journal.