Once again the South African organised angling season has drawn to a close, so here is a little update about what the South African Shark Conservancy RecFishSA project has been up to in the past few months (and we have been busy busy busy so read on!)
The South African Shore Angling Association (SASAA) tournament season begins in September and ends in April. During these months competitive shore anglers target and release elasmobranchs to gain points for their club, province and personal score cards. The RecFishSA team attends the angling tournaments to tag and collect various angling specific data (See: Project blog for 13 December 2012 for details of data collected)

Since the onset of the 2013/14 angling season the RecFishSA team has attended various interclub and national tournaments in the False Bay and Struisbaai area (Western Cape, South Africa). Although we have attended competitions in other areas of South Africa, the False Bay and Struisaai sites are where the majority of our tagged sharks, skates and rays have been caught and released. This season we tagged close to 200 elasmobranchs and with our tag database now at over 780 elasmobranchs from 21 species, we are beginning to see some nice recapture results from the species we have highest amounts of tags out on.
At two national competitions held in February 2014 in Struisbaai, nine recaptured Lesser sandsharks (Rhinobatus annulatus) and one recaptured Bronze whaler (Carcharhinus brachyurus) were reported. One of the sandsharks was recaptured twice, within two weeks of first release. The first questions we usually receive from the anglers who report the tagged and recaptured shark are: “How far has it moved and how much has it grown?” Although the tagging information does reveal growth, movement and time since release, the question the RecFishSA team want to know the answer to is: are the sharks, skates and rays surviving catch and release angling?
Lesser guitarfish are commonly caught and released by shore anglers as a target species or as bycatch while targeting edible fish. Of the 293 individuals tagged by the RecFishSA team in the Struisbaai area, 14 reported recaptures reflects a 4.77% recapture rate. In all the angling events pertaining to the recaptured sandsharks – none of which were throat or gut hooked – air exposure (or time out of water) was less than 2 minutes. In the inshore commercial trawl industry approximately 18 million tonnes per annum are discarded in the commercial inshore trawl industry (Attwood et al 2011). The survival of discarded commercial bycatch is thought to be extremely low.
Of the recreationally caught, tagged and released Bronze Whaler sharks, seven recaptures have been reported, three of which were caught and retained by inshore commercial fishermen. This equates to a 3.19% recapture rate. More investigation into the survivability of caught and released Bronze whalers is definitely in order!
The RecFishSA project has finally been granted a research permit from the Department of Agriculture Forestry and Fisheries for blood collection to determine blood lactate and glucose levels of sharks exposed to varying degrees angling stress (i.e. fight time and air exposure). The team has begun to collect samples during angling tournaments and has so far collected seven samples from five species.
As always, the outcomes of this research will be used to inform anglers (and fisheries managers) of the negative effects and possible measures they can take to lessen the impact their economically valuable sport has on the species they target.
As mentioned in previous project blogs, recreational shore anglers in South Africa share a resource with inshore commercial fishers who target a similar species complex. Is a caught and released shark (who lives to be caught and released another day) worth more to the South African economy than a shark who is removed by commercial fishers? The RecFishSA researchers have been waiting for the Department of Agriculture Forestry and Fisheries to deliver recreational angling permit sale information which was requested by RecFishSA in early 2013. The permit sale information will be used to deliver a socio-economic survey designed to quantify the value of recreational shark angling in South Africa. We finally got the call we have been waiting for! The information is finally ready for collection. The survey design is complete, the information is ready and waiting for collection and the survey can now be delivered by telephone and internet to anglers around the country. 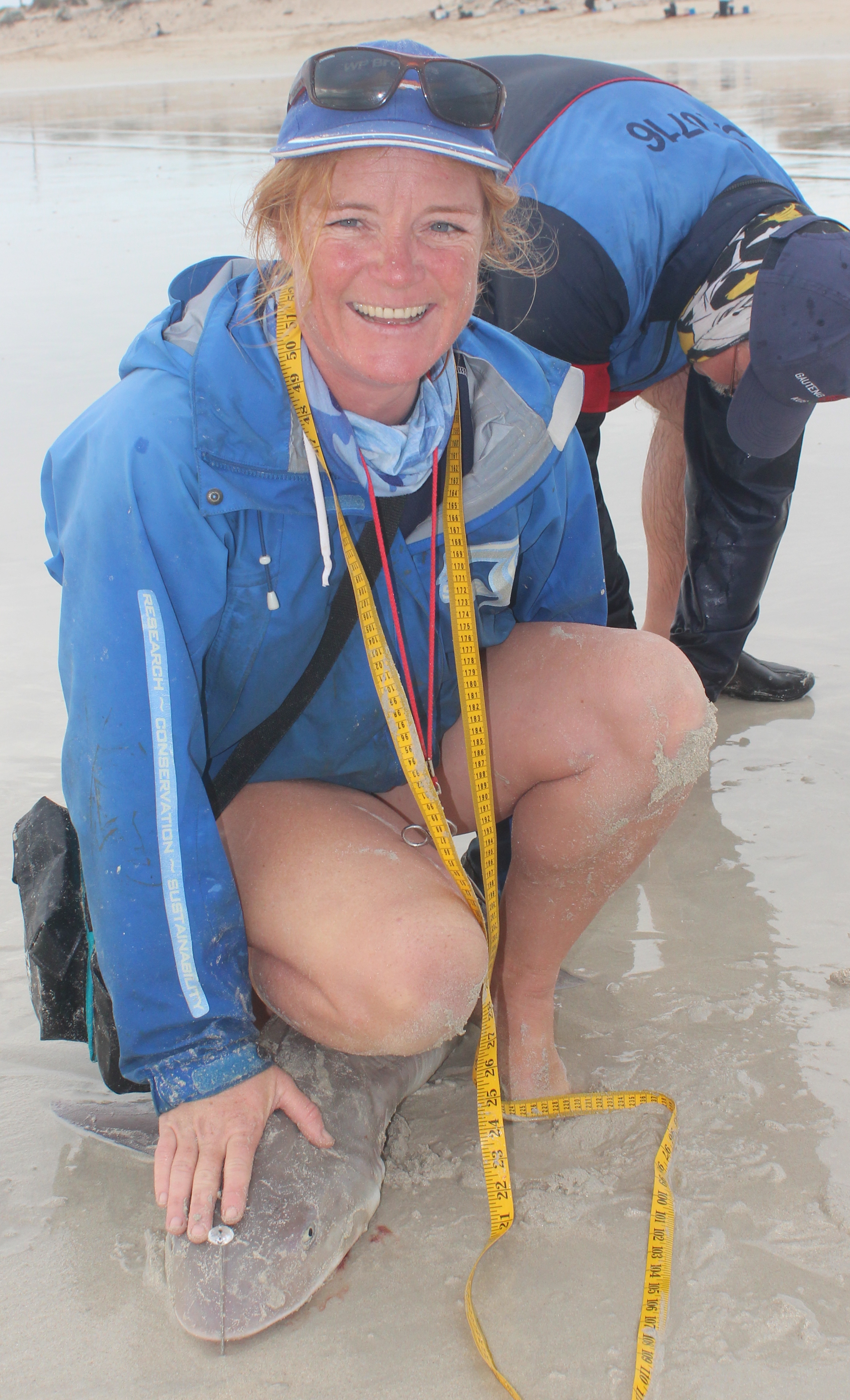 A Smooth houndshark (M. mustelus) is measured and tagged before release 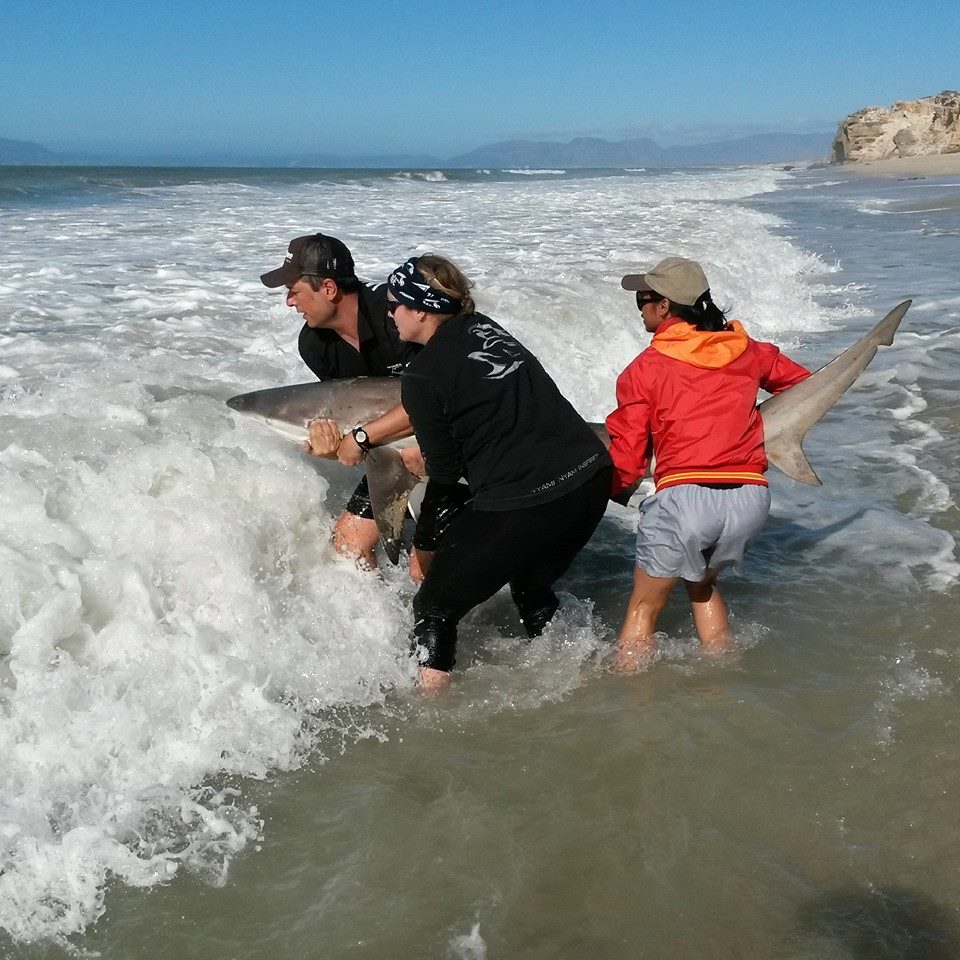