The noisy problem that is more than just plastic

In recent years, marine pollution has become an increasingly hot topic. We are more aware than ever about how human activity is affecting the ocean and what we can do to reduce our impact. If you think about the words “marine pollution” – what do they bring to mind? Typically, it is images of turtles wrapped in fishing gear, plastic bottles littering a coastline, stomachs of fish filled with small pieces of litter. Further, if I asked what you do to combat it, the norm is now to carry a reusable water bottle, refuse plastic straws, perhaps avoid eating fish altogether. 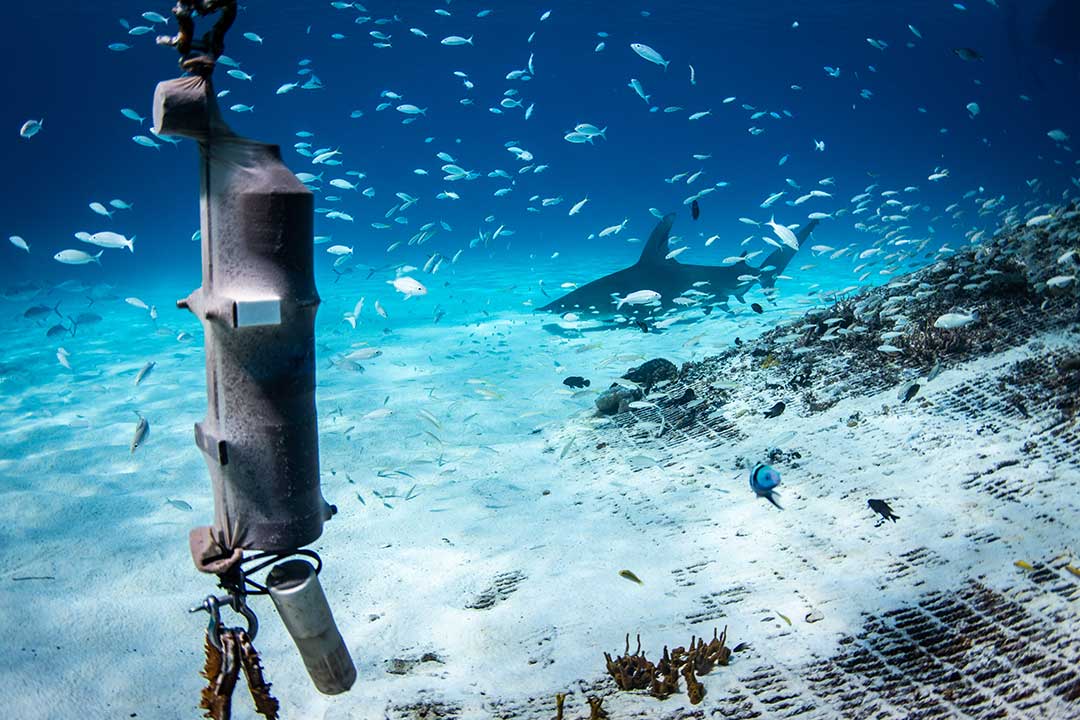 While these efforts are certainly not futile, marine pollution becoming synonymous with plastic pollution is to undersell a problem that is in fact much larger. Greater human interaction with the ocean has also introduced artificial light, invasive species, parasites and diseases, changed water chemistry and interrupted coastal processes. We can consider all of these as forms of marine pollution, with the type and severity of impacts variable among them.

One thing we unavoidably bring to the ocean and, unlike plastic, are unable to take back home with us, is noise. Both recreational and industrial endeavours are guilty; from small pleasure boats and jet skis all the way to large shipping vessels and seismic survey, we have undoubtedly rewritten the ocean’s natural chorus. Moreover, we have known this for a long time. The first publications to consider that marine organisms may be impacted by artificial noise date back to 1971, while the US Navy have been listening to artificial noise in the ocean for military purposes since 1949 through an extensive array of hydrophones that constantly listen and document the watery soundscape, and still do to this day.

Exactly how this artificial noise impacts ocean wildlife has shown to be broad and variable, covering many aspects of life histories. For example, in a 2016 study of damselfish by Professor Steve Simpson and colleagues at the University of Exeter, exposure to motorboat noise was discovered to reduce survival rates of post-settlement larvae, increase the metabolic rate of the fish and reduce the level and speed of their response to predators. In a second example, research from the Stellwagen Bank National Marine Sanctuary found that large shipping vessel noise caused a reduction in the amount of communication space available for North Atlantic right whales by 63-67%, as documented by Dr Leila Hatch and colleagues in 2012. 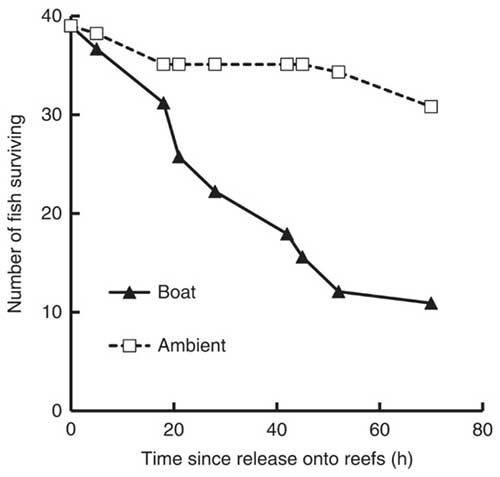 In addition to increasing mortality and masking communication, artificial noise has further been shown to impact parental care, habitat choice, space use, mating behaviours and physiological stress levels, among other things. As the field of marine bioacoustics grows, this current research and its worrying implications are now extensive enough to be considered as a firm basis for us to extend past sound-producing organisms and auditory specialists, such as coral reef fish and marine mammals, as the main focus of research into the effects of anthropogenic noise. 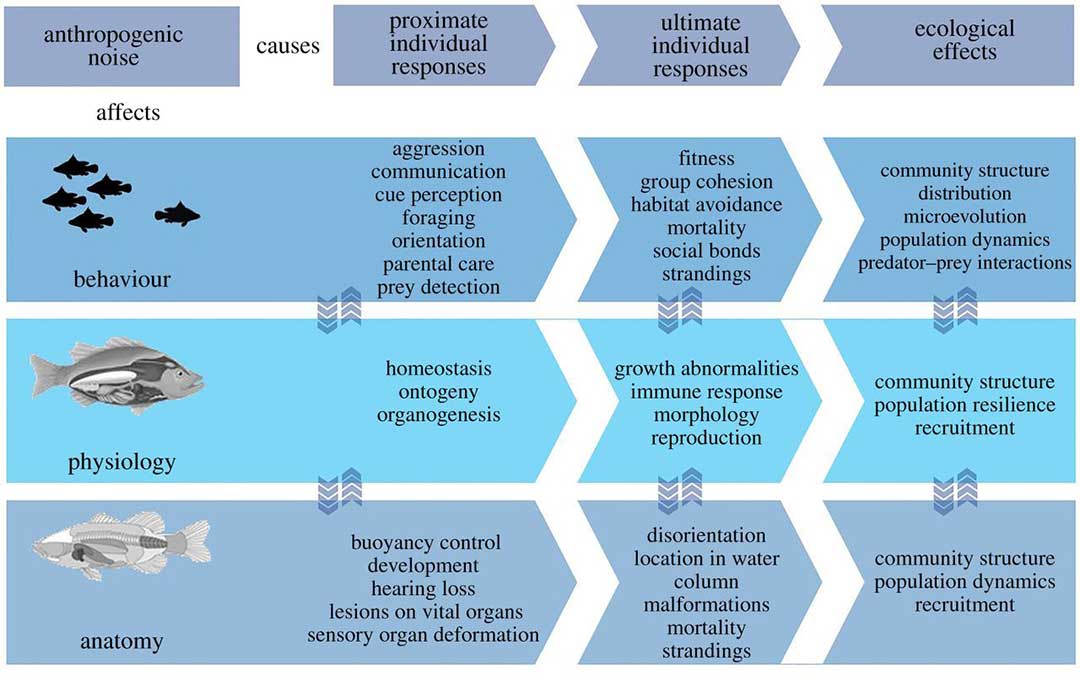 One group of organisms that have undergone relatively little research considering the long-term impacts of exposure to anthropogenic noise is sharks. As their physiology suggests, and some audiograms have determined, they are less sensitive to sound than many bony fish species. Yet they undoubtedly respond to auditory stimulus. In the 1970s, sharks were the focus of a handful of auditory studies, including some carried out by Bimini Sharklab founder Dr Samuel Gruber. Interestingly, noise can both deter and attract sharks depending on the sound frequency and pulsation. One central study found that low frequencies, similar to the range at which a struggling fish would be heard, are attractive, while loud and irregular noises elicit a withdrawal response. While this research only considered silky sharks, it provided a starting point for the study of shark sound perception. But is noise pollution changing shark behaviour and space use as we have seen in coral reef fish and marine mammals?

At the Bimini Sharklab, we are now making progress in answering this question and advancing our understanding of the relationship between elasmobranchs and anthropogenic noise. Bimini is a prime research location due to the combination of pristine habitat along the eastern edge with a heavily developed coastline on the western edge. This development facilitates high boat traffic and construction, and therefore the expansion of types, frequencies and intensities of noise that are present in many marine locations are represented here. 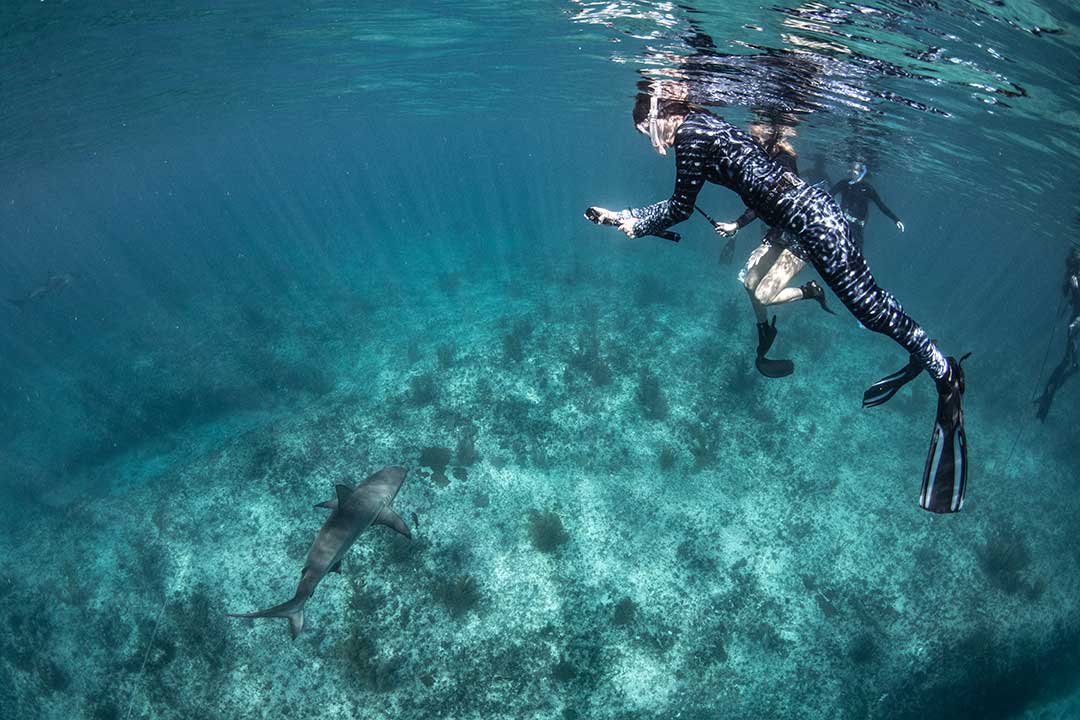 Using the robust model population of juvenile lemon sharks, which is comprised of up to 300 individuals, we are able to test the behavioural, physiological and spatial implications of anthropogenic noise. Importantly, we are also able to test the efficacy of potential mitigation strategies: for example, does introducing engine speed restrictions or construction-free zones decrease the impact we are having on the population? This project lends itself to governance and environmental management strategy, as well as providing a framework of study for use on other species of shark and ray that are likely to be variable in their response.

Having a detailed understanding of how we impact marine life with our actions is imperative to educating a generation of responsible water-users, recreational and industrial, as well as allowing us to make sound conservation decisions, such as ensuring the placement and restrictive measures of protected areas is effective and justified. Therefore, while we work towards producing meaningful science, we also work towards well-informed education. So next time you take a trip to the coast, try thinking about some of the other ways you can reduce your impact on the wildlife beyond the stainless-steel straw – the fish will thank you for it! 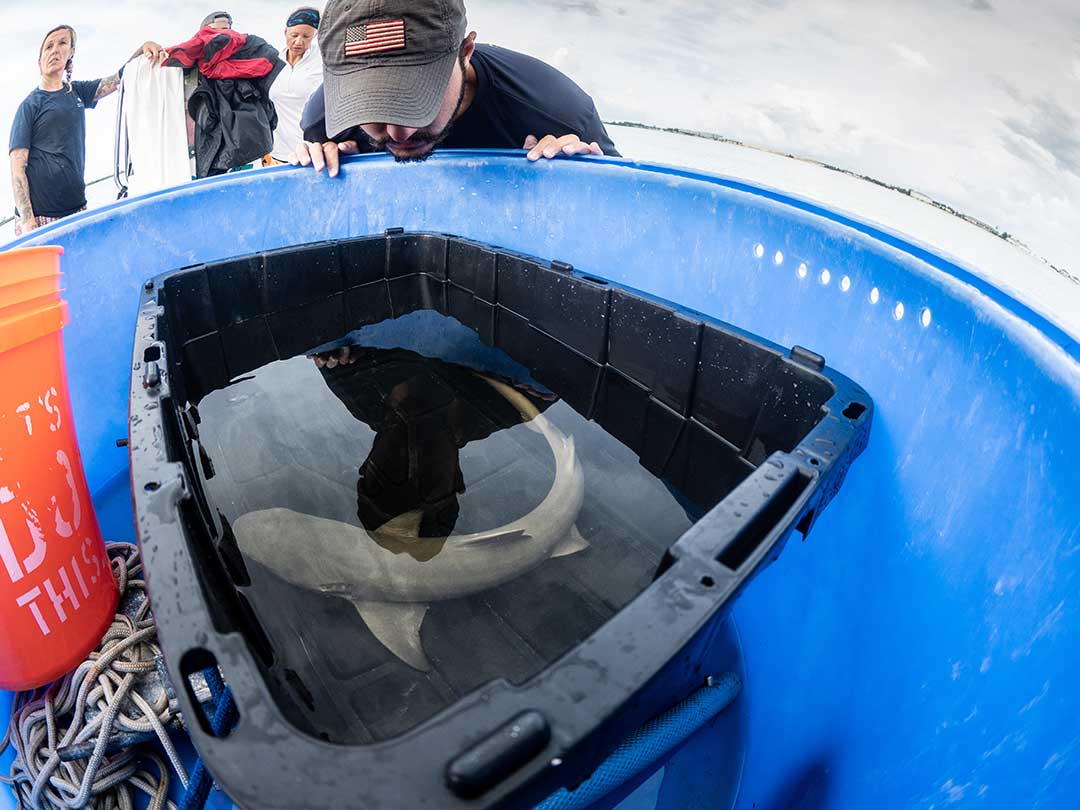 Further reading on this topic, and references for the studies mentioned: