Well the first of the Academy By The Sea Level 2 field camps has begun!

On Saturday 27th April, eight students from secondary schools across Mahé and Praslin were collected from various locations and taken to their departure point for an unknown destination!

The students’ parents and had succeeded in keeping the location of the Academy by the Sea Level 2 programme a secret and so it was with some surprise that the students found themselves deposited at the Domestic Airport terminal. At the airport the whole team assembled with Abi March the expedition leader and MCSS Educator in charge, ably assisted by local teacher Andy Alvis and Wise Oceans Educator Abbie Hine. A quick photo opportunity arrived when the local press turned up to see them on their way, so they guessed they were going somewhere exciting!

As the students checked in they were issued with gold rimmed blank boarding cards but still no inkling of a destination was given as they trouped through the security control to board their plane. 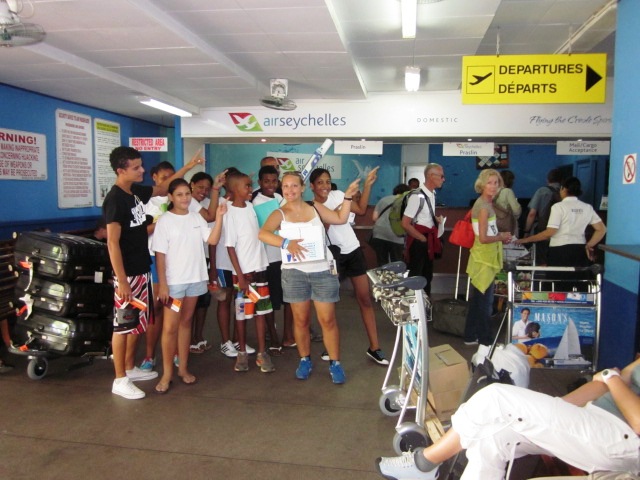 The team excitedly queuing to go through boarding control…

The excitement on the plane was fantastic, especially as the team neared their destination and through the windows several of Seychelles idyllic small islands could be seen surrounded by beautiful clear blue waters, but where were they?