Only when the plane had landed, the pilot revealed the secret… we had arrived on D’Arros!

D’Arros is a small island in the Amirantes, one of the coral island groups of the Seychelles outer islands. Last year the island and nearby St Joseph’s Atoll was purchased by the Founder of the Save Our Seas Foundation (SOSF). Now the SOSF together with the D’Arros Research Centre (DRC), which has now come under the SOSF banner, plan to turn this amazing and unique part of the Seychelles into a natural reserve. Over the next two weeks, SOSF will be hosting 16 Seychellois students on D’Arros Island. The stunning St. Joseph’s atoll with D’Aross island behind

As we stepped off the plane onto the grass runway we were met by staff from D’Arros Island and Michael Scholl, CEO of SOSF, and were then taken to our chalet accommodation right next to the sea. We then met scientists involved in SOSF and DRC work including scientific director of DRC Rainer von Brandis, lab manager Chris Boyes, SOSF Special Project Coordinator & Advisor for Mobulidae Guy Stevens and shark researcher James Lea. Over the next week these scientists will be telling us more about their research and conservation of animals in Seychelles.

The students involved in this fantastic adventure of a lifetime will be posting their experiences on the blog over the next two weeks. So check back soon to hear more about what we’ve been up to!

Abi will be sending post through as soon as she is able, in the meanwhile the second group has now departed for the atoll along with teacher Hugh Albert… This group did however know their destination as the Nation newspaper had leaked the story a few days before their departure.. 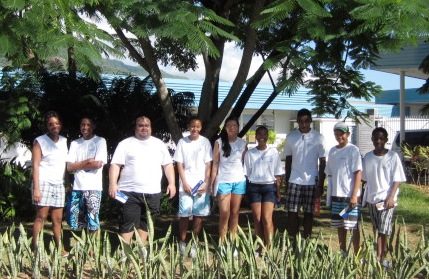 The second group ready for their flight to D’Aross