The most valuable marine resources in Madagascar

I have just visited NW Madagascar, speaking to shark fishers and community members to explore the potential for expanding our mobile phone data collection on shark fisheries to this region. Up to this point, Blue Ventures has only worked with shark fishers in the SW Madagascar, where shark fishing is normally done in local, wooden sailing pirogues on day-long trips.

Blue Ventures has a mangrove conservation project based in Ambanja, NW Madagascar, looking at ways for communities to develop new revenue streams based on mangrove conservation and benefit from the sustainable management of mangroves. The shark fishery in the NW has been previously documented, and Blue Ventures has gathered intimate stories of the way of life for shark fishers in this region. The shark fishery in the NW is characterised by larger fishing boats, often with motors, travelling and visiting fishing sites for 2-4 weeks at a time.

We had heard that the island of Nosy Faly, 50 km north of Ambanja, was home to several shark fishermen and I joined my colleagues there on a scoping mission to also look at examples of aquaculture activities in the region – in particular a community sea cucumber reserve.

Although the links between the sessile sea cucumber and predatory shark might not be obvious, here in Madagascar, and elsewhere in the region, they are highly sought after marine resources, with high demand from Asia causing them to fetch relatively high prices. Further south on the west coast in the Barren Isles where Blue Ventures also works, both act as powerful drivers of fisher migrations, and illegal bottle diving for sea cucumbers is rife. However, populations of both have suffered declines throughout Madagascar from overexploitation.

The community on Nosy Faly and nearby villages have protected one of their most valuable resources – sea cucumbers – through a temporary reserve that prohibits fishing for sea cucumbers for 9 months of the year. For 3 months of the year, the sea cucumber fishery opens but can still only be done by hand, helping to reduce overexploitation during the opening period. Additional temporary reserves governing other important fisheries, such as mahaloky (a species of mackerel) and sardinella (a herring/sardine type fish), and are timed to allow continuous fishing throughout the year to prevent declines in income. The sea cucumber reserve has been functioning for 2 years and reports from the CLB (the community management group) insist that the reserve has been a success with strong community buy-in. 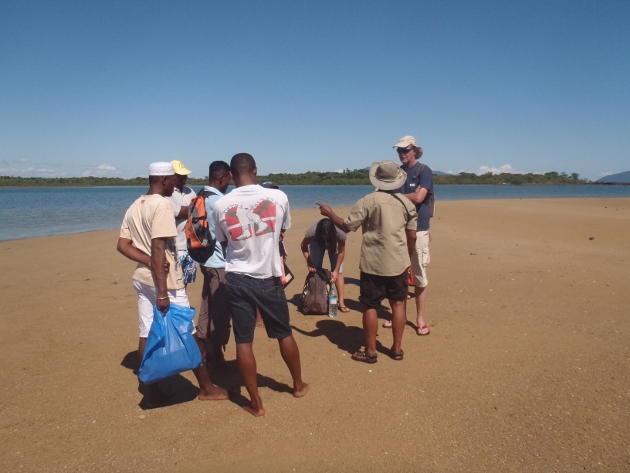 Meetings with shark fishers to discuss the potential project also revealed a desire to increase the management for shark fishing in the region, especially the intrusion of illegal vessels in their fishing grounds. Pertinent questions on how mobile phone data collection could help with management were discussed, including how it could help to stop or report illegal fishing. Blue Ventures are only just beginning to understand the possibilities of mobile phone use with their community conservation and research programmes – and the ability for fishers to record illegal fishing activities is another area we are eager to trial. 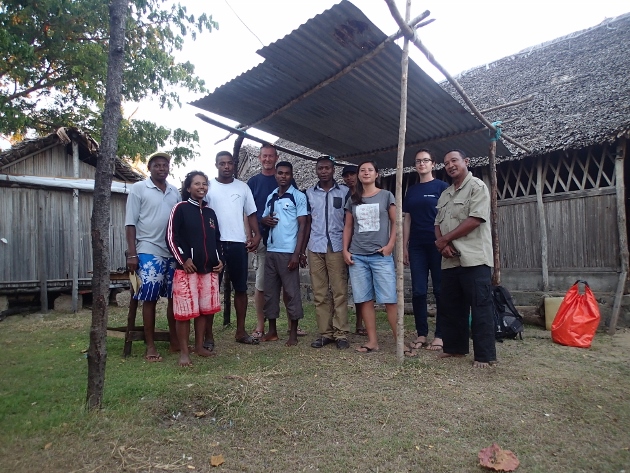 Members of the meeting on shark fishing included shark fishermen, the president of the village and CLB.

To witness a functioning and successful community-run sea cucumber reserve in Nosy Faly was an unexpected highlight of our scoping mission on shark fishing. We hope to return to Nosy Faly to support the community to assess the success of their sea cucumber reserve, and at the same time build capacity for monitoring and management of the shark fishery.