A previous post of mine introduced you all to SciFest Africa 2014 – and the 68 000 (or so) children who flooded Grahamstown during that period! A major component of our False Bay BRUVs work has been about using videos and novel ways to “bring the oceans ashore” to our South African public. It’s become a bit of a passion of mine to encourage future scientists too – given that I recall all too well how I’d search high and low for any opportunity to get into the field and discover what natural sciences were all about. 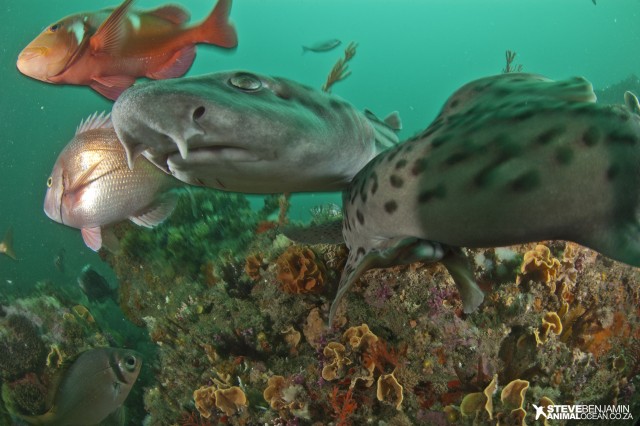 It’s another world down there: a leopard catshark noses into the camera with a roman, dageraad and fransmadam in view. Photo: Steve Benjamin.

In the midst of all our outreach work introducing learners to the ocean and (hopefully) giving them a first little nudge into the realm of marine science, I was asked to give a lecture as part of their annual lecture series. You can check it all out here: http://www.scifest.org.za/uploads/files/lectures_2014.pdf.

Choosing to read through the week’s lecture series programme proved to be a rather alarming decision: names like Captain Barrington Irving Jnr (the youngest and first black pilot to circumnavigate the earth solo), Jim Adams (NASA) and Professor Sir Peter Knight (how’s that for an intimidating title?!) loomed large and swam before my eyes. Realising that there’d been some sort of dreadful mistake, I quickly picked up the phone to ask the SciFest organising committee if …

Allowing myself a few moments to quell the sense of panic that was rising (rather rapidly) inside me, I realised that I had to approach this as a chance to introduce the audience to this other universe. Given that the SciFest theme for 2014 was space exploration, I had to use this as an opportunity to introduce the learners to this rather unexplored, and fragile, “space” that exists on our very own planet earth.

Introduced by SAIAB’s Angus Paterson, and with my stalwart colleagues from SAEON in attendance (aka The SA BRUVs Pioneers), I steadied myself and faced the sea of young faces staring expectantly back at me. I could recall the questions swirling in my own head at that age (Is a career in the natural sciences viable? What will I be doing? What about my maths? What subjects do I need to take?How do I get field experience?)

Philosophically-speaking, an invisible crutch was handed to me that day in the supportive forms of my fellow scientists from SAIAB and SAEON, all of whom are currently using BRUV technology as part of their monitoring arsenal. Their forms I could just make out, dotted at random in the midst of the unfamiliar faces. They are the heartening proof that a career in something that you love is indeed possible. That the decision to grapple with science and maths at school yields a greater reward in the form of a key that unlocks the opportunities that I myself am experiencing: research trips at sea, beach rambles that are actually to collect data (yes, they really are!) and a community that shares your insatiable curiosity and your determination to see that your work really means something.

The lecture was yet another reminder of the value of communicating science with a new, young audience. If we’re to change the tide for our oceans, we need more people in our team. Which means a growing generation of bright thinkers who can grapple with ecological thinking, and who take an active, vested interest in the state of our planet. And that, I believe, all starts with a bit of inspiration!

There is no live recording of the talk (I believe), but I have included here a link to another little podcast from some of our other work during the week, courtesy of SciBraai: http://scibraai.co.za/stories-from-scifest-africa-2014/.