It’s hard to believe that 14 months have passed since the start of the shark exclusion net trial in Fish Hoek. In 2012, the idea of installing an exclusion net at Fish Hoek beach (which had previously been considered and rejected) was reconsidered. A consultation process followed, in which the City of Cape Town Environmental Resource Management and Sports, Recreation and Amenities departments met with local councillors, representatives of the Fish Hoek Surf Lifesaving Club, representatives of the national Departments of Environmental Affairs and Agriculture, Forestry and Fisheries, and relevant local NGOs. Shark Spotters was tasked with testing the efficacy of the exclusion net and responsible for monitoring its impact on the local environment. The aim was to determine whether such an exclusion net, a non-lethal alternative to traditional shark nets, was a viable option for Fish Hoek.

The actual trial got started in March 2013 and ended last Saturday, 3 May 2014. In total we successfully deployed the exclusion net 130 times. During the first half of the trial (March – September 2013) the net was deployed on an ad hoc basis to test different configurations and practice the logistics of setting and retrieving the net. From October 2013 we started deploying it consistently on weekends, public holidays, school holidays and for the entire months of January and February (weather permitting). The time to deploy and retrieve the net has improved significantly since the beginning of the trial, and on average it now takes 38 min to deploy, and 54 min to retrieve the net, with the net remaining in the water for an average of 7.3 hours per deployment. Deployments and retrievals were only hampered by large swell (>2 m) and strong south easterly winds (±30 km/h).

White sharks entered the bay 18 times while the barrier was deployed, but remained >200 m from the barrier, except on one occasion where a medium sized white shark swam to within 1 meter, then abruptly changed direction and headed off in the other direction. Whether the sharks avoided the area or not, needs to be determined. Overall, we are extremely pleased that the shark barrier has had minimal impact on marine wildlife, with a single entanglement of a Cape cormorant, Phalacrocorax capensis. No cetaceans (whales or dolphins) have become entangled or interacted closely with the net, despite them being present in the bay on 42 occasions when the net was deployed. Southern right and humpback whales have been pro-actively herded away from the barrier on numerous occasions. Other animals were seen to be generally not impacted by the presence of the net, with seals regularly seen jumping over the net, small bait fish swimming through it and schools of large migratory fish swimming alongside the net.

Public support for the net has been phenomenal, both in terms of people swimming inside the net, as well as comments on the beach and campaigns on social media. Students from the University of Cape Town’s School of Economics, in association with the UCT Knowledge Co-op, conducted a public survey to gauge the level of support for continuation of the exclusion net. These results will be analysed and made available once the study has been completed.

The majority of people chose to swim inside the “exclusion zone”. (c) Shark Spotters

We are extremely pleased that our Shark Spotters team has risen to the challenge of implementing the trial. The project and concept was new to everyone, and no-one in the world had trialled a method such like this, which was deployed and retrieved each day. The project has resulted in job creation, empowerment and skills development. Three Shark Spotters have completed their 1nm certificate of competency (skippers ticket) and have been managing the practical deployment of the net on a daily basis. The crew of 9 previously unemployed individuals from Mountain View have perfected their deployment and retrieval techniques, learnt a lot of new skills, and have entertained the people of Fish Hoek with their acrobatic antiques over the summer season!

City of Cape Town and Shark Spotters are preparing a final report for the Department of Environmental Affairs and Department of Agriculture Fisheries and Forestry detailing the outcomes of the trial according to specific criteria given in the permit conditions. The City will also evaluate all aspects of the trial internally, and make recommendations regarding the possible installation of the net as a permanent safety feature in Fish Hoek over the summer season. However, we are very pleased to say that results to date indicate that the shark barrier is a cost effective, non-lethal shark safety measure with minimal impact on marine life and has strong public support. 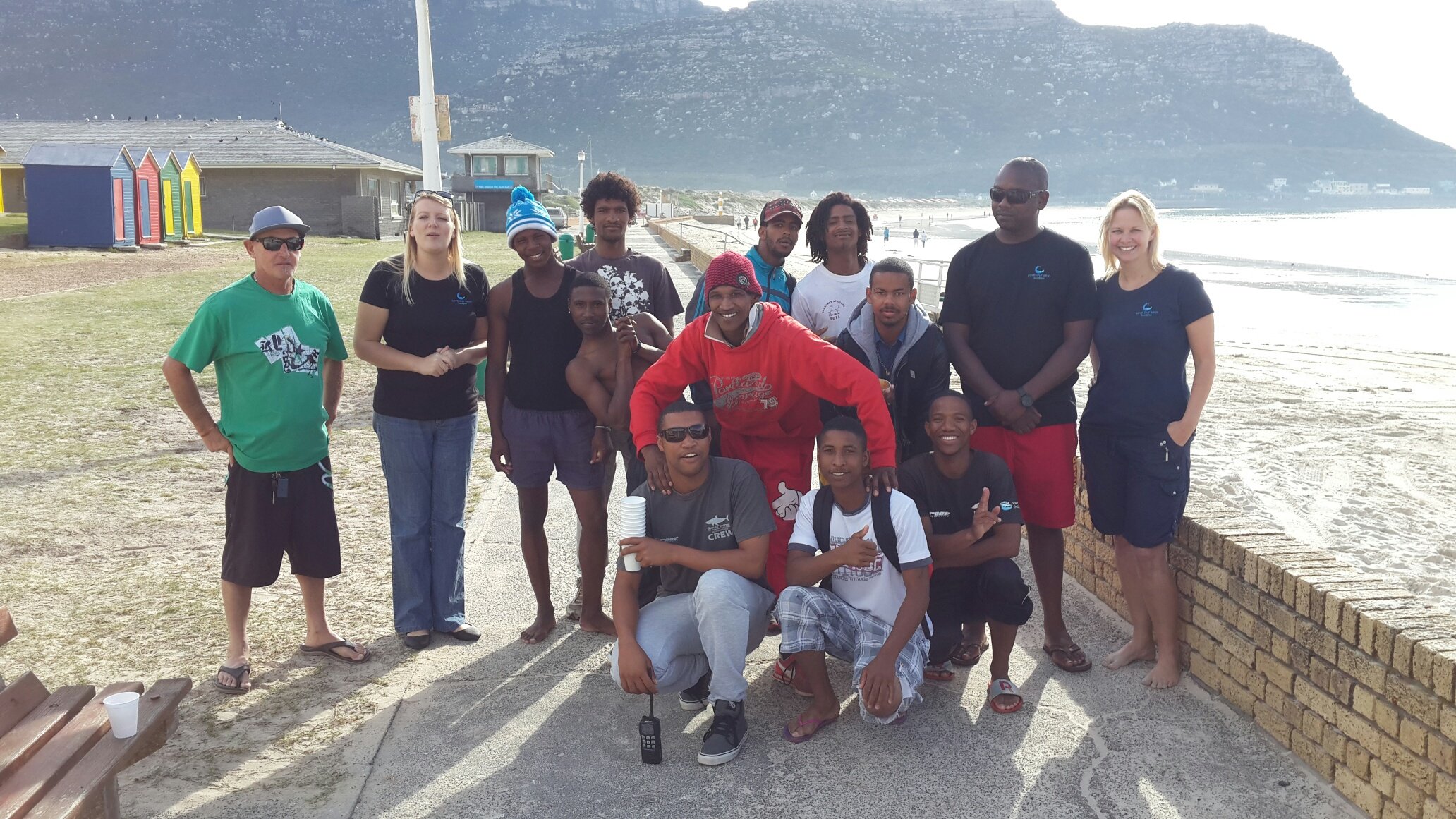 The Fish Hoek exclusion net team at their 130th successful deployment, marking the end of the trial. (c) Shark Spotters