The Devastation of Drifting Gillnets

I have just returned from a 2-day trip to Cilacap fishing port, in the southern coast of Central Java, in order to gather current information on manta and mobula ray landings at this site.

Cilacap is one of the largest fishing ports in Java where more than 160 drift gillnet fishing boats operate from. The drift gillnet fisheries are primarily targeting tuna species, however due to the destructive nature of the fishing techniques a large proportion of by-catch is caught.
Drifting gillnets are large-meshed nets that are designed to hang vertical in the water column not far from the surface. Once deployed the nets form an invisible, drifting wall that entangle anything that comes into contact with it, including marine mammals, sea birds, turtles, sharks and rays. Each piece of gillnet used by Cilacap fishers is approximately 40m wide and 20m high, and each fishing boat uses about 60 pieces of gillnet, forming a wall of net several kilometers long. It has been reported that approximately 35% of the total catch by Cilacap gillnet fishing boats is non-target “other” species. 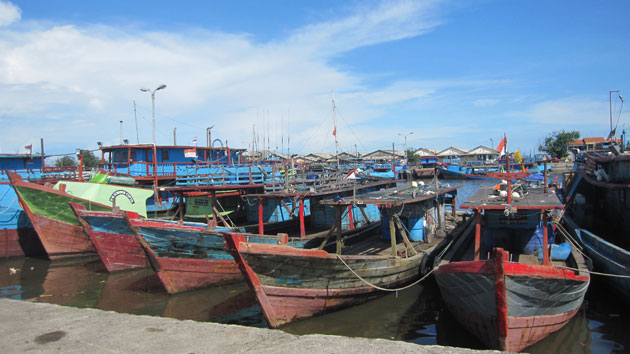 Day 1 at the fishing port was surprisingly quiet considering the number of boats operating from here. We arrived at 7am and the only action was one fishing boat unloading frozen tuna, we visited the port every hour until 5pm however no more landings came in.

Day 2 couldn’t have been more different from the previous day. When we arrived in the morning there were already a large quantity of fish laid out ready to be weighed and sorted, including a number of juvenile and mature sharks. Soon after we arrived a pile of 10 mobula rays (all Mobula japanica) were unloaded off a boat along with a number of sharks, stingrays, marlin and many other large pelagic fish species. 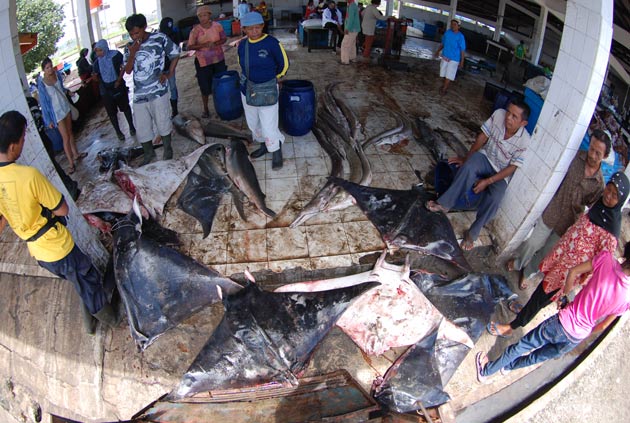 By interviewing fishermen and a local port operator it was determined that mobula and manta rays are caught most frequently between May and September, and approximately 1 ton of these rays are landed each day between these months. Although we did not see any manta, they are reportedly landed in Cilacap but not as regularly as mobula. The meat is sold locally as food and the gill rakers are removed and dried. One kilo of dried gill rakers reportedly sells for 500,000 IDR (US$ 50). 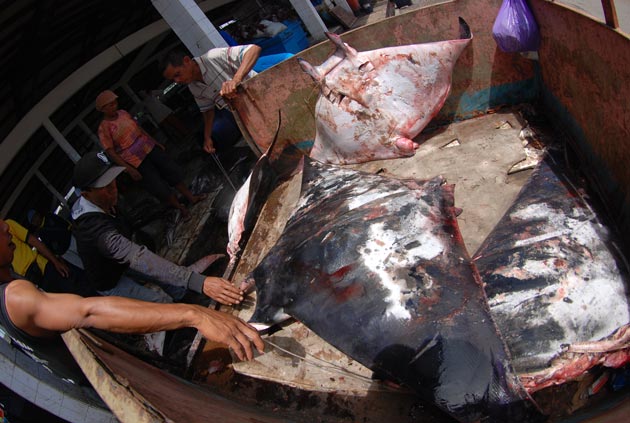 There is not a target fishery for manta and mobula rays in Cilacap, however, the relatively large amount taken as by-catch is extremely worrying. The slow growth and reproductive rates of these rays suggests that such high fishing pressure is not sustainable.
Manta and mobula rays are caught as by-catch throughout Indonesia and in order to prevent irreversible population declines these destructive fishing techniques need to be managed far more efficiently, and increased protected areas need to be created to provide protection for these graceful rays.

Despite being a top manta tourism destination, Indonesia was one of the largest manta fishing nations. Sarah has been there since 2010 learning about these vulnerable rays and raising awareness about their plight.