I should probably just get used to being wrong. Every time we pull up a shark species from the deep waters of Belize, I identify the individual to species in the field and mentally file it away. Upon returning from the field, photos are examined, measurements are taken, literature is consulted, samples are shipped off, and colleagues emailed to confirm the identification and share exciting news. 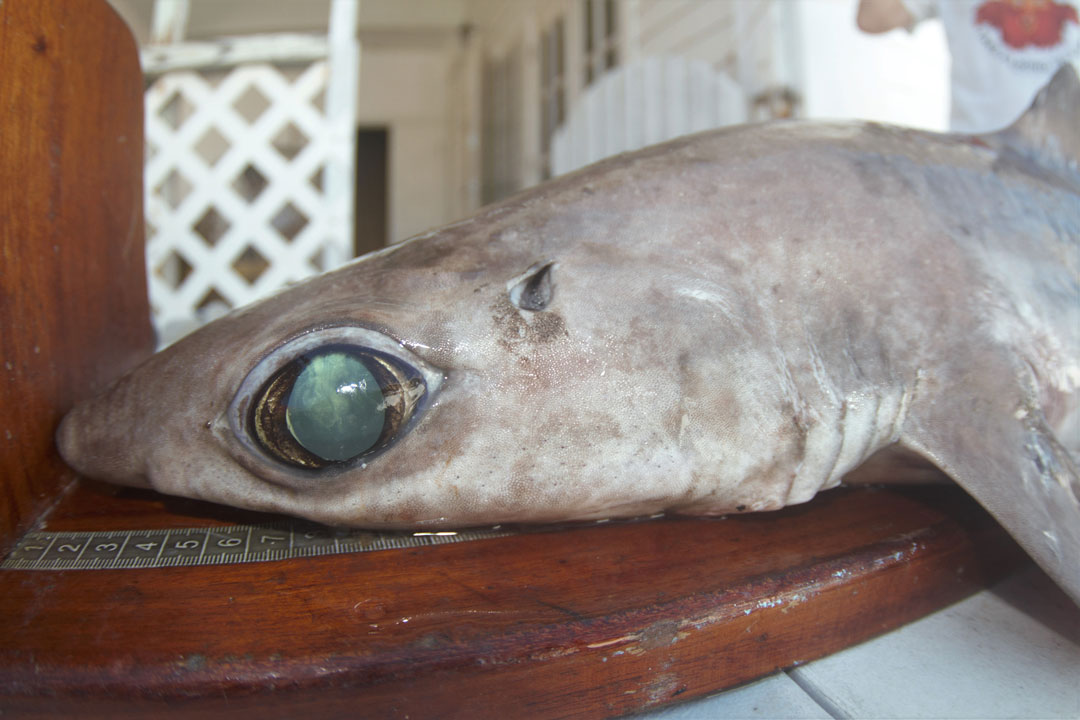 So far, having captured five different species of deep-sea sharks, I am 1 for 5 on my initial identification. This isn’t exactly my fault, as we are conducting some of the very first research on deep-sea sharks in the region, but I’m starting to worry about my average. 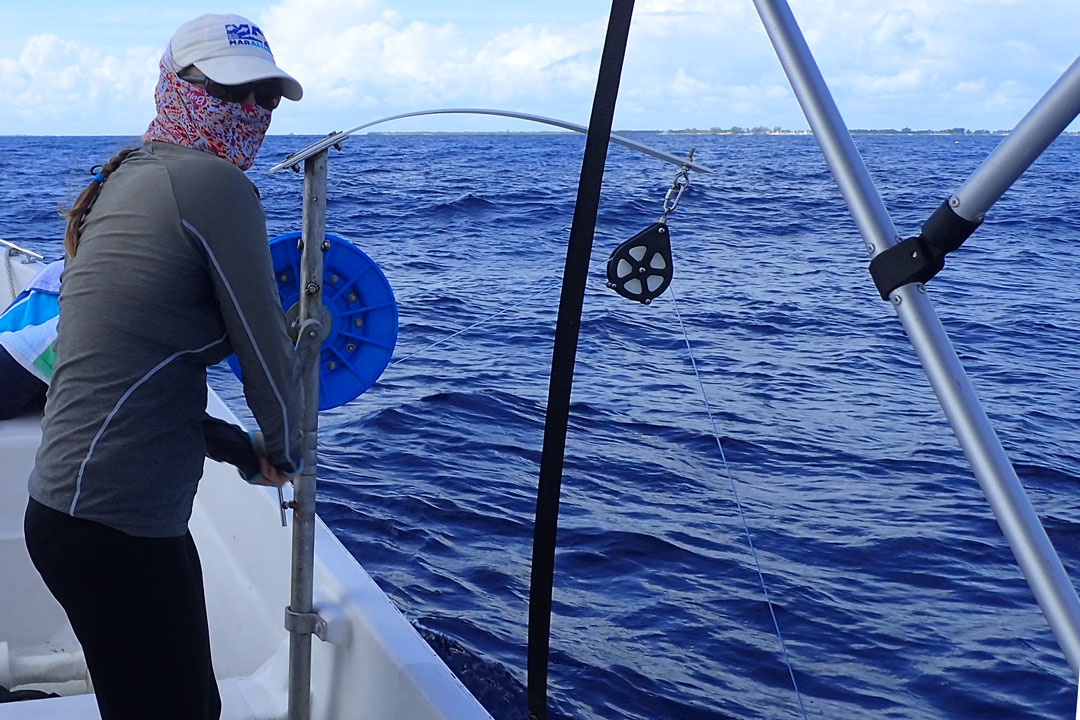 The author uses the bandit reel to haul up a shark from 280 m on one of the vertical longlines. Photo © Marcus Alamina

My first “mistake” was the unassuming smoothhound shark, which was identified as Mustelus canis, the dusky smoothhound. This widely-distributed species in the Atlantic Ocean is common in the region in shallow waters, and is known to inhabit waters up to 360 m. After studying the photos and consulting with other smoothhound researchers, that species has been downgraded to Mustelus sp. or “unidentified smoothhound.” Taxonomically conserved, the smoothhound sharks are notoriously difficult to identify in the field, and we are learning that in some cases, certain subspecies are extremely localized- some may even be limited to one island or atoll. We can now confidently say that we have absolutely no idea what species it is and are awaiting genetic confirmation. “I have no idea what that is.” -Dr. R. Dean Grubbs (pers com). 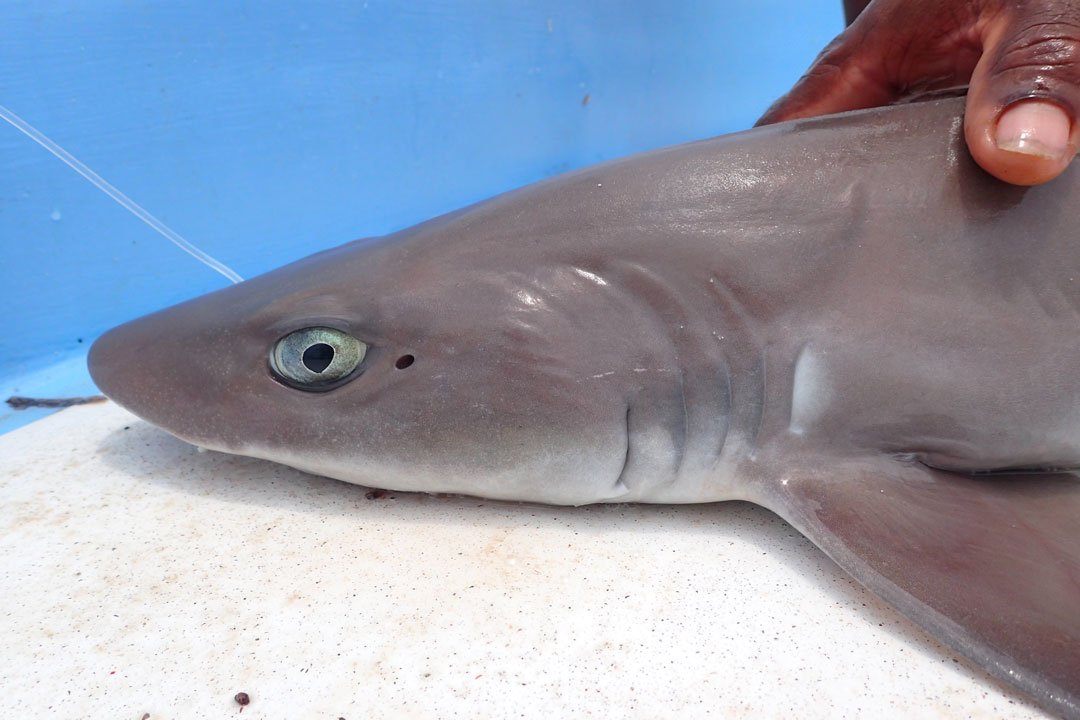 We were extremely excited when we captured our first bigeye sixgill shark, Hexanchus nakamurai, and have since gone on to capture, tag, and release eight more! We’ve documented this species from the very northern tip of the Belize Barrier Reef to Glover’s Atoll, the southern-most atoll of the Meso-American Barrier Reef. But hang on a second… the species name might actually be Hexanchus vitulus. Collaborating with Dr. Toby Daly-Engel at the University of West Florida on the genetics for these species, we have verified previous reports (Ebert et al. 2013a; Naylor et al. 2012) that the western Atlantic Ocean population is genetically distinct from the Indo-Pacific population of bigeye sixgill sharks. There’s still more taxonomic work to be done, so for now the species name is Hexanchus cf. nakamurai.* 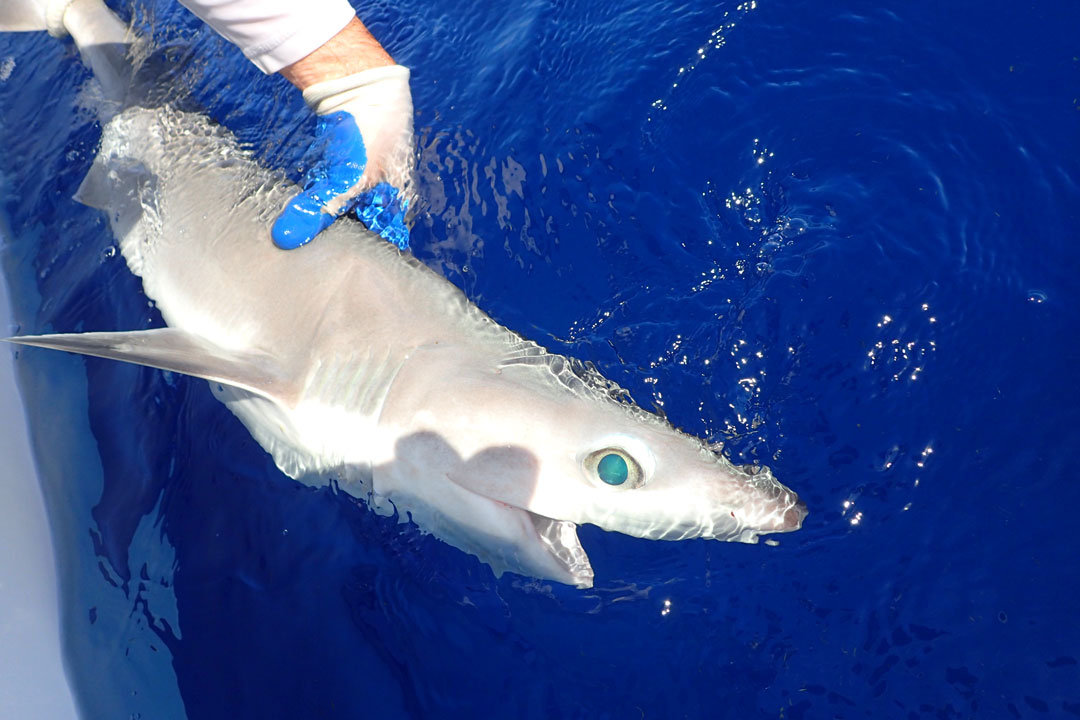 We recently implemented dusk/nighttime deep sets to determine if there are differences in the species assemblages by time of day, and immediately captured our first lanternshark! After collecting exhaustive taxonomic measurements and consulting with the literature and Sharks of the World (Ebert et al. 2013b), we had it narrowed down to the blurred smooth lanternshark, Etmopterus bigelowi. “Good guess,” said Dr. Dave Ebert, renowned shark and ray taxonomist and coauthor of the aforementioned Sharks of the World; however, this diminutive shark might actually be an undescribed species in a completely different clade. We are looking forward to collaborating with Dr. Ebert further on this, and other, poorly-known species to help expand knowledge of these glow-in-the-dark sharks. 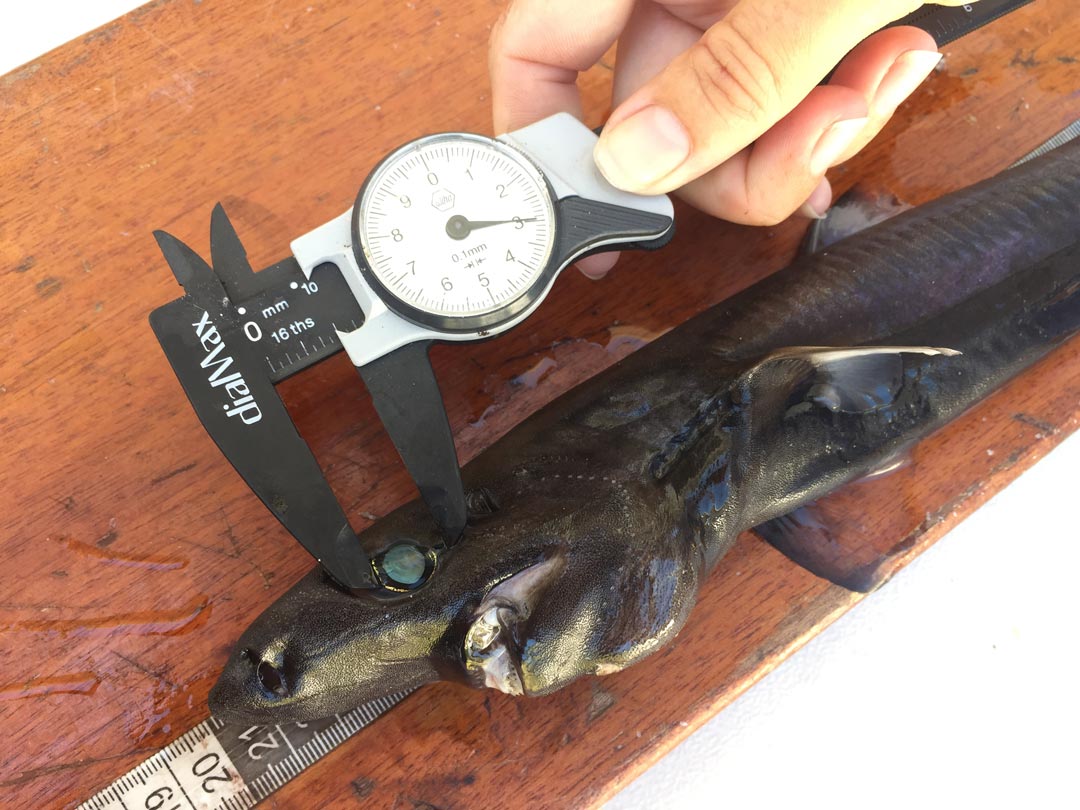 Gulper sharks are somewhat controversial taxonomically, and many researchers have noted the difficulties associated with identifying them to species. So it should come as no surprise that after measuring and dissecting a pregnant female “Centrophorus granulosus” I quickly realized that the shark was more than 40 cm smaller than the reported size at maturity for the species, and that this was something else completely. After consulting a dichotomous key, we conservatively believe that this species is “Clade B, Centrophorus Species 1,” which is an unconfirmed gulper shark species found in the Gulf of Mexico, Jamaica, and the Bahamas (Veríssimo et al. 2014). But don’t quote us on that just yet. 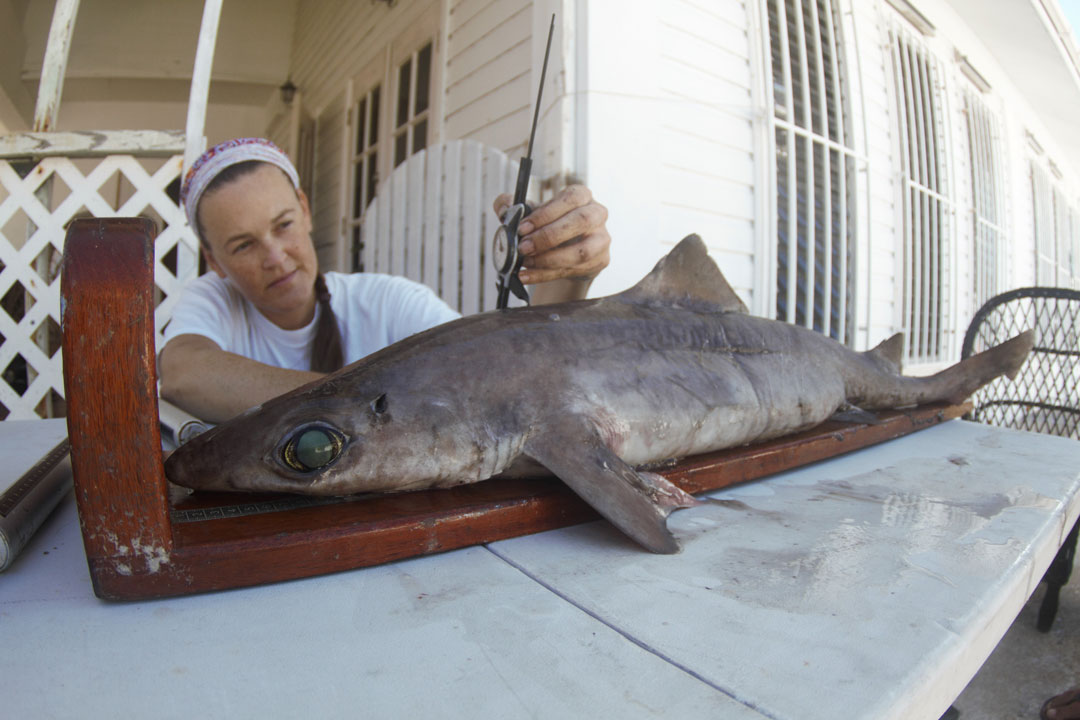 Night sharks, Carcharhinus signatus, I can positively, definitely, identify on sight. Having confirmed a seasonal aggregation of this rarely encountered species at the southern tip of Glover’s Reef Atoll, we are already planning a return trip to Glover’s in 2017 to learn more about the species in this region (previous blog post). So imagine our surprise when we captured a mature male night shark more than 120 km away in northern Belize the very next month! 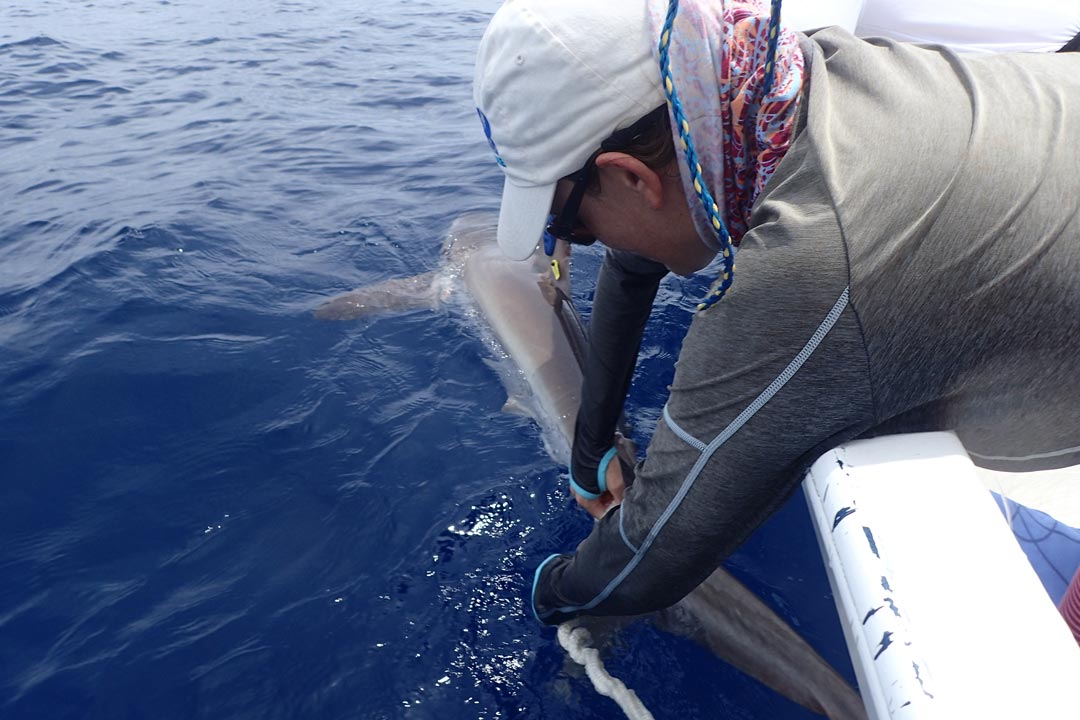 Needless to say, we are very enthusiastic about all of the mistaken identities we’ve come across. We are pleased to join a long line of “fish squeezers” whose sometimes tedious work leads to new findings and expands our knowledge of the natural world. To quote Isaac Isimov, “The most exciting phrase to hear in science, the one that heralds new discoveries, is not ‘Eureka!’ but ‘That’s funny…’”

*cf. in Latin means “confer”, and is used in taxonomic nomenclature to express that there is uncertainty in the species designation.