Taking the lab to the fish

Metabolism…usually the only time we are concerned with metabolism as humans is when thinking about how it affects our body weight as we get older. However, in the natural sciences metabolism is much, much more!

Metabolism refers to biochemical processes that occur in any living organism, including humans, to maintain life. These processes break down energy sources, like food,  for use towards growth, tissue repair, and activity. But of course, energy is not endless…animals must find food, which is limited and takes energy to find.  Therefore, animals face daily decisions in how to trade-off using and obtaining energy, and the rate at which an individual animal uses energy, aka ‘metabolic rate’, puts strong constraints on these decisions. As such, understanding the metabolism of wild animals gives scientists a powerful tool for understanding how animals behave in natural systems, as well as how environmental and climate change will impact these species.

How do we study metabolism?

Respirometry has been the gold standard method for studying metabolism in fishes. Essentially, respirometry involves sealing a fish in an airtight container and measuring the rate that the fish consumes oxygen, as a proxy for metabolic rate.

Respirometry studies started in the lab looking simply at defining metabolic variation amongst species. However, as our understanding of the metabolism of fishes advanced, naturally, the next step was to understand how metabolism functions in the natural world.

As scientists have become increasingly interested in understanding the wider ecological role of metabolism in the natural world, two main challenges have arisen. First, financial and logistical caveats have limited studies to small, easily kept species. Second, when trying to decipher the ecological importance of process, the bottom line is that we need to directly measure these processes in the wild to properly account for different environmental factors

While we are not the only ones pushing metabolism research into the field, these are some of the methods our lab has been working on to overcome these challenges.

Our paddling pool respirometer in action in the field. The photo on the left was the first version used in 2017, whereas the new and improved version from 2019 in Bimini, Bahamas is on the right. Photo © Evan Byrnes 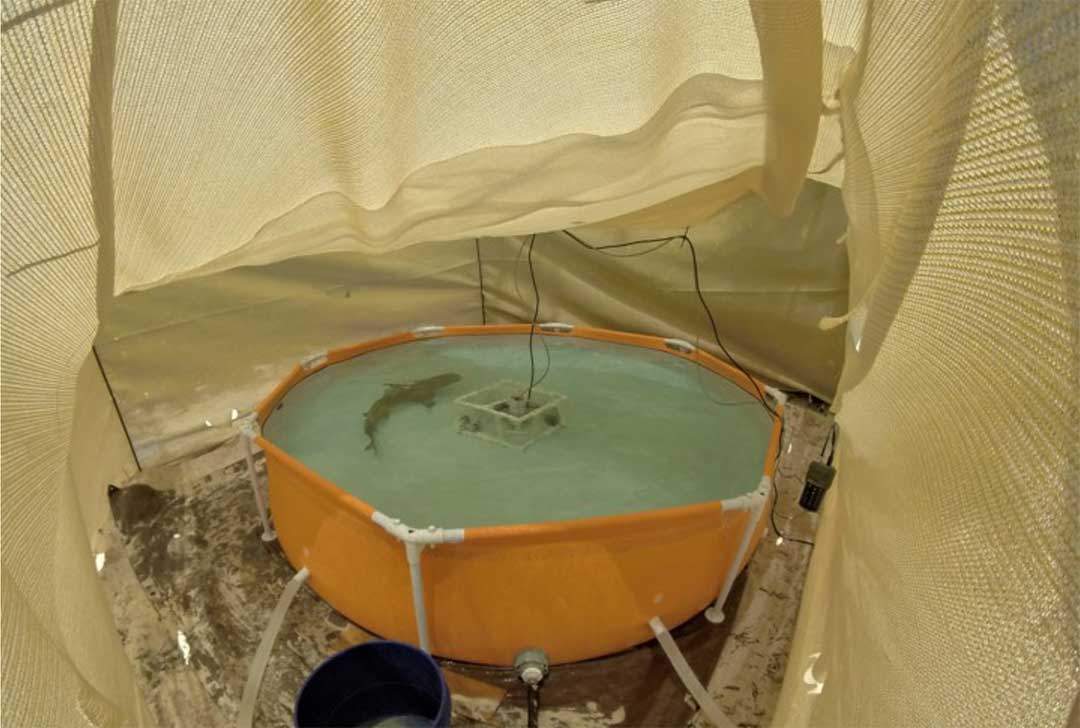 Challenge 1: Limitations of the lab

The challenges of keeping large species in the lab became even more apparent when we began working on the metabolic ecology freshwater sawfish Pristis pristis and bull sharks Carcharhinus leucas in the Fitzroy River. Not only were we faced with the difficulty of simply housing these large animals, but the remote location of the field site (>150km from the nearest city) made it difficult to even get them to captivity. Despite toying with ideas of how to get these fish to the lab, we quickly realized the most feasible option was to bring the respirometer to the fish.

In early 2017, we set out to develop a field-based respirometer that could accommodate species over one meter in length. With a limited budget and car space to transport the respirometer, this system had to be cheap and relatively lightweight and compact. Luckily, in today’s day and age, a number of cheap plastic products are available, with a children’s paddle pool presenting an ideal option. Cheap, collapsible, and made of durable vinyl…perfect! After a few modifications to add a circulation pump, an airtight lid, and a dissolved oxygen probe, and a few laboratory tests, we had a field respirometer!

During the 2017 field season, from July to November, we put our field respirometer to use. Through the season, respirometry trials were conducted on five juvenile sawfish and five bull sharks. Trials were conducted throughout the season to measure oxygen consumption rates of sharks over a range of temperatures. And after many sleepless (but star-filled and fireside) nights of respirometry, we had the first-ever oxygen consumption rates for sawfish and bull sharks! 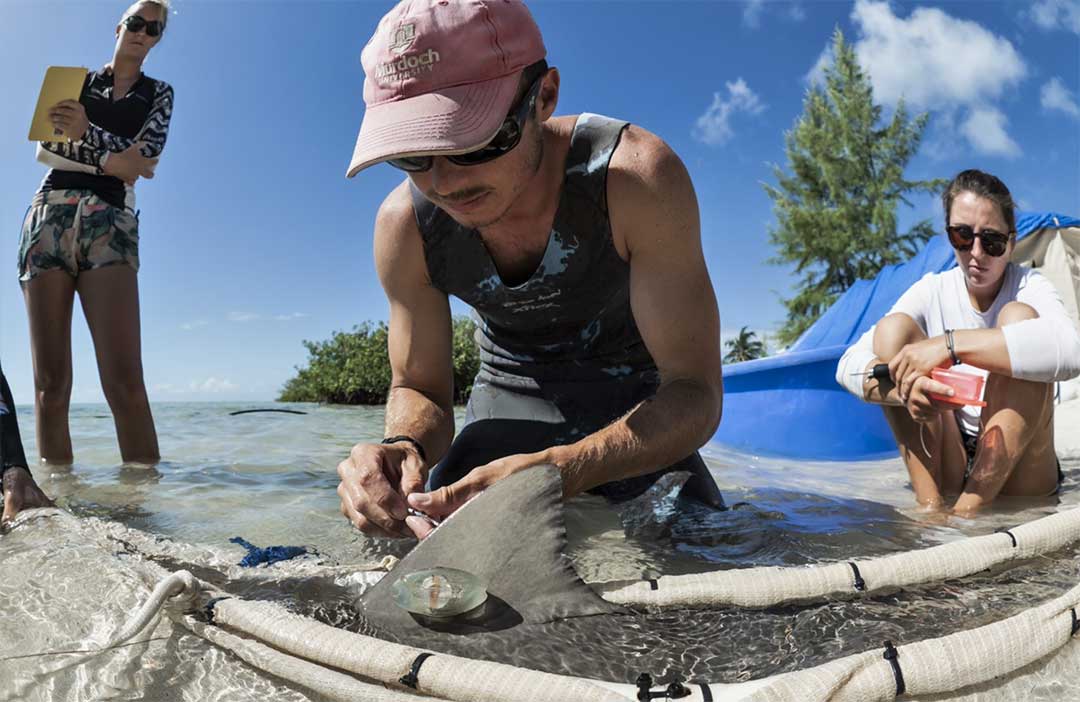 Attaching an acceleration data logger to the dorsal fin of a lemon shark prior to respirometry experiments. Photo © Sophie Hart

Telemetry and data logging tags are enhancing researchers’ ability to measure physiological data on elasmobranchs and teleost fishes and have been the main tool for attempting to estimate field metabolic rates. Previously, studies attempted to correlate heart rate, tailbeat frequency, swim speed, and muscle temperature with laboratory-measured metabolic rate. However, these techniques were either found to poorly correlate with the metabolic rate or were riddled with error due to the inability to account for external factors.

However, recent advances in acceleration data loggers presented a promising new tool for overcoming these errors. These tools are exactly the same technology in a FitBit, and as FitBits measure a person’s activity, we can attach them to fish to measure their activity and estimate energy expenditure (i.e. calories burned) throughout the day.

I’ll spare the juicy scientific details of exactly how this, but essentially activity takes energy, which is produced by metabolic processes that require oxygen. By attaching acceleration data loggers to fish throughout respirometry experiments, we can calibrate equations that describe this relationship between activity and oxygen requirements. And once armed with these equations, we can use acceleration data collected from free-swimming fishes to directly calculate their oxygen consumption in the wild! Ta-da…magic!!!

Recently we completed a series of these calibration experiments on lemon sharks (Negaprion brevirostris) out of Bimini, Bahamas and are currently collecting data from free-ranging lemon sharks with both short (3-7 days) and long term (12+ months) accelerometers. Many individuals are additionally tagged with various environmental sensors and acoustic tags to simultaneously provide data on ambient environmental conditions and to track individual movements. As this data will soon be retrieved and analysed, stay tuned to hear more! 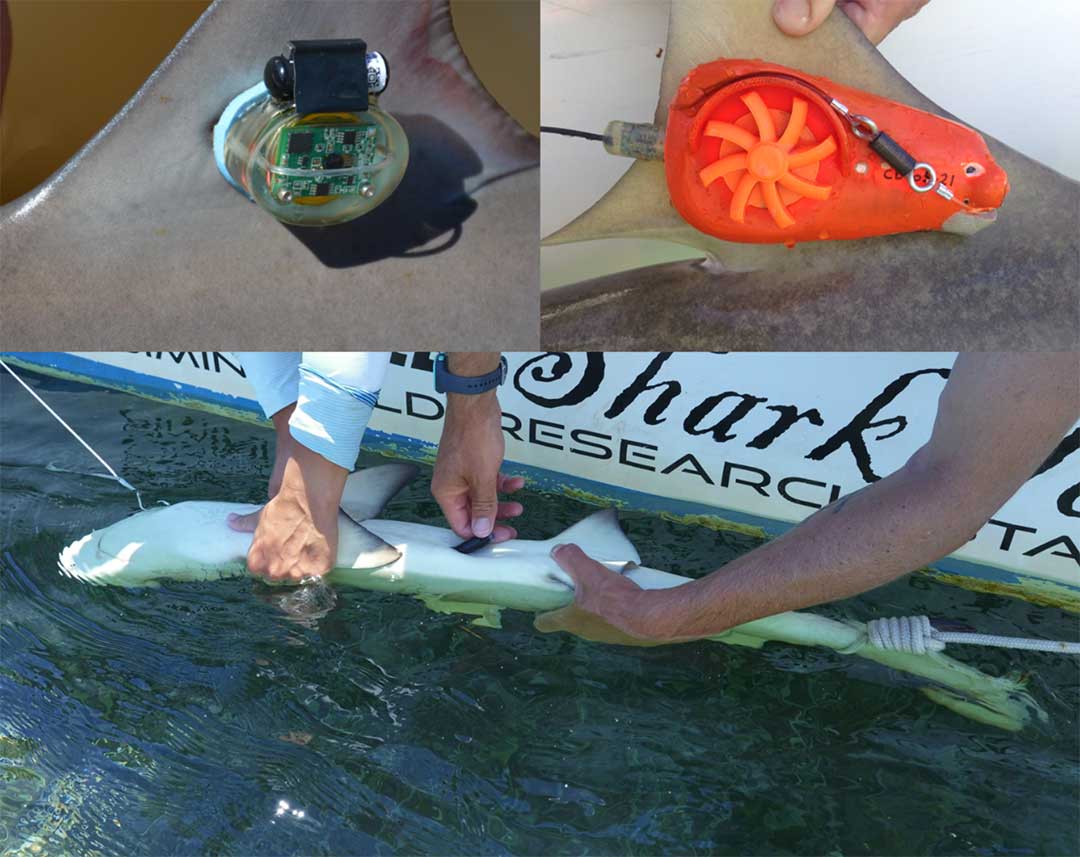