After 13 years of watching over Cape Town’s most popular beaches, Shark Spotters remains the primary shark safety strategy adopted by the City of Cape Town, promoting beach safety for countless locals and tourists alike. But is the programme keeping on top of its game and achieving its objectives of balancing the needs of people with the conservation of white sharks in Cape Town waters? 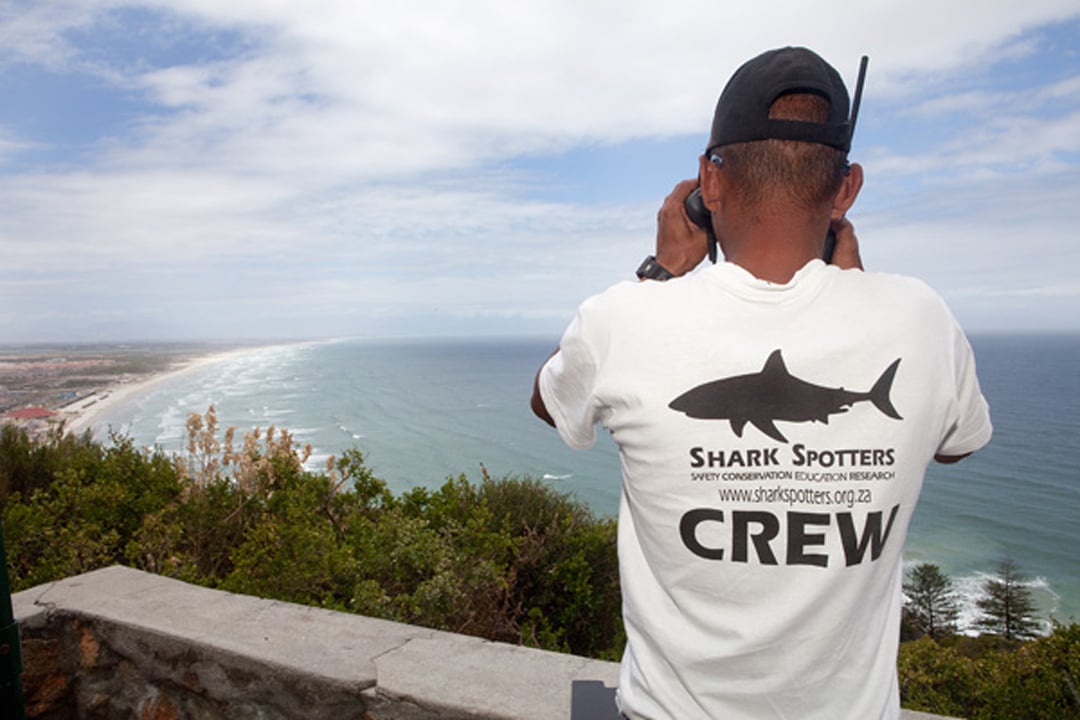 A shark spotter on watch from the mountainside above Muizenberg beach. Photo © Shark Spotters.

A recent study conducted through UCT’s Institute for Communities and Wildlife in Africa aimed to answer this question by looking at how sharks and people overlap in the inshore zone at popular beaches in False Bay, and how effective shark spotters are at getting people out of the water when a shark comes a little too close for comfort. To save you some time, we have summed up the key findings from the study. But if you are up for it, check out the full article here.

Sharing the inshore zone
The first key finding of the study was that sharks and people have similar patterns in their use of the inshore zone on a daily and seasonal basis, with the numbers of both peaking during the hours of midday to early afternoon in the spring and summer seasons. Although the reasons for white sharks utilizing these shallow beach habitats are unrelated to the presence of people in these areas, this overlap still needs to be managed, as it increases the potential for conflict between sharks and water users. 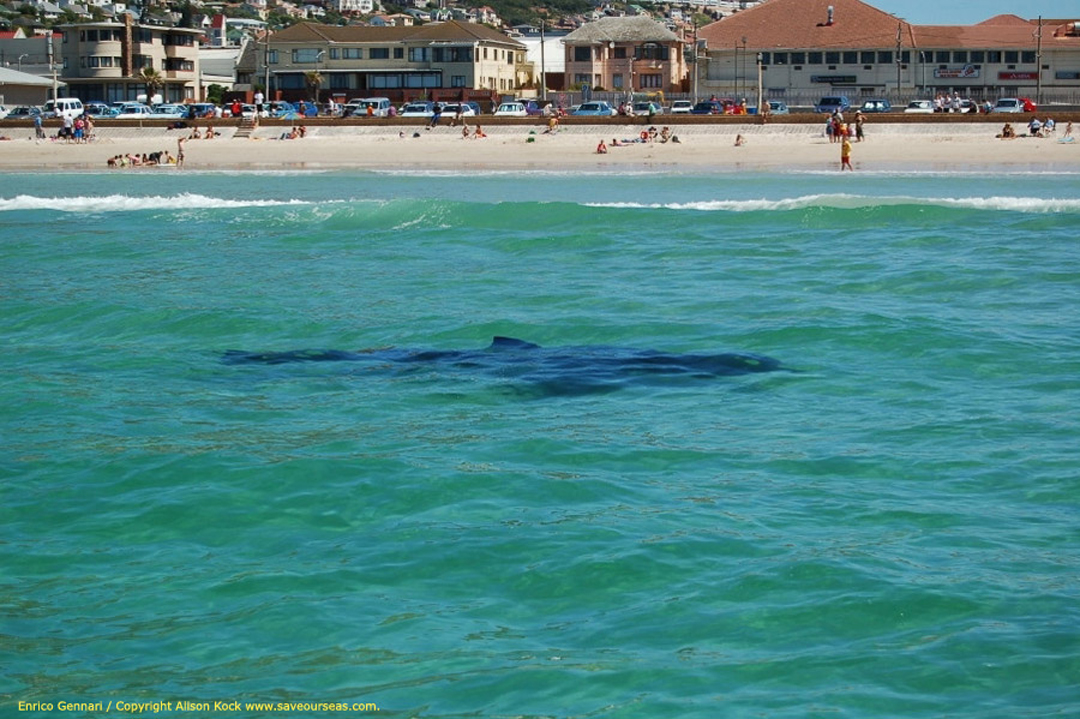 Managing risk
Enter Shark Spotters, the only programme of its kind in the world, with a unique system of visual (flags) and auditory (a siren) cues to warn people of shark presence and risk level when entering the water. The primary goal of this programme is to promote beach safety for people without harming sharks through the use of lethal mitigation methods such as shark nets. For a detailed explanation of the Shark Spotters warning system check out this page on the Shark Spotters website. Effectiveness of spotting
If you are a frequent visitor to Muizenberg beach you will know that nine times out of ten when you arrive you will be greeted with this sight: 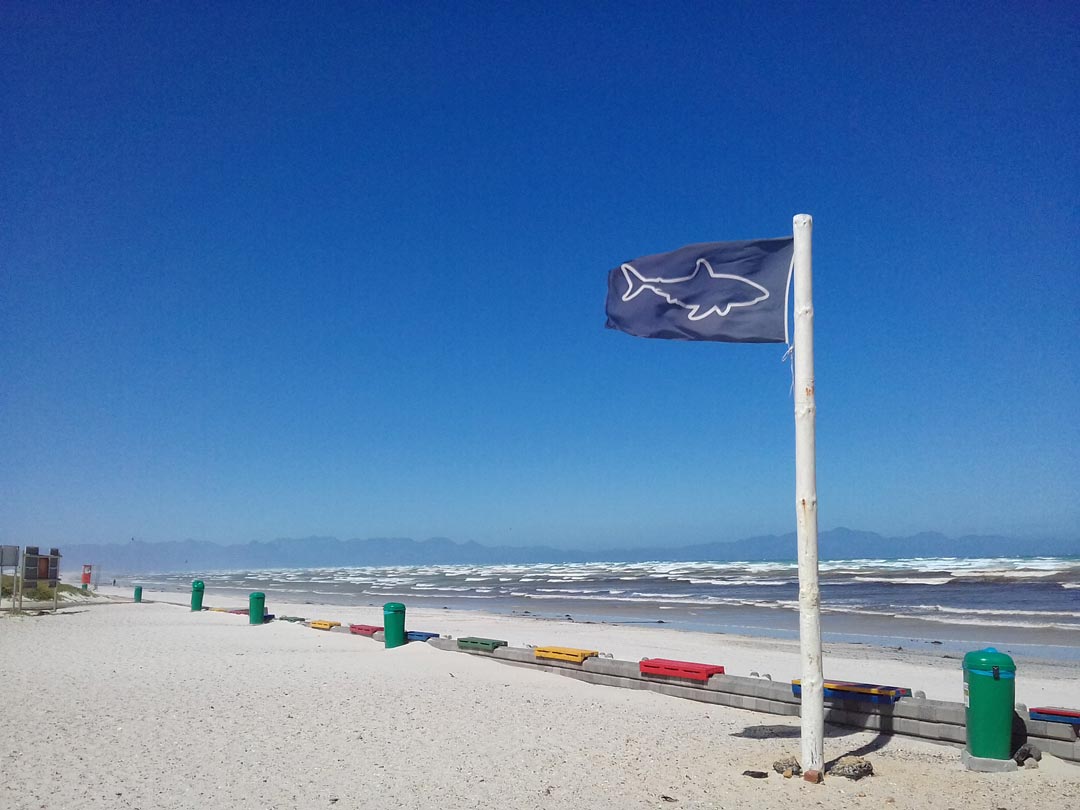 The infamous black flag, warning water users that spotting conditions are less than ideal. The good news arising from the study is that the frequent use of the black flag does not necessarily mean that spotters are blind to sharks cruising along the inshore zone. In fact, 85% of shark sightings recorded at Fish Hoek and Muizenberg beach over the last 10 years took place in sub-optimal spotting conditions under a black flag. However, it is important to remember that spotters can never guarantee that sharks will be sighted, and therefore use of the ocean will always be at your own risk.

Effectiveness of warning system
When a spotter detects a shark cruising along the inshore, they will follow one of two warning protocols, as illustrated below: 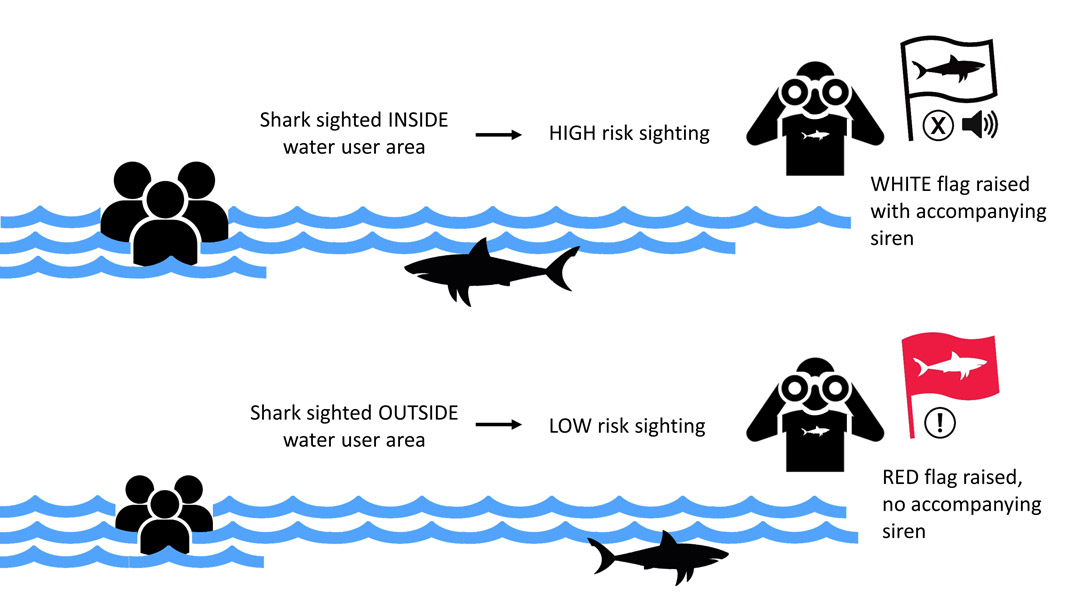 Different warning procedures used by Shark Spotters in the event of a shark sighting.

The good news is that the “high risk” warnings (the white flag and siren) are finding their mark, and successfully getting people out of the water when a shark enters the surf zone. This is not surprising, as if you’ve ever heard the shark siren ringing out across Muizenberg beach, you will know that it is enough to get most people walking on water towards shore. Fortunately however, the study also showed that this warning system doesn’t scare people off from getting back in the water for hours after a sighting. In fact, within an hour of the spotter giving the “All clear”, water user numbers are right back up to where they were before the sighting. 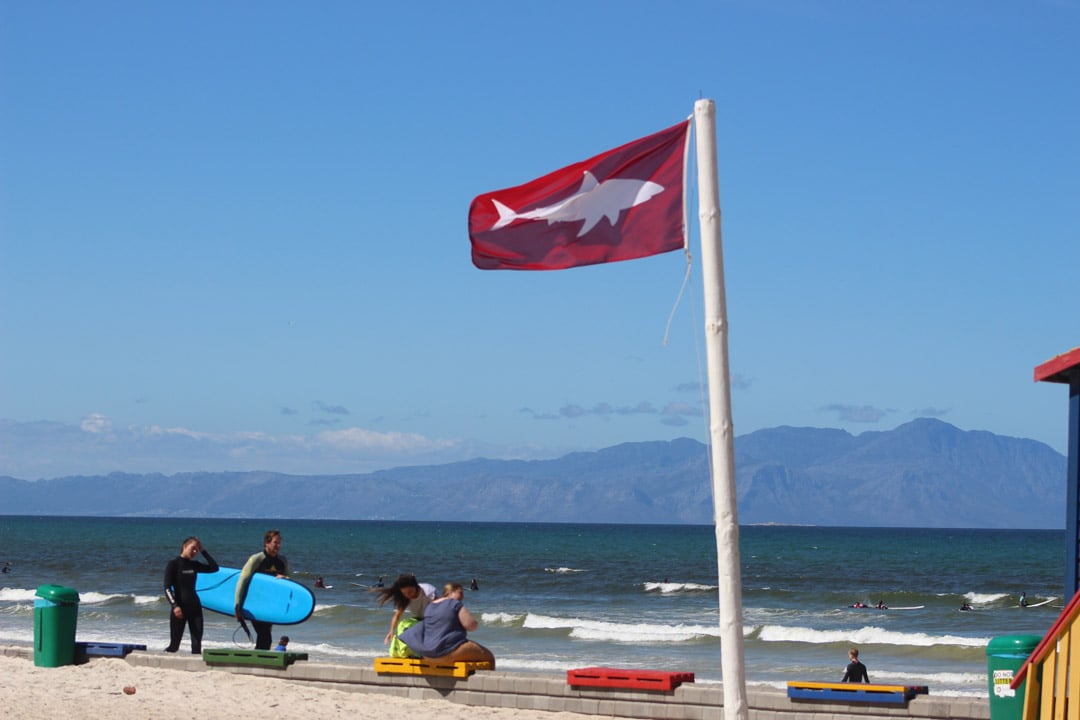 Unfortunately the second warning protocol, the red flag, which indicates “high shark alert” seems to have limited effectiveness. This flag is used for lower risk sightings, when a shark is not in close proximity to water users. It is also used when certain conditions make it more likely that a shark will enter the surf zone, such as when there are baitfish in the bay. This flag is raised without the startling auditory cue of a siren, and seems to have little to no effect on the number of water users present. Although the red flag signifies a lower risk category than the white flag and siren, it is still important for people to be aware of the increased danger of entering the water under a red flag, and adjust their behaviour accordingly. Ongoing education around the meaning of the red flag is therefore an imperative part of the programme, as well as feedback from the community about their perceptions of risk when the red flag is flown. A beach spotter at Fish Hoek beach explaining the programme to a member of the public. Photo © Shark Spotters

Maximising the effectiveness of Shark Spotters is crucial, as the study also showed that the occurrence of a fatal shark incident significantly reduced the number of water users present for at least three months following the incident. This confirms that shark bites have negative repercussions for communities and local businesses that rely on local water sports and tourism for income.

In conclusion…
All in all, Shark Spotters definitely fits the bill as a proactive, environmentally responsible and sustainable shark safety strategy. The programme successfully mitigates the risk of conflict between water users and white sharks during times of peak overlap between these groups, when the risk of a negative interaction is highest. By significantly reducing this risk, the programme is able to protect people, sharks and the local economy from the negative repercussions of shark bites.