Well into the third year of the deep water shark project, we have learned quite a lot about what I like to call the ‘Weird Sharks of Belize’. We’re now up to nine species, and we’re sending cameras (BRUVs) down to habitats that have never been seen by human eyes. Our catch rates are pretty high for the deep sea, and we’ve got a great cohort of fishers trained in research methodology and sampling. But one thing has eluded us on this project, and it had been driving me crazy. We had not caught a single dogfish. 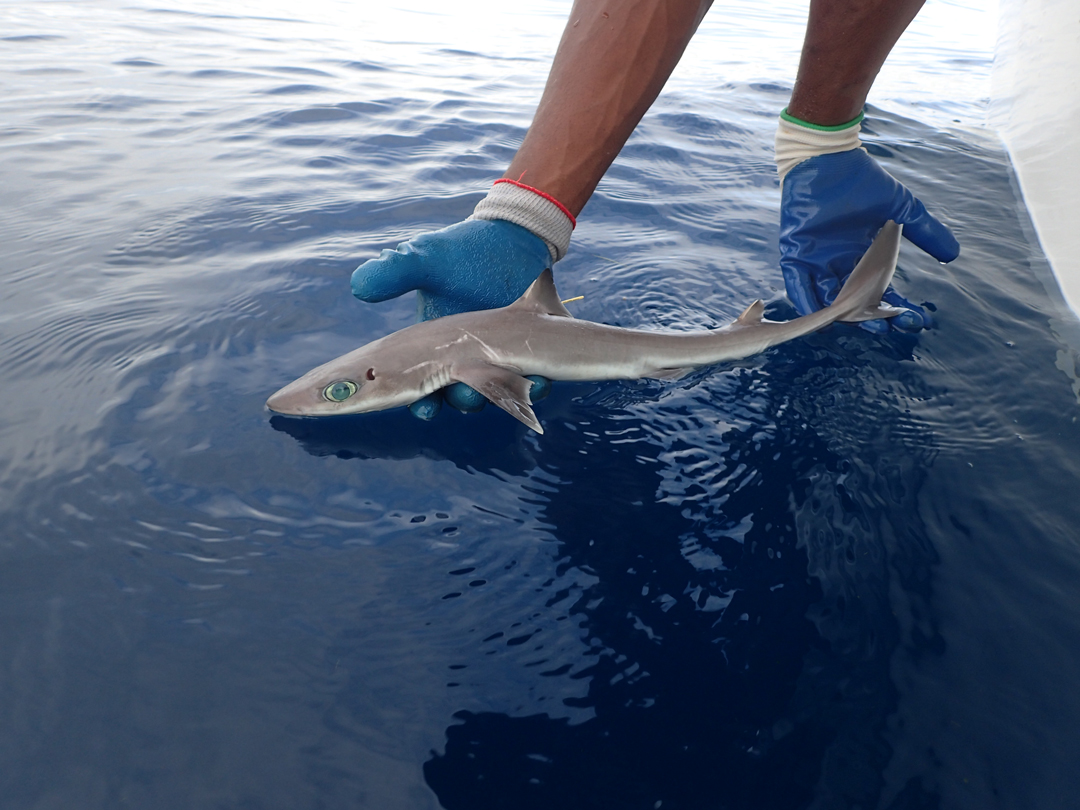 A dogfish tagged and ready for release. Photo © Ivy Baremore

Dogfishes (genus Squalus) are among the most common shark species in the deep sea, so we expected that they would be among the first sharks we encountered. However, as the months went by, we continued to be outfoxed and had not even seen one dogfish on our BRUVs. In fact, the only dogfish I had seen in three years was a tantalizing picture a recreational fisher sent me early on in the project. I have set gear in the exact location where the recreational fisher caught his dogfish, using vertical and bottom longlines. No dogfish.

So, last month, we made a week-long expedition to the middle cayes of Belize, where we had not sampled before. Dodging thunderstorms and rain squalls all week, we were able to find an underwater “bank,” where a hill of limestone pops up out of nowhere to 250 m from 700 m. Perfect sharky habitat. Setting our vertical gear along the gradient down to 420 m, we were hopeful for a big sixgill (or even a small sixgill), making sure to set our largest hooks in the deepest waters. But alas, it just wasn’t meant to be, and we pulled up empty lines. Checking the bait on the last set of the day, one of the crew noticed some small crescent-shaped bite marks on the large pieces of bonito. And that’s when I had what I think of as a Carrie Bradshaw moment.

“As I examined the nibbled pieces of bait, I couldn’t help but wonder … are our hooks too big?” Were we so focused on trying to catch large, and relatively rare sixgill sharks, that we were under-sampling the little sharks? After all, most of the sharks that live in the deep sea are tiny. 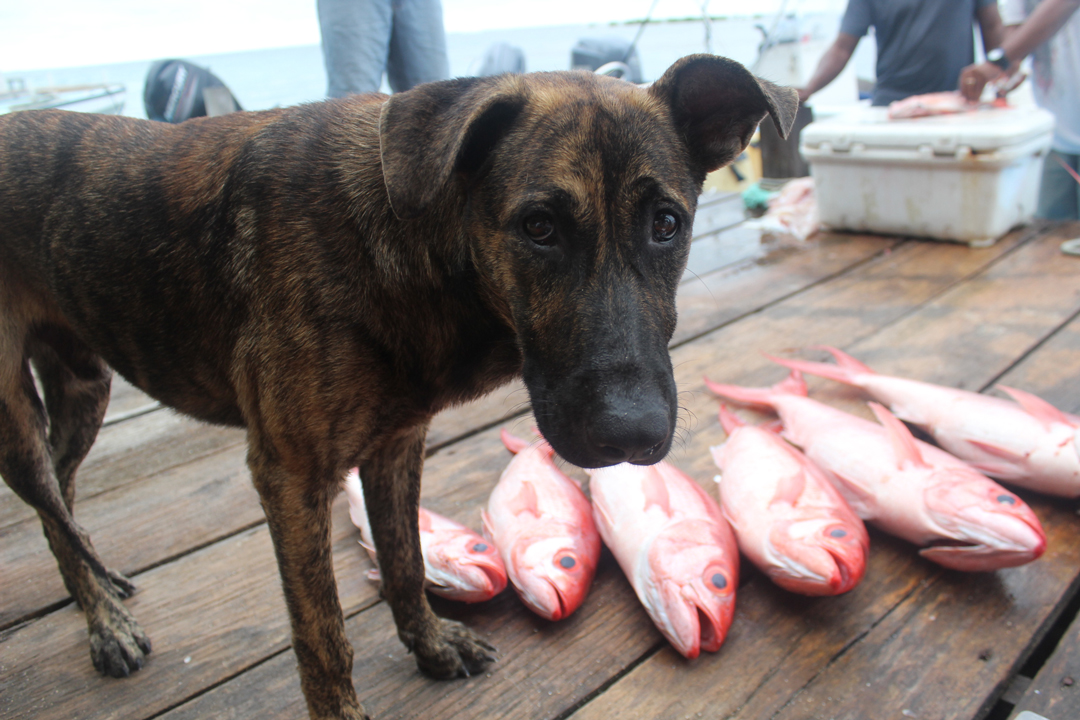 After my epiphany, I was anxious to get back to the offshore bank, but on the last day of sampling, the tropical wave that had been threatening all week properly set in, and we were restricted to near-shore activities. Heading out as deep as the weather allowed, we set our vertical lines at 400 m again, but this time with our smallest hooks. After a few wet, blustery, miserable hours, we finally got a break in the weather and our gear started fishing properly. And that’s when we got not one, but two, tiny dogfish on one line. 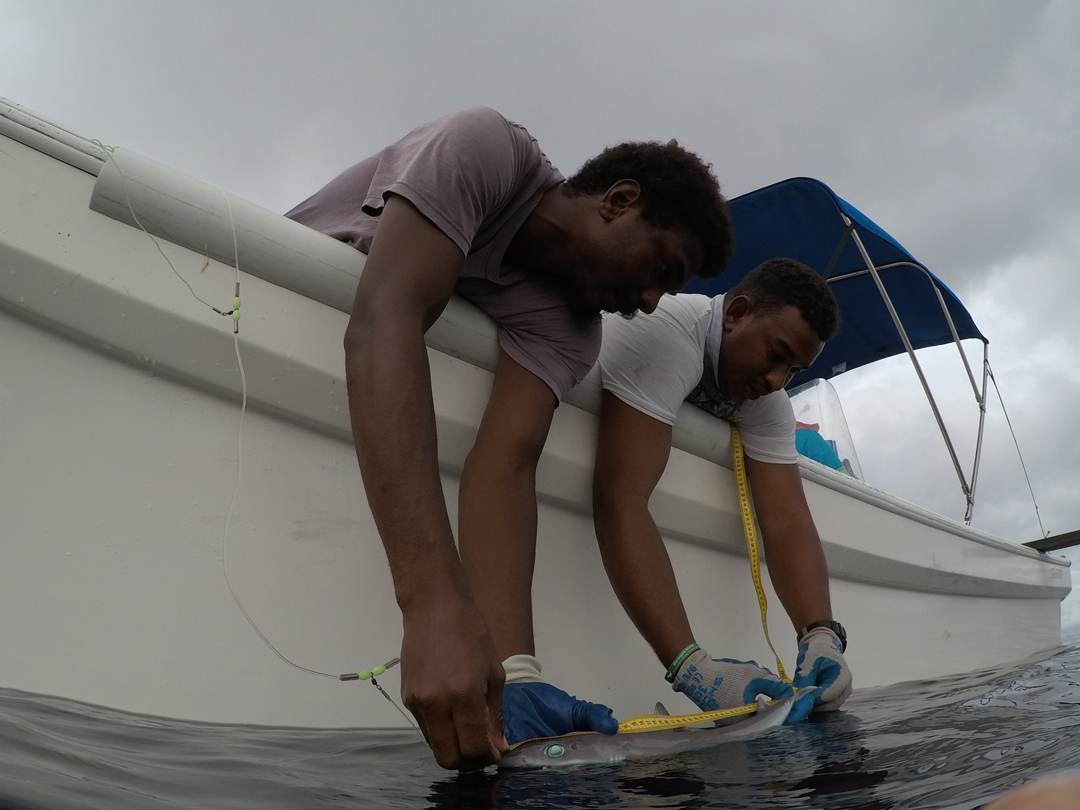 Evan (left) and Ryan (right) measure a dogfish before tagging and releasing it. Photo © Simon Gulak

The next four lines produced four more dogfish, and several missing hooks. At 56 cm (22 inches), the largest male we captured was mature, meaning that this species likely does not grow to be much bigger than two feet long. Consulting with the literature and other researchers, we tentatively believe that this species may be Genie’s dogfish (Squalus clarkae), which was recently described in the Gulf of Mexico. Named for the matriarch of shark biology, Eugenie Clark, this diminutive dogfish was previously called the shortspine dogfish before researchers used genetics and taxonomy to determine that it was a new species. In fact, it is such a new species that the paper describing it is still in the process of being published (Pfleger et al. (Accepted))! Given the uncertainty around these, and many other deep sea species, we will need to wait for genetic confirmation before we are certain of the species we captured here.

Even more exciting was the footage from the (newly rebuilt) BRUV we sent down, showing several dogfish of differing sizes. This footage, along with the missing hooks, tells us that we need to set even smaller hooks to properly sample the species.