Although we might be the Manta Trust that doesn’t stop us from trying to incorporate the collection of data for protection of other species into our work too. Since Guy began his manta sightings database, he has also collected similar information for whale sharks, an obvious extension of his work given their frequency within the atolls of the Maldives and the similarities they share with manta rays. Both species are filter feeding elasmobranchs, specially adapted to a diet of zooplankton, harmless and very passive in nature. By taking ID shots of the whale sharks found in the area, Guy has been able to contribute vital information to other organisations concentrating on the conservation of the whale shark, the biggest fish in the ocean.

To provide that unique and rare encounter for our guests, we have used a technique now regularly employed by tourism operators in the area to attract whale sharks to the back of their dive vessels. By turning on powerful lights at the stern over the water, it’s only a matter of minutes before zooplankton begins to congregate underneath. In time, and with a little luck, the whale sharks will turn up for their dinner, vacuuming up huge mouthfuls of the tiny copepods, pivoting slowly in one place as they continually suck at the surface, regardless of the crowd of faces peering down at them through a lens. We were fortunate enough to attract several whale sharks in Thaa Atoll, and for Guy and I the priority was to get that all important ID shot above the left side of the pectoral fin, where the spotty pattern is similar to our own finger prints and the underside of a manta rays belly, unique. 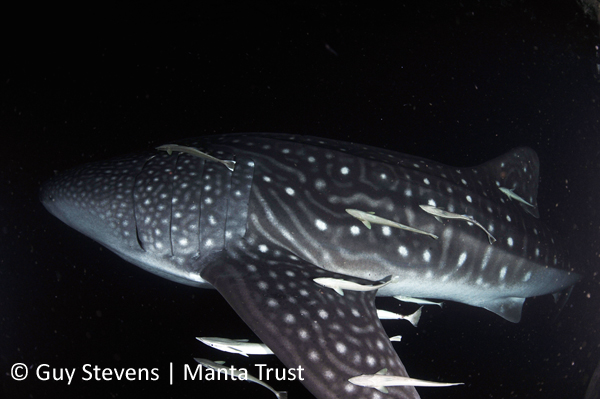 It turns out that one of the whale sharks lured to the back of our boat was not new to me. I had in fact seen him, ‘Bikuru’, before in Baa Atoll in August 2012 idly feeding in Hanifaru with over 50 mantas. I spotted Bikuru from the dive dhoni while leading a trip for the staff of Four Seasons resort. Despite living in the Maldives, many local staff rarely get the opportunity to interact with such animals and they were absolutely ecstatic to see one alongside mantas. And from the data collected so far it seems likely he is migrating in a similar pattern to the mantas, chasing his food source around the archipelago, its distribution dictated by the wind and current patterns of the prevailing monsoon. This information we are able to pass on to colleagues working on building a clearer picture of exactly where the whale sharks go at different times of the year, which in turn will help to afford them the protection they so desperately need. The whale shark is an extremely vulnerable species, possessing biological constraints similar to those of mantas, which means they can quickly succumb to exploitation.

Although fisheries for whale sharks are regulated in many countries there are still areas of the world where fishermen will target whale sharks, legally and illegally, in order to sell their various body parts. A number of other anthropogenic pressures, such as pollution, entanglement in fishing gear and other marine debris and boat strikes, synergistically act to increase the threat to this most lovable gentle giant. By learning more about the biology and behaviour of the whale shark, scientists and governments around the world are able to use a number of tools that offer a certain level of protection for the whale shark. Here in the Maldives a series of Marine Protected Areas throughout the atoll system are creating a network of ‘safe havens’ for the whale sharks where extractive activities are limited or banned. However, we know very little about how far and where whale sharks might migrate to which presents us with a stumbling block when trying to protect them. The data we can supply our whale shark colleagues will go a long way to providing that vital information and the safeguarding of this iconic species.