Having completed a three month research project on the effects of tourism on manta rays for my Master’s thesis in Marine Environmental Management last summer for the Manta Trust, I now join Save Our Seas Foundation Project Leader Guy Stevens again to learn more about the work he’s doing within the rest of the Maldives archipelago aboard his Southern Maldives Expedition.

Since 2005, Guy has been recording sightings of manta rays throughout the Maldives, using this data to learn more about their migration patterns, reproductive strategies, population size and structure. This database has expanded hugely in recent years and now consists of approximately 2,750 individuals and over 20,000 sightings with new manta rays being identified regularly. This huge source of data provides detailed information which is essential for making informed management decisions vital for the protection of this species locally within the Maldives and globally. Throughout the trip I’ve been able to experience first-hand exactly how the identification details and environmental conditions are recorded and subsequently used to give Guy more information about the manta rays both individually and collectively as a population. 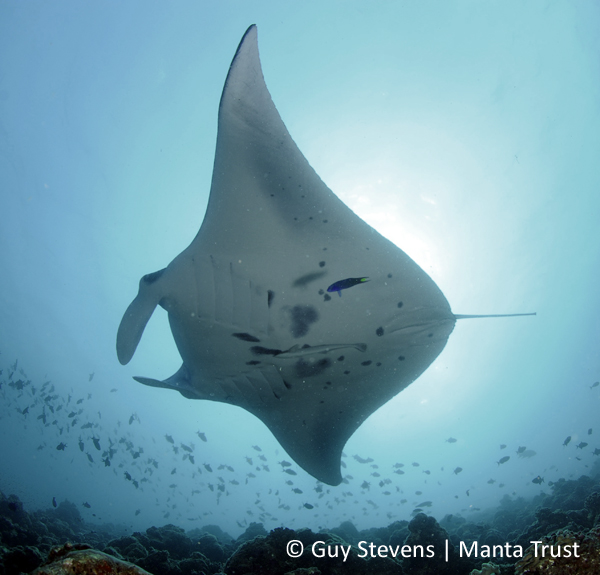 Last summer my research was conducted specifically on human interactions with manta rays in the now famed Hanifaru Bay in the northern atoll of Baa, where manta rays aggregate seasonally, coinciding with an influx in their favourite food. Some of the mantas used the sight during this time with a consistency that allowed me to be able to identify individuals on sight after a number of weeks. It was interesting then, to find that our dive with ten different mantas this morning in a southern atoll had brought us in to contact with a manta ray regularly seen in Hanifaru Bay. Searching the database, I was able to see that manta number M659 or ‘Riddle’ as she is better known, has been sighted a total of ten times since the database began and was last sighted in June 2012 in Hanifaru Bay. Looking further back in time, we could see that she has been seen for four consecutive years in Baa Atoll, all between the months of June and December (the South-West Monsoon). Riddle was first added to the database in March of 2006 in South Ari Atoll (200km south of Baa Atoll) and a sighting in 2008 during the Save Our Seas filming expedition for a BBC Natural World documentary confirmed she was also pregnant at this time. Collectively this information allows us to piece together a picture of Riddle’s movements suggesting she resides in Baa Atoll during the South West monsoon and migrates south to Ari Atoll for the rest of the year (North-East Monsoon), a trend that is well established amongst many of the Maldives reef manta rays.

Armed with the Manta ID skills Guy has taught me during the expedition, I will be able to continue this important research on future Manta Trust Expeditions, both by adding sightings to the database and collecting regional tourism data. Through the delivery of presentations and workshops, we hope to educate the divers aboard our expeditions and leave them with a much better understanding of why and how we can go about protecting these charismatic animals.