Earlier this month the Two Oceans Aquarium hosted the Southern African Shark and Ray Symposium for an exciting three days of talks and posters from some of Africa’s leading shark and ray experts. This was the 5th such symposium, held every two years around the coast of South Africa and this year from the 7th – 9th of October in Cape Town. The Save Our Seas Foundation provides much of the funding to make this a spectacular event year-after-year and this year was no exception. 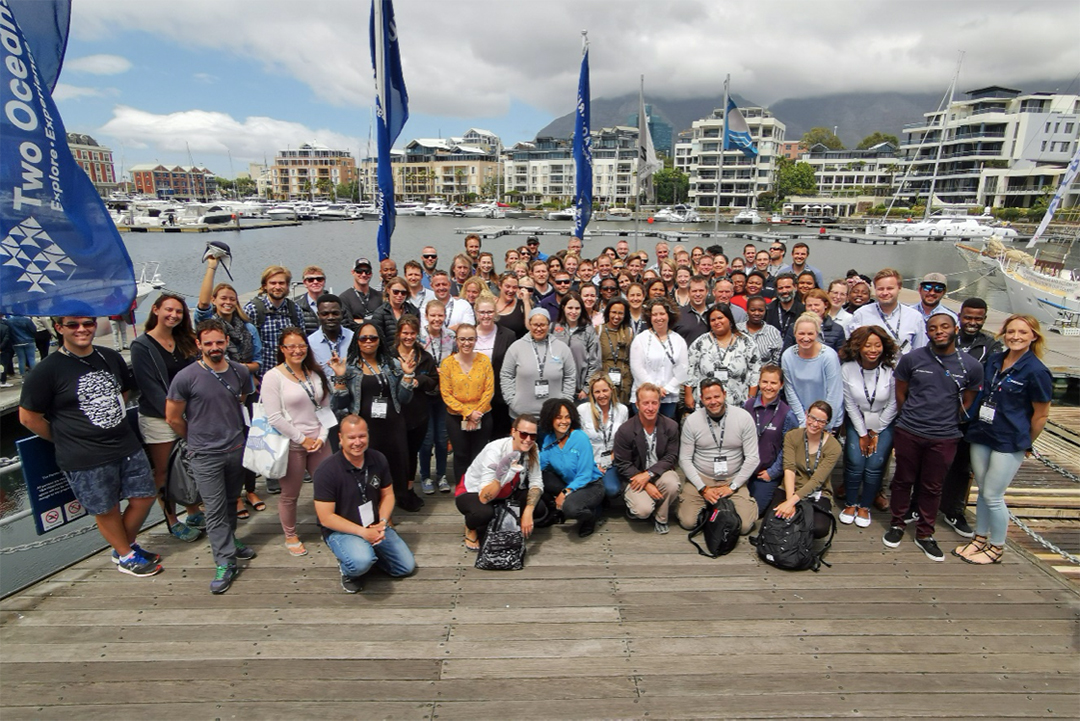 This was an especially exciting symposium for me because I got a chance to present some preliminary findings from my PhD work towards estimating demographic patterns and drivers for the southern African white shark population! I’m far from a population estimate, but I can shed some light onto the current state of the shark population here with some data from photographic identification and acoustic tagging.

I’ve written before about the work ahead with regards to matching photographs taken from several aggregation sites along the coastline; this is the critical step that allows me to generate encounter histories for individuals and estimate abundance, and the step that so far is the bottleneck for this project. While we don’t have everything matched to the individual level, we do have an idea at least of how many unique sharks were photographed each day. And this is not trivial information! Most of the research boats record how many sharks are encountered on each trip, but with multiple trips in a day, and frequent overestimation, these numbers are not so easy to use! And let’s not forget the disorganised state of some of these data sets (ahem, Mossel Bay!). I kid, for a very long time I was responsible for maintaining this dataset, but it’s difficult with interns.

After fitting a slick model to these daily sightings records we discovered significant decreasing trends in sightings for False Bay and Gansbaai, over the periods from mid-2015 to end-2018 and mid-2013 to end-2017, respectively (note that this is also where these two datasets end as my study will likely only really consider data up through 2017). This came as no surprise as this largely reflects what’s been covered so widely by the media of late. Despite this, we do see a period of significant increase in sightings in Mossel Bay beginning in mid-2010 and running through to the end of that dataset in mid-2017. 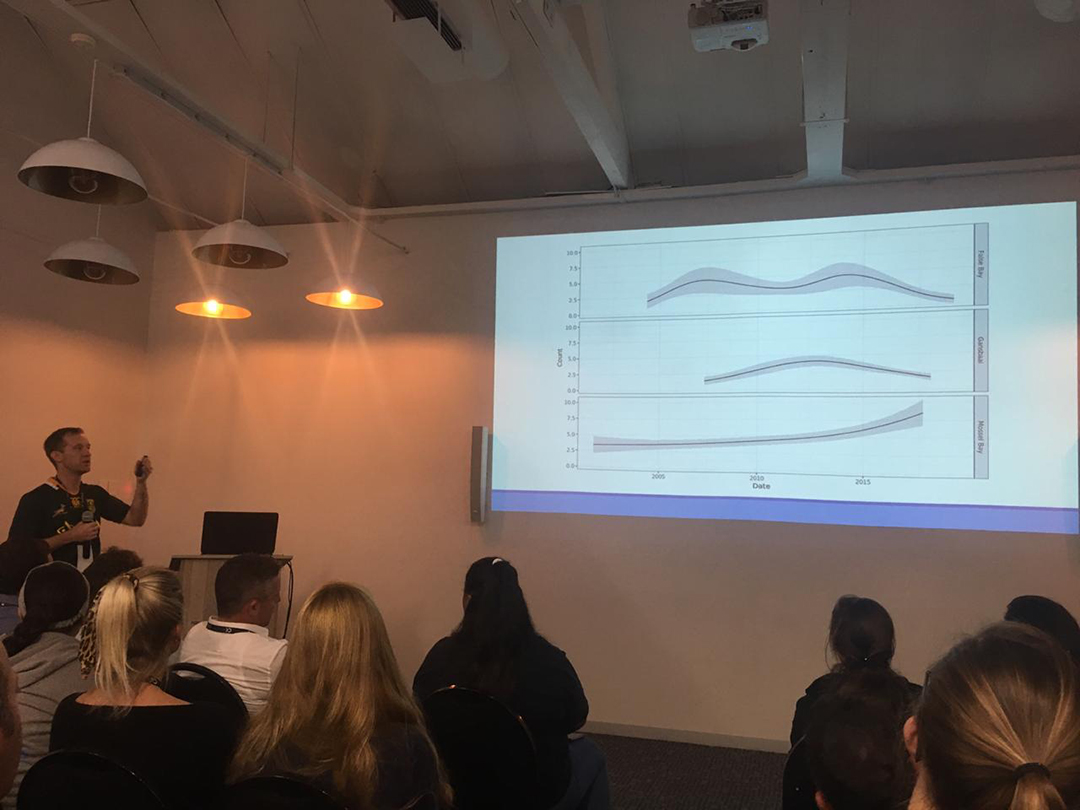 So what’s going on?

Well, it’s far to early to make any concrete conclusions from my analysis, but anecdotal evidence suggests the lack of sightings during 2019 in False Bay might be due to a shift in movement patterns eastwards. It certainly seems from the modelling above that Mossel Bay to the east, was experiencing an increase in sightings at least until 2017.

This leads to the second set of preliminary results that I presented – a multi-state model capture-recapture model of acoustic tag detections. In 2012 36 sharks were surgically implanted with acoustic transmitters that can be detected all along the coastline of southern Africa. Each of these detections is akin to a “recapture” and we can use modelling techniques to estimate things like the probability of survival, probability of detection, and the probability of moving between receiver locations. And this is precisely what we did, resulting in preliminary evidence that suggests our sharks are recently spending more time in the Eastern Cape than previously observed.

Why could this be?

Well, again it’s too early to say, but we have also seen declines in sightings of Whales within False Bay this year, and a suffering penguin population with many pointing fingers at a lock of food (sardines) for the latter. Perhaps increased catches of bronze whaler are having a similar effect on the sharks of False Bay and Gansbaai. Hopefully, we’ll be able to test this. In any event, overfishing of some kind is surely to blame for a large portion of these declines.

Some other fascinating talks came out of the symposium. Some highlights for me were Tammy Englebrecht of Shark Spotters presenting their sightings data over the years. The recent decline in sightings in False Bay is not the first we’ve seen. Though not nearly as severe, the years before 2010 also saw a decline (which we also found in the photo data). The kicker though, was that the last fatal shark attack in False Bay occurred soon after sightings began to increase again. Could we see a similar consequence when sightings begin to increase again? A sure reason to keep the Shark Spotters around and remain vigilant, even if we’re not seeing anything in the water right now.

One of the excellent keynote addresses came from the great guys at the Wildlife Conservation Society. They shared on-the-ground evidence of our underestimate of the impact that artisanal fisheries are having on the population of sharks and rays in the Western Indian Ocean. Mike Markovina told me he could show me many pictures of white shark fins from sharks caught in Tanzania. A worrying thought in the wake of a recent white shark catch in Mozambique. How many of our sharks are ending up there?

All told, another excellent symposium! Finished off with an interesting workshop on presentation skills complete with an eccentric live-action roleplaying of the Battle of Trafalgar. And of course, the Gala Dinner!