When you can’t fall asleep at night, do you count sharks? With over 450 kinds of sharks (the exact number is debated – but there are definitely a lot), there are really a lot of choices to help you fall lazily into a dreamy, peaceful sleep. From the small epaulette shark, which lives in the shallows, walks on its fins and sucks up worms . . . to the biggest fish in the ocean, the whale shark. The whale shark is huge, but it’s a peaceful animal that cruises around filtering the water for zooplankton. 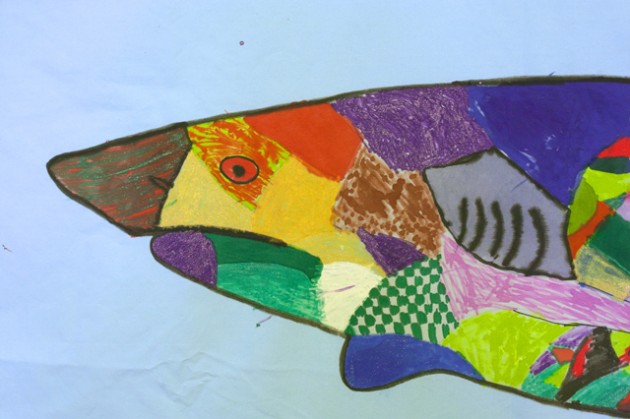 A closer look at the blacktip reef shark

This is a picture of a a twin-sized bed sheet, decorated with a life-sized blacktip reef shark created by nine to eleven year old children during a "Shark Science" class we recently taught in Portland, Oregon. We taught the students for a week. First we shared our new movie The Shark Riddle. Then we shared activities based on the movie – from investigating shark teeth to feeling shark skin to making shark hats. Then we asked an important question to the students: "How do you want to share your knowledge of sharks with other children?" They created this mural by coloring with fabric markers, and they decided which facts were important to share with others. The kids used a bed sheet because they really liked "The Shark Lullaby" that I wrote for the movie, during which I sing a song about sweet, shark-infested dreams. I created the song because I thought it was a hilarious concept, but also because the soundtracks of most shark films are heavy with minor tones and scary music. I wanted to write a song that was completely opposite of what you usually hear. You can hear The Shark Lullaby from The Shark Riddle by clicking here.

These students thought that creating a "shark sheet" for a bed was a great idea. Why not think about sharks when you fall asleep? Here are some highlighted facts they wrote on the sheet. 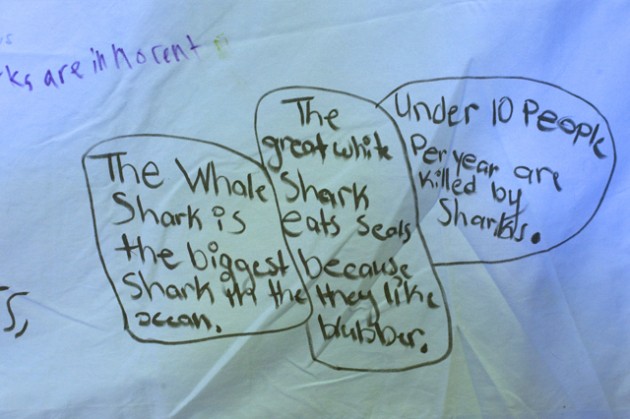 Over 100 million sharks were killed by people last year.

On average, less than 10 people are killed by sharks each year.

We should protect sharks not kill them.

Sharks have 5 to 7 gill slits on the sides of their heads.

Shark skeletons are made of cartilage.

Sharks have been around since before dinosaurs.

The whale shark, the biggest fish in the ocean has very tiny teeth.

The basking shark is the second biggest shark in the ocean.

Sharks do not kill people on purpose.

Great white sharks eat sea lions because they love the taste of blubber.

There are over 400 different kinds of sharks. 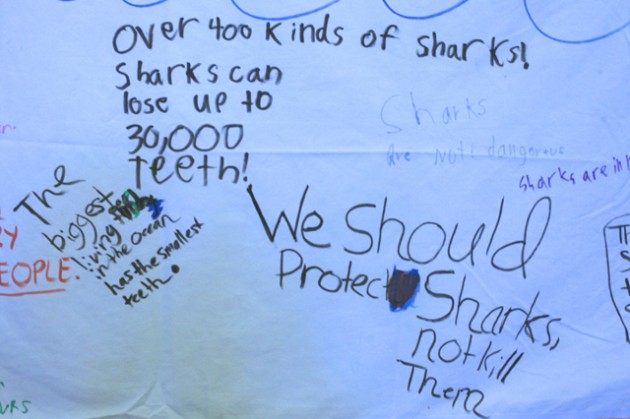 Robert and I will share this mural with other students, as we travel around the country showing The Shark Riddle through our Shark Days Events at schools, museums and aquariums. If you want to make your own shark mural, get an old sheet. Trace the shape of a shark on it, and start coloring with fabric markers. It’s lots of fun! And if I may say so, I would have liked to have a shark sheet on my bed as a kid.