South Africa was the first country to protect the iconic great white shark, almost thirty years ago, in 1991. However, unlike some other countries with large white shark populations, such as the United States, there has been no notable increase in the population over time. A great deal of media attention and speculation has been extenuated around the topic of where and why Southern African white sharks have gone (or moved to). Headlines about white sharks are often dramatic, generally misleading, and the articles answer questions with an opinion as opposed to science. 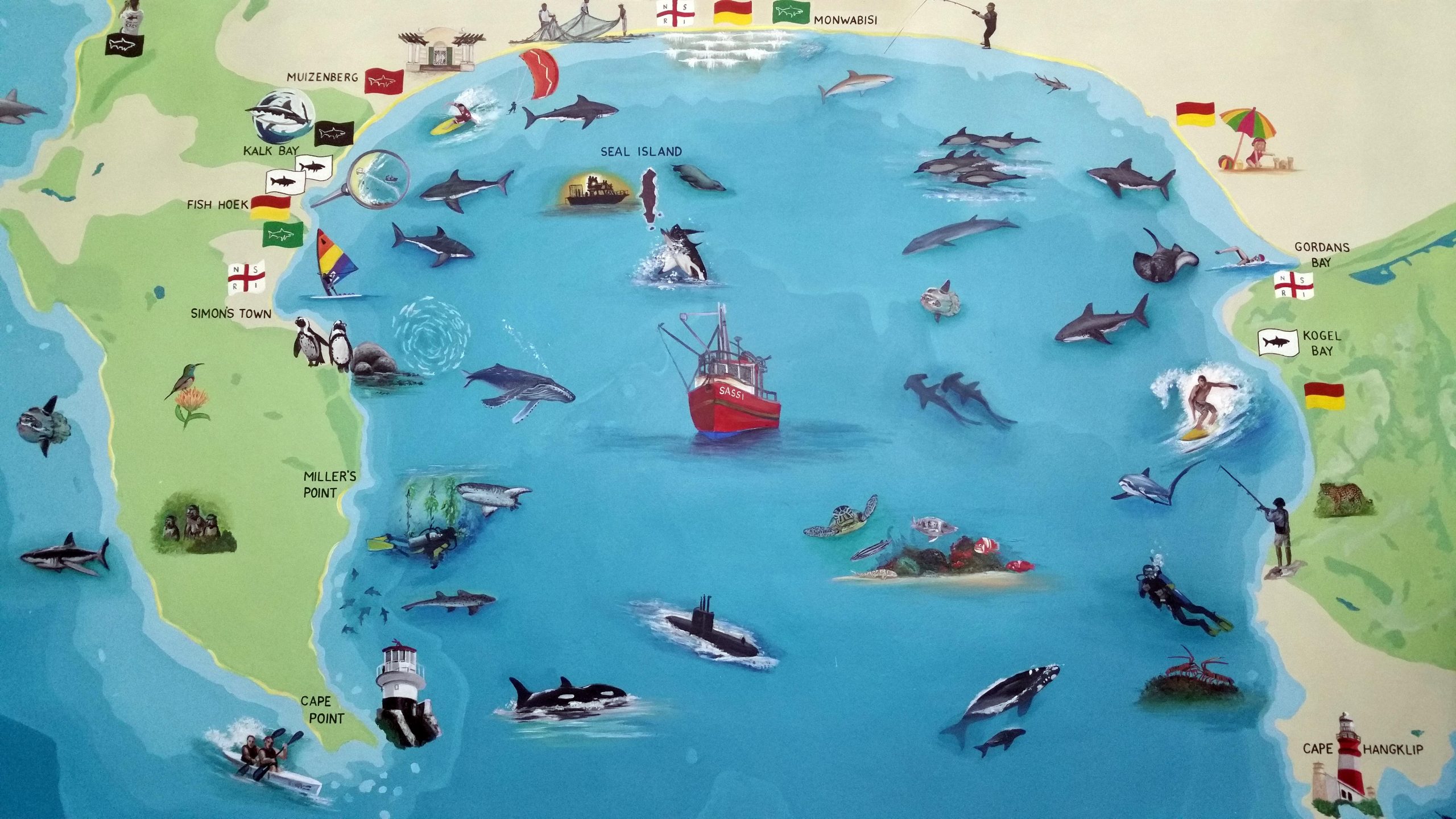 Mural in our Information Centre, Muizenberg. © Photo by: Shark Spotters

Changes in white shark numbers have recently been observed in False Bay and Gansbaai in the Western Cape, these aggregation sites were largely considered the epicentre of the species distribution in SA. The scientific community are currently debating two theories as to why white shark numbers have changed:
1) It is evidence of a population decline in the species or
2) It represents a distribution shift eastwards driven by altered food, fisheries pressure, environmental conditions or predation by orcas or
3) a combination of these all.

Ongoing monitoring of the population through sightings records and tagging, in addition to analysis of existing data, is essential to determine what is happening. The cascading effects of the absence of white sharks in both regions are already manifesting ecologically with changes in seal and mesopredator shark behaviour being documented, as well as economically, with white shark diving operators suffering significant socio-economic losses. Furthermore, resource conflict has arisen in Gansbaai with no protection of the mesopredator shark species (bronze whalers) which are effectively carrying the cage diving operations when the white sharks leave for extended time periods. 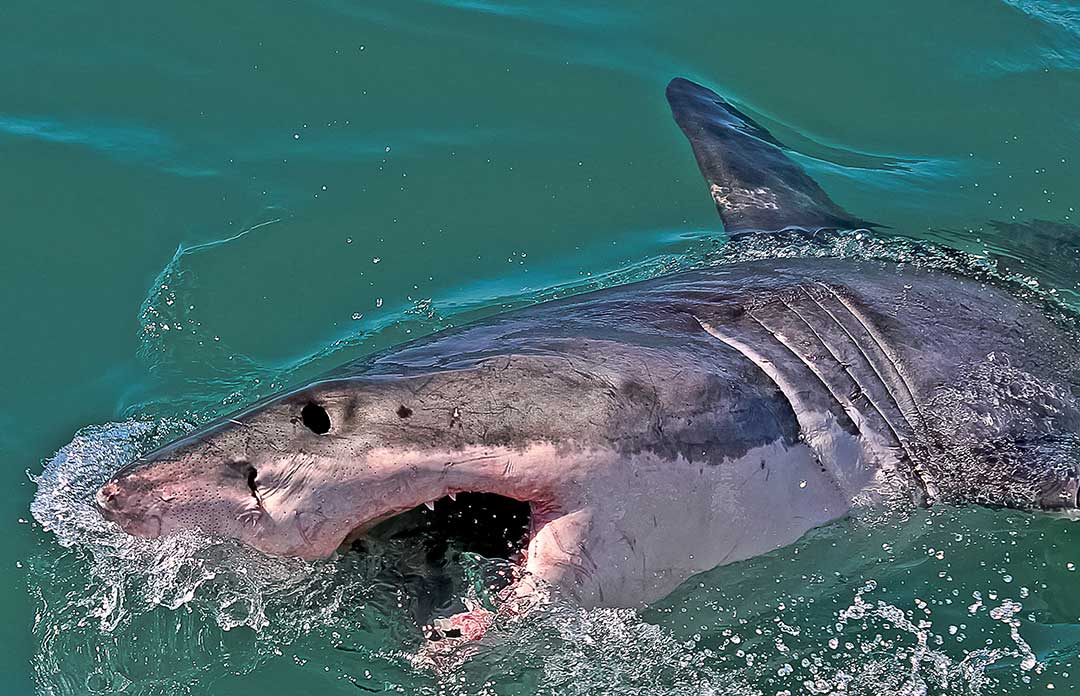 Great white sharks are exceptionally complex animals to study and understand. First of all their large size means it is extremely tough to handle them for tagging and fitting tracking devices. Secondly, like many sharks, they change their foraging and behaviour as they age. Isotope studies have revealed that young of the year (pups) and juveniles eat predominantly fish whereas subadults and adults eat more mammal, cetacean and squids. Thirdly, they use space differently as they age, with youngsters showing more coastal movements and older white sharks becoming increasingly more pelagic (spending long time periods trans versing deep open ocean basins). Finally, to complicate things further, males and females also show differences in their habitat use, and seasonal presence –  there are even individual differences in behaviour and space use to consider in the species.

South Africa has the Acoustic Tracking Array Platform (ATAP) which consists of over 120 underwater acoustic receivers deployed from Angola to Mozambique. This network of receivers spans South Africa’s coastal zones, from depths of 5 to 60 m. ATAP connects scientists from a range of different marine disciplines and geographic regions, providing them with the opportunity to share tracking data on various tagged marine species (see my previous blog). This white shark tagging research project, funded by the Save Our Seas Foundation in collaboration with ATAP, aims to expand this array further, adding more receivers and tags on white sharks specifically at the Southern tip of Africa, where there is a considerable gap in the network. 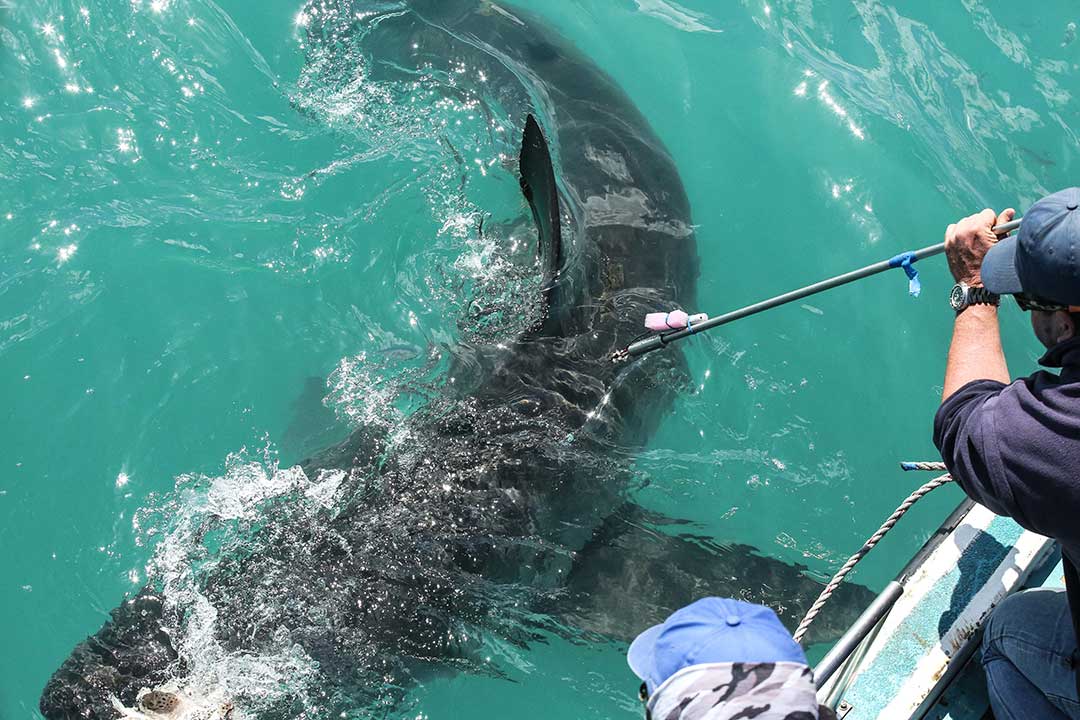 This research project, with Alison Towner from Dyer Island Conservation Trust as PI of the white shark component, is a multi-species approach aimed at quantifying potential regime shifts, to advise and mitigate detrimental marine cascades which can happen as a result of altered species abundance and distribution. Furthermore, this information will be used to facilitate the most effective protection of these fragile marine ecosystems by informing the government on critical areas of habitat use. The white shark tagging data will be analysed in conjunction with killer whale, penguin, and bronze whaler shark data, using a combination of boat-based, satellite and acoustic tracking methods. The key objectives will be to understand the movement patterns of these species and how these animals influence one another. The research will combine expertise from scientists to provide a comprehensive picture of how Western Cape marine ecosystems are responding to a complex mix of pressures from environmental, fisheries and prey species removal as well as predation from killer whales.

Multi-species collaborative science is powerful.  A recent paper published in Nature involved the combined efforts of 150 shark scientists, of which the PI’s of this research project are co-authors. Examining the overlap between 23 shark species and industrial pelagic longline fisheries revealed startling results. Despite their protected status, the shark species showing the highest space use overlap with PL fisheries was the iconic white shark. Furthermore, the most threatened population globally was identified as Southern Africa, revealing a 64% space use overlap with pelagic longliners in the Western Indian Ocean. The study urges better protective measures for the SA white shark -particularly observer presence onboard fisheries vessels, and pro-active use of tracking data by the government to enforce laws. The research would not have been possible without tracking data, which provided irrefutable evidence for these trends. In this light, continued shark tracking data is also needed at this critical time to advise policy on the placement of any new Marine Protected Areas along the SA coast and offshore. 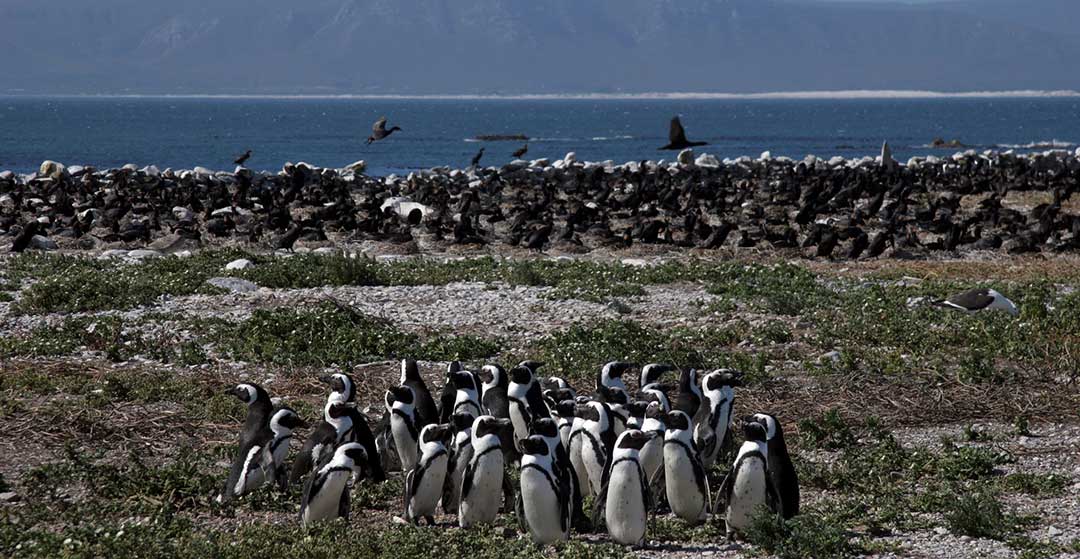 Flight responses and extended avoidance of areas by sharks, including white sharks, in response to orca predation, have been documented in False Bay and Gansbaai. The relationship between white shark abundance and presence with other predators such as Killer whales is complex and very likely related to a mixture of factors. For example, removal of shark species by longliners may alter white shark distribution and may cause killer whales to seek more coastal shark species, but only through tracking repeat migratory behaviour of these predators can such conclusions be verified.

Effective protection measures such as better management of resources through fisheries policies, or more extensive and more accurately placed MPAs must be implemented. White sharks are critically important apex predators in Southern Africa’s marine ecosystems, as well as a major drawcard for its growing Blue Economy.  Live white sharks have an extremely high economic worth, in ecotourism value to South Africa, socio-economic studies are indicating as much as 67 305 500,00 USD/ 1 Billion ZAR per annum. More importantly, the absence of the white sharks has an important and potentially devastating impact on other species such as the endangered African penguin which may experience increased predation by Cape fur seals. Should the research be able to answer the questions we seek, we can only hope with this science to influence policy at the government level. This research will provide missing information on the occurrence of white sharks along the south coast of South Africa and provide insight into the interactions between these apex predators, their prey and killer whales. 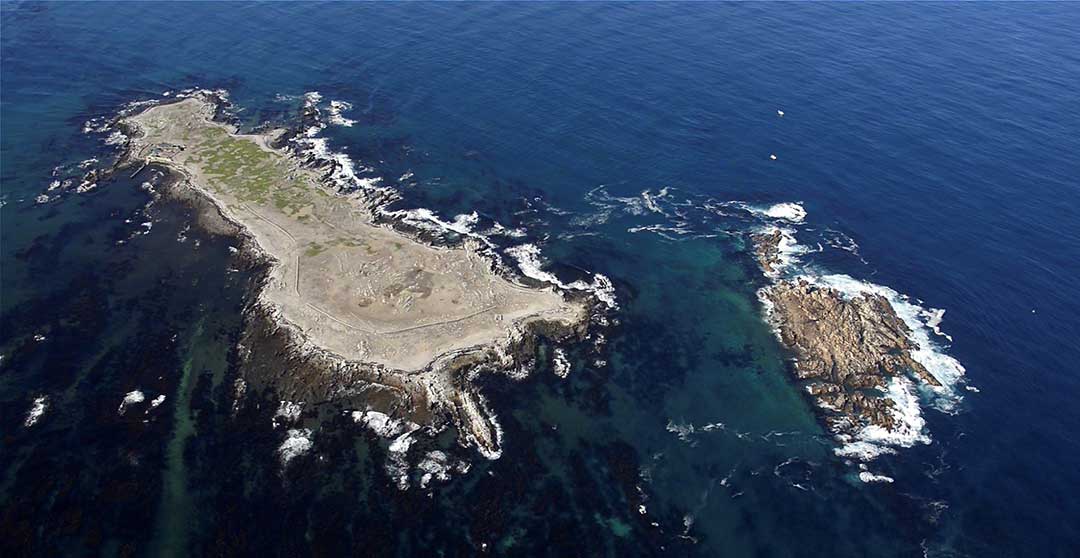