If you see us twirling with arms wide atop the Grand Teton Mountains (or at least twirling over-enthusiastically in our office chairs), it is because The Shark Riddle is one of three finalists for Best Children’s Program at the 2011 Jackson Hole Wildlife Film Festival. We are up against some steep competition – My Pantanal, by Panthera, and Turtle Vision, from nWave Pictures Distribution. But alas, we are thrilled to be part of the competition! Robert and I are preparing for our journey to the festival at the Jackson Lake Lodge, in the middle of the Grand Teton National Park in Wyoming.

We are taking daily baths in moose repellant, running relay races to see who can lace his/her hiking shoes more quickly, practicing our firm yet friendly handshakes for all that networking and, of course, staring at movies without blinking for 30 minutes at a time – so we won’t miss any moment of the wonderful films in this year’s festival.

Internationally renowned as the largest and most prestigious competition of the nature genre, this year’s Festival competition included 510 films from more than 30 countries entering — a record number of submissions competing for 22 special category awards. More than eighty judges from North America, Europe, Asia and Africa participated in the preliminary selections.

The 2011 award winners will be selected by a distinguished panel in Jackson Hole preceding the five-day industry conference held in Grand Teton Park at the Jackson Lake Lodge October 3-7, and will be announced at a Gala celebration on Thursday, October 6th. We are excited. In the meantime, I’m starting to get dizzy from all this excited twirling in my chair. Plus it makes it hard to type, since I can only type as I swing around past the keyboard in my chair-twirling-frenzy. 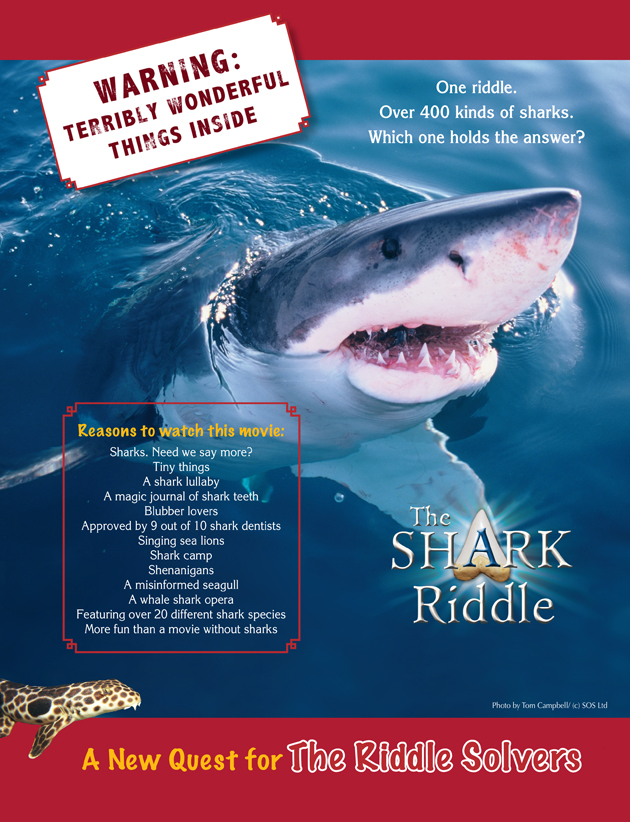 In the meantime, do you want to see what has made The Shark Riddle one of the three best nature-based children’s programs of the year? Enjoy a clip of The Great White Shark Song by clicking here. Or enjoy a strange but alluring look at shark teeth (and shark dentists) by clicking here. Overall the film is designed to help children and their families learn two things: 1)Sharks are diverse and 2)Sharks are important for a healthy ocean. It all begins with the discovery of a magic journal filled with sketches of shark teeth, and it continues with a quest to find a tooth from the biggest fish in the ocean. Robert and I purposely wrote a script, with our colleague Dave Cain, that would give people a truly new look at sharks. For example – when we wrote music, we purposely decided to do the exact opposite of the Jaws theme – by writing a shark lullaby. And instead of learning about sharks from people in the water, we used the viewpoint of a remora fish – the fish that suction cups its head to the sides of sharks for a free ride. I really think the movie is one of the most marvelous, musical and magical films about sharks ever made for children.