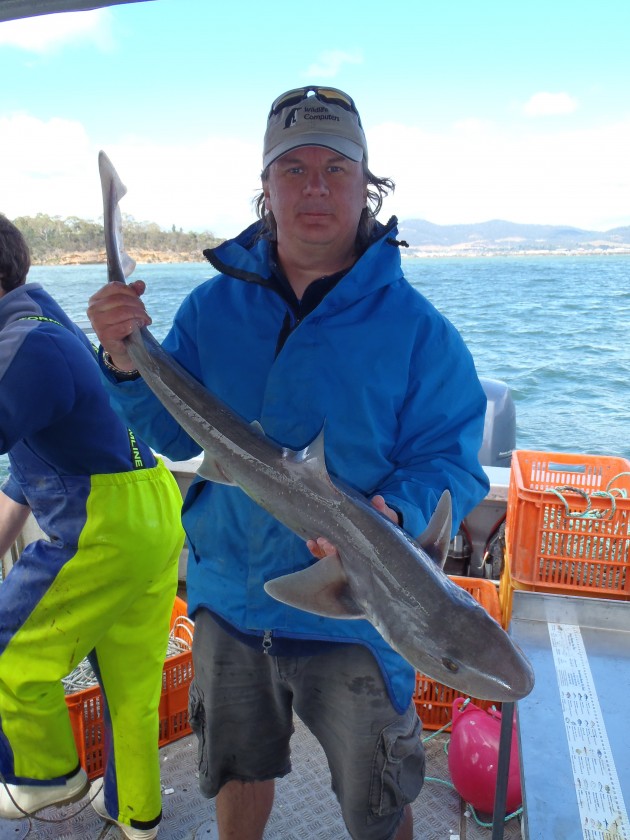 Jayson holding a captured gummy shark After a slow start it has been a very busy and productive summer. We have been in the field for most days since mid-January and it has paid great dividends. Over 600 sharks and rays have been captured and catch rates in the shark nurseries examined. A large proportion of these sharks have been neonate school sharks (Galeorhinus galeus), which are currently categorised as overfished in southeast Australia. We have acoustically tagged 40 neonate school sharks, along with over 20 gummy sharks (Mustelus antarcticus), which are the main target of the southern shark fishery. We are hoping to wrap up tagging later this week or early next week, with the addition of a few more gummy sharks. Sharks are being tracked with both fine and large scale acoustic listening arrays, with their tags to provide data for up to 5 years. Our first data download has just been undertaken and a preliminary examination suggests that all the tagged animals are moving around the nursery area and providing lots of data. We are excited to get stuck into some more in-depth analysis soon. I look forward to telling you all about the data in the near future – Jayson