Shark attacks are high profile events which can negatively impact coastal tourism and public perceptions of sharks, often leading to the use of mitigation methods which are harmful to the marine environment and wildlife. A new study shows that white shark presence at two popular beaches in Cape Town is significantly related to environmental conditions, and proposes that a greater understanding of the behaviour of large, predatory sharks can be used to increase water user safety in a pro-active and environmentally friendly way.

The researchers described their findings in a paper published online July 16 in PLOS ONE (http://dx.plos.org/10.1371/journal.pone.0068554). The study analyzed 378 white shark records from two popular beaches, namely Muizenberg and Fish Hoek, over a five year period. These data were collected by dedicated observers from the City of Cape Town’s Shark Spotter Programme. Statistical models were used to predict the likelihood of spotting white sharks at these beaches under different environmental conditions.

“We tested a range of environmental variables, and found a significant relationship between the probability of a white shark sighting and water temperature and lunar phase”, said Kay Weltz, lead author who conducted the study as part of her MSc research at the Marine Research Institute, University of Cape Town. Weltz explains that “the trends were consistent for both beaches with the probability of shark sightings increasing rapidly as the water temperature exceeded 14°C and approached a maximum at 18°C, where after it remained high. Models predicted an 8 times (Muizenberg) and 5 times (Fish Hoek) greater likelihood of sighting a shark at 18⁰C than at 14⁰C. Lunar phase was also significant with a prediction of 1.5 times (Muizenberg) and 4 times (Fish Hoek) greater likelihood of a shark sighting at new moon than at full moon”. The authors propose that these relationships are most likely due to an increase in abundance or better hunting conditions of their natural prey. A significant increase in the number of shark sightings over the last 3 years was identified, but it’s not clear whether this increase reflects an increase in shark numbers, a change in distribution or activity patterns. 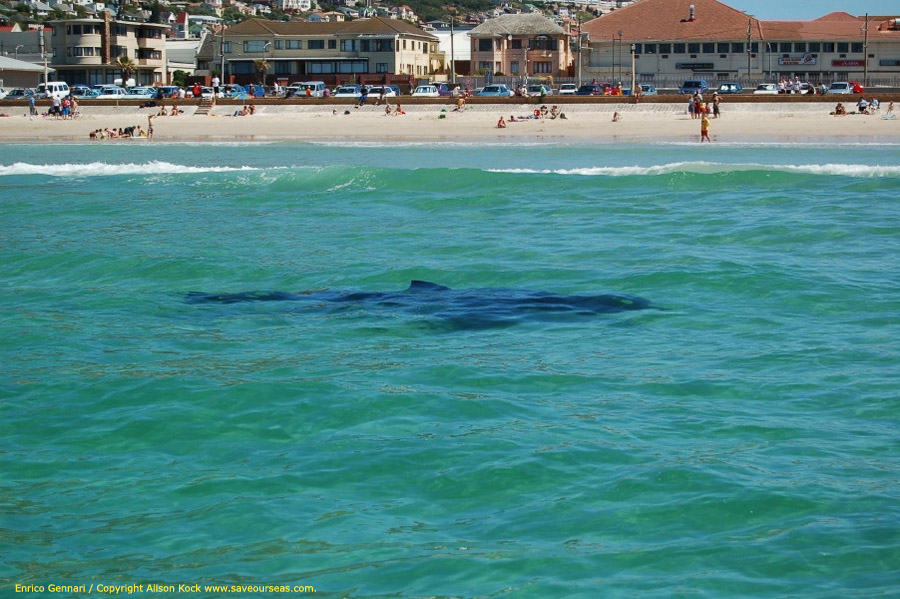 White sharks are regularly sighted in inshore areas of Cape Town. This picture was taken in Fish Hoek in 2006 from a research vessel. (c) Alison Kock

Alison Kock, co-author and research manager of the Shark Spotter programme explains that “at a time when shark populations around the world are facing increasing threats from overfishing and habitat destruction, there is less justification and support for measures which involve the killing of large sharks, especially as the large-scale removal of top-order predators may compromise marine ecosystem functioning with undesirable ecological consequences. The more we study this white shark population the more we understand that their movement and behaviour is not random. There are patterns and rhythms to their behaviour – areas, times and conditions of higher or lower encounter probability, and we can use this information to reduce the risk of negative shark encounters. However, I think there are challenges in getting the information out to as many people as possible, and then seeing whether the information is used or whether it’s simply too tempting to surf or swim when the conditions are ideal”.

Previous research from the area already shows that there is a strong seasonal pattern in inshore occurrence, with peak in occurrence for juvenile and sub-adult white sharks over the spring and summer months when fish and other shark prey are most abundant in the area. Furthermore, most sightings (more than 70%) are beyond the surf zone in deeper water, so limiting time in this area will also result in a decrease in risk of an encounter. The authors conclude that increased monitoring of environmental variables and the addition of prey occurrence and behaviour in the models are likely to identify more patterns in shark behaviour. Furthermore, trends are likely going to be different for other species and areas and therefore it’s important that research is conducted in those areas to understand the local situation and apply it to directed shark safety and awareness campaigns.

In addition to Weltz and Kock, the co-authors of the paper are Dr. Henning Winker and Prof. Colin Attwood from the Marine Research Institute, University of Cape Town and Monwabisi Sikweyiya, the field manager of Shark Spotters. This research was made possible through the funding of the Shark Spotter programme by the City of Cape Town and the Save Our Seas Foundation, as well as local business support.

Shark Spotters
Shark Spotters is a pioneering shark safety programme in Cape Town, South Africa that improves public safety while simultaneously conserving a threatened apex predator. Shark Spotters scan coastal waters for sharks from elevated positions during daylight hours, seven days a week, 365 days a year at popular Cape Town beaches. A protocol using four informational flags and a shark siren warn water users of the nearby presence of sharks. Upon hearing the warning, water users are encouraged to exit the ocean and wait until the Shark Spotter gives the “all clear” before returning to the water. The programme provides jobs for local South Africans and conducts applied research on the population of white sharks in Cape Town, in addition to driving strong education and awareness shark safety campaigns.