My brother Rob and I just returned from performing two Shark Riddle presentations during Shark Conservation Week at the Oregon Coast Aquarium in Newport, Oregon. First, it was totally awesome to perform with a tank full of sharks (leopard sharks, sevengill sharks, soupfin sharks, smooth-hound sharks, spiny dogfish) behind us. We showed The Shark Riddle on a screen that hung down from the ceiling, and during The Shark Lullaby, I really enjoyed watching real sharks swimming behind the movie, while I was singing “There are hundreds of species of sharks, waiting to give you pleasant dreams.” Second, it was exciting to be near the aquarium’s replica of a megalodon shark jaw — the extinct shark that was big enough to eat whales. Yes, whales. You see a megalodon shark tooth in the beginning of our movie The Shark Riddle, so it was a great tie-in to the film.

We were able to be part of Shark Conservation Week due to a grant from the Save Our Seas Foundation, who sponsored our live presentations at the aquarium, and funded great giveaways like shark posters, shark hand tattoos for kids and our life-sized inflatable basking shark. We met one boy named Cody, who was SO excited about sharks, that he immediately ran up to us to share that for his birthday . . . all he wants is a shark tooth necklace. We hope he uses some of the fun birthday activities in our Shark Packet as part of his festivities too! The packet has links for shark cupcake toppers, shark hats, shark bookmarks and outdoor shark games. 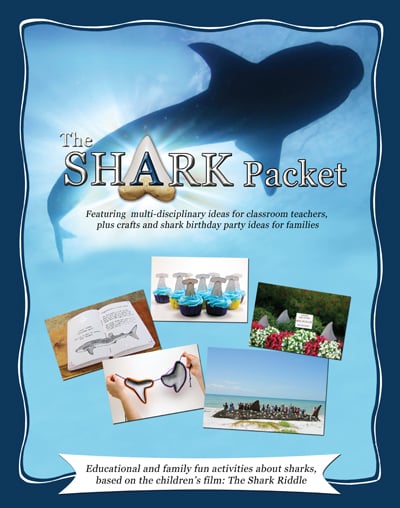 Cover of The Shark Packet

Shark Conservation Week started with a bang. On Saturday, over 2000 people had entered the aquarium by noon. We, of course, can’t take credit for all of that — we were part of a slate of activities, including a presentation by Ruth Musgrave, author of National Geographic Kids: Everything Sharks, as well as presentations by Ron Houchens, an artist who showed people how to draw a shark. You’ll see my magnificent drawing below.