Sharks have gotten a lot of conservation attention in recent years, in part because of well-documented population declines, particularly of certain species in specific places. These declines have primarily been driven by commercial fishing, both target (fishermen going out to catch sharks) and bycatch (fishermen catching sharks when they intend to catch something else). Sharks may be harvested for their meat, fins, liver oil, cartilage, and other body parts, or if they were caught accidentally, they may be discarded back into the ocean even if dead rather than brought ashore for consumption or sale. 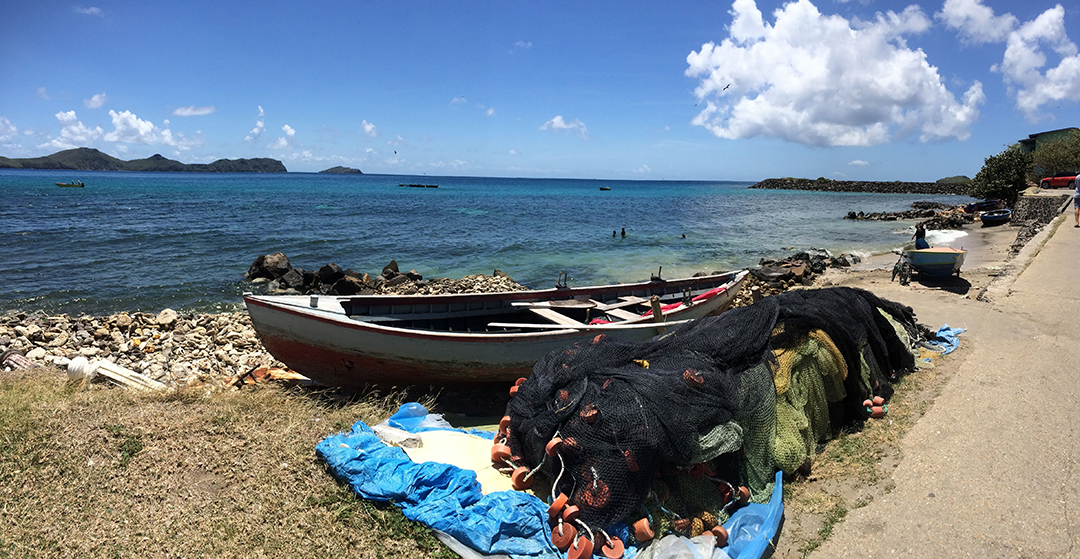 here are three primary fishing methods in Saint Vincent and the Grenadines: hook and line, net, and fish trap. Sharks are primarily caught as bycatch in hook and line and nearshore net fisheries. Photo by Christian Pankow | © Field School.

Although many people have heard that shark populations are in trouble, it’s worth thinking a little bit about why sharks are particularly vulnerable to fisheries-related population declines. In ecology, we can broadly describe species as being either “K-selected” or “r-selected”. Species that are r-selected are more likely to be small-bodied prey species that reach sexual maturity at a young age and produce large numbers of low-investment offspring, few of which survive to adulthood. A good example of an r-selected marine species is the lionfish—a single large female can release more than two million eggs per year into the water column. In contrast, K-selected animals usually have larger bodies, produce a smaller number of more well-developed offspring, and invest more energy in each offspring. They also have high levels of juvenile survivorship, which means that a much larger percentage of their young survive to adulthood. 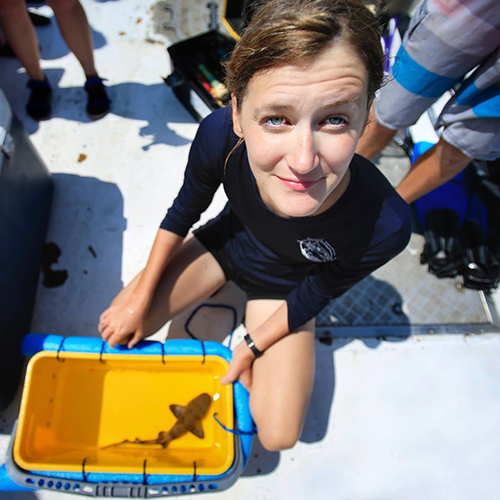 Nurse sharks (Ginglymostoma cirratum) are relatively commonly caught for food in Saint Vincent and the Grenadines. They can produce more than 30 pups every other year, but females don't mature until 15-20 years of age. I captured this tiny juvenile in a seagrass bed using a hand net, and we released her in good condition after quickly collecting samples and measurements. Photo © Cliff Hawkins.

These differences in survivorship and reproductive potential (r-selected species can create many more offspring in their lifetime) mean that r-selected species tend to see much higher natural fluctuations in the size of their populations in response to environmental factors than K-selected species. When environmental conditions are favourable for juveniles and survivorship goes up even slightly, populations of r-selected species can increase substantially in a short time, making them better equipped to recover from human-induced stresses like fishing.  Given their low lifetime reproductive potential and relatively late age at maturity, many species of sharks are K-selected and are therefore poorly equipped from a biological perspective to recover rapidly from overfishing. For instance, despite stringent conservation measures, under their current NOAA recovery plan, the population of dusky sharks (Carcharhinus obscurus) in US waters is not expected to rebuild until 2107. It can take decades for a young shark to reach sexual maturity—in fact, a recent study suggests that Greenland sharks (Somniosus microcephalus) may not be sexually mature until age 150! 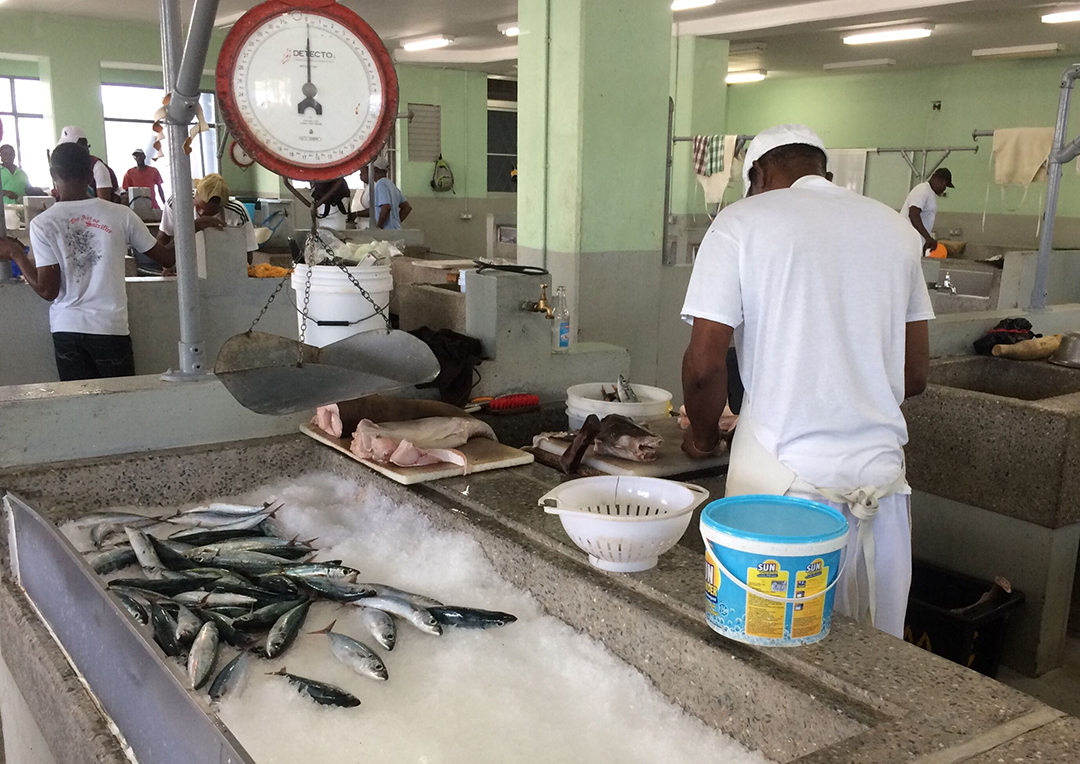 Body size is correlated with K- and r-selection, with larger, higher trophic level animals likely to take longer to mature and to produce fewer offspring. Here, we can see shark meat from larger animals as well as smaller, r-selected teleost ("bony") fish for sale in the Kingstown Fish Market. Photo by Christian Pankow | © Field School.

This doesn’t mean that all shark fishing is unsustainable at any level, because sharks are a very diverse group of animals, and many species fall somewhere along a spectrum from r-selected to very K-selected. Questions about shark fisheries take us back to my first blog post, where we talked about the difference between scientific and moral questions. Science can tell us if a fishery is sustainable (does not lead to declines or collapses of a population); it cannot tell us whether we should or shouldn’t fish for sharks. I have no argument with people who feel that it’s morally wrong to kill and eat sharks—that’s a perfectly defensible position to take. However, from a scientific perspective, we know that shark fisheries can be conducted sustainably under the right conditions and that well-managed fisheries (like that for some populations of the spiny dogfish (Squalus acanthias) do not necessarily lead to long-term shark population declines. 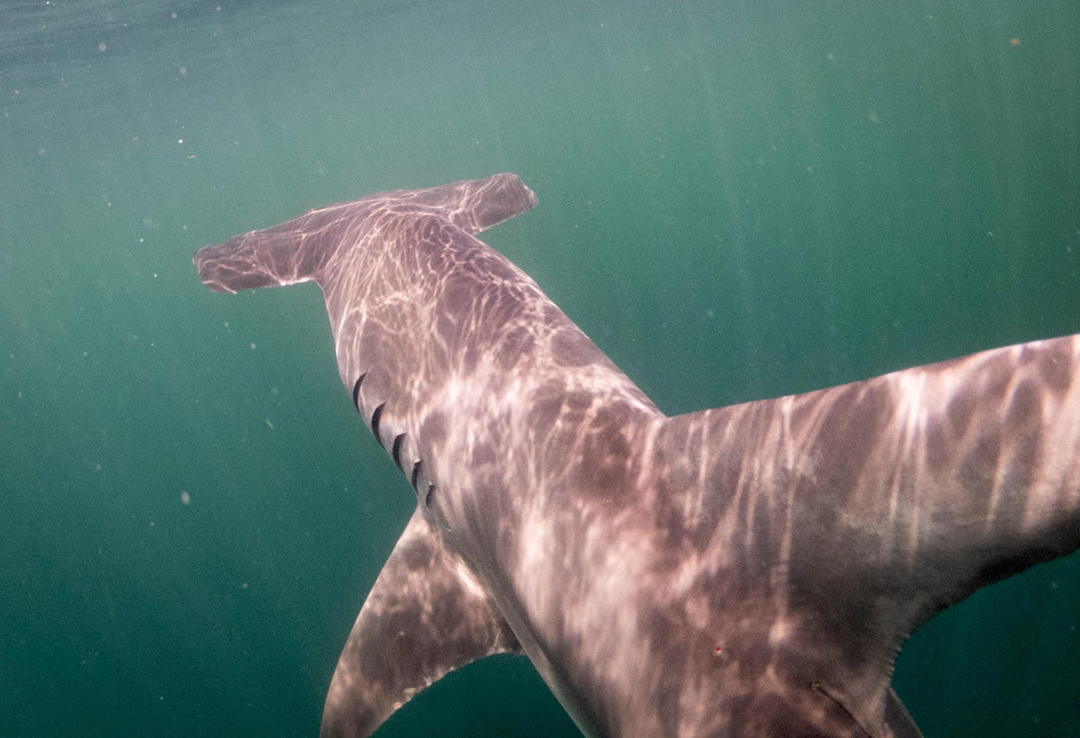 Different species of shark can give birth to different numbers of young at a time, with some species producing as few as 1-2 pups every few years. Great Hammerheads (Sphyrna mokkaran) like this one are relatively fecund for a large shark, producing up to 42 pups per litter. Photo © Cliff Hawkins.

This means there are numerous questions that need to be answered about shark fisheries in Saint Vincent in order for managers to assess their sustainability. How many sharks are being caught? Of what sizes? Of what species? How large is the overall population of those species? What do we know about the reproduction and age at maturity for these species? What prey species do they rely on? How available is their prey? What habitats do they depend on over the course of their lives? 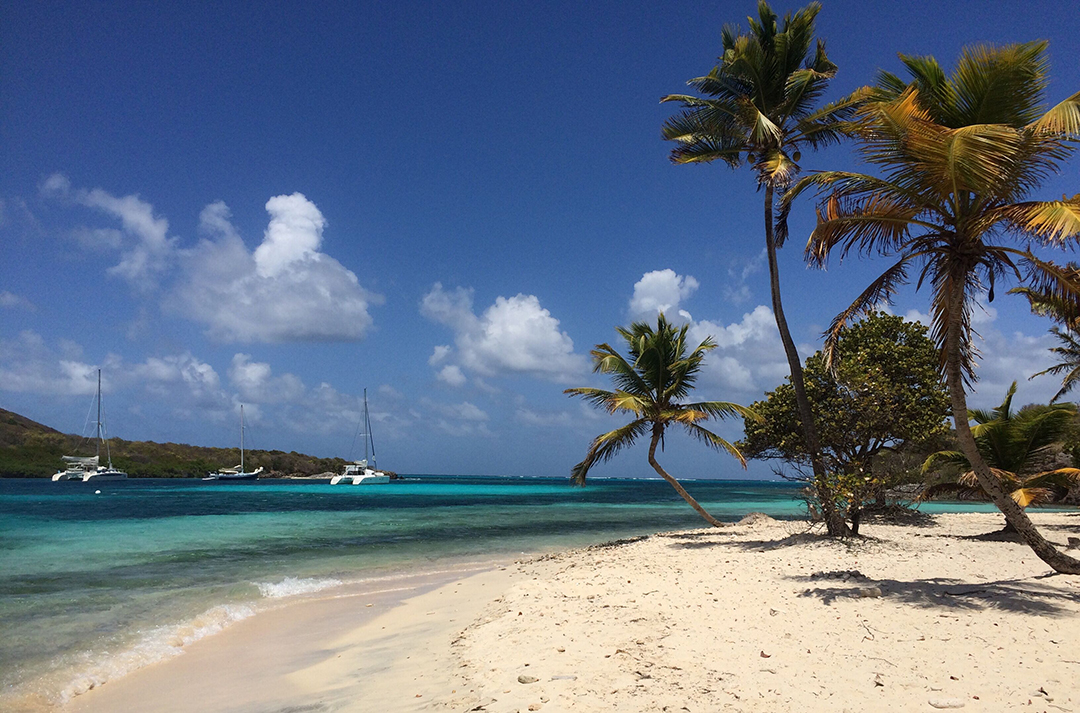 Especially in the southern Grenadines, where it is more arid and soil is less fertile than on the Vincentian "mainland", marine resources are important to food security. Photo by Julia Westers | © Field School.

Scientific management of fisheries, and assessment of sustainability, requires answers to these questions and many more. As we’ll discuss in my next blog post, one place to go in search of preliminary answers to questions like these is the local dock or fish market, where you can learn about what species of fish are being caught and sold, and how much they cost.

Project
Community conservation in the Caribbean