Last month saw the first Seychelles Sea Turtle Festival, an event organised by Global Vision International and Marine Conservation Society Seychelles with the cooperation of the Ministry of Environment and other partners. The aimed of the festival was to celebrate the magnificent creatures and raise awareness about their conservation in Seychelles. 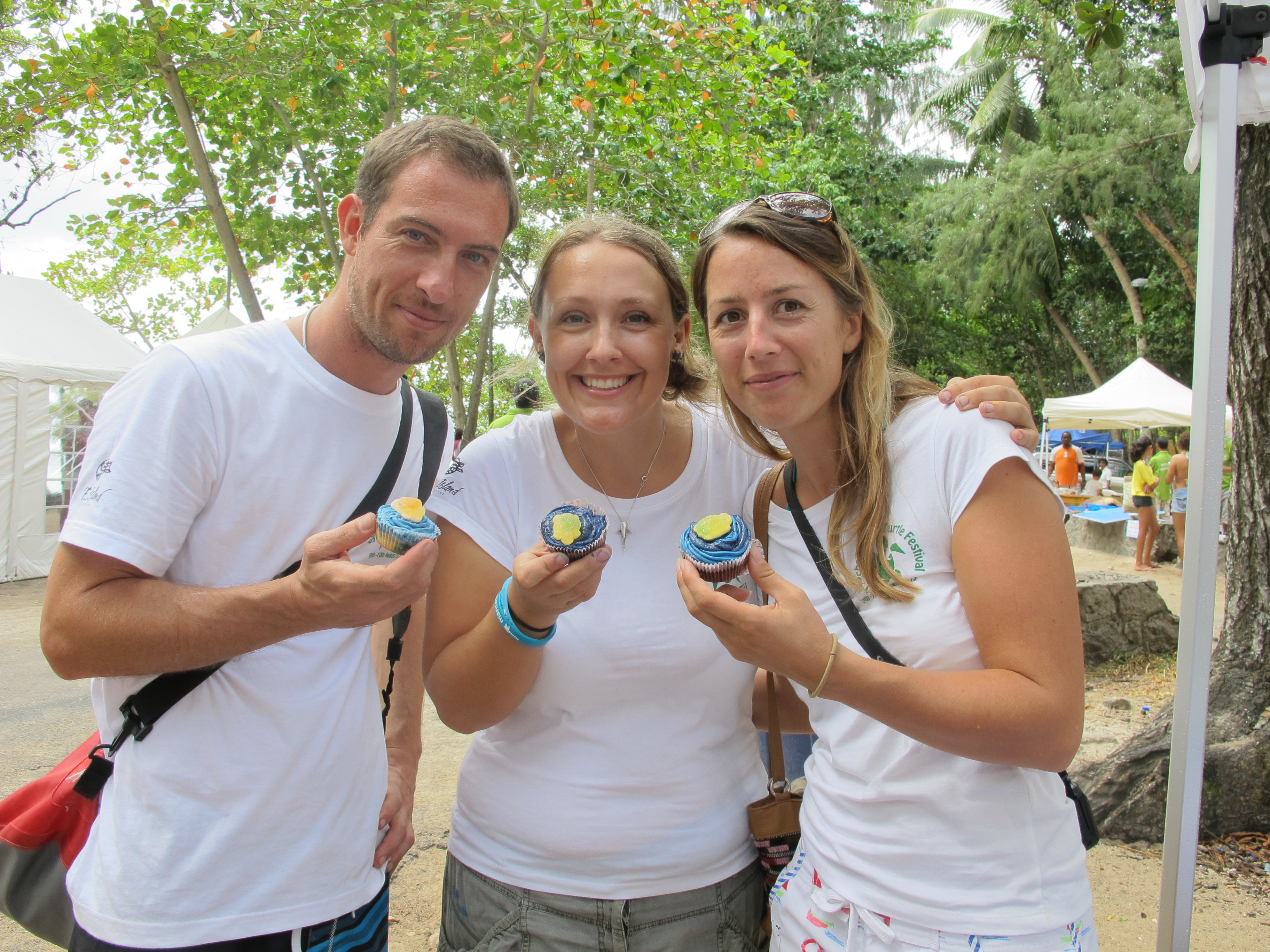 Organisers Chris Mason-Parker from GVI, Abi March from MCSS and Rowana Walton from SIF with Academy by the Sea turtle cupcakes!

The Academy by the Sea students played a big part in the festival, the group made an animated movie about ‘The Incredible Journey of Telsy the Turtle’ (which can be seen on the ‘Academy by the Sea, Seychelles’ Facebook page) which was shown as part of the opening ceremony. At the festival’s Family Fun Day, the students ran two arts and crafts stalls and sold homemade cakes.

Academy by the Sea student, 16 year old Anthea Laurence, had a very important role to play in the festival, as she describes below…

“I was chosen to be the Master of Ceremony for the first Seychelles Sea Turtle Festival along with my classmate from the Academy by the Sea, Joshua Sofola. The MC job was not new to me so I was quite at ease with this responsibility and I had a great time. The Opening Ceremony itself was very informative. I am sure that the audience learnt lots of important facts about sea turtles. The presentations have cleared up many misconceptions about the laws about sea turtles in Seychelles. During the ceremony there were prizes given to winners of the sea turtle artwork competition. I was quite astonished by the amount of entries the competition got. The number of entries really shows that the children and young people of Seychelles are concerned about sea turtle conservation. The next day of the Seychelles Sea Turtle Festival was the Family Fun Day at Beau Vallon beach. Again there was information being passed on to the public. There were different ways people were being educated: for smaller children there was ‘make a sea turtle’ with recycled materials, for older children there was snorkelling to see the place where the turtles live and then for adults there were exhibitions and for all ages, there was a huge piece of cloth where they made a turtle with their painted hands and signed their name to show their awareness of sea turtles. Elisha making her turtle handprint at the Academy by the Sea stall at the festival. Photo: Abi March

To conclude, I can say that the first Seychelles Sea Turtle Festival was a great success. I enjoyed being a part of it and I can’t wait for next year’s event!” 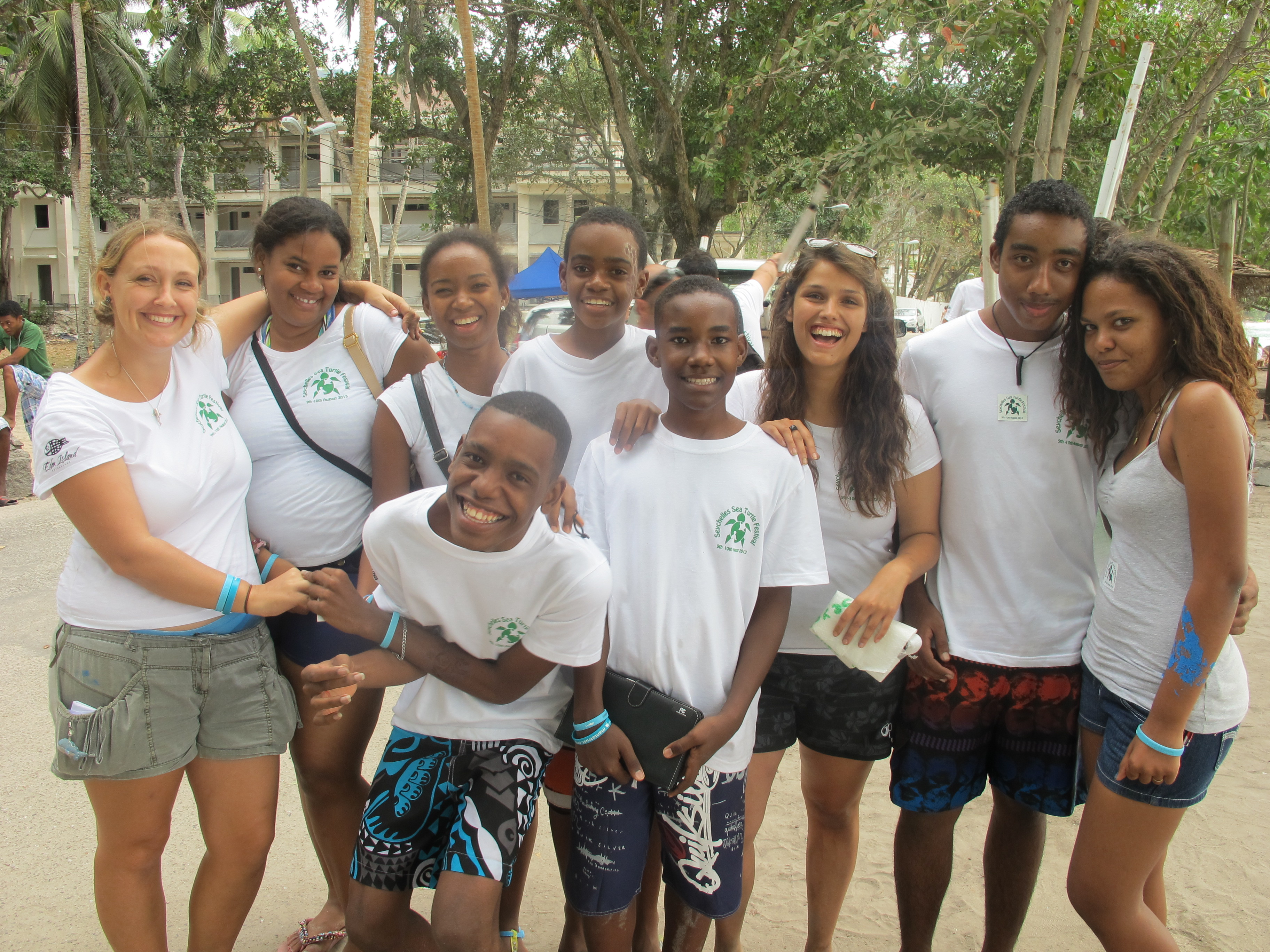 The festival was officially opened by Director General for Schools, Mrs Odile Octave with her speech at the start of the Opening Ceremony. The ceremony also included presentations from Save Our Seas Foundation and D’Arros Research Centre’s Chris Boyes who talked about the biology of sea turtles, Gilberte Gendron from the Seychelles National Parks Authority spoke about the threats and laws of sea turtles in Seychelles and Dr Jeanne Mortimer presented on the history of sea turtles in Seychelles. All the presentations were very well received and as Anthea said, it was obvious everyone learnt a lot from them.

As well as the prizes for their fantastic turtle artwork, several of the students also read out their winning turtle stories and poems and a group of students from La Rosiere Primary School sang about the ‘Turtles in the Sea’, performing the song in both English and Creole. The ceremony was closed by Minister for Tourism and Culture Mr Alain St Ange who said it was a pleasure to see such a festival organised in Seychelles. A big thank you to Anthea and Joshua for MCing so wonderfully and to all the Academy students for participating in the activities of the first Seychelles Sea Turtle Festival. It has been brilliant to help organise such an amazing event and just like Anthea, I can’t wait till next year’s festival!