Searching for the Zanzibar guitarfish

Traditional Dhow sailing on the horizon at sunset off the Zanzibar coast. Photo © David Ebert

One of the coolest aspects of researching “Lost Sharks” is the search. The search can often take one to far off exotic locations or to less exotic locations such as going through natural history museum collections; an often under-appreciated place to find new and little known species. Wherever the search might take you it’s all part of the investigative process.

Although discovering new species is exciting, many shark and ray species are known from only a single specimen, referred to as the holotype specimen that it was originally described from. These are sometimes the more interesting, and confounding, species to search for since our entire knowledge of them is based on very limited information.

Fishers in Zanzibar coming in to offload their catch at the end of the day. Photo © David Ebert

Of the Guitarfishes being researched for the current project, none has more mystique surrounding it than the Zanzibar Guitarfish (Acroteriobatus zanzibarensis).  The species was described from a single specimen in 1926. It has been suggested that this species is possibly endemic to Zanzibar or that it might be a known species, but was misidentified when it was described? One of the priority aims of the present project is to clarify the identification and taxonomy of the Zanzibar Guitarfish, which would include determining whether it is a distinct species and what is its distributional range. 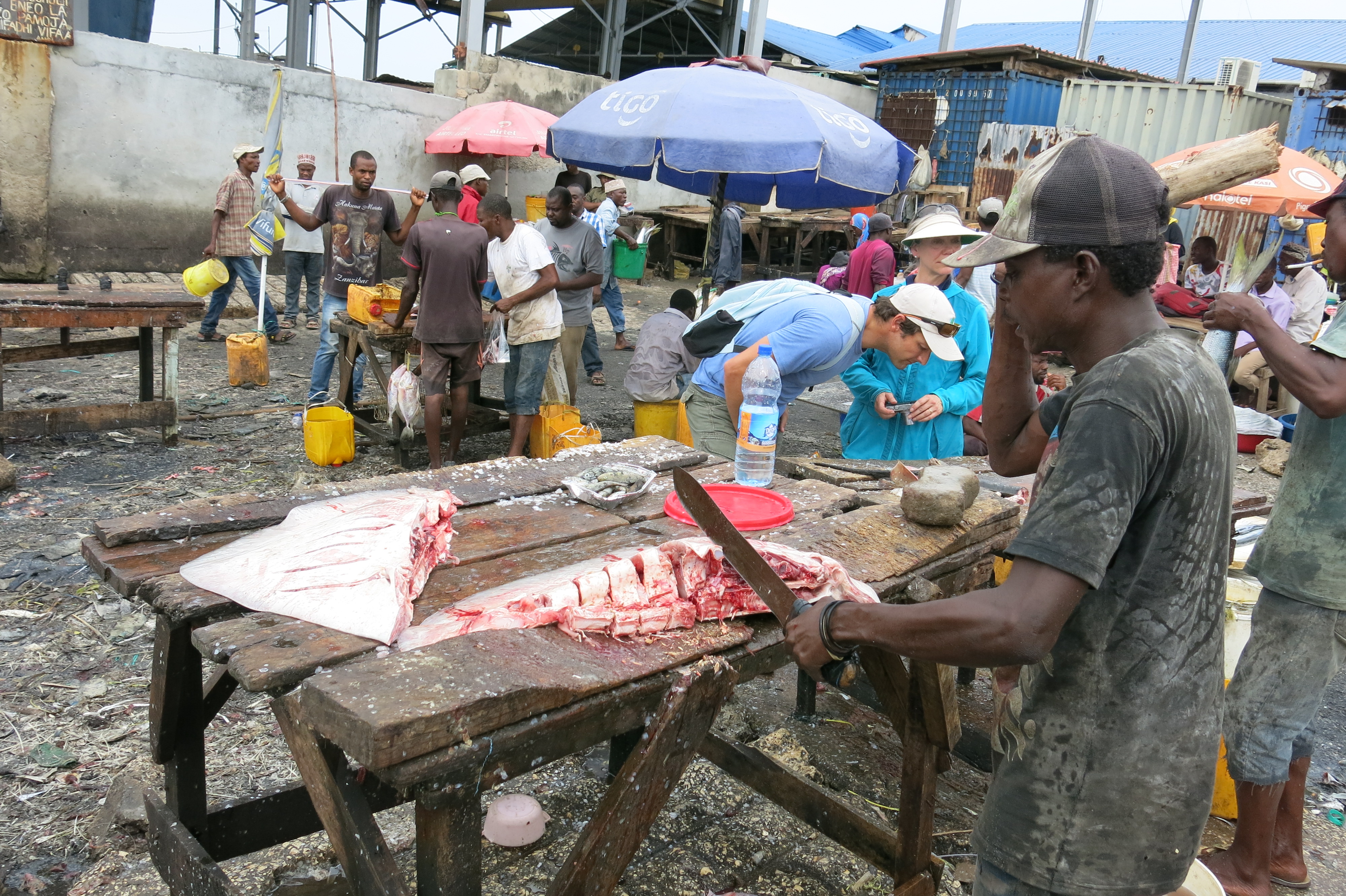 Sharks and rays given their large size are usually cut up at the fish landing sites before being sold. Here a large stingray is being prepared for market. Photo © David Ebert

Questions as to its validity and geographic range are critical for Tanzanian officials to know when developing a National Plan of Action for Sharks. Presently, the Zanzibar Guitarfish is considered to be a valid species according to the recently published Rays of the World (Last et al., 2016), but with the caveat that it is closely related to other regional guitarfishes such as the Greyspot Guitarfish (Acroteriobatus leucospilus) and that more research is required to determine its relationship to these other species.

Sharks and rays given their large size are usually cut up at the fish landing sites before being sold. Here a large stingray is being prepared for market. Photo © David Ebert

Preliminary results to date suggest that this species may be distinct, but more data is required to confirm these findings. Recent and ongoing surveys with collaborators in East Africa, including Zanzibar, have not yet resulted in any additional specimens of the Zanzibar Guitarfish. However, we are only six months into the project and photographic data is still being reviewed in addition to the fish markets and fish landing sites being surveyed for Guitarfish and Wedgefish.

Keep a watch on this project for future updates on the Zanzibar Guitarfish!