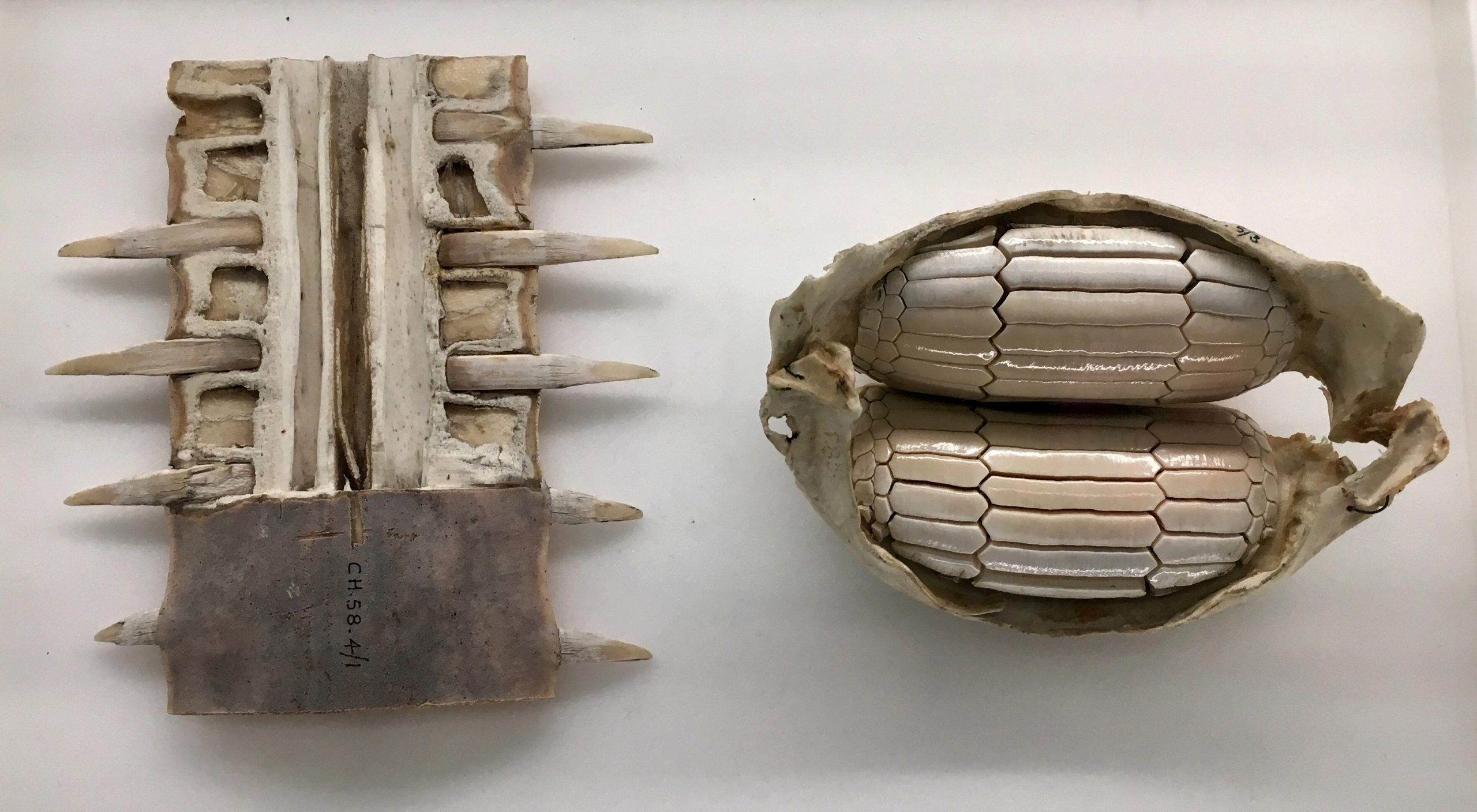 Display of a sawfish saw and ray jaws at the University of Cambridge Museum of Zoology. Photo © Nicole Philips

With travel support from the Shark Conservation Fund, my graduate student Annmarie Fearing and I were able to go to the U.K. to collect tissue samples from sawfish saws with our SawSearch partner, Kelcee Smith (Louisiana State University via support from Curtis & Edith Munson Foundation). Prior to our departure, we had identified ~300 sawfish specimen in museum collections across the U.K. Like most of our SawSearch collection trips, however, more saws were discovered during our trip and we managed to collect tissue samples from over 500 saws.

Going into this trip, we knew we were going to be visiting some of the oldest and largest collections of sawfish saws we had ever seen. What was a surprise for us, was that we were able to collect a large number of samples from specimens held in the U.K. with origins in the Eastern Pacific and Eastern Atlantic Oceans. For me personally, the most astonishing discovery in the U.K. was found in the drawers of the University of Cambridge Museum of Zoology. 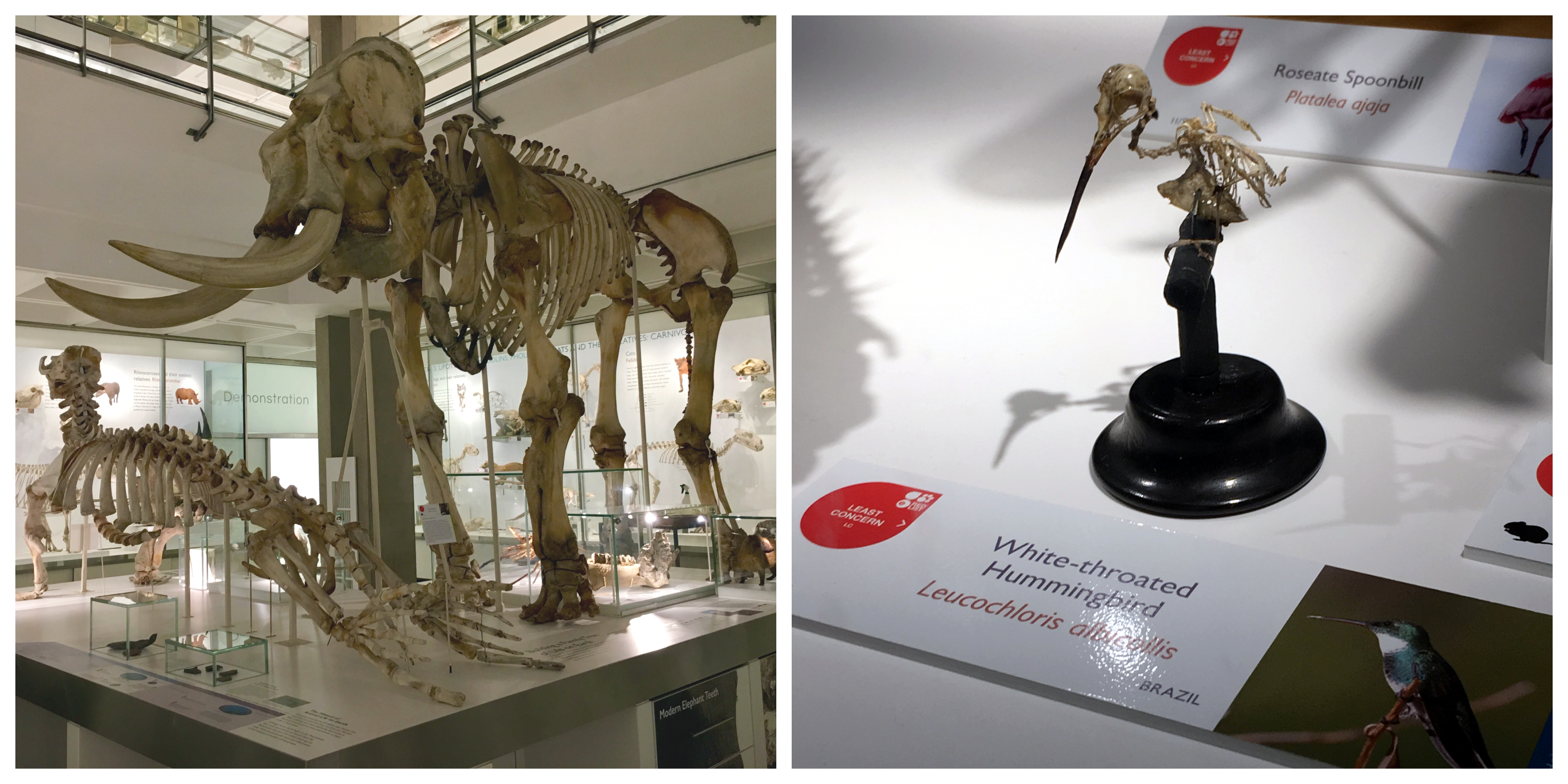 Public museum gallery of the University of Cambridge Museum of Zoology. The museum gallery was visually stunning and highly educational, highlighting the IUCN Red List of Threatened Species statuses for assessed species that were on display. Photo © Nicole Phillips

Unknown to us prior to our arrival, the University of Cambridge Museum of Zoology holds the sawfish saws Nigel Downing collected in West Africa in the 1970’s, specifically from Senegal and Gambia. Up until then, even after collecting samples from over 1,000 sawfish specimens, we had less than 10 samples from saws verified from West Africa; partially due to difficulties surrounding exporting samples from these CITES-listed species. But it wasn’t only the origins of these saws that came as a surprise; it was the number of samples we were able to collect, over 100 samples from Largetooth and Smalltooth sawfishes. By visiting this single museum collection, we achieved our target sample sizes for the West Africa region for mine and Annmarie’s project on Largetooth Sawfish and Kelcee’s project on Smalltooth Sawfish. One of the drawers at the University of Cambridge Museum of Zoology that held sawfish saws collected by Nigel Downing in West Africa in the 1970’s. The data contained within the tissues of these saws will shed light on the population genetics of these historic sawfish populations. Photo © Nicole Phillips

After months of paperwork, permitting, and waiting for the right time to ship (avoiding holidays and a U.S. government shutdown), the tissue samples we collected from the West Africa saws finally arrived safely in our lab at The University of Southern Mississippi (ESA Permit No 20590). It was the moment of truth; would we be able to extract DNA from these tissue samples? In January 2019, the samples we collected during SawSearch UK finally arrived safely in our lab at The University of Southern Mississippi (ESA Permit No. 20590). Photo © Helen Weber

Not only were we able to successfully extract DNA from these tissue samples, the DNA was very high quality, on par with samples that have been preserved specifically for DNA analysis. This DNA is some of the highest quality DNA we have extracted from historic sawfish saws. Clearly, the saws have been well cared for in the ~50 years since they were collected by Nigel. Annmarie conducted PCRs to amplify small fragments of DNA and, sure enough, we got beautiful sequences back that confirmed we had Largetooth Sawfish DNA. Such highly intact DNA will allow us to target larger DNA fragments for these samples, shedding light on the genetic composition of historic sawfish populations from West Africa. Stay tuned as we analyze these data!

DNA sequencing chromatogram for a Largetooth Sawfish saw collected from Gambia in the 1970’s.