“So, I want your ears and eyes open … I’m going to say something, and show you a picture, and the 5 fastest hands-up can tell me what words spring to mind first”

It was an exciting morning for over 120 children from Sun Valley school here in Cape Town, and one that I, at 10 years old, would have died for (but going to school in landlocked Johannesburg made discovering our oceans a bit tricky …!) The University of Cape Town was hosting a morning of marine education, organised through our Zoology Department, and we’d prepared 6 activity stations to introduce these children to the world beneath the waves. 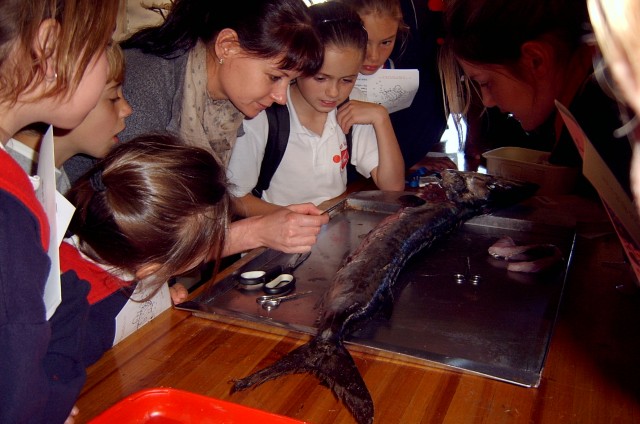 My particular mission at my activity station? To introduce these children to our incredible shark life here in South Africa, and hopefully change a few perceptions along the way …. Why? Well, let’s just say that the answers to my opening question were a little disheartening …

You see, the word I gave them was SHARK.

“Blood!” came the first shriek from a child near the front, followed by “big teeth”, “scary” and “aggressive”. Ok, so we weren’t exactly off to the best start … but this was part of what I’d expected. The children’s excitement rose, and they shot their hands into the air, yelling alternately “maneaters”, “ferocious” and “killers”.

I decided to call for silence after someone reached fever pitch excitement and shouted “death!”

I’d opened with a beautiful photograph of a Great White shark, taken by Peter Verhoog. The shark noses its way into the camera’s field of view, curiosity and power all-in-one. However, we weren’t quite ready yet to tackle perceptions of this misunderstood apex predator. Deciding that an introduction to shark diversity was first necessary, I changed slides to a photograph of a Pyjama Catshark nestled amongst the rocks on a reef here in False Bay. “So, would you then believe me (if we all think sharks are about big teeth and scary movies) if I said this is also a shark?” The room echoed with their giggles, and we decided that this little shark was aptly named. “He looks like he’s wearing stripey PJs” they called out in delight.

Not all big ‘n scary: the children decided that a shark in PJs was pretty amazing. Photo courtesy Steve Benjamin

The morning whizzed by as we met that most gentle of giants, the whale shark, and searched for a tiny puffadder shyshark hidden amonst the sand and shells on the seafloor. “I like to call these little guys Songololo sharks” I grin, and the children laugh at the reference to a South African millipede that curls itself up into a donut shape in self-defence. “So, sharks aren’t always ferocious” one child muses … 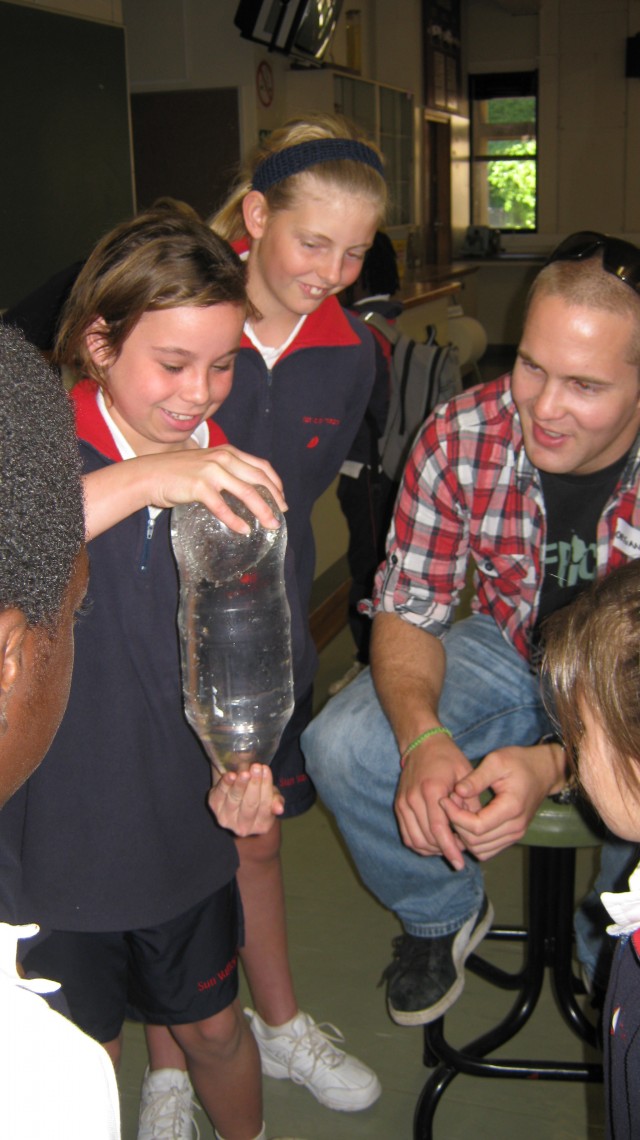 120 children had been divided into 6 groups, and they spent 20 minutes at each station. At the touch tanks, Andrea opened up the world that lives in our rock pools and everyone had to quell any qualms with all creatures slimy, spiny and spongy as they gently cradled sea cucumbers or met the cantankerous rock lobsters. By some stroke of ingenuity, Morgan had made aquaculture understandable and fun for children, and there was no squeamishness to be found at Cecile’s table where a snoek was being dissected to reveal that weird world of parasites. Across the way, Pavitray was taking a group on an ocean odyssey to meet some of the sea’s strangest inhabitants and to uncover marine diversity. Jock coloured his board with cut-outs of our South African linefish and introduced the group to the South African Seafood Initiative by means of a game. They arrived at my station breathless with excitement and clutching their newly acquired SASSI booklets. “So, how do you guys think you can help sharks using the knowledge you’ve just gained?” I asked them. Their reply was prompt: “we don’t want sharks caught as bycatch, and we don’t want to reduce their food supply by overfishing. We have to choose Green Listed species!” Some serious connections were starting to be made …

And so to my favourite part of our day, when we engaged our imaginations and slipped on our masks, snorkels and fins before plunging into the cold waters in the Castle Rocks marine protected area. Taking a deep breath, I started my little video and the children sat, cheeks inflated to the full and faces red with the effort of holding their breath for the duration of our ‘dive’. Drifting past catsharks, shysharks and Spotted Gully sharks, we swam through the kelp before coming face-to-face with the Sevengills. Breath-holds long forgotten, the children sat entranced as I encouraged them to swim around and take note of a tiny fish swimming alongside one Sevengill, and of another shark with a hook in its mouth. Indicating to them the end of our dive with my hands, we swam to the surface of our imaginary sea, and the room began to buzz once more with excited chatter.

We covered the Sharks Spotters Programme, and I was delighted to discover that many of the children were familiar with the flag system and its significance. A discussion about the threats facing sharks followed, and we reflected on decisions we could make in our everyday lives to impact sharks and our oceans in a positive way.

“So,” I concluded, putting up a closing photograph of a Great White performing a balletic aerial feat “I want the 5 fastest hands-up to tell me what words spring into your minds now when I say the word … SHARK!”

An overwhelming sense of relief came over me as the first hand shot into the air and a child blurted out “AWESOME!” The hands-up rule forgotten, the room began to chime as their voices chorused “fascinating”, “misunderstood”, “interesting”, “cool” and finally, “beautiful“.

Sharks, it seems, had been saved from JAWS.