Who’d have thought, given the quantity of literature on the use of BRUVs for documenting large-bodied and mobile fish species, that we’d be finding it useful for mobile invertebrates in False Bay?

Having watched a section of the winter samples, I’ve been captivated by the antics of the starfish, whelks, crabs and other strange creatures who’re attracted to the bait canisters. I’ll certainly dedicate a blog post to these animals sometime in the (near) future, but for the moment, I couldn’t help but want to share this one.

Slow-growing (reports of individuals as old as 50 years exist) and valued as a resource, the West Coast rock lobster (Jasus lalandii) is found from around Walvis Bay in Namibia through to East London on South Africa’s eastern cape coastline. Found (and fished) in False Bay, these lobsters are known locally as “kreef” or “crayfish” and prey on mussels, barnacles, abalone (“perlemoen”) and starfish. It’s eat-or-be-eaten in the ocean, however, and everything from octopus to seals and humans loves a lobster snack.

Rock lobsters are fished both recreationally and commercially in South Africa. Recreational fishers use hoop-nets, breath-hold diving or poling from shore to catch their quota, and can buy permits from local Post Offices. The species is protected by minimum size limits, bag limits (no more than 4 lobsters per person, per day) and closed seasons. Females “in berry” (carrying eggs) are also a no-go.

Offshore commercial fisheries use lobster traps, whilst the nearshore sector use hoop-nets. The Total Allowable Catch (TAC) is determined based on the relative proportion of lobsters distributed between the deep and shallower regions. Thus, the offshore sector accounts for 80% of the TAC and the nearshore 20%. 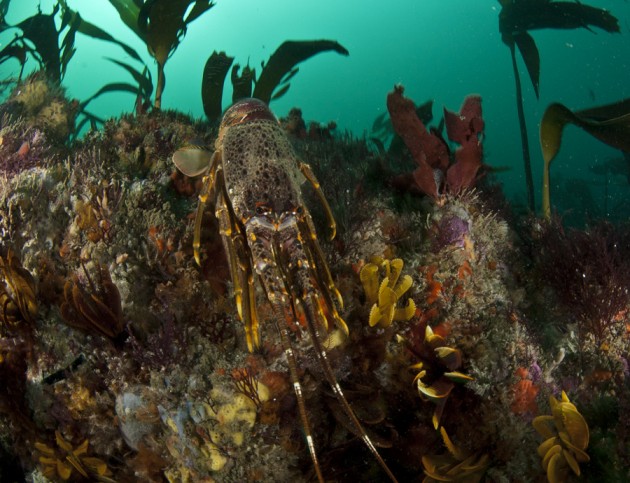 Given their value, poaching remains a serious challenge for rock lobster populations. For this reason, and in light of increasing research that highlights possible shifts in their distribution along our coastline, adequate monitoring of their population is vital.

It’s always heartening to stumble on some great sightings of this species, and if you ever thought you’d seen lobsters, take a look at this video and think again!