RecFishSA: Tagging to better understand sharks – the whens, whys and hows of tagging!

In June and July SASC’s RecFishSA tagging team attended three recreational angling competitions. In the Western Cape winter months angling competitions are few and far between because bony fish and elasmobranch catches are generally lower. But, as we love to attend these competitions and stay in touch with the anglers, SASC makes an appearance at as many competitions as we can, winter or not!

SASC attended the Rock and Surf Super Pro League (RASSPL) on June 2nd at Strandfontein near Muizenburg. The SASC team arrived, equipped with tag kits, data sheets and stretcher but alas no sharks, besides a small Puffadder shyshark (Haploblepharus edwardsii), were landed. The shyshark measured well under one meter and was therefore deemed too small for tagging purposes. It was however a beautiful winter’s day, and by no means a bad way to spend a day “at the office”.
The Two Oceans Club Cowshark Competition was held on a cold night in July at the Strand (Western Cape). Although no cowsharks (Notorynchus cepediansus) were landed, a beautiful spearnose skate (Rostroraja alba) made our attendance well worth-while (see Picture 1). The angler quickly reeled the skate into the shallows and the SASC team and anglers loaded the beautiful specimen onto a stretcher. The male skate measured 132 cm disc width. Interestingly, scientific research published by David Ebert et al (1999) found that the smallest sexually mature male R. alba specimen in their study population was 154 cm (disc width), therefore this large male was in fact not yet mature enough to reproduce. It is important we learn as much as possible about this species as age at maturity, longevity, size at birth, average reproductive age, reproductive periodicity and natural mortality are all unknown (IUCN 2006). The skate was released back into the water in less than five minutes and swam swiftly into the cold dark water.
Later in July the team attended a second RASSPL competition in the Strand area. To the delight of the SASC interns assisting on the day, a lovely soupfin (Galeorhinus galeus) shark was landed, tagged and safely released. 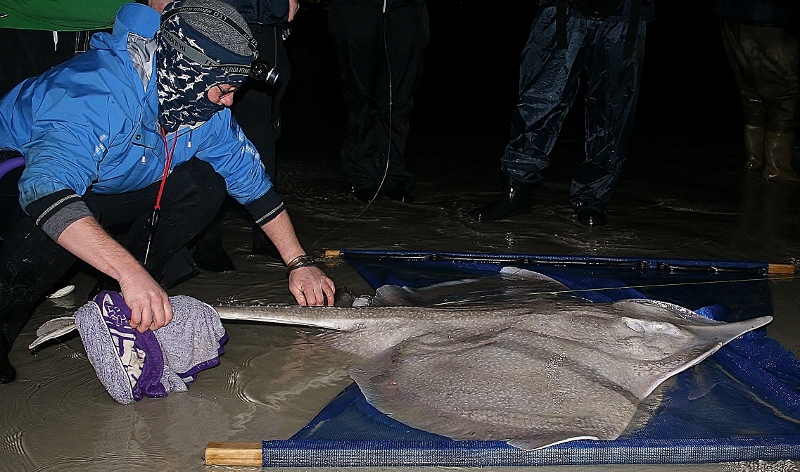 Tagging a spearnose skate: using a stretcher and working swiftly to minimize stress to the animal. 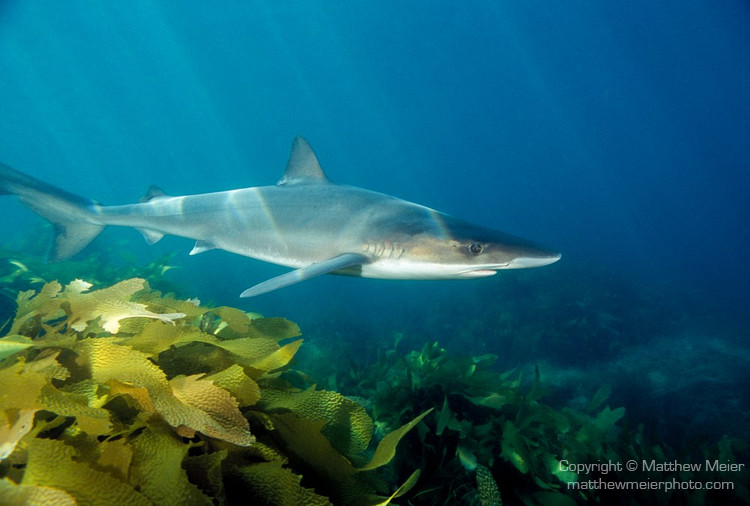 WHY DO WE TAG AT ANGLING COMPETITIONS?
The SASC RecFishSA team tags at many club angling competitions – not only because we love to hang-out on at beach and get up, close and personal with our favourite animals! Through tagging we collect a wealth of important information toward better understanding the abundance and distribution of the elasmobranchs caught by recreational club anglers, as well as better understand the post-release mortality of caught and released sharks.

WHAT INFORMATION DO WE COLLECT WHEN WE TAG – AND WHY?
Four measurements: the total length; pre-caudal length; fork length and interdorsal length are collected (see illustration below).

If the shark, skate or ray is male, the degree of calcification of the male sexual organs (the claspers) is recorded to determine the sexual maturity of the animal.
A small fin clip is collected for genetic research purposes and the animal is injected with Oxytetracycline (OTC). The OTC stains the shark’s vertebrae, and if the shark is ever caught and killed in a commercial fishery, we are able to validate the age of the shark. Scientists are able to better understand the age, growth and relative size of the sharks by analyzing the rings of the vertebrae, which are much like the annual or seasonal rings of a tree’s trunk. All of this information is extremely important in the management of the species.
Lastly we tag the shark with a conventional spaghetti tag. On the tag are contact details and a unique tag number. If the shark is re-captured, the tag will inform the fisher that the shark is part of a scientific study and he/she should collect measurements and release the shark. The fisher can then contact the scientist and relay vital information such as the size and where the shark was re-captured. From this information we are able to learn how much the shark has grown over-time as well as the distances traveled. We know that the released and re-captured shark has survived the stressors of capture and release. This is all important information for the management of the species. 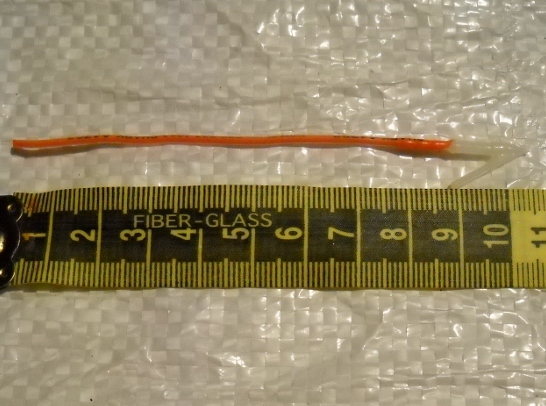 The Western Cape Shore Angling Association (WCSAA) has just released the upcoming season’s competition dates, and it looks like we will be having an extremely exciting and busy season. The next competition is scheduled in September in the Hermanus! Watch this space for the outcomes of our future field trips!