In December 2012 SASC’s RecFishSA team attended the Two Oceans Angling Club Big Catch Bronzie Festival. Organized by the Two Oceans Angling Club and sponsored by Big Catch Tackle Suppliers, the Bronzie Festival is open to any angler who has a valid recreational angling license and is willing to abide by the following rules to reduce the negative impacts of shark angling:
1. All hooks must be barbless. A barbless hook causes less injury and is easier to remove thereby reducing time out water.
2. The use of a gaff is prohibited. A gaff (a long pole with large hook used to pull the shark to shore) causes unnecessary injury to the shark. In most beach angling situations, an experienced angler should be able to land a shark without using a gaff.
3. Elasmobranchs may not be used as bait. Certain anglers use a smaller shark, skate or ray as bait to target a larger shark. This is not authorized at the Bronzie Festival for obvious reasons.

The 2012 Bronzie Festival had 120 registered anglers, a substantial increase from the mere 27 anglers who participated in 2010 the tournament. The purpose of SASC’s attendance at all competitions is to tag and gather angling data for as many caught and released sharks as possible. SASC RecFishSA recruited volunteers to form teams of experienced taggers and a limited number of inexperienced volunteers who wanted to gain shark tagging and handling experience.
Although this tournament primarily aims to target Bronze Whalers (Carcharhinus brachyurus), all elasmobranchs caught are tagged and the angling data mentioned in the December blog () is collected.
Of the 45 Bronze whalers caught and released on the day, the scientific team tagged and collected angling data for 37 of the sharks including one female Bronze whaler caught as bycatch by the nearby beach-seine fishermen and a Spotted Gully shark (Triakis megalopterus) caught unintentionally by a tournament participant.

The data collected on the day will be added to the RecFishSA database to identify the impacts of catch and release angling at a species level. The knowledge gained by this research will be used to inform managers and stakeholders of species-specific responses to angling stress and thereby offer ways to reduce the impacts of the fishery.
The SASC RecFishSA team are extremely grateful to the organizers, sponsors, anglers and volunteers who made this tournament a success. The eight sharks that were not tagged on the day were released before tagging as the scientific team allocated to the area was occupied with another shark at the time. 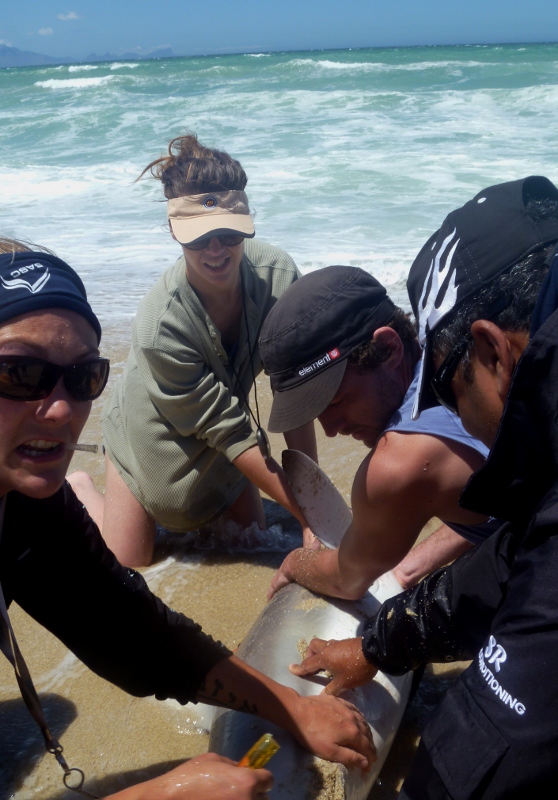 The RecFishSA team working quickly to tag and gather data