In October the South African Shark Conservancy’s (SASC) RecFishSA team attended a Western Province Angling competition on the West Coast, South Africa.
Approximately 200 rock and surf club anglers fished to accumulate points for their personal and club scorecards. SASC attended the competition to tag as well as collect angling information such as hook type, hook location, fight time, and time out of water. This angling data is collected to better understand species-specific post-release mortality from recreational catch and release fishing will be used to advise anglers on techniques and methods to mitigate the negative impacts of their sport.
The conditions were superb for a day on the beach but unfortunately catches were low. During the morning low tide the anglers and the RecFishSA team braved a tidally exposed rock formation to target and tag broadnose sevengill cowsharks (Notorynchus cepedianus). The team tagged two beautiful male cowsharks before the tide began to push and make the area unsafe. The team then moved to the beach and focused on tagging the skates, rays and guitarfish caught by the anglers. 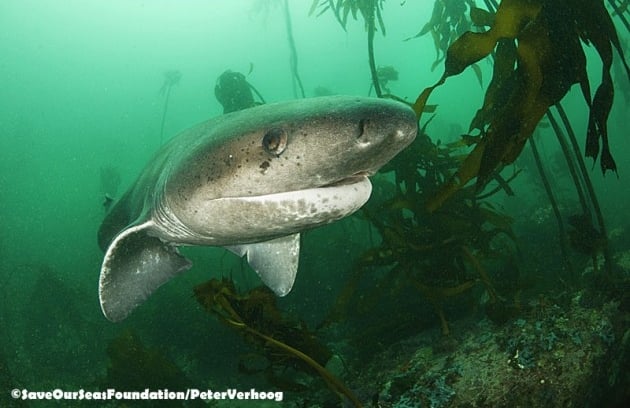 The broadnose sevengill cowshark (Notorhyncus cepedianus) is wide ranging in temperate waters. Although not heavily exploited in South Africa, they may be subject to fishing pressure to supplement low catches of other commercially targeted species.

The team tagged and collected data from six Bluntnose guitarfish (Rhinobatos blochii) between 70 and 90 cm total length. In the last ten minutes of fishing time an angler landed a 45cm Biscuit skate (Raja straelini). This is the most common species of skate in South African waters, is widely distributed and often taken as bycatch in the hake trawl fishery and sold as “skate wings” for human consumption. Reaching a maximum size of 49cm disc width this species is classified by the IUCN as of Least Concern in South Africa, but as Data Deficient throughout its global range. 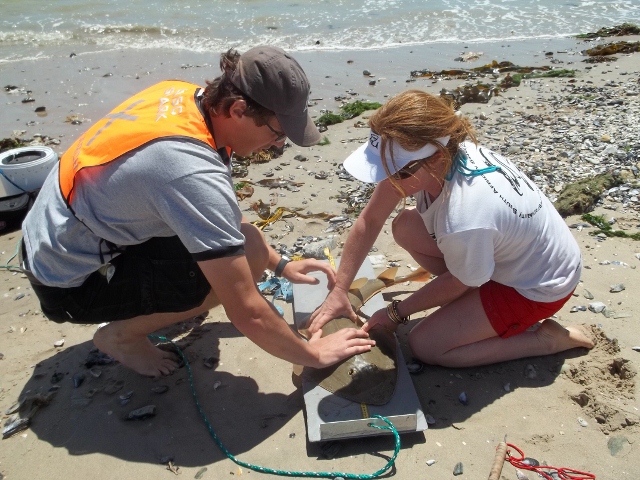 The team tag and collect fin clips, measurements and angling data for a Bluntnose guitarfish (Rhinobatos blochii). Bluntnose guitarfish are a relatively rare species whose distribution is recorded from Walvis Bay, Namibia to Cape Point, South Africa. This guitarfish reaches a maximum size of 96 cm total length and is endemic to its narrow distribution area. Although not reported as a large component of bycatch in the inshore commercial fishery, data may be inaccurate due to the species being misidentified as the similar Lesser guitarfish (Rhinobatos annulatus). The species is listed as Least Concern by the International Union for the Conservation of Nature (IUCN).

In the upcoming weeks, the team will be attending the Western Cape School League competition and delivering educational material to the Blaauberg Sea Scouts to teach ethical angling practices to the next generation of sport fishers. 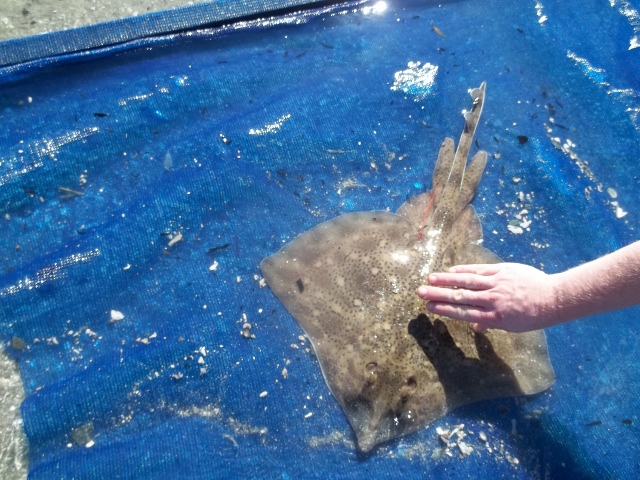 A Biscuit skate is tagged before being released from the stretcher.