The SASC RecFishSA team have been pretty busy over the past few months. This is prime angling time in the Western Province, and we have had a great time tagging and gathering angling data to contribute to the post-release mortality component of the project.

In South Africa recreational permit holders may catch and keep a cumulative bag limit of ten sharks, skates, rays or chimeras (Class Chondrichthyes). Spotted gully sharks (Triakis megaloptus), Ragged-tooth sharks (Carcharius taurus), Striped catsharks (Poroderma africanum) and Leopard catsharks (Poroderma pantherinum) have a bag limit of only one. Caught and released sharks are not considered as a component of the bag limit, and recreational anglers may catch and release as many sharks as they wish besides the following which are on the prohibited species list: Basking shark (Cetorhinus maximus), Great white sharks (Carcharadon carcharias) and Whale shark (Rhincodon typus).
RecFishSA works closely with organized club anglers who are not only extremely passionate about their sport, but care deeply about the well-being of the species they target and want to take measures to ensure the sharks, skates and rays they release have the best chance of survival. The likelihood of a caught and released shark surviving is dependent on the species’ physiological traits, metabolic reaction to angling stress and any physical injury from angling gear. To better understand how different species react to angling stress RecFishSA attend angling competitions and collect the following information during the tagging process:
1. Location: The area name. The angler may struggle to land the shark due to a sandbank or gully. This could extend the fight time (see number 12)
2. Species: The species of shark, skate or ray caught, tagged and released.
3. Tag number: The unique number on the spaghetti tag inserted into the sharks dorsal muscle. A recapture of this shark will indicate that the shark has survived angling stress as well as shed light on movement, growth and important seasonal areas and habitats.
4. Sex: Was it a male or female shark? This adds to information about seasonal areas and habitat use of the tagged sharks.
5. Measurements: This is useful information for growth studies, as well as a factor relating to how long it will take an angler to land a shark as a heavier shark will take longer to land.
6. The tagged sharks are injected with Oxytetracycline (OTC) an antibiotic used for age and growth validation in the event that an injected shark is caught and killed. For more information regarding the age validation process see:
7. Fin clip: A genetic sample is collected by snipping off a small piece of the trailing edge of the dorsal fin. Collected samples contribute to geneticists who investigate genetic structure and diversity of sharks in the region.
8. Hook size: What was the size of the hook which landed the shark? Smaller hooks can more result in the shark being gut hooked and may result in mortality.
9. Hook type: Was it a J or circle hook? Circle hooks tend to hook into the corner of the shark’s mouth rather than be swallowed.
10. Barbed or barbless hook: Barbless hooks cause less damage and are easier to remove from the shark. An angler can easily flatten the barbs on the hook to minimize injury.
11. Exposure: How long was the shark out of the water? This information can also be linked with hook type i.e. it may take longer to remove a barbed hook. The less time the shark spends on the beach, the quicker the recovery time will be. An exhausted or stressed shark may need to rest on the bottom to recover. A smaller shark lying on the bottom is an easy meal for a larger shark.
12. Fight time: How long did the angler fight the shark? The longer it takes to land the shark, the more time the shark spends fighting the line. Normal swimming activity is aerobic (uses oxygen to produce fuel for the muscle activity). During burst-type activity anaerobic glycolysis supports the white muscles. Muscle glycogen converts to lactic acid resulting in blood chemistry changes. High levels of acidosis are known to be lethal although certain levels of acidosis may be tolerable.
13. Angler name: RecFishSA collects the anglers name to report back on recaptures of tagged sharks, skates and rays. This information can also be used to determine the angler’s level of angling experience. Does a more experienced angler inflict more or less stress on the shark when practicing catch and release angling?
14. Release state: Did the shark swim away strongly (1), swam to shore (2) or required resuscitation (3).
15. Comments: This section is used to record any injuries or observations such as mating scars or gear injuries.

Preliminary tagging results:
• In the 2012 angling season RecFishSA tagged and collected angling data for eight species of shark, skate and ray comprising of 67 individuals.
• RecFishSA have tagged a total of 501 shark, skates and rays since December 2010.
• Three recaptures have been reported from sharks tagged by RecFishSA in 2011. Two of the sharks (Carcharhinus brachyurus) were caught and killed by commercial vessels. 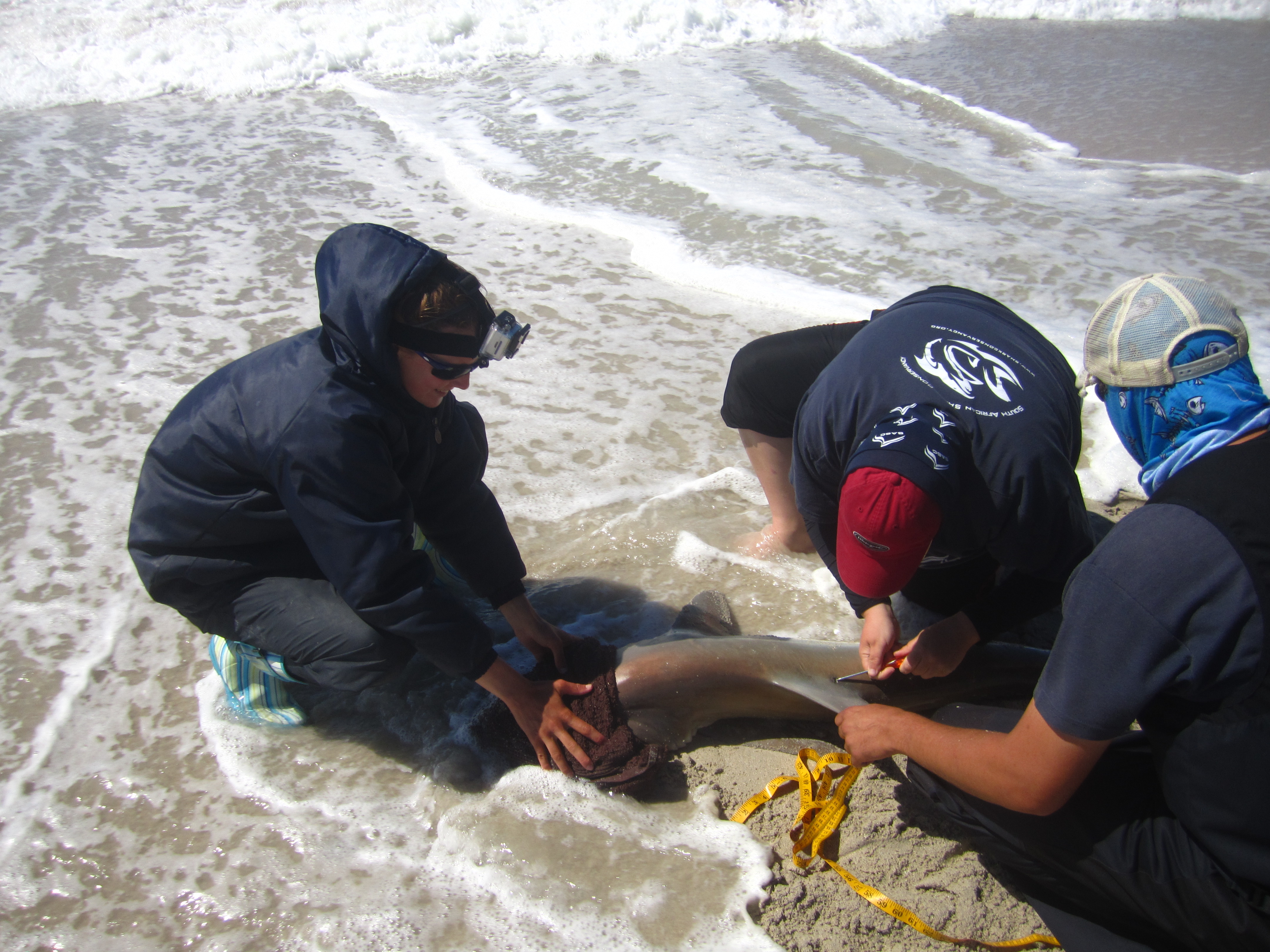