Sadly along with the South African summer the RecFishSA 2012 tagging season has come to an end.
By way of a little background for any new RecFishSA blog readers: In 2010 the South African Shark Conservancy (SASC) formed an affiliation with the South African Shore Angling Association (SASAA) to determine the impacts and importance of recreational elasmobranch angling in SA. The club anglers expressed concern over perceived declines in size class, catch rates and composition of their target species. The South African inshore commercial fishing industry (i.e. commercial handline, trawl and longline fisheries) target – or catch as bycatch – an identical suite of sharks, skates and rays as the recreational angling community. The recreational club anglers practice catch and release fishing for elasmobranchs to accrue points for personal and team scores. These anglers are not only passionate about their sport and the animals they target, they also contribute a significant amount to the South African economy. Bearing in mind the above-mentioned statements, consider the following:
1. Is catch and release fishing for elasmobranchs worth more to the South African economy than commercial shark fishing and is it therefore in the Department of Forestry and Fisheries (DAFF), interest to afford better protection/management measures to elasmobranchs to ensure a sustainable future for recreational catch and release fishing?
2. Do elasmobranchs survive the stress of catch and release angling?
3. How can anglers take measures to improve the survival rate of caught and released sharks?
To answer the above questions, the SASC RecFishSA project is dedicated to determining the following:
1. The species-specific stress response of caught and released sharks. This will be achieved by attendance at SASAA tournaments to tag and collect angling stress data pertinent sharks, skates and rays.
2. Deliver Responsible Angling Clinics (RAC) to educate anglers on best procedures to minimise stress in caught and released elasmobranchs through better gear selection and angler behaviour. The RAC includes information on how to join the Ocean Research Institute (ORI) and participate in the national marine tagging programme, best practises for relevant tagging data collection, confusing species identification, basic elasmobranch ecology and biology and the aims and objectives of the SASC RecFishSA programme;
3. Determine the economical importance of recreational catch and release elasmobranch fishing in South Africa through a survey;
Secondary objectives include the following:
1. What is the species overlap between inshore commercial and recreational anglers?
2. How have species composition, size classes and catch per unit effort rates of club anglers changed in the past decade?
The SASC RecFishSA project received funding from the Save Our Seas Foundation in May 2012. Although SASC began attending SASAA competitions in 2010, in 2012 the RecFishSA team began collecting angling data to compliment the tagging database. To date a total of 18 species have been fitted with spaghetti tags and angling data has been collected for 15 species (Figure 1). Ten angling tournaments have been attended since May 2012 and a total of 187 individuals were tagged this season. As indicated in Figure 1, the species caught, tagged and released all overlap with at least one inshore commercial fishing industry. Many are listed by the IUCN Red List as Data Deficient, Near Threatened and Vulnerable.
Recaptures:
There have been six recaptures recorded this past season. Sadly two of the recaptures – Bronze whalers (Carcharhinus brachyurus) – were caught and retained by commercial fishers. A third C. brachyurus was recaptured and safely released by an ORI registered angler, Mr Kabous Vryenhoek. The female shark had been tagged by SASC at the SASAA 2012 Development Nationals at an area known as Die Mond in Struisbaai (Western Cape, South Africa) and recaptured 319 days later at the same location. Her precaudal length at first capture was 865 mm and when she was recaptured she measured 920mm – a total growth of 550 mm of growth in less than one year. Unfortunately these sharks were tagged prior to the advent of angling data collection.
Two caught, tagged and released Lesser guitarfish/sandsharks (Acroteriobatis annulatus) were recaptured in February 2012. Exciting news for the RecFishSA post-release mortality study, all angling data had been collected for the sharks. Both sharks were tagged on the same day at the SASAA 2013 Ladies Nationals tournament. Both were hooked in the mouth with a barbed hook – one was a J hook and the other a circle hook – and both were out of the water for less than two minutes. They were recaptured within days of first release in the same area. A third Lesser guitarfish was recaptured exactly a year after first capture in the same location. The female shark measuring 890 mm total length was tagged on March 7th 2012 at the 2012 SASAA Development Nationals and had grown 50mm when she was recaptured at the 2013 SASAA Development Nationals. Unfortunately this is another shark tagged prior to angling data collection.
It has been a great angling season for the SASC RecFishSA crew. The winter ahead will be spent rolling out the economic survey, continuing with the Responsible Angling Clinic as well as analyzing historical SASAA catch records and quantifying the species overlap between the recreational and commercial fishing industries.
I would like to take this opportunity to graciously thank the South African Shore Angling Association anglers, specifically (although I would love to name you all I would have to dedicate another blog to this alone) SASAA President Pierre Du Preez, SASAA Secretary Frans Claasen and Western Province Shore Angling Association Environmental Officer Zane Merton. Thank you all for making the RecFishSA team part of the family, we have had an amazing time with amazing people and amazing sharks, skates and rays. 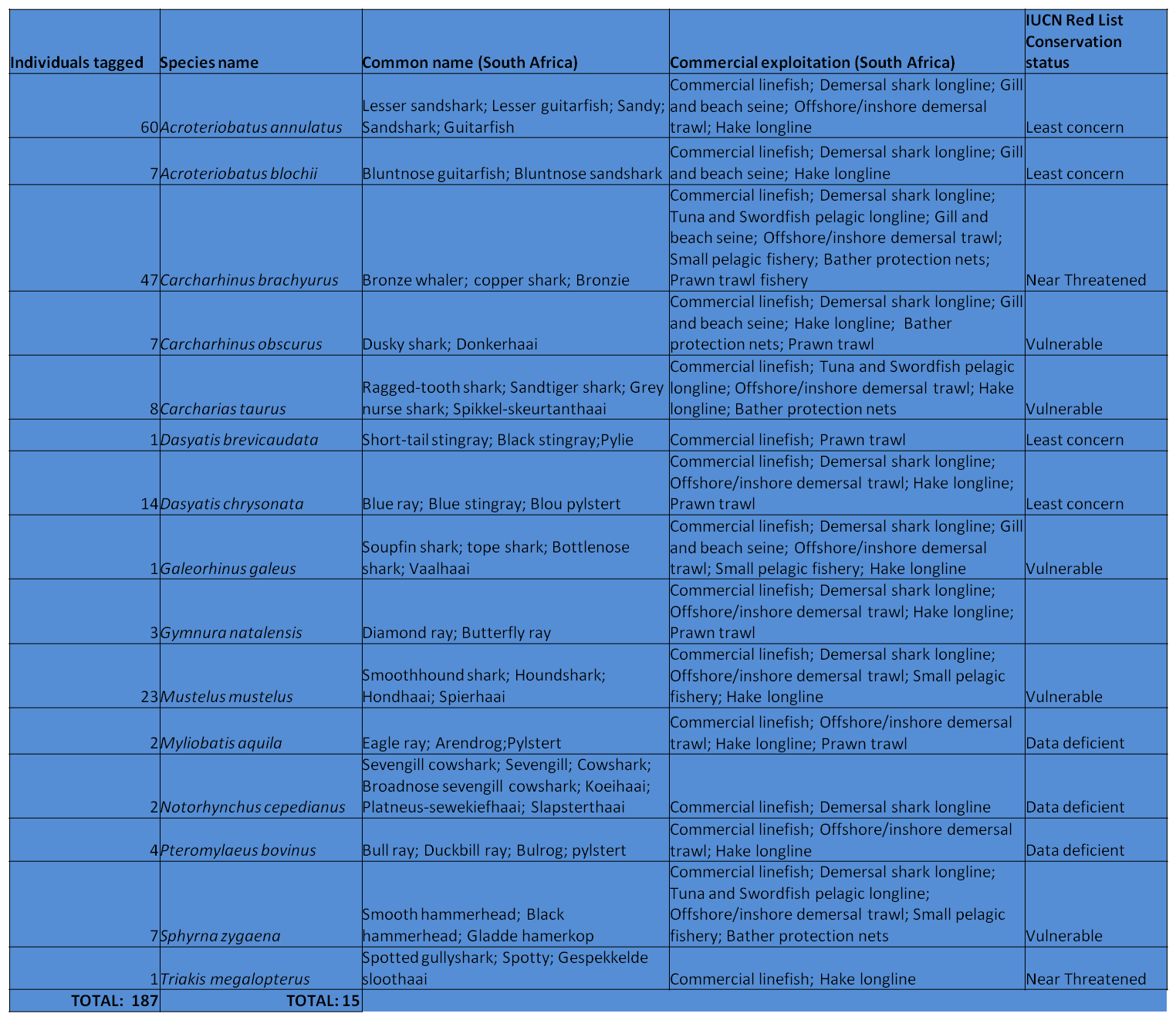