Sawfish are the stuff of legends: Animals that can grow up to 7 m long and have an extended rostrum (the ‘saw’) loaded with teeth. Old newspaper articles have described them as monsters that lurk in our rivers and oceans and are just waiting to attack people. Quite the opposite is true, as sawfish use their ‘saw’ skillfully in order to stun and manipulate their fishy prey, not caring for us humans. They are magnificent animals, no doubt.

Anecdotal reports claim that sawfish used to be so plentiful that people in Sudan once used their rostra as fence posts. Additionally, a study from Lake Nicaragua estimated that between 1970 and 1975 around 60 000 – 100 000 animals were caught in the lake by commercial fishers. This was once thought to be their largest population. A survey in 1992 could not find traces of a single individual in the lake. 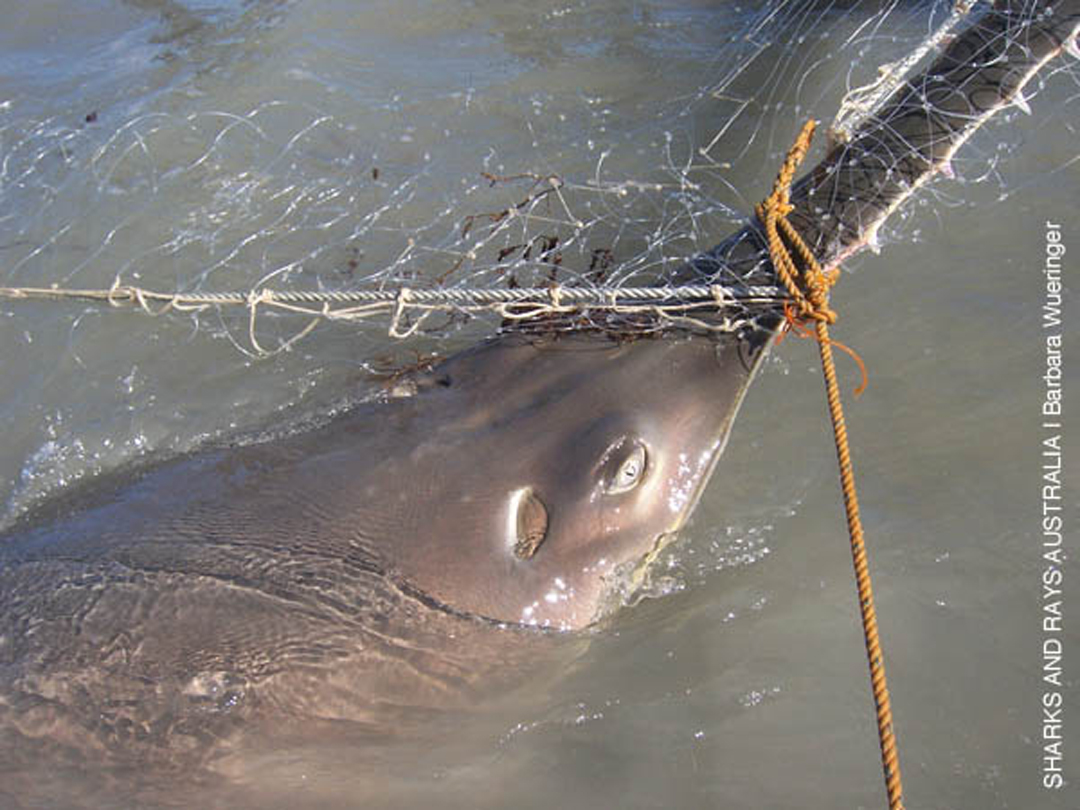 a green sawfish is caught in a gill net. Photo © Barbara Wueringer | SARA

Today, five extant species are recognized. All are either listed as Critically Endangered or Endangered under the criteria of the IUCN, making sawfishes the most endangered of all the sharks and rays in the world. Four out of those five species can be found in Queensland waters, which are thought to be home to some of their last important populations in the world. With significant global declines for all species, the question arises, if the rivers and coastlines of Queensland are still a stronghold for these animals?

First, we need to engage in a debate about our baseline – how abundant was the species in the past? This search can turn philosophical really quickly. How do we determine a healthy population? What levels do we want the population to return to? Does it need to return to pre-human influence levels or is it enough to keep the population at a level where it can somewhat perform its ecological function? Or is exploitation more important than conservation?

Secondly, we need to determine how much the population of sawfish have declined in Queensland. To answer this, sawfish capture data from the Queensland Shark Control Program (QSCP) was analysed. This program started in 1962 and aims to protect swimmers/surfers from potentially dangerous sharks by utilizing gillnets and baited drum lines. Although no scientific evidence exists that the program actually works, it has been in place for decades. 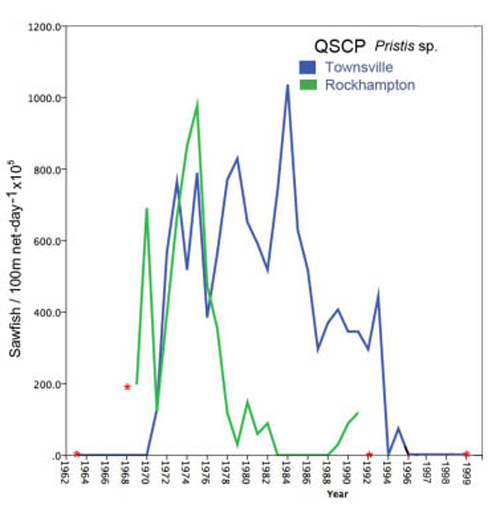 The data shows that between 1962 and 2016, 1450 sawfish were captured,with 99% of captures occurring in the four most northern areas of Queensland’s East Coast, suggesting the existence of critical habitat. Most animals were caught in the nets and not on drum lines.

An overall decreasing trend in catch rates was observed for two locations where standardized catches could be calculated. However, standardized catch rates from the data set are likely underestimating abundances, as the nets were set up to 500m away from the coast, in deep waters where they often did not reach the bottom. Most sawfish captures occurred near the bottom of the nets.

The facts of this data set make firm conclusions on abundance declines difficult, although it is apparent that the declines have been statistically significant. We need to devote more resources to better understand population trends in Queensland’s sawfishes.

You can access the publication on sawfish catches in the Queensland Shark Control Program here.