The knowledge handled by artisanal fishers has been acquired throughout generations and allows some traditional techniques to persist over time and become part of the subsistence of coastal communities. Guitarfish fisheries are a clear example of how the transmission of knowledge from parents to children and between relatives and other fishers has made the preservation of traditional techniques such as the “rajado” possible. This technique consists of making a special cutting of the guitarfish to achieve the correct form for drying under the intense sun. 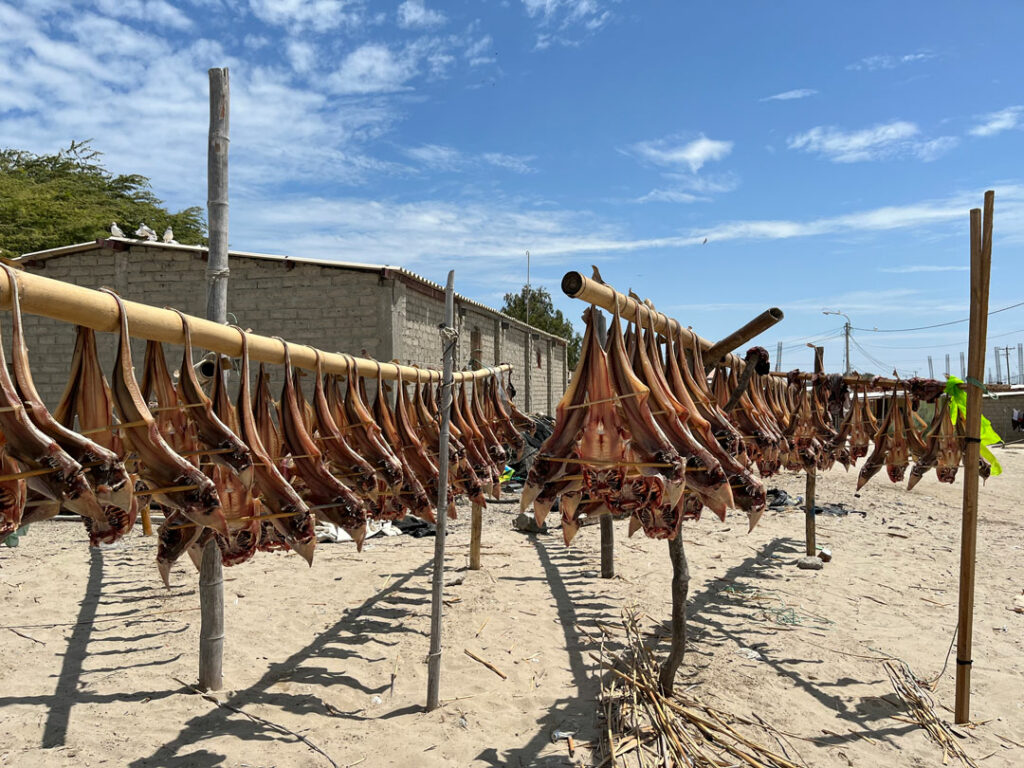 Guitarfish drying in the open air under the intense sun of the Port of Constante, in the Sechura Bay, the northern coast of Peru. Photo © Elizabeth Gutiérrez

The guitarfish is a species of flattened triangular appearance which inhabits shallow waters near the coast. It is the fourth species of ray with the highest volumes of landings in Peru (1997-2015), mainly developing its captured with bottom gillnets during summer. Its fishery represents an important local economy for some coastal fishing communities, providing added value to the resource, such as the artisanal drying technique, which allows these communities to survive over time.

The guitarfish is a resource fished and consumed by ancient Peruvians since pre-hispanic Peru; thus, the first records of its consumption date back to at least 1,800 B.C., on the northern coast of Peru. Its consumption persists today as it is the main ingredient for preparing various traditional dishes, the most notable being the renowned “Chinguirito”, a dried guitarfish “ceviche”, a historical dish that is part of Peruvian gastronomy. The characteristic of this typical dish is that it is prepared with dehydrated and frayed guitarfish meat. 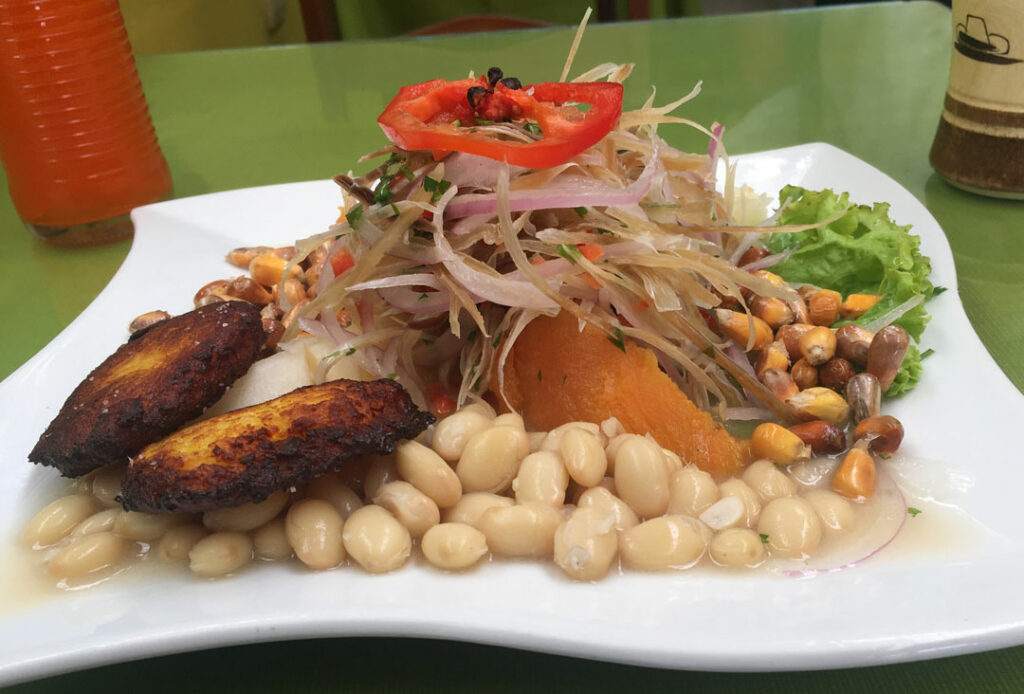 The typical dish "Chinguirito" is made of dried guitarfish meat, beans, and sweet potato, offered in a typical restaurant in San José, Lambayeque. Photo © Elizabeth Gutiérrez

A family legacy: from father to son

One of the predominant components of the guitarfish fishery is that it is a local and familial activity. It is very common to see up to two generations (father and son) onboard artisanal boats, working in the fishing operations, transmitting knowledge of how to fish in the sea and filet the guitarfish on land. One of these stories is about the Villalobos family; I met Mr Moises in San Andres city, an elderly father who ceded his spot as fishing skipper to his son Juan. Now Juan leads the boat and recounts how his father taught him how to fish when he was very young. 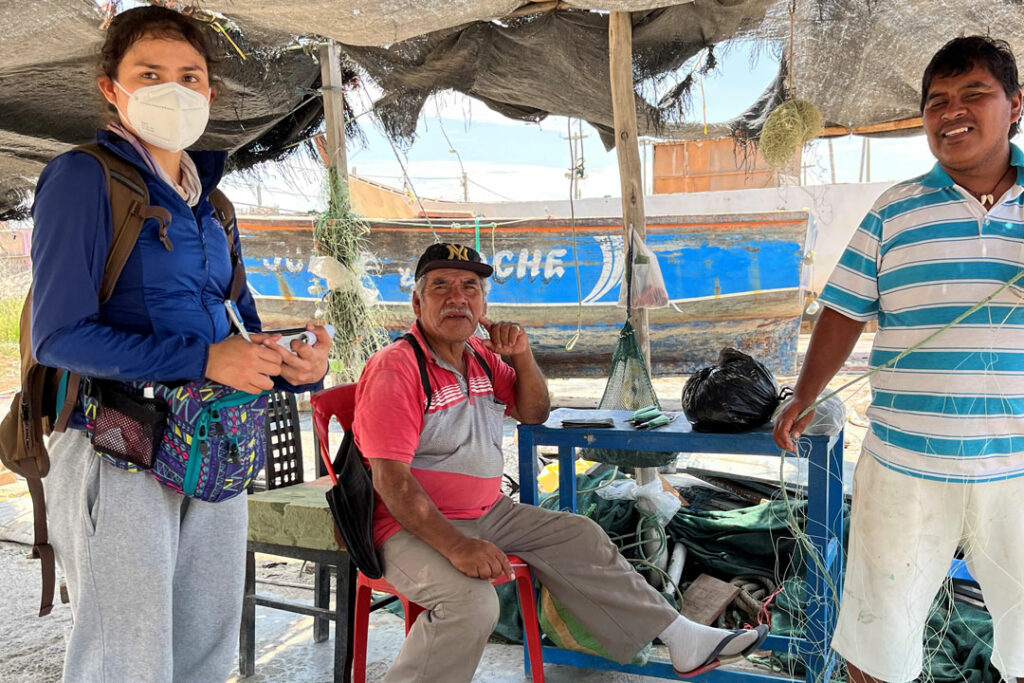 Juan Villalobos points out that he saw his father navigate through adverse waters on multiple occasions. However, his knowledge and ability allowed them to return home safely. Now, Juan directs the fishing operations, and his father supports him with tacking off the nets. Mr Moisés is reluctant to leave the sea; according to him, “his desire to embark and be on board at sea is what keeps him alive”.

In the guitarfish fishing activity, the familial component is also present along the chain of fishing, landing, fileting, and selling at local markets. The younger children and grandchildren support by washing and cleaning the guitarfishes, and the wives are in charge of drying the specimens in the sun. Thus, each member of the nuclear family fulfils a specific function in the chain of extraction, processing, and marketing of the guitarfish. 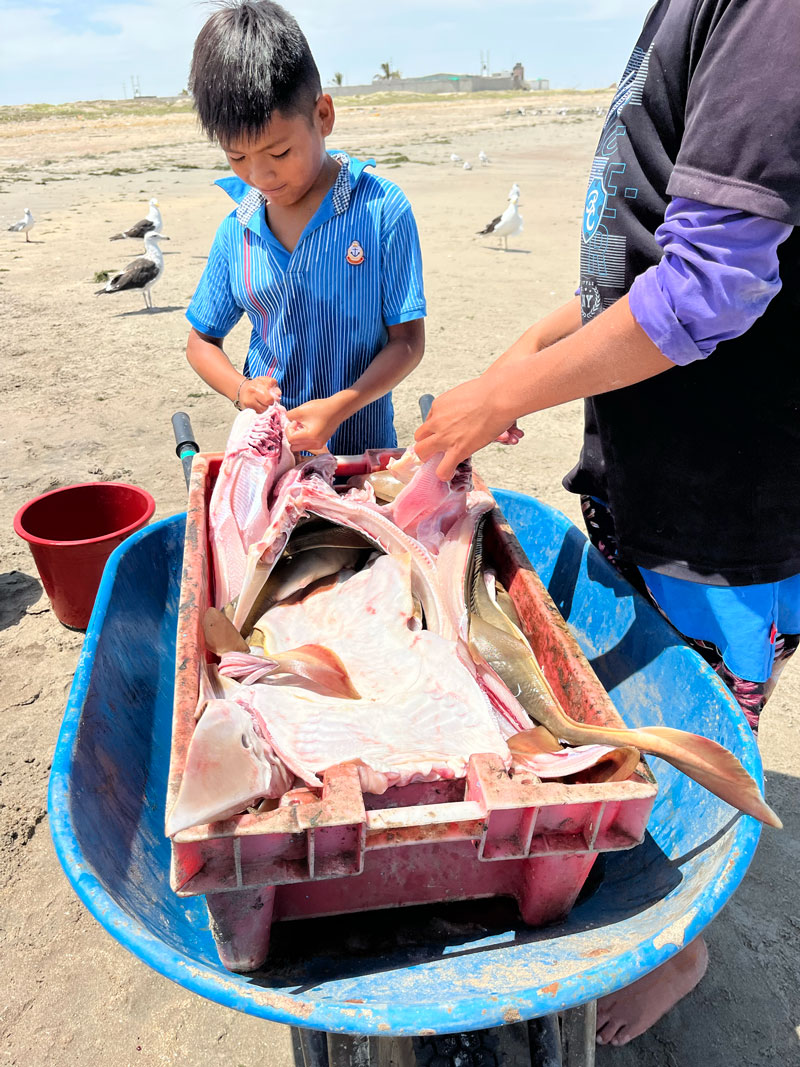 Sons of a guitarfish fisher finish washing the fish in the Port of Constante, in the Sechura Bay, on the northern coast of Peru. Photo © Eloy Aroni.

A shared legacy: the art of guitarfish “rajado”

The process of drying fish has been used since ancient times as a method of preserving food. Knowing the technique of “rajado” is essential to achieving the artisanal drying of the guitarfish, which consists of making a precise cut so that each specimen achieves a homogeneous drying under the sun. 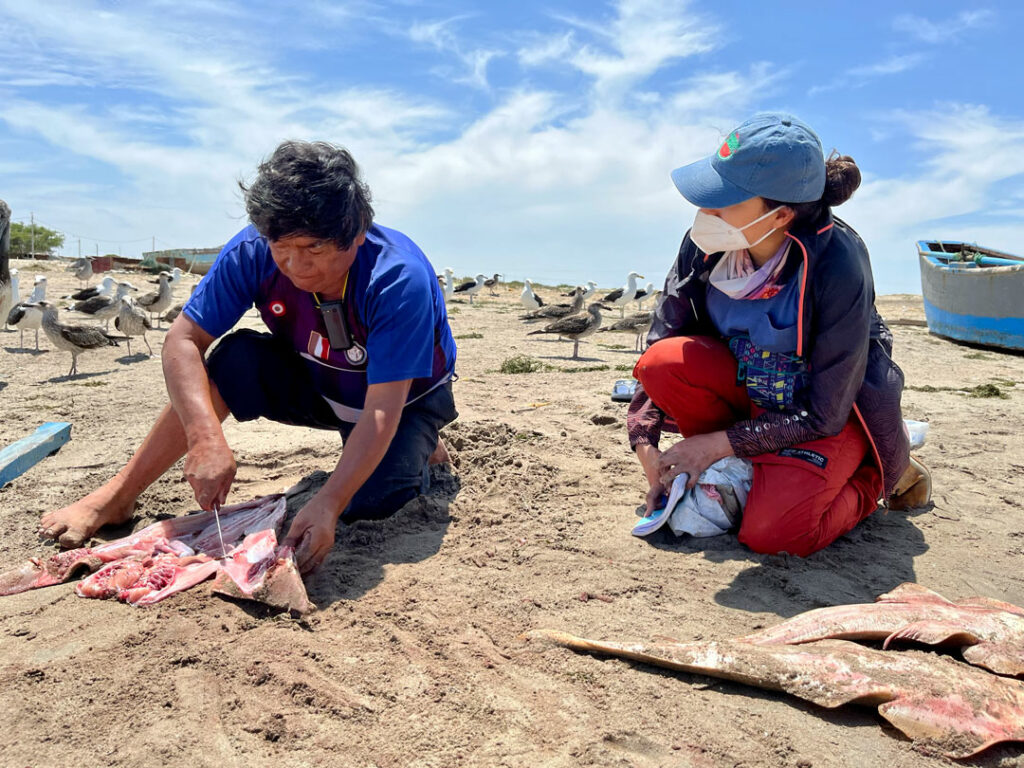 Retired fisher “rajando” a guitarfish in the Port of Constante, in the Sechura Bay, the northern coast of Peru. Photo Eloy Aroni

Early in the morning, the fishers arrive at the beach, ready to embark until the next day. On their faces, you can see the uncertainty and the hope of getting a good catch that will allow them to recover the fuel cost and obtain an income for their family. After a fishing trip of around 24 hours, the barges approach the beach to land their catch. One of them tells me with a smile, “today we got some guitarfishes. We were lucky”. The fisher places his catch on the sand, sharpens his knife and begins to filet the guitarfish; he holds it by the back and begins to cut laterally. Then come the children, the grandchildren and children of the fisher. They are in charge of guitarfish cleaning, which they achieve by hitting them against the waves. Finally, placed in crates, the guitarfish are taken to their homes, where the mothers prepare space in their yards where one by one, they are hooked on a horizontal pole to dry in the sun; everyone waits and provides care day after day until they are ready for sale. 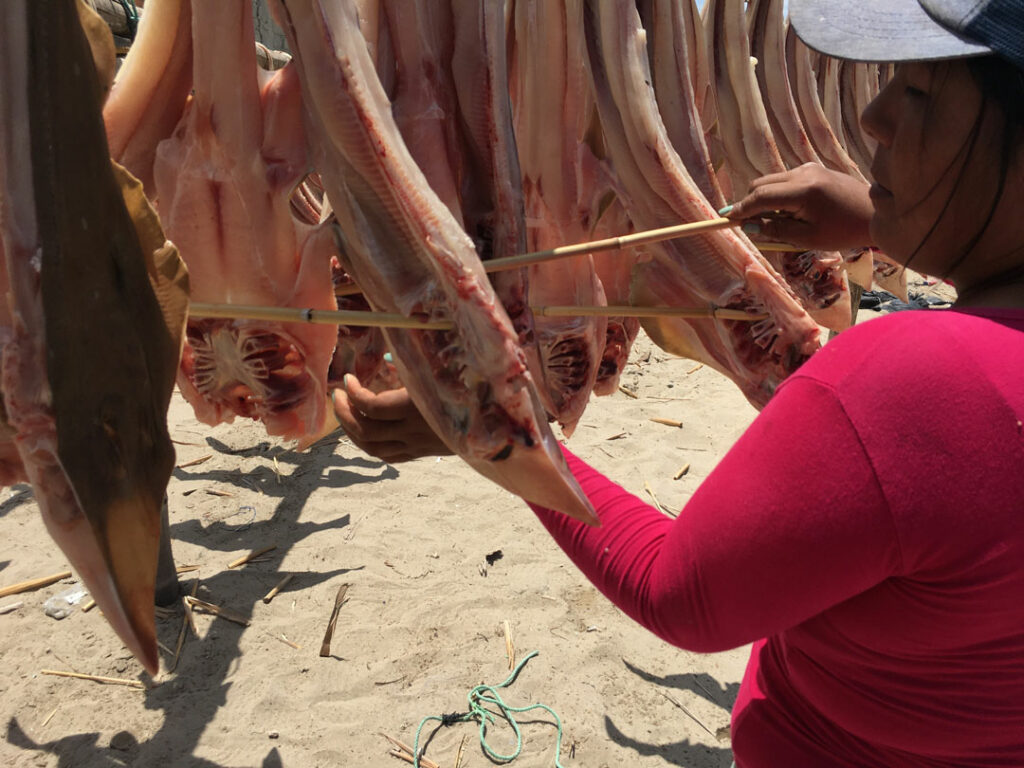 Cynthia is in charge of preparing the guitarfish drying in the Port of Constante, in the Sechura Bay, the northern coast of Peru. Photo © Elizabeth Gutiérrez

The “rajado” technique still survives in some coastal fishing communities in northern Peru, including Cancas, Port of Constante, and Playa Blanca along Tumbes and Piura, where older fishers keep this traditional technique alive. They pass their knowledge through generations. Thanks to this, today, some younger fishers increase their revenue by drying the guitarfish and selling them directly to the local public. This is the case for Nicolás Coronado, an artisanal guitarfish fisher from Playa Blanca (Piura). Who mentions that thanks to Mr Lázaro, an elder guitarfish fisher from Port of Constante, he learned the “rajado” technique of slicing guitarfishes. Now, he has stopped selling fresh guitarfishes, instead opting to sell them dried to locals obtaining better revenue.

This project aims to understand the different stages of guitarfish, from their extraction to when they are sold. Thanks to the Small Grant from the Save our Seas Foundation, we will continue working on research, conservation, and education around the guitarfish fishery. We believe this work will help us learn more about the importance of this local fishery on the coasts of Peru.

Elizabeth Gutiérrez is a research associate at the Coastal Areas and Marine Resources Organization – ACOREMA.

Project
Assessment of catch and bycatch of guitarfishes in Peruvian waters

Elizabeth is visiting the ports and fish landing sites of twelve ports in Peru. She records and collects samples as the fishers unload their catches, searching for guitarfishes. Elizabeth is keen to work with the natural curiosity of the fishers who want to know more about her work and use these interactions to get more information and involve fishers in this research. This way, her project can provide an understanding of how and where guitarfishes are being caught along the Peruvian coast.