When it comes to personality studies in sharks, the bigger the sample size, the better. In the third issue of Save Our Seas magazine, you might have read about how we study personality in juvenile lemon sharks at the Bimini Biological Field Station (also known as the Shark Lab). Now let me tell you about the PIT project, which catches enough sharks for us to conduct rigorous personality studies.

Mention the PIT project to a Shark Lab alumnus and you’ll probably hear words like crazy, exhausting, hilarious and miserable. The project is all of that! It involves capturing, in gill nets and at night, the entire population of juvenile lemon sharks of two nurseries in Bimini, measuring each shark and tagging it with a PIT (Passive Integrated Transmitter). By numbers, the PIT project is: three gill nets, four teams, 12 nights, hundreds of sharks and millions of mosquitoes. It’s been carried out each year since 1995 and has provided the Shark Lab with some major findings, such as the first evidence of female sharks returning to their place of birth.

PIT 2015 was my first round. So what goes through the head of a first-timer? In the weeks leading up to the first PIT night, the excitement builds slowly but surely – just like the pens that will hold all the captured sharks. Seasoned Shark Labbers tell their stories (sometimes funny, sometimes scary) to the newbies. All the equipment is checked, double-checked and checked again by anxious staff members. The closest grocery store is raided by dozens of interns worried about grumbling stomachs during the long nights. 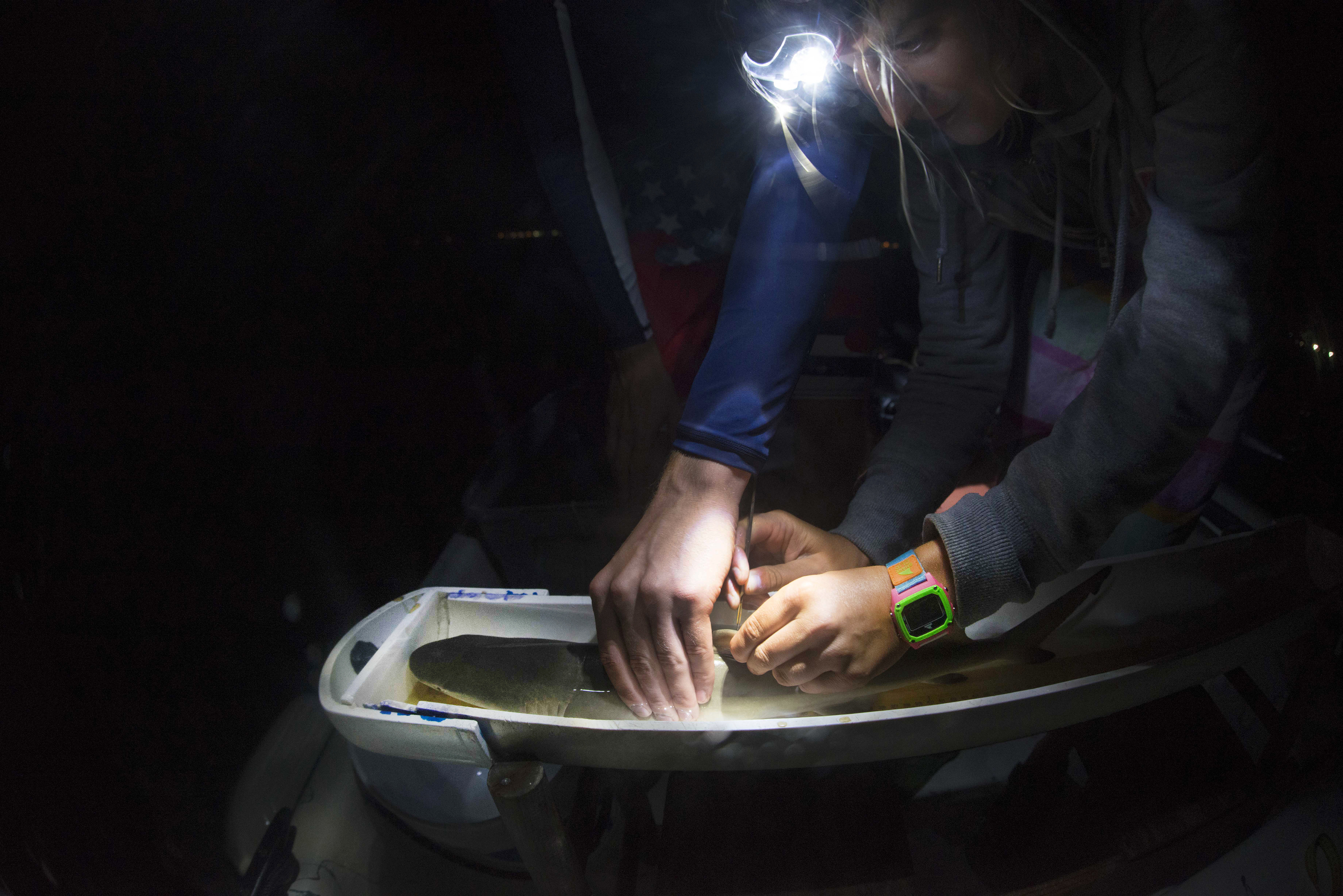 Then one day, finally, it’s time to go! The first set is done in a deliriously happy mood, teams betting on whose net will be the most successful (and whose will catch a smalltooth sawfish). Suddenly the first shark is captured, to resounding exclamations that can be heard in Miami. After a very busy first night, 15 wet-to-the-bones interns come home ecstatic about their adventure. But during the following nights grumpiness gradually replaces excitement. You need to be very positive to avoid being affected by the long, dark, cold hours, watching the number of sharks caught decrease each night, and the constant buzzing of bugs around you. Fortunately, the Shark Lab is a great group of friends. Every night hilarious games are played over the radio to keep everyone entertained and the home-crew dresses up to bring a delicious dinner that will warm hearts and bodies in the middle of the night.

After six long nights of fishing in one nursery, it is time for the PIT warriors to get a rest. A rest? Not really! All the nets need to be repaired, the equipment must be rechecked and everybody has to get ready for another six nights. The nights in the second nursery are similar to the previous ones, with the first being much busier than the rest. But this time everyone is ready, sleeping strategies are well established and all the crew are mentally prepared for the task ahead. 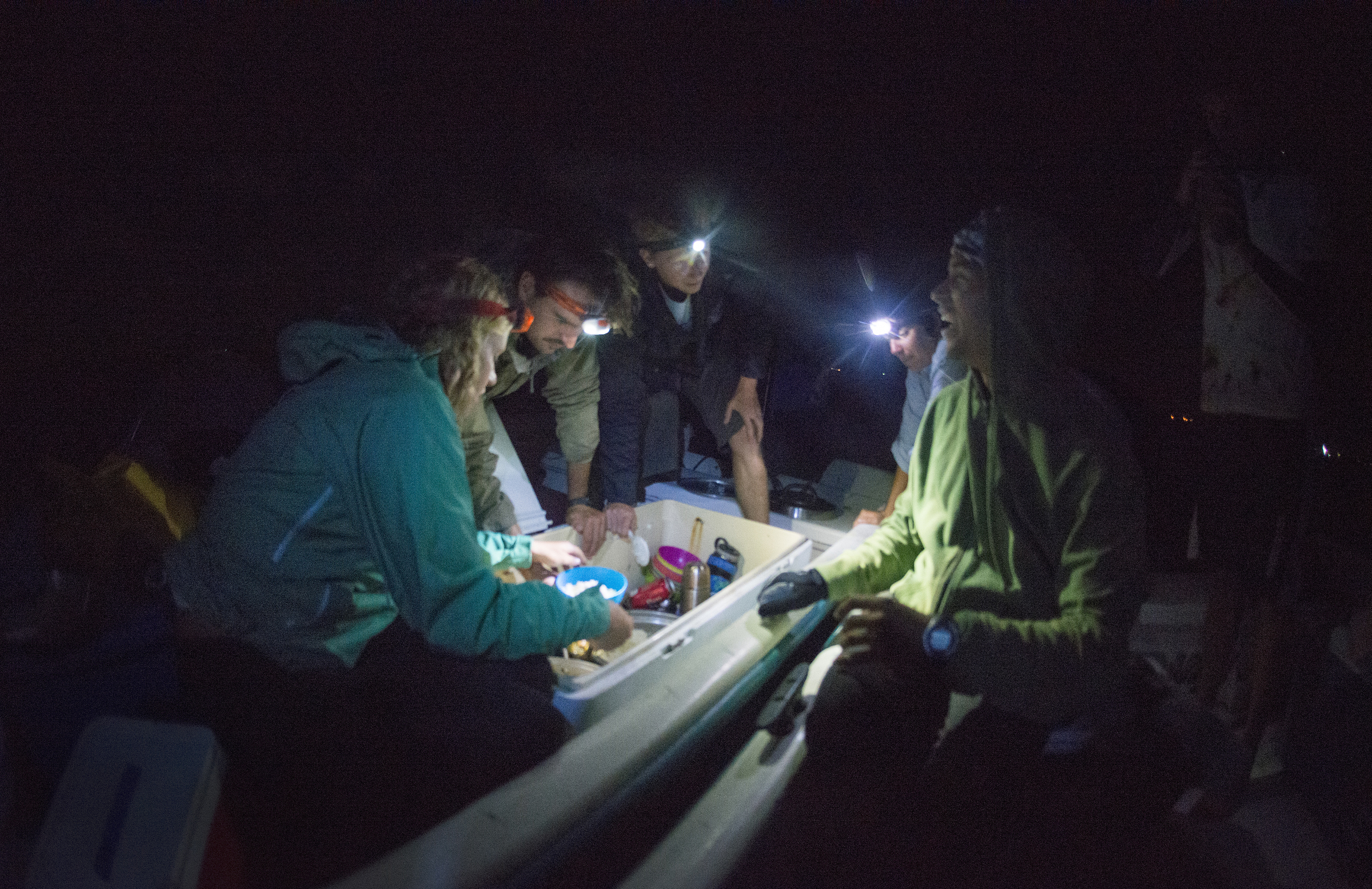 In 2015 we tagged a total of 196 sharks, more than half of which were captured during the first night in each nursery. PIT 2015 involved 22 people, who finished the adventure exhausted but incredibly proud and excited. Did I tell you that sample size is important in personality studies? Well, during PIT 2015 60 sharks were tested for sociability and exploration, and a subset of 36 were tested for neophilia and boldness as well, providing me with a huge amount of data. So far, thanks to the PIT project, more than 250 sharks have been tested for personality traits. At the Shark Lab, this is how we roll!