The coastal waters of Tanzania provide distinctive habitats for sharks, rays and other marine fishes which contribute to the communities’ livelihood. However, the populations of sharks and rays are declining due to unsustainable fishing activities. In Tanzania especially in the Mafia archipelago, sharks and rays are commonly targeted and incidentally caught in gill nets and long lines. These Chondrichthyes form one of the Mafia prestigious marine species which help to fuel local economies through fresh, salty and sunny dried fillets. Domestic markets including Mwarusembe local fish market in Mkuranga District are fueling the salted and dried ray fillets business leading to vast numbers of fishermen increasingly targeting rays. However, extreme poverty along the coastal areas and lack of community awareness leaves little incentive for sustainable management of rays. Overexploitation through targeted as well as incidental catch, catch of small-sized rays in gillnets and long lines, and habitat destruction are threatening the survival of rays’ population in Mafia. To diminish this trend requires community awareness and education program as well as building capacity of the government and community institutions to rationally manage rays and other Chondrichthyes.

This project was then concluded by conducting education to different students on the importance of biology and conservation of sharks and rays. Students were visited at their respective schools or colleges and asked various questions relating to ray fishes biology and conservation. For university students who answered the questions well were invited to attend a presentation conducted at Tanzania Fisheries Research Institute (TAFIRI) HQs. The primary school students were also asked questions and various gifts such as exercise books, mathematical sets, science books for primary schools and watches, were awarded to the winners. 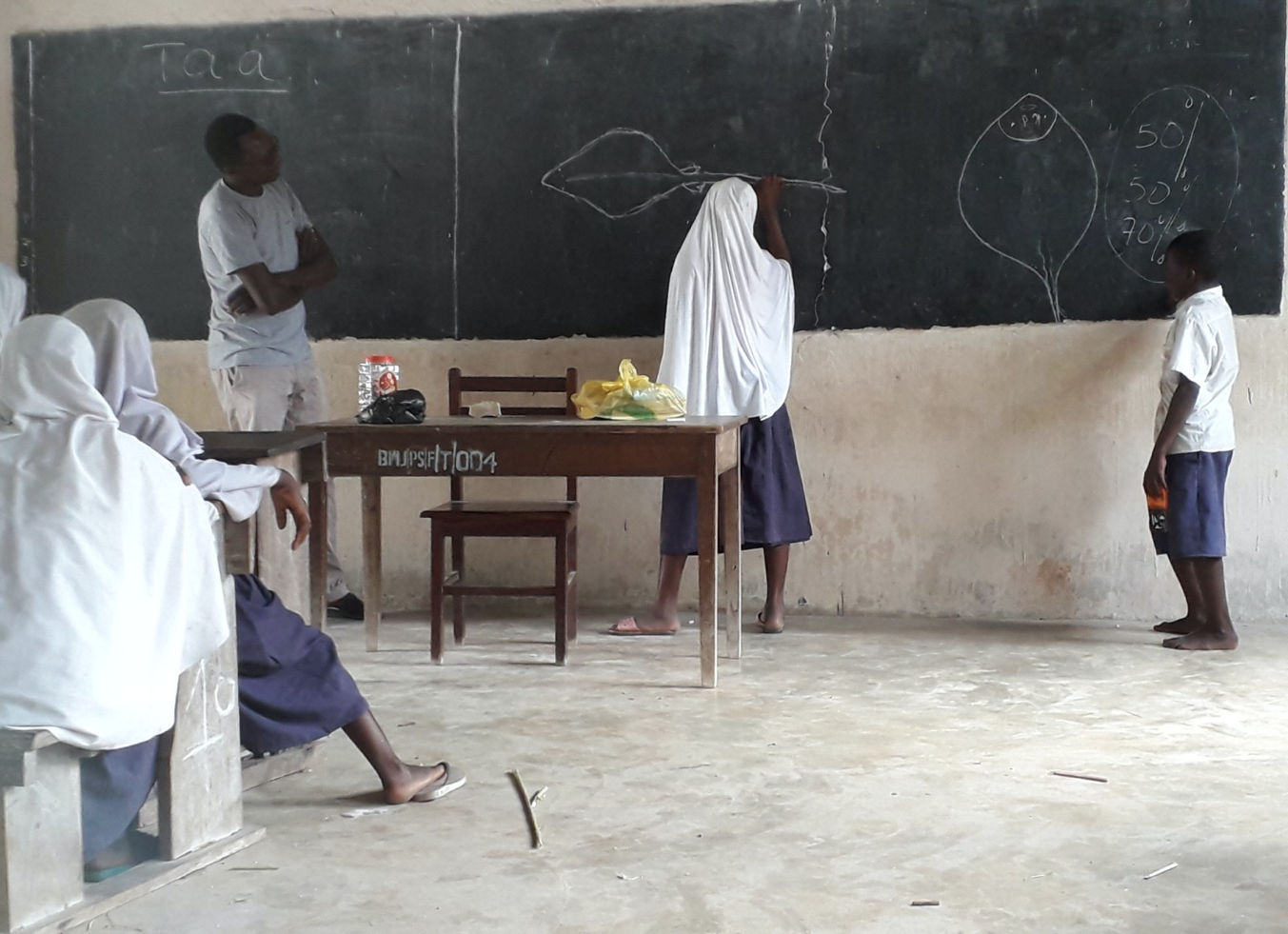 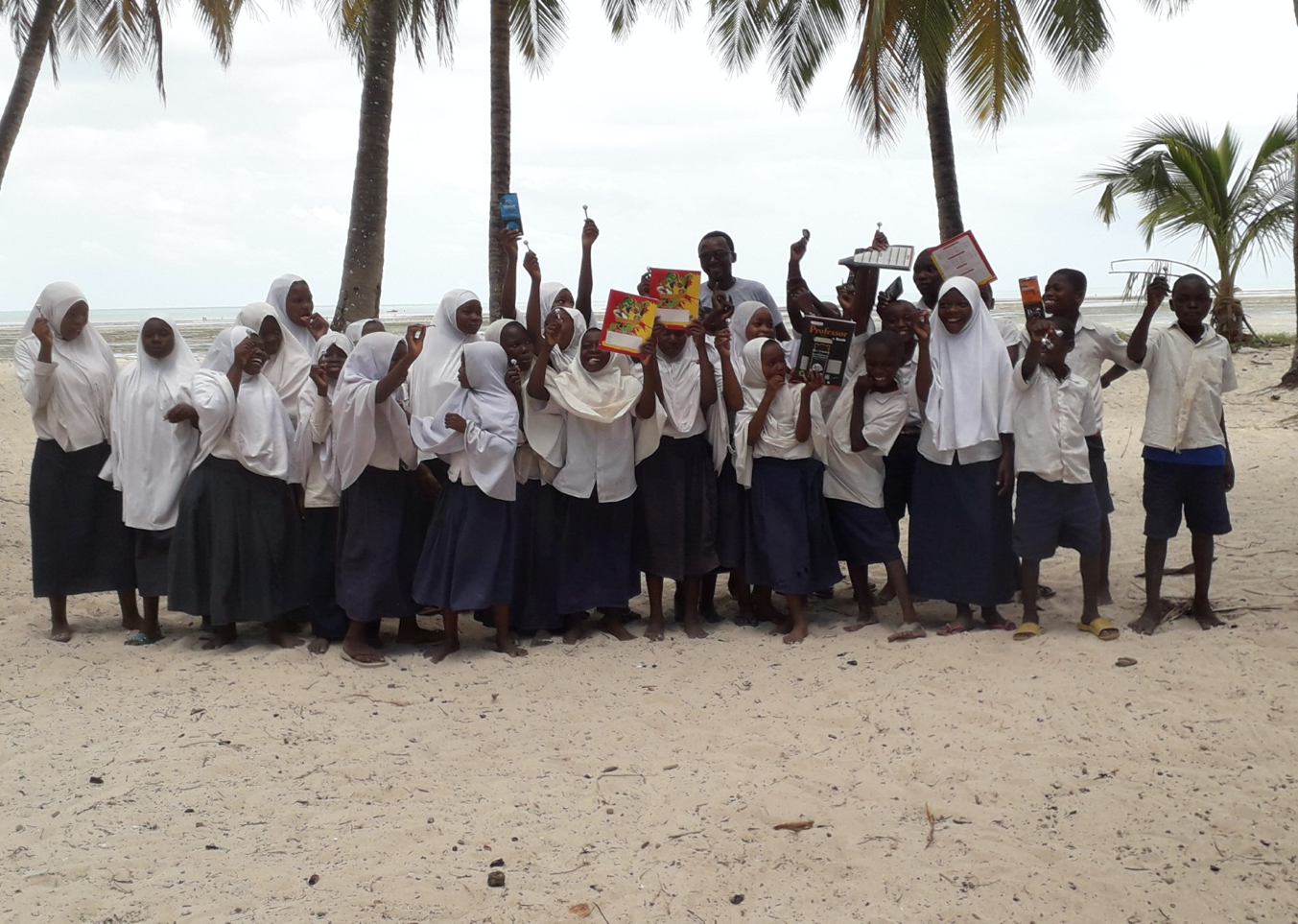 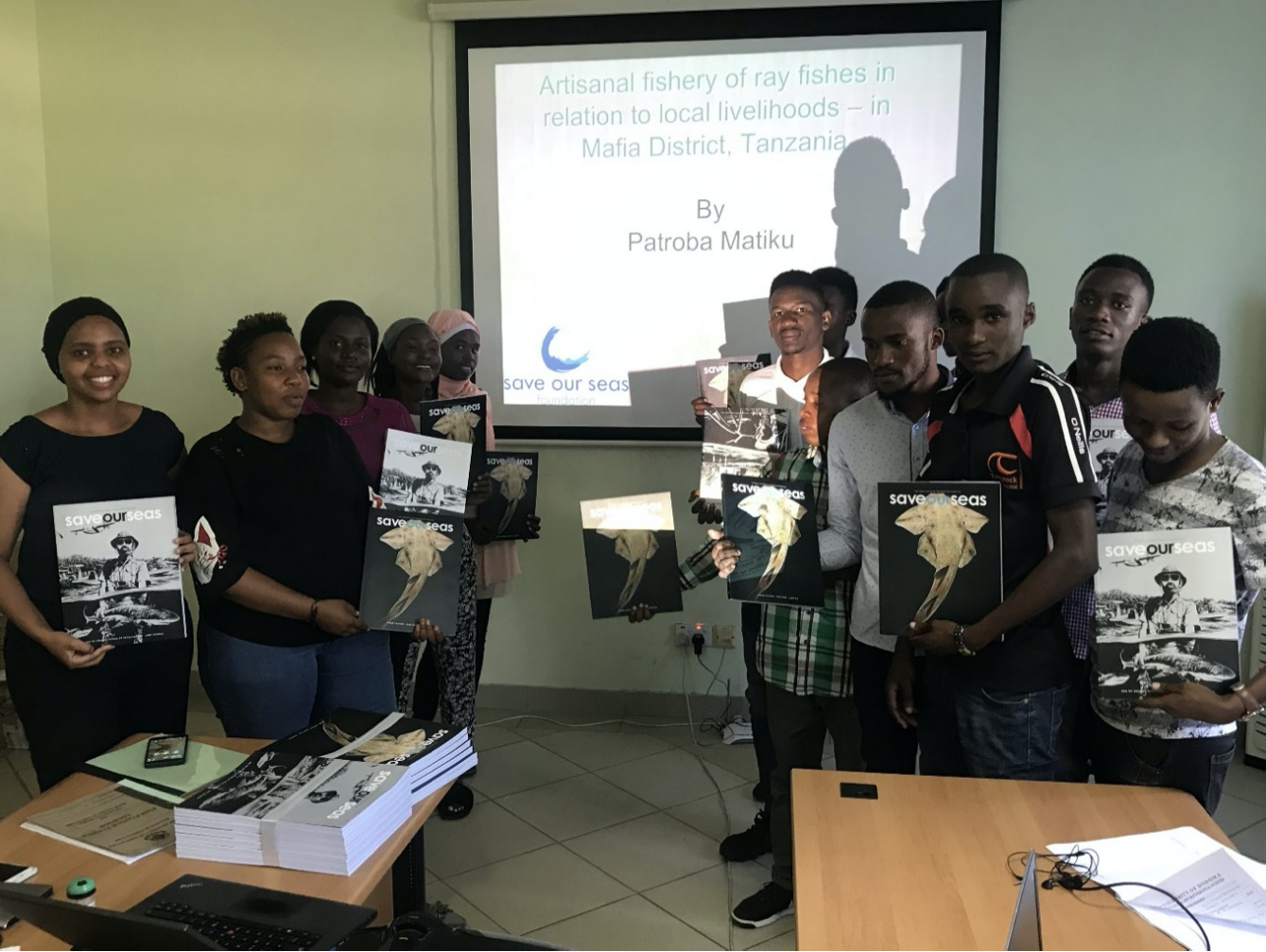 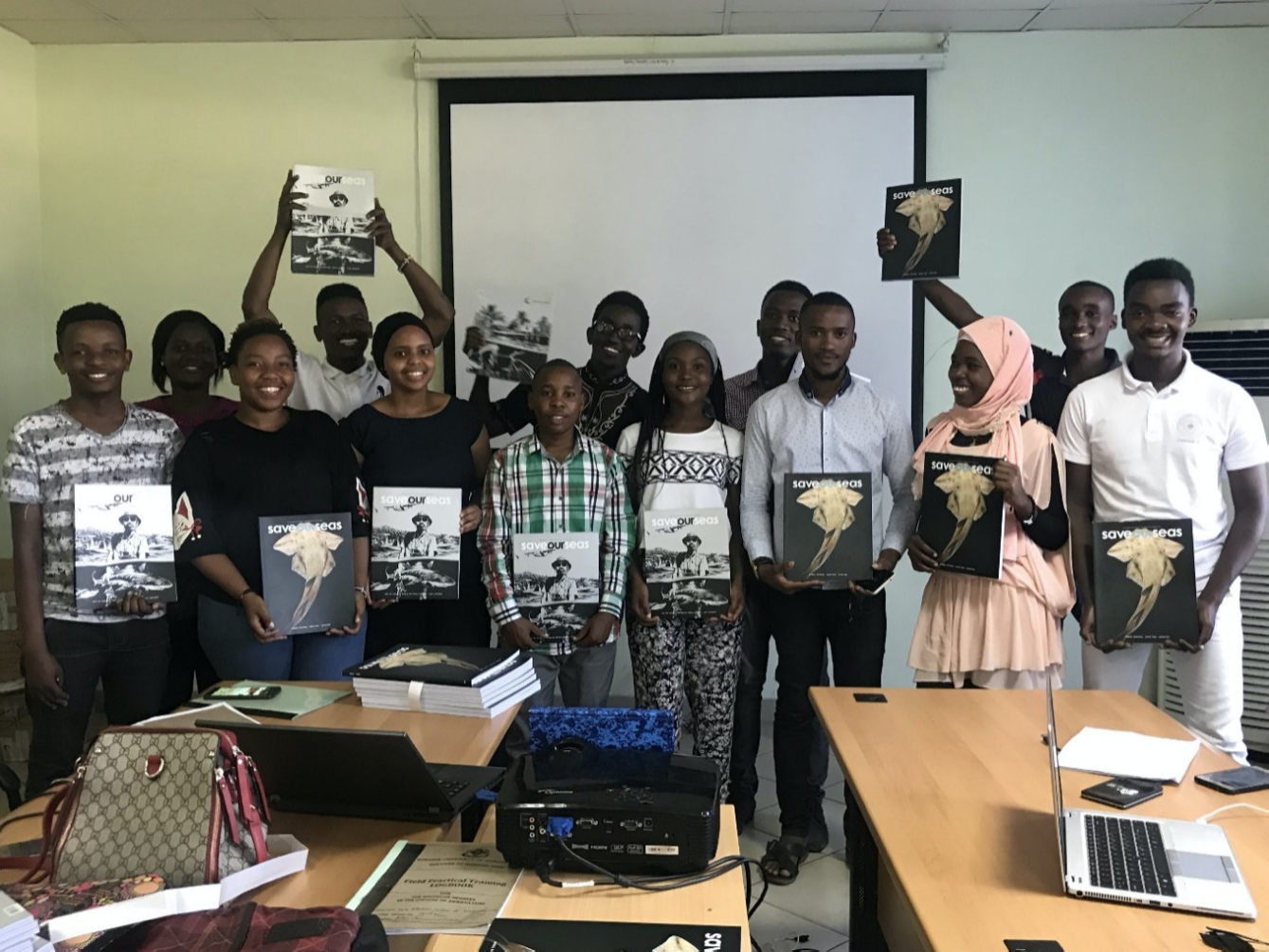 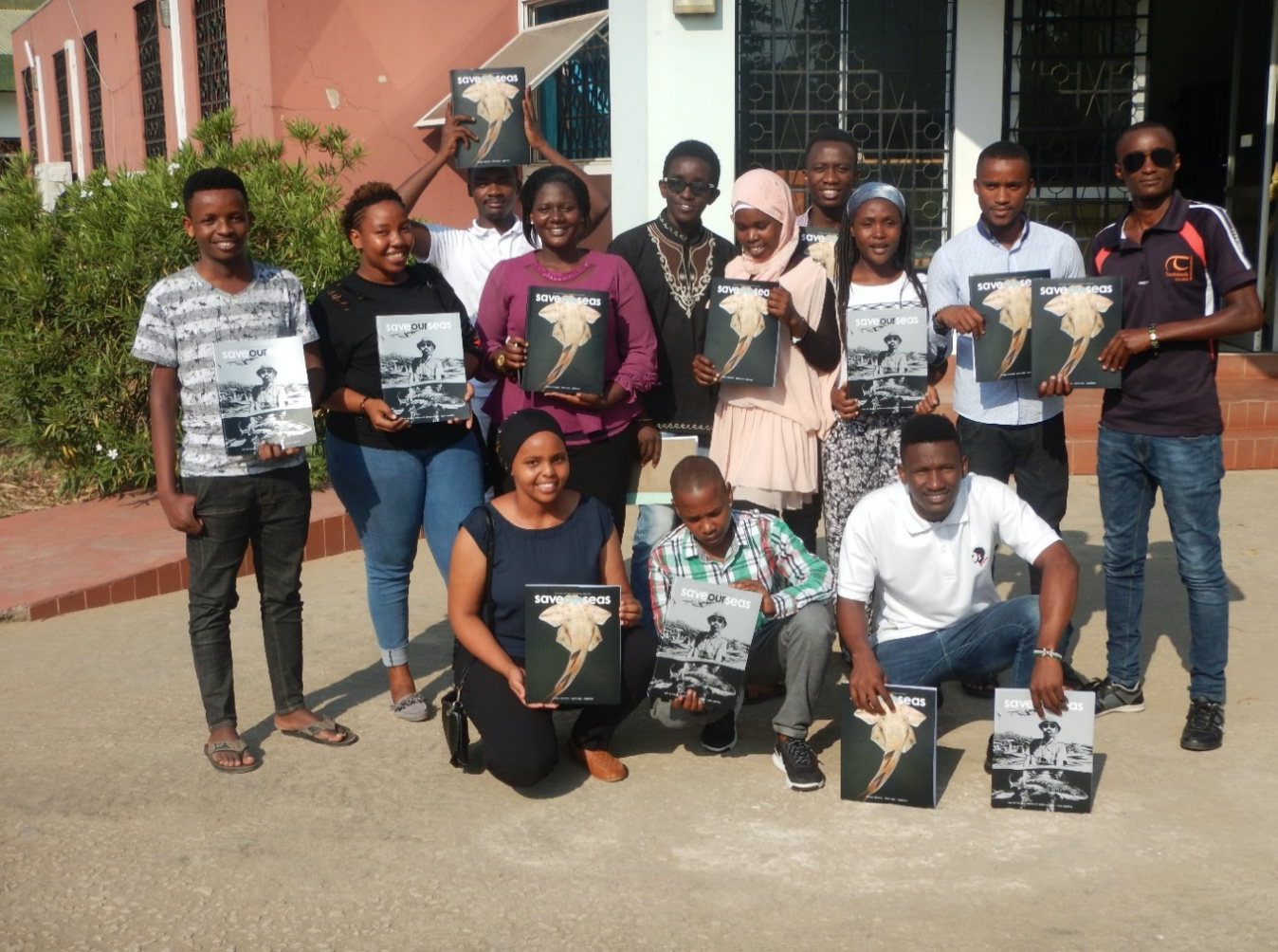 Fishermen and fish vendors were also asked questions and listened to their opinions, some of them suggested there should be no fishing limit, while others suggested ray fishes should completely not be fished claiming that the stocks are rapidly declining. In reality, so far no strong laws enforcement with the intention to protect sharks and rays; it wasn’t easy to lecture both fishers and fish vendors on the importance of sustainable fishing and conservation in order to help the sharks and their descendants. However, some fishermen and vendors seemed to disagree with the enactment of legislation that would regulate extreme sharks and rays fishing or even fishing the juveniles under the pretext that their families would be deprived of food and the family’s economy would be poor. The claims from the fishermen did not differ greatly from the views of the vendors interviewed in the Mwarusembe market, many of whom would prefer shark and rays fishes to be loosed more. 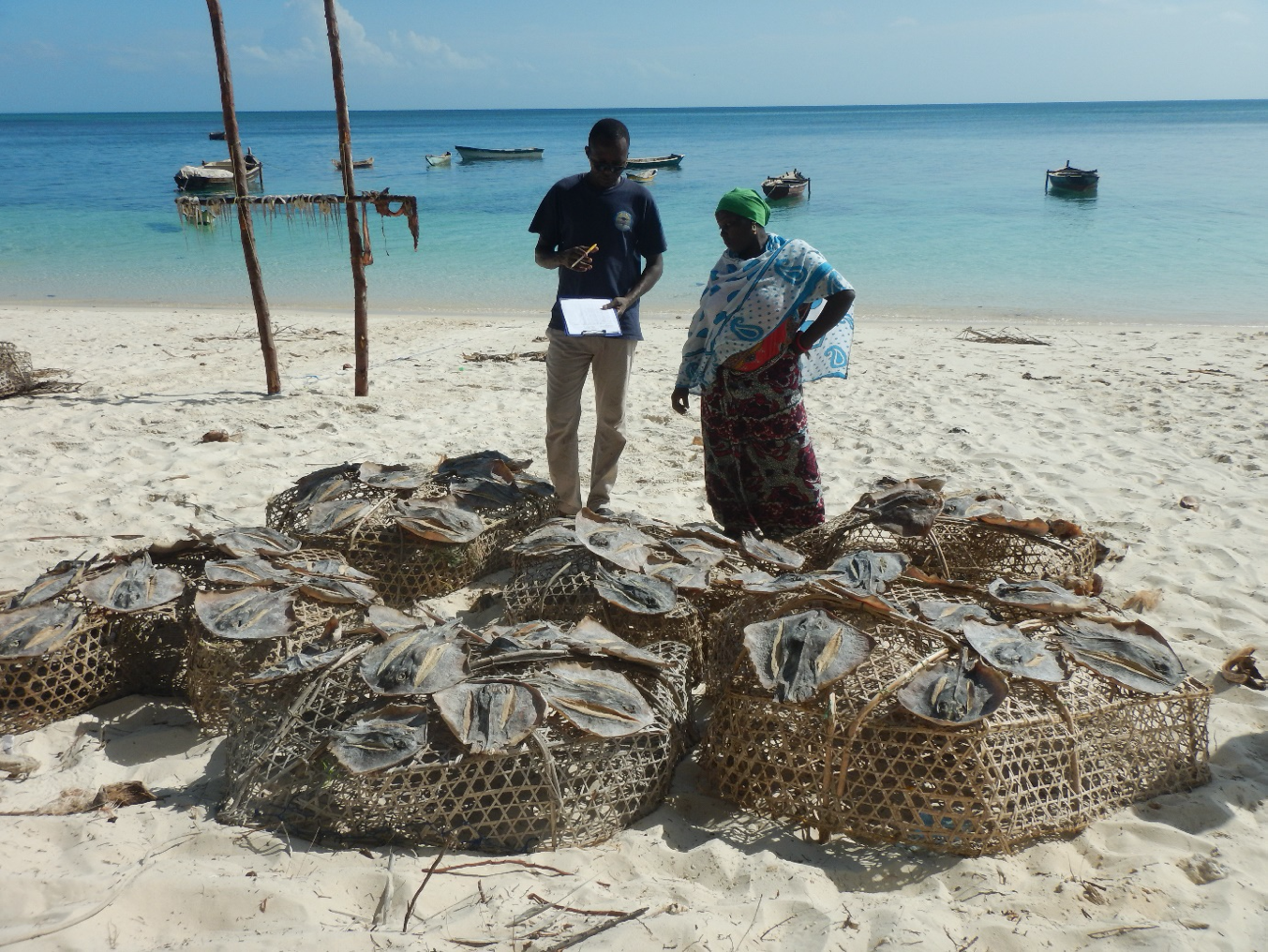 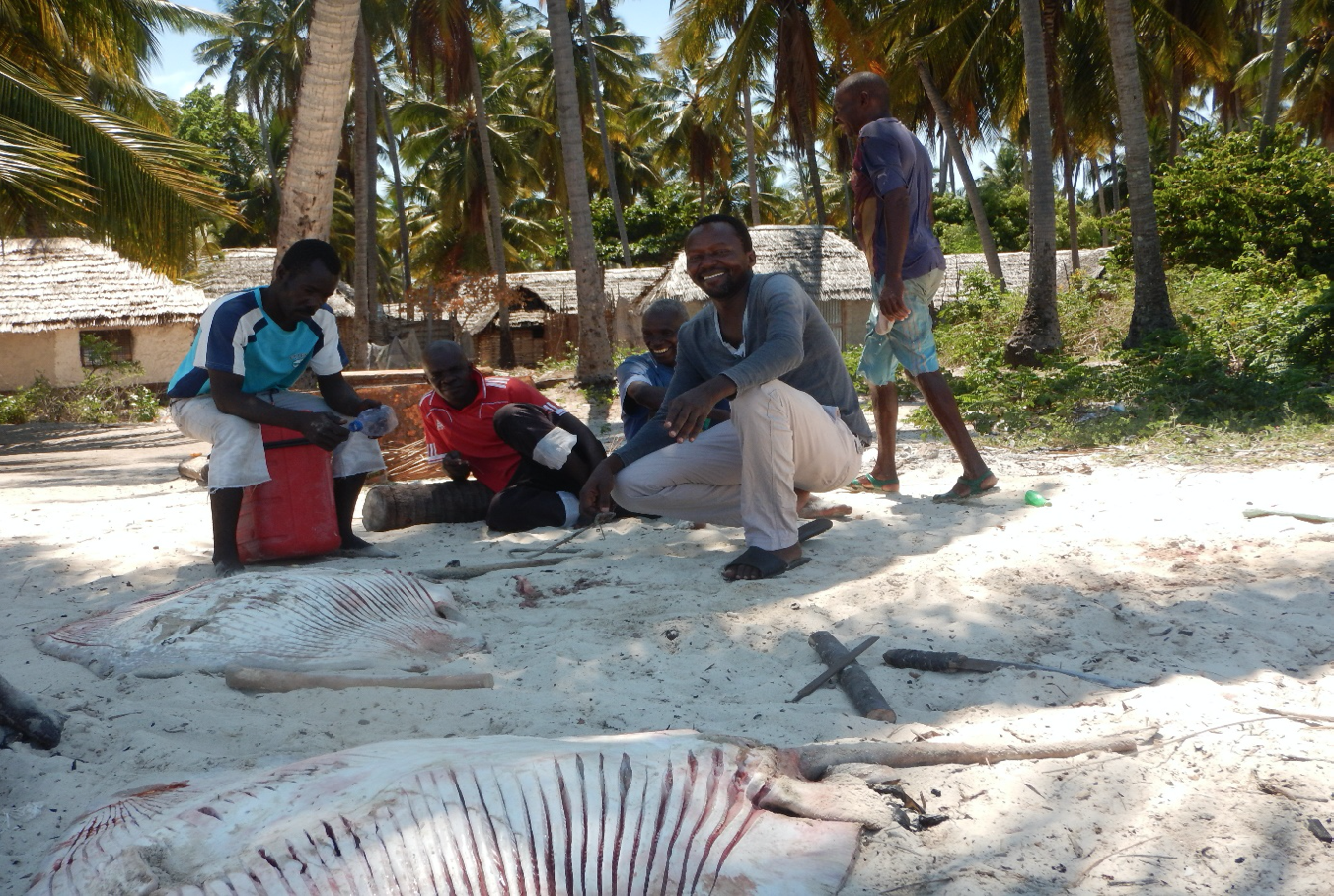 Conversations with some ray vendors. Many of them were unaware of the ray's decline or rise. They also had no idea whether there was a law prohibiting juveniles rays from being fished. Photo © Patroba Matiku 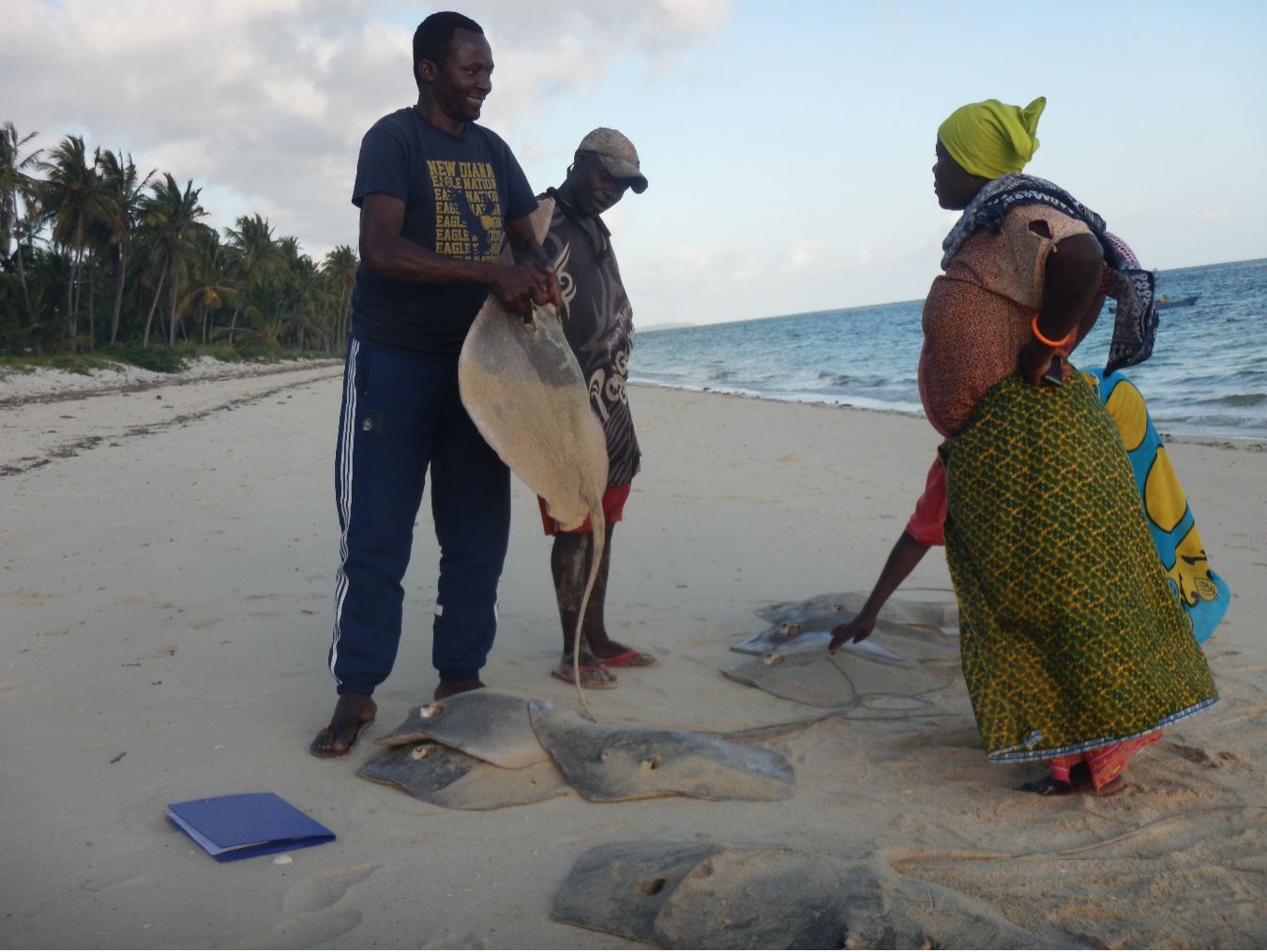 A female fish vendor explaining out the cost of buying, selling and estimating the profit she will earn through selling dried fillets. Photo © Patroba Matiku 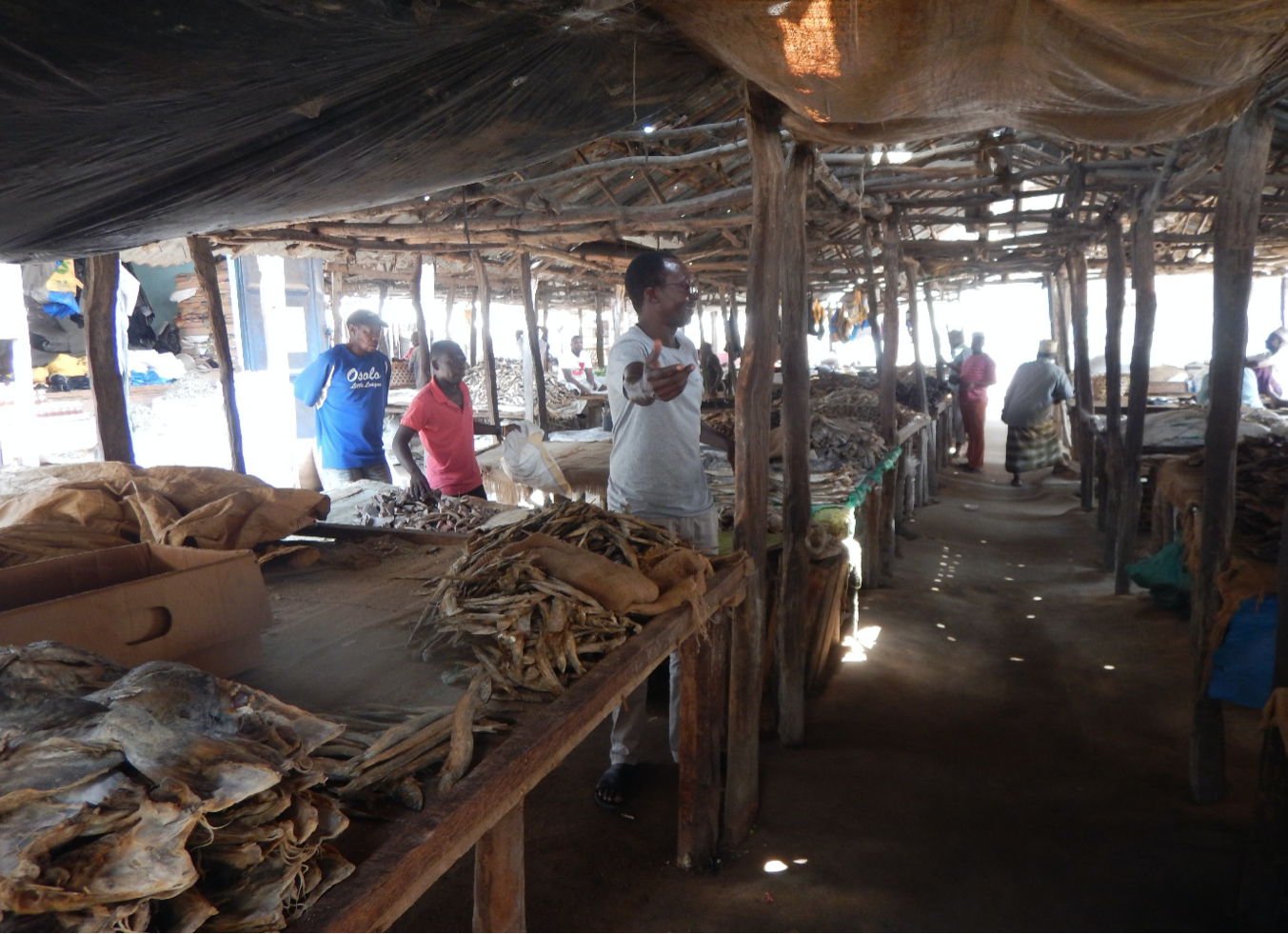 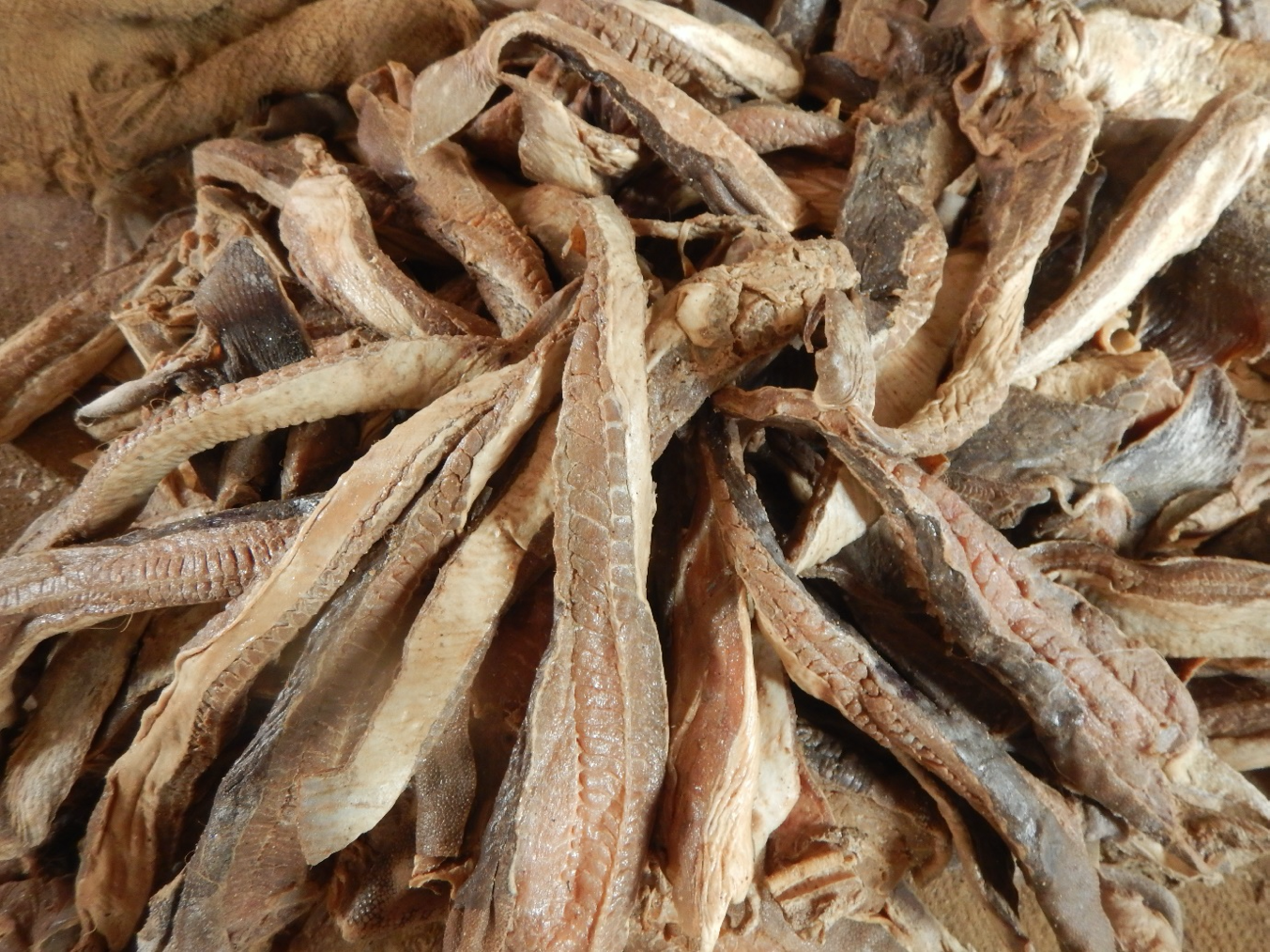 Surveying fish market at Mwarusembe in Mkuranga District to see the final products and talk to vendors. Photo © Patroba Matiku

General observations drawn through interviews with fisheries stakeholders, there was a low level of awareness to all ages and genders regarding to ray fishes biology, overexploitation and even illegality of killing juvenile rays. Environmental education was disseminated to coastal community beneficiaries towards conservation of the ecosystem around Mafia Island. There was no effort to prevent illegal fishing and fishing to a great extent, jeopardizing the availability of rays. Absence and inactive community institutions such as Beach Management Units (BMUs) gives a chance unsustainable and conservation of rays and their habitats.