Out of the lab, into the field

As a shark geneticist at the Save Our Seas Shark Research Center (SOSSRC) in Florida, USA, I don’t get into the field very often. So when an opportunity comes my way to shed my lab coat and head out to the open ocean, I jump at it. Don’t get me wrong; I love what I do. Using genetics to uncover the mysteries of how shark populations evolve and how they are connected is fascinating and rewarding. However, getting up close and personal with a live (and sometimes very frisky) shark is an undeniable thrill!

In mid-May, members of my lab’s Shark Tagging Awareness and Research (STARR) programme, led by Dr Mahmood Shivji and Dr Derek Burkholder, invited me to participate in one of their local education and outreach shark-tagging trips. So just after 8 am, along with a group of 19 biology students from Charles W. Flanagan High School, I boarded the dive boat Sea Siren (kindly provided by the Pompano Dive Center) and headed out into Atlantic waters just east of Port Everglades, Fort Lauderdale.

After Dr Burkholder had given us an introductory lesson about boat safety and the fishing gear, we were ready to fish. The fishing gear consisted of long drum lines. For those of you not familiar with drum lines, this gear basically consists of large, heavy weights, to each of which are attached a long rope tied to an oversized floating buoy and a long, heavy monofilament line connected to a circle hook baited with fish (bonito was on the menu today). Once thrown overboard, the weight sinks to the bottom of the ocean and the attached line with bait floats somewhere within the water column, while the orange float bobs on the ocean’s surface, marking the line’s location. 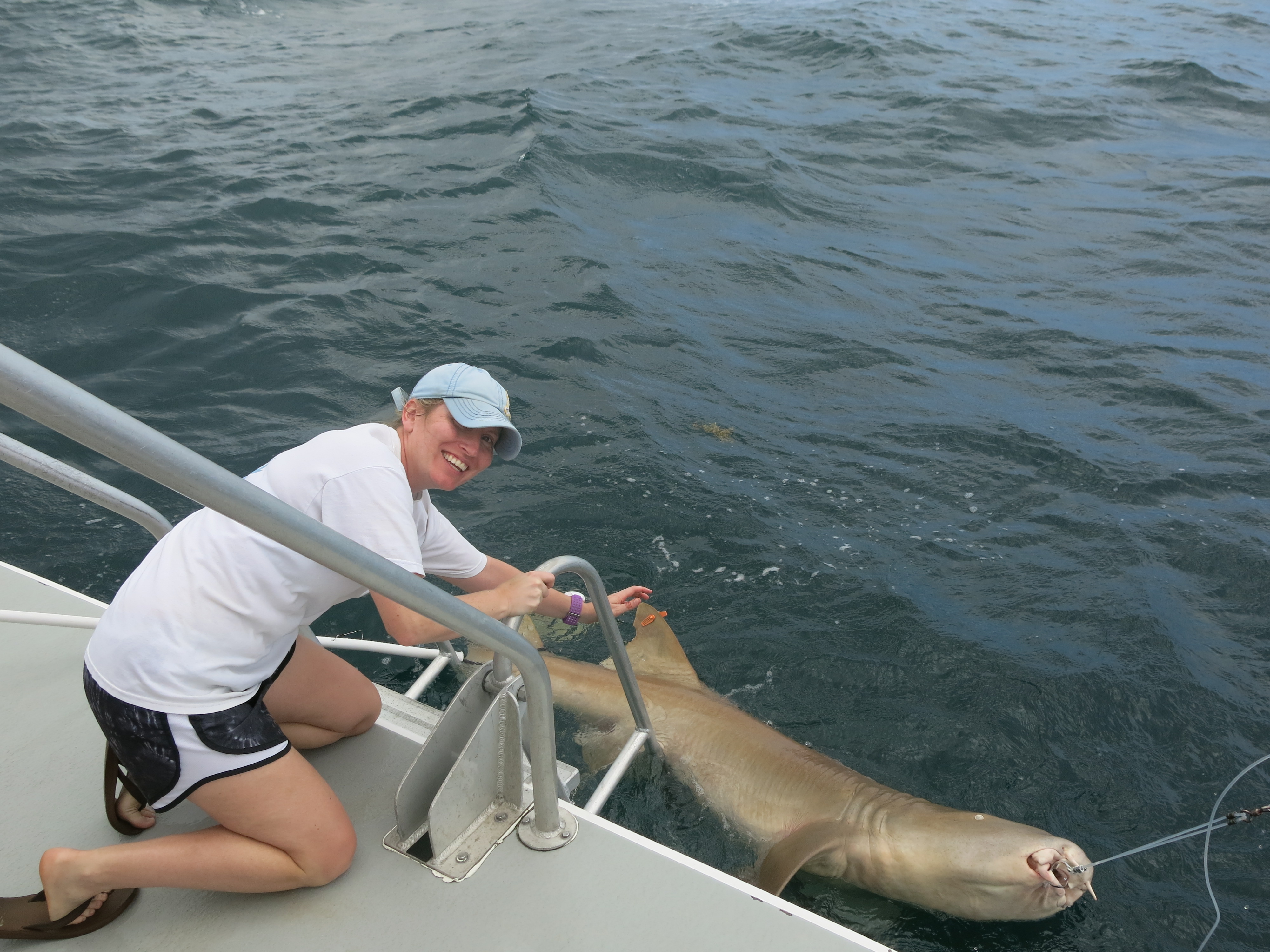 After the gear had soaked for an hour or so – and I had experienced some sea sickness – it was time to pull it in and check what we’d caught. We weren’t disappointed. Our first set of 10 hooks had snagged three fairly large nurse sharks, each one between six and eight feet (1.8 and 2.4 metres) long. If you have ever tagged sharks, you’ll know that some species are pretty docile when caught. An individual will lie alongside the boat with minimal splashing and thrashing and allow a researcher to hang over the side and work it up (measure its length, identify its sex, tag it and take any samples required) relatively easily. Well, nurse sharks are the exact opposite of cooperative subjects. When hooked on a line, a nurse shark tends to roll and spin. One moment it will be on its stomach and the next it will be on its back, rolling and twisting through the water. All this makes securing the animal with a tail rope and taking any measurements a little difficult. Our nurse sharks were no exception! In one case it took three of us to get a rope around the shark’s tail and get the animal to lie upright. It was at this point that I got an opportunity to hang over the back of the boat and hold onto one of its pectoral fins in an attempt to steady it – which, I have to admit, was really great. It had been a long time since I had ventured out of the lab and into the field, and I had forgotten how amazing and beautiful sharks can be up close. 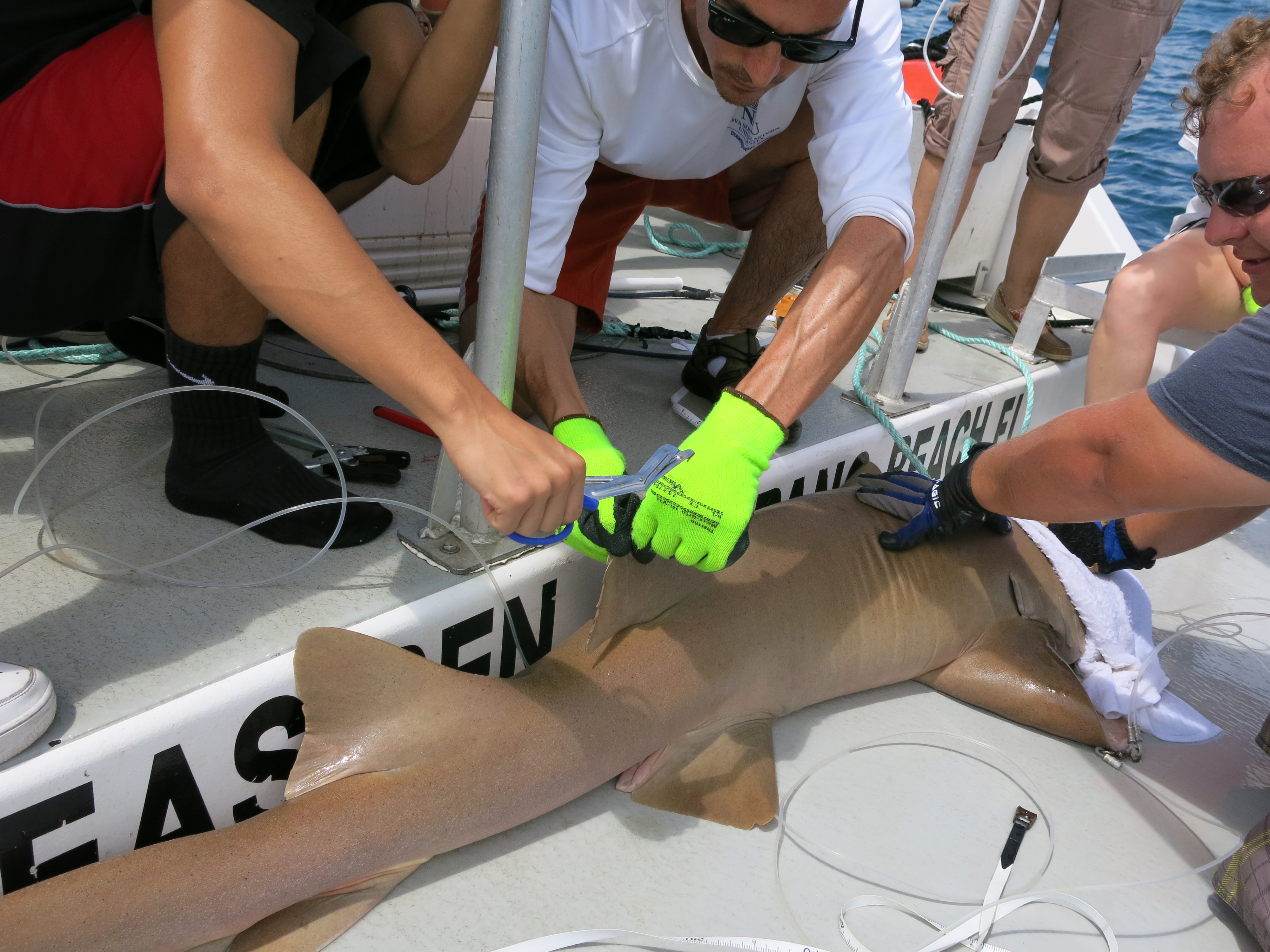 A tissue sample is being clipped from the dorsal fin of this nurse shark for future genetic analyses. © Guy Harvey Research Institute

One of STARR’s mandates, aside from education and outreach, is to collect samples for research, including my own genetics work. So from each of these nurse sharks we took a small tissue sample for future genetic studies. The sample was cut from the top edge of the dorsal fin and placed in ethanol to preserve the DNA in the tissue. This small piece of tissue contains billions, if not trillions, of copies of the animal’s genetic blueprint and is essential to understanding how sharks evolved and how groups of them are related – all of which is extremely important for managing and conserving them. Since STARR began fishing in the waters off Port Everglades one year ago, at least a dozen different shark species, including tigers (my study species), great hammerheads, sandbars, lemons and bulls, have been captured as part of the programme. They have provided a great deal of data that is essential to our work at the SOSSRC. 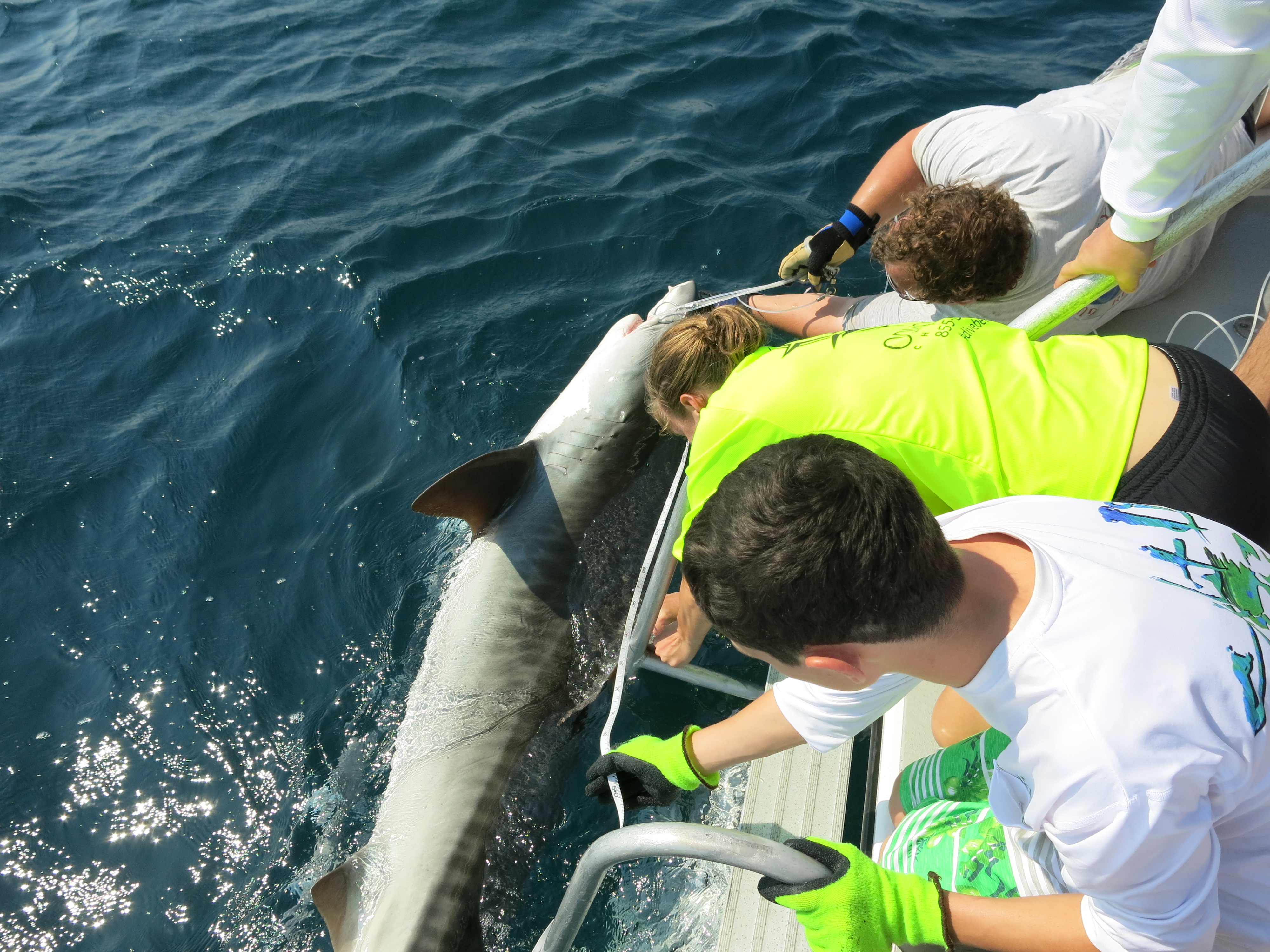 A tiger shark caught by the STARR team being measured and worked up by researchers and high-school students. © Photo by STARR |Guy Harvey Research Institute

We ended up catching four sharks in total – a pretty good haul. And aside from my own pleasure at getting to see and touch some sharks, it was great seeing the faces and reactions of the students who were with us on the boat. Most of these students had never seen a shark before – other than on television – and I felt privileged to be a part of their first glimpse into the world of sharks.

Tiger sharks live in warm temperate and tropical waters throughout our oceans and travel huge distances. Andrea uses genetics to asses which populations are interbreeding and how genetically diverse they are.