It’s always been a dream of mine to see Orcas (killer whales) and yesterday that dream came true, better than I ever could have imagined. Orcas are not commonly seen in False Bay, but over the last year there have been at least two other sightings of a small pod hunting common dolphin. We missed both sightings, but yesterday our luck changed in a big way!

I got a call from Alison Towner of Marine Dynamics asking whether the Orcas in False Bay were affecting our shark activity. Well, I had no idea because I was stuck working behind the computer on my thesis and wasn’t at sea. However, within 15 minutes Morne, Adrian, Brocq and I were all loaded into the car on our way to the boat. As we drove along the coast we saw the pod of Orca chasing a large pod of hundreds of common dolphin. Needless to say we couldn’t contain our excitement and Morne pushed down on the accelerator!

Less than 30 minutes later we were in the boat racing towards the action. I couldn’t believe how far the pod had traveled and by the time we caught up to them they were near Seal Island, over 10 kilometres away from where we first saw them. I can’t begin to describe the joy and exhilaration I felt when I saw that first Orca break the surface. No pictures or documentaries could have prepared me for how majestic and beautiful they were in real life. I had been dreaming of this moment for years.

The Orcas were following behind the pod of common dolphin when we got near them. After gaining some focus again we started to take notes of what was happening. The Orca pod seemed to consist of 4 possibly 5 individuals: two larger ones, one with a distinct hump on it’s back, and two, possibly 3 smaller individuals (will need to check the video footage to make sure). They started to move away from the dolphin pod when all of a sudden I saw the largest Orca breach completely out of the water while knocking a common dolphin into the air like it was a beach ball. Looking back I think the Orcas managed to isolate a single dolphin from the main group and hunted it down. 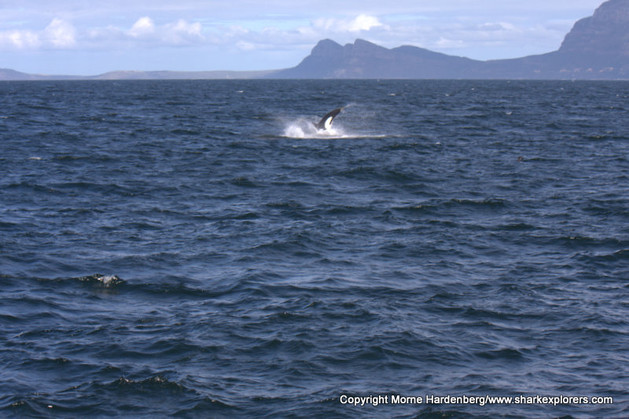 The tail end of the breach that knocked the dolphin into the air more than likely stunning it. Photo © Morne Hardenberg

We kept our distance so we wouldn’t disturb them while they were hunting and feeding, but we did manage to see the dead dolphin being carried by various members in the pod. It took a few minutes, but we got glimpses of the dolphin being passed on and slowly being fed upon. The Orcas seemed to feed under the water a lot. After a while the Orcas started to swim in a directional pattern again. 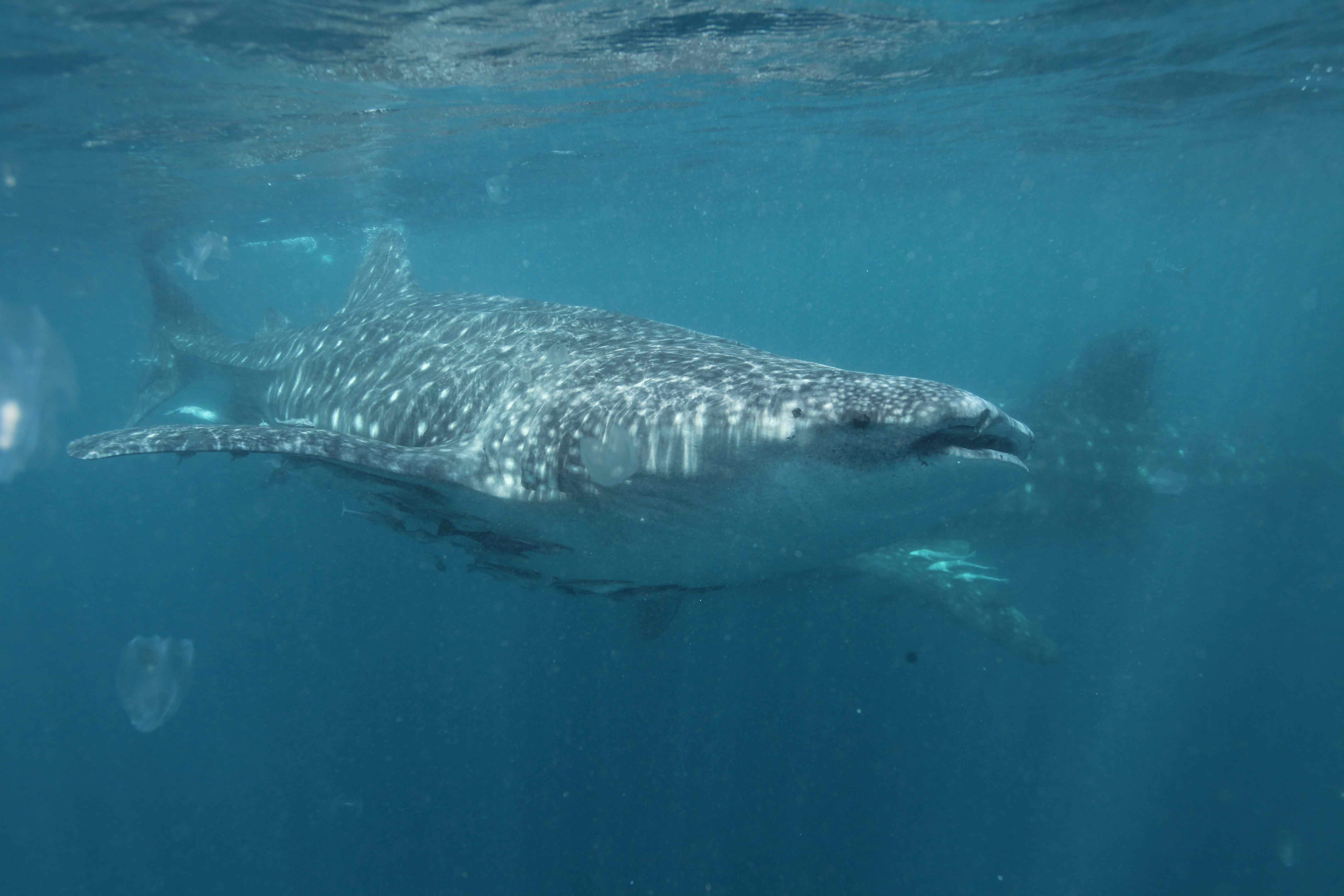 Once they had moved away we noticed they had left part of the carcass and we went to investigate. Adrian lifted the carcass out of the water and we examined it thoroughly. The Orcas had eaten all the good bits and left the skull, rib cage and internal organs, even going so far as to skin the head. A friend of mine Dr. Ingrid Visser studies Orcas in New Zealand has recorded them doing similar things with stingrays. They just eat the wings of the stingray and leave the head and organs. She calls the stingray wings, Orca chocolate. I was impressed by the precision of their feeding. 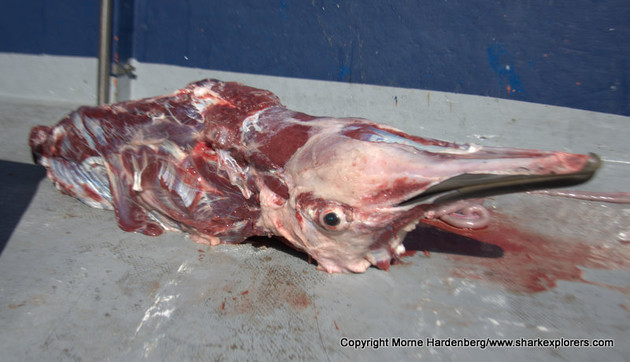 The Orcas ate only the good bits and left the skull, rib cage and internal organs. Photo © Morne Hardenberg

After we had finished examining the carcass we attempted to follow the Orcas again. They were swimming very fast towards the mouth of the bay, perhaps trying to catch up with the dolphins again, but we caught up to them and spent a few more minutes taking photographic ID of their dorsal fins and we were so lucky to have the largest individual approach us where we got a close-up view. It came to investigate us and spent a short time in our wake. After this we had to turn back to base as we only had enough fuel to get back home again. We were sad to leave them, but it will be an experience we will never forget and we hope that they visit us soon again. 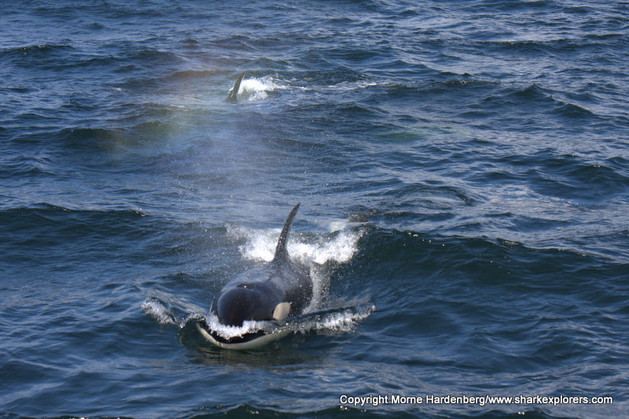 The Orcas swam in our wake for a short while and came to investigate us. Photo © Morne Hardenberg