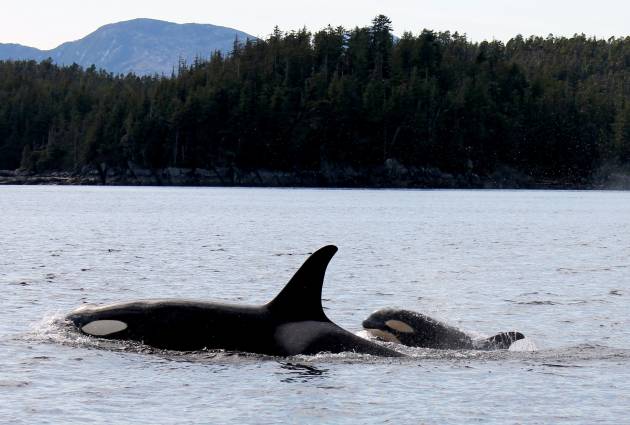 It has been a long, cold and wet winter at Whale Point along the Great Bear Rainforest of BC. We had the first sign that the Chinook salmon were traveling back into our familiar waters with the clicks of echolocation from killer whales on our hydrophone out in Caamano Sound. Chinook is their favorite food source due to their high fat content and size. From the vocal activity we could hear on the under water microphone there was no doubt they had found food. We waited patiently to hear a call that would help us identify which family of killer whales had finally made it back to our research area. After a few squeaks and grumbles, finally there it was, a call we know very well as an A5-N9. The Northern Resident family called the A5s frequently uses this call to communicate with family members or other pods. The history of this family has been one of loss over the years. During 1960s when killer whales from British Columbia were taken into captivity this particular family was hit the hardest with over two thirds of their calves and juveniles either drowning in the nets or on way to aquariums. The ones that were left were most likely traumatized by the experience of loss since these family members would have spent their entire lives together. So when we hear their calls we are reminded how fortunate we are that this acoustic fingerprint that represents their family still exists today. On this day the weather was in our favor so while I checked all the camera gear Hermann canoed out to get our boat that was moored in Taylor Bight. Soon we were on our way with both dogs and ourselves, filled with hope that after all these months we would be seeing our favorite cetaceans. Once we were in visual range of the hydrophone we slowed down and began to scan the area. It was our oldest dog, Neekas that got our attention. She has been a whale dog since she was a puppy and knows when we go out on the boat there is one goal; to find whales. I think it is her keen sense of smell that always points us in the right direction. Sure enough she was right and there they were just 500 meters to the south traveling close to shore. We approached slowly as they were coming in our direction. It was while we were trying to get a proper count to be sure that all the family members were present when we noticed something very small beside a female. We waited until they came up from a dive to get in just a bit closer. There it was again – a new calf! We were so excited as this is just what this family is in dire need of. The mother is referred to as A69 and named Mid-summer, she is now 17 and this is her second calf. This little calf was still bright orange in color, probably only a few months old and looking extremely healthy. After we were able to identify the entire family we traveled back the to lab, both with wide grins on our faces as this observation had definitely made our day. As I type this blog entry we just started to hear this family again on the hydrophone. Yes – the season has started!