Oceanics across oceans from the Maldives to Mexico

The study into the population of oceanic manta rays in the Maldives I am working on is still somewhat in its infancy, so when I was offered the opportunity to join a Manta Expeditions trip to the Revillagigedo Archipelago in Mexico, I jumped at it. I had heard so much about this place over the years from divers, marine biologists and conservationists alike so I was thrilled to have an opportunity to see it for myself. 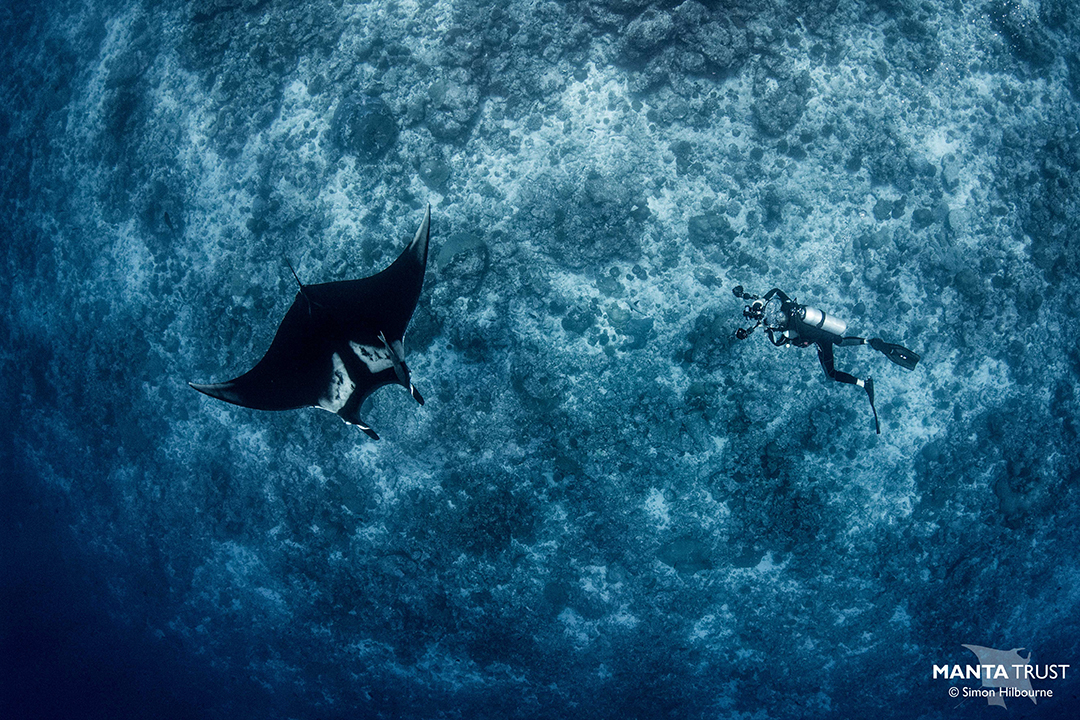 The Maldives is widely regarded as one of the best places on earth to encounter reef manta rays, but more recently a potentially huge population of oceanic manta rays has been found to pass through Maldivian waters, in particular around Fuvahmulah Island. The peak season appears to be just a few short weeks so it somewhat of a rush to collect as much data as possible in a short period before the mantas disappear.

Dr Bob Rubin and Karey Kumli of the Manta Trust affiliate project Pacific Manta Research Group have been studying the oceanic manta ray population in the Mexico Pacific for over three decades and being able to meet some of the ocean giants they study was a real privilege.

During our week of diving in Revillagigedo, I noticed a number of similarities and differences between the populations and study sites. Both the Maldives and Revillagigedo archipelagos are volcanic in origin, but this is far more evident at the remote Mexican islands. The underwater topography in Revillagigedo is stunning. Famous dive sites like Roca Partida and The Boiler have gigantic towering pinnacles with steep striated drop-offs largely bare of corals. Across the seas in Fuvahmulah, the underwater seascape is not as dramatic, a sloping reef at the end of the coral spur is where most of the action takes place. 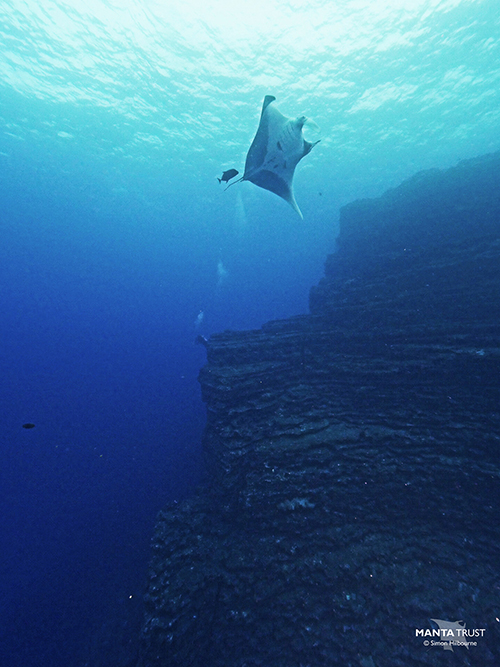 From the data collected by Dr Bob and Karey over the years, it appears the oceanic manta rays are far more resident to the area. Over one-third of the population has been re-sighted and some of those have been seen multiple times over a 20 year period. We ID-ed one individual on three dives at two different sites during our week. This may have something to do with the cleaning behaviour that is sometimes seen in Revillagigedo. The endemic Clarion Angelfish can be seen picking away are parasites and dead skin on the mantas around Revillagigedo. Conversely, over in the Maldives, we have very few re-sightings of individuals; in fact less the 5% of individuals in the database have been seen more than once. Manta rays you see from day to day and even dive to dive, are different. This suggests to us that the population is highly transient and only passing through the waters of Fuvahmulah, rather than sticking around. Although do remember, this is still the early years for our study in the Maldives.

Melanistic or black morph manta rays are the crème de la crème of the manta world. These huge 5-6m jet black mantas look more like something from a top-secret military base than sea creatures. In the Maldives, we have recorded just 15 black morph oceanic manta rays which equate to around 2% of the population. In the Mexican Pacific, the proportion of black morph mantas is closer to 25%. We were lucky enough to encounter a few of these beautiful mantas on our trip, a couple of which are new to Bob and Karey’s database. 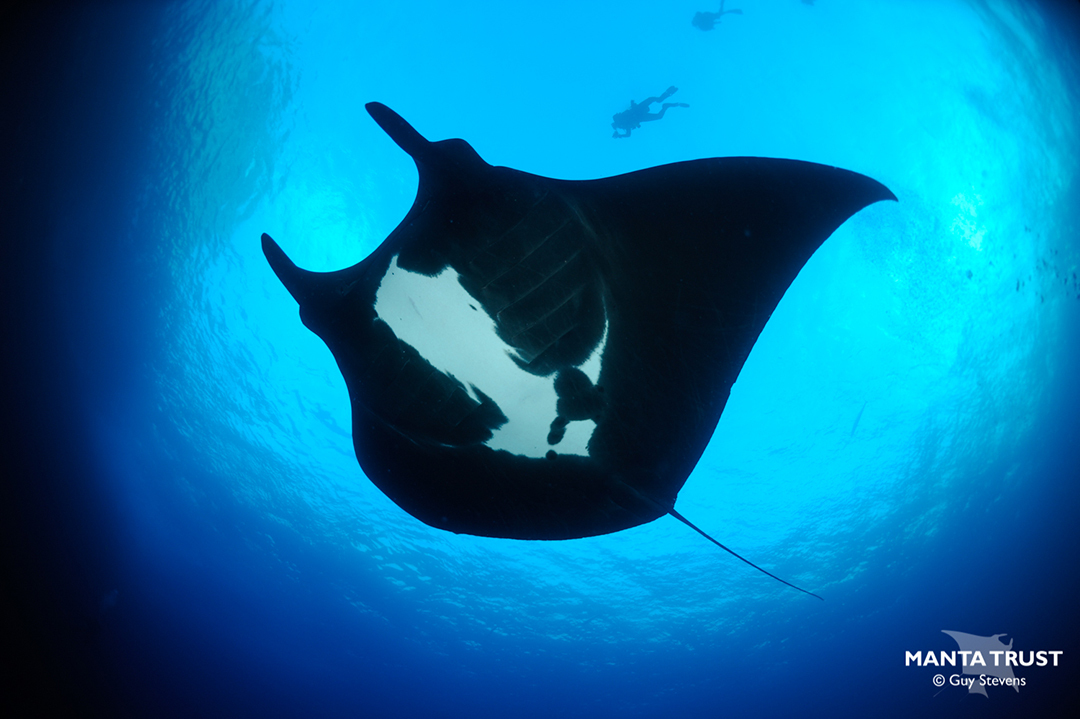 What both sites do have in common though, is a plethora of other sharks sharing the waters. Around Fuvahmulah it is common to see thresher sharks, tiger sharks, silver tips, grey reefs and whale sharks. Over in Revillagigedo, it’s hammerheads, silver tips, dusky sharks, silky sharks, and Galapagos sharks which you will likely encounter. Oh! And then there are the famous friendly bottlenose dolphins. If you ever have the chance to dive with the oceanic manta rays in either of these locations, I’m sure it will be a trip you will never forget! 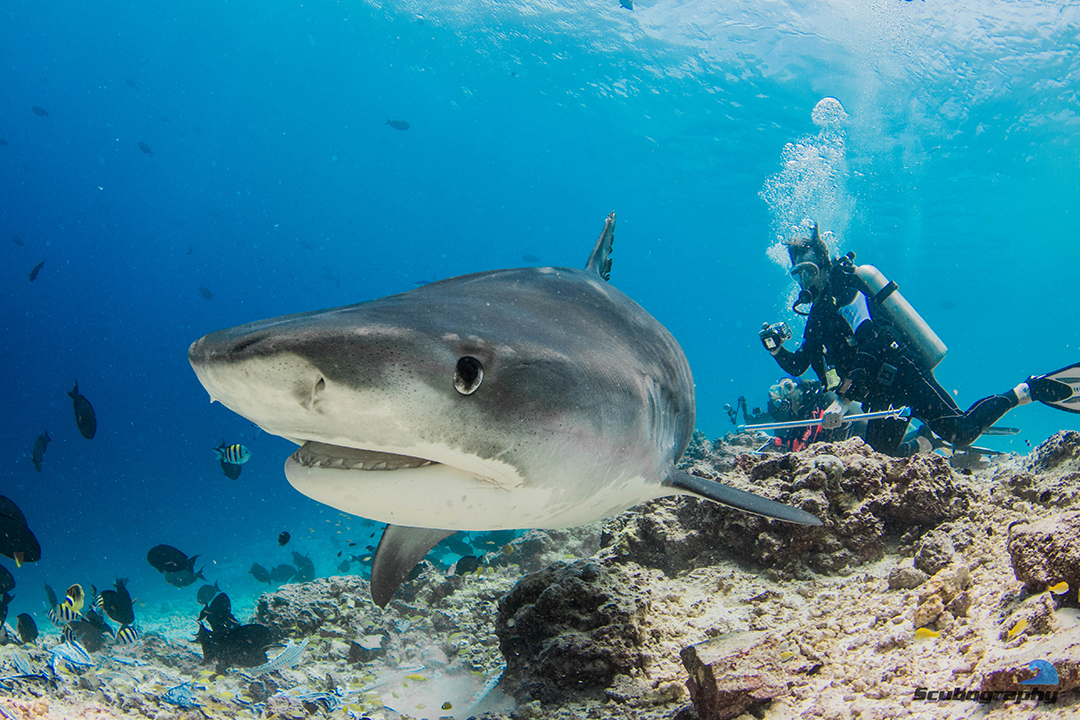 Tiger sharks are common around Fuvahmulah Island in the Maldives. Photo © Simon Hilbourne.