After the first few days of headwinds we were becalmed. We motored sparingly as we only have 30 gallons of diesel for a 7 000 mile passage. I really don’t like being becalmed but you’re not always going to have wind at sea. Luckily we knew we would soon enter the trade winds.

The easterly trade winds do present a problem for our research. It’s hard to slow down the boat enough to drag our Avani net when you have 6-foot seas pushing you along. Forentino gave us one of their shark drogues before we left, which is supposed to be used in heavy weather. We deploy it every day while collecting our samples. Even with a drogue we don’t slow down enough, a few days ago I had to start tying an anchor to the back of the drogue, burying the drogue deeper in the water. It’s rather silly to be down to a third reef and dragging a drogue in 15 knots of wind but that’s the only way we can slow Sakura down to 3.5kts. 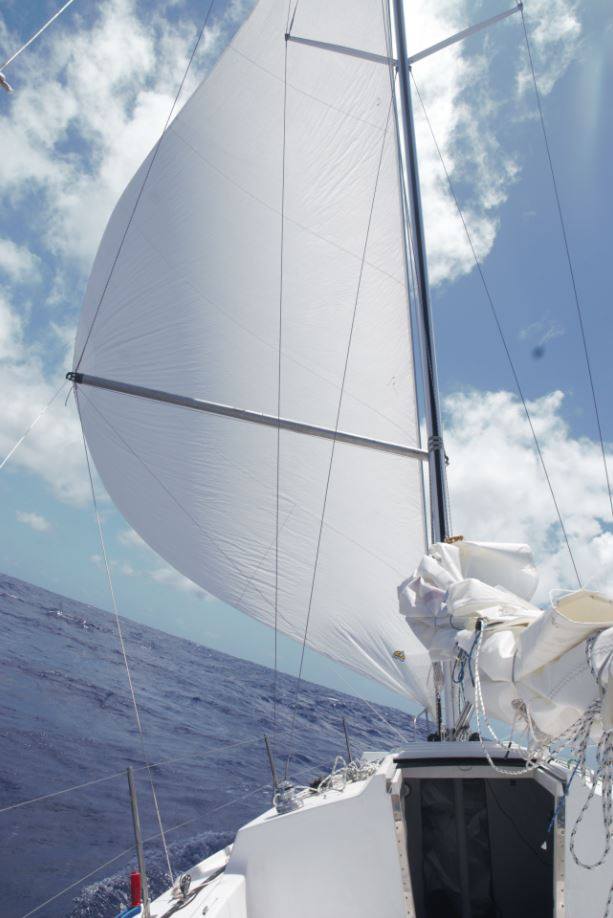 We have accomplished phase 1 of our marine plastics research. Before we left Nicole spoke with several scientists to determine where scientists have and haven’t done marine plastics research in the Pacific. During phase 1 we were trying to find the south-eastern edge of the North Pacific Gyre (Pacific Garbage Patch). We thought we found it few days ago, we had to sample in a southerly direction for a few more days to verify the finding, and now it’s verified.

Phase 2 is a comparative study. We will sail south of the Hawaiian Islands sampling for micro plastics in the trades winds. Most of the research has been done in the known Gyre region, very little has been done in the easterly trades. By collecting samples in the trades, when back on land, we can compare our findings with the known finding in the Pacific Gyre to determine how much of the micro plastics are staying in the Gyre and how much is getting displaced by the trade winds.

We have now sailed 2,900 miles, passed the Hawaiian Islands and we will be halfway across the Pacific Ocean in one week. There is a powerful beauty within the immense desolation of the open ocean. I feel very lucky to be here.